Inside The Chart: Mass Appeal

For the first time in a while, Dave Patenaude heads to a place where everyone else has the accent for a change.

Spend any length of time talking with Patenaude, Georgia Tech’s second-year offensive coordinator, and his New England brogue inevitably leaks out, a survivor of countless changes of scenery during his 30-year coaching career. Patenaude grew up in southeastern Connecticut, about two hours from Chestnut Hill, Mass., where Georgia Tech faces Boston College on Saturday (4 p.m. ET, Georgia Tech Sports Network from Learfield IMG College). His a’s aren’t nearly as sawed-off, but his o’s still have a touch of the Boston-ized “aw.”

“We were down by the shoreline, in the New London area, but my sister went to school in Boston, so we are big Boston people – Sox fans, Celtics in the heyday,” Patenaude explained.

“I am a true blue, New England, Boston fan. Except this weekend,” he added.

Tech’s trip to BC, its first since 2008, will not only reconnect Patenaude with his family roots, but the roots of his coaching career – a career that, frankly, was never part of the plan. Despite being a three-year starting quarterback at Central Connecticut State, Patenaude’s post-college ambitions lay elsewhere.

He still wanted to call games – just not the way he’s doing them now.

“I was a broadcasting major. I wanted to be on ESPN and do that whole thing,” he said.

Even while playing football for the then-Division II Blue Devils, Patenaude moonlighted at CCSU’s student radio station. In the offseason he did occasional color commentary for their broadcasts of basketball and baseball games. He even had an internship opportunity at ESPN in Bristol, Conn., an hour outside his hometown.

“I thought that was what my career path was going to be,” Patenaude said last year. “Then my Mom was ill and I moved back home. My high school football coach was coaching at the Coast Guard Academy and said, ‘Hey, do you want to coach the running backs and make $4,000?’ And I said sure. No problem. I have nothing else going on.

“And that was the end of my broadcasting career.”

While caring for his mom, Patenaude spent the fall of 1991 at the Coast Guard Academy in New London, Conn. He then moved to Massachusetts for a two-year stint as a graduate assistant at Division III Springfield College. Though still a GA, Patenaude was assigned to coach running backs and wide receivers – among other duties.

“There was three full-time guys, 12 GA’s, and that was it. And we did everything. We chopped firewood, we went on the road recruiting, we watched the head coach’s dog. Whatever needed to be done. But it was a great experience because you got to coach your own position,” he said.

Patenaude, ever the raconteur, explained. Springfield’s defensive coordinator plied him and a couple other GA’s to help out on his property.

“When it started to get a little chilly, he had a couple cord of wood. He bribed us with beef stew, a couple of beers and some axes,” he said.

(A cord of wood, for the non-lumberjack, refers to a stack of wood roughly four feet high, eight feet wide and four foot deep.) 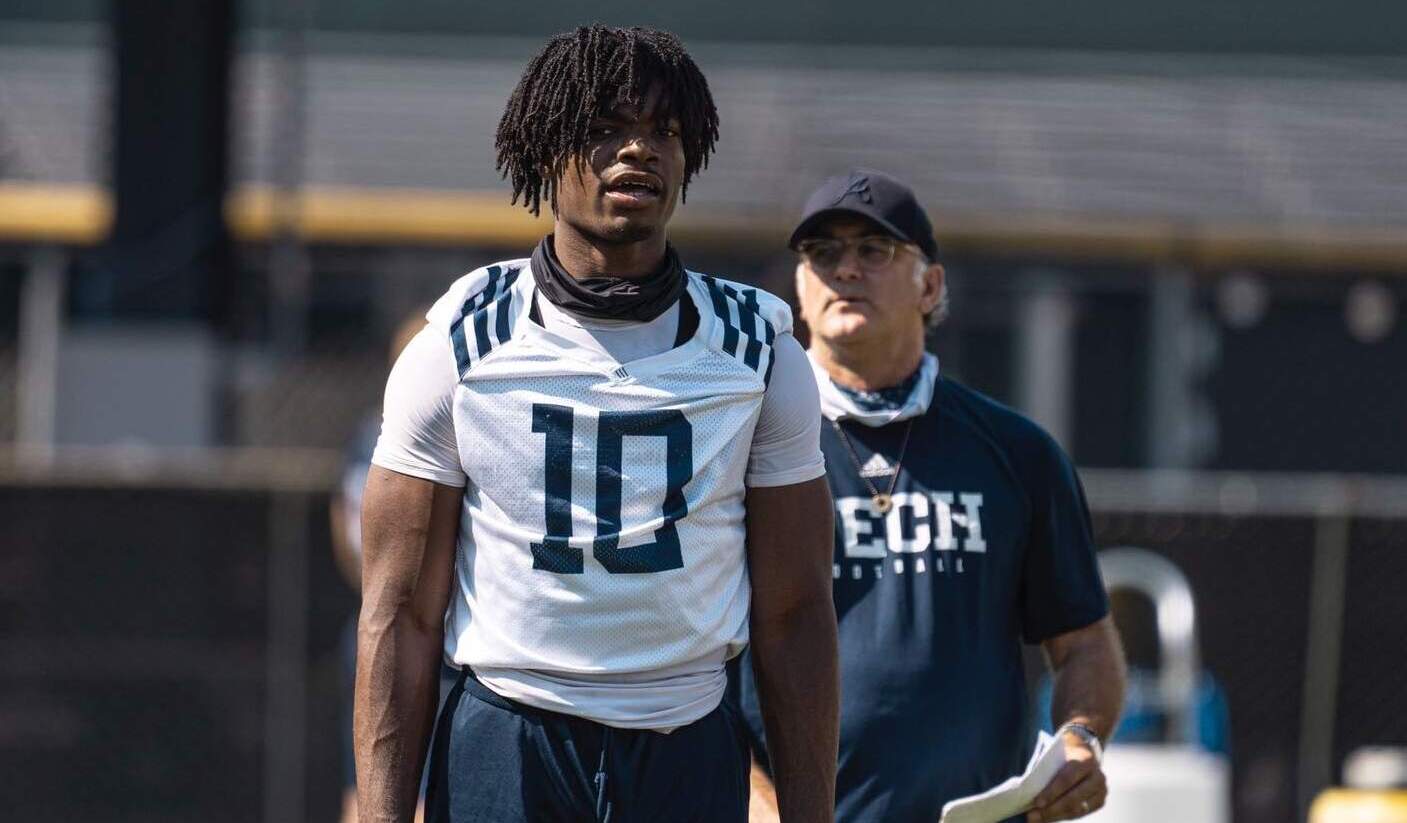 Offensive coordinator/quarterbacks coach Dave Patenaude looks on as freshman QB Jeff Sims readies to participate in a drill during practice.

In addition to roaring fires, Patenaude felt his own passion for coaching starting to ignite. His time in Massachusetts, it turns out, was where his play-calling philosophy first took shape.

“This was in the old days of being a GA where you drew everything by hand. Those guys were tough on you, but I learned a tremendous amount about football and defenses from having to sit there, in the film room, drawing things with an old reel-to-reel film,” he recalled.

After finishing his master’s at Springfield in 1993, Patenaude moved on to his first Division I coaching gig, landing as the tight ends coach at Fordham. Their first team went 0-11. Two years later in 1996, when Patenaude took over at Fordham’s quarterbacks coach, the Rams welcomed in an energetic young graduate assistant named Geoff Collins.

“I thought he was the old man in the room, an accomplished coach. Little did I know he was three years older than me,” Collins joked.

After their lone season together, Collins went to Georgia Tech to join George O’Leary’s staff as a graduate assistant. Patenaude stayed in the Northeast, landing his first offensive coordinator gig at Columbia in 2001. Over the next decade, he established himself as a crafty, malleable play-caller and quarterback mentor at the NCAA Division I Football Championship Subdivision level (he also made one more foray into Massachusetts, serving as an assistant at Holy Cross in Worcester).

Collins followed Patenaude’s career the entire time, including his five years rewriting the offensive record books at Coastal Carolina. He tapped him to serve as his offensive coordinator on his first staff at Temple in 2017; two years later, when Collins needed someone to oversee Georgia Tech’s historic transformation out of the option offense, he didn’t think twice about bringing down the sharp-witted New Englander he first met 25 years earlier.

“He’s just a dynamic play caller, very open-minded to different things. We’ve got a lot outstanding coaches on our offensive staff that bring ideas, and he’s kind of like a chef. He mixes them up and puts the thing together based on the talent we have,” Collins said.

After a first season that had its expected share of bumps, Patenaude’s offense surpassed 400 yards in each of the first four games of 2020. It was Georgia Tech’s longest streak to begin a season since 2011, and its longest to open a season against four-straight Division I-A/FBS opponents since 1999. He’s also done it with a true freshman quarterback in Jeff Sims, who has twice won ACC Rookie of the Week.

The transformation may be ongoing, and Patenaude knows the progress won’t always be linear. But his offense and colorful personality have been a hit with his players.

“People think he’s all X’s and O’s and straight to the point. But he’s a jokester. He jokes around with us all the time. We can talk to him about anything, not just X’s and O’s. You really want that in your offensive coordinator,” said wide receiver Jalen Camp.

Alumni Stadium won’t feature a cheering section of family and friends for Patenaude; Boston College still isn’t allowing fans at its home games due to Massachusetts guidelines related to Covid-19. But Saturday afternoon, in the familiar crispness of a New England fall, Patenaude will try to continue Georgia Tech’s upward climb on offense, following a path that’s uniquely his own.