The preseason No. 15 Yellow Jackets return perhaps one of its deepest rosters in recent history as it prepares to defend its Coastal Division Championship from 2019 after the 2020 season was cut short due to the Covid-19 pandemic. Six of eight position players in the field return for Tech, including 2020 freshmen all-Americans Drew Compton, Stephen Reid and Dalton Smith, alongside preseason second-team all-American Luke Waddell, Colin Hall and Austin Wilhite in the field.

On the mound, the Jackets are even deeper, returning all but one of its weekend rotation from last year (Cort Roedig, Zach Maxwell) and regaining the services of Brant Hurter, Tech’s 2019 ERA leader who missed last season recovering from injury. Also returning are Luke Bartnicki, Sam Crawford, Andy Archer, and Hugh Chapman. 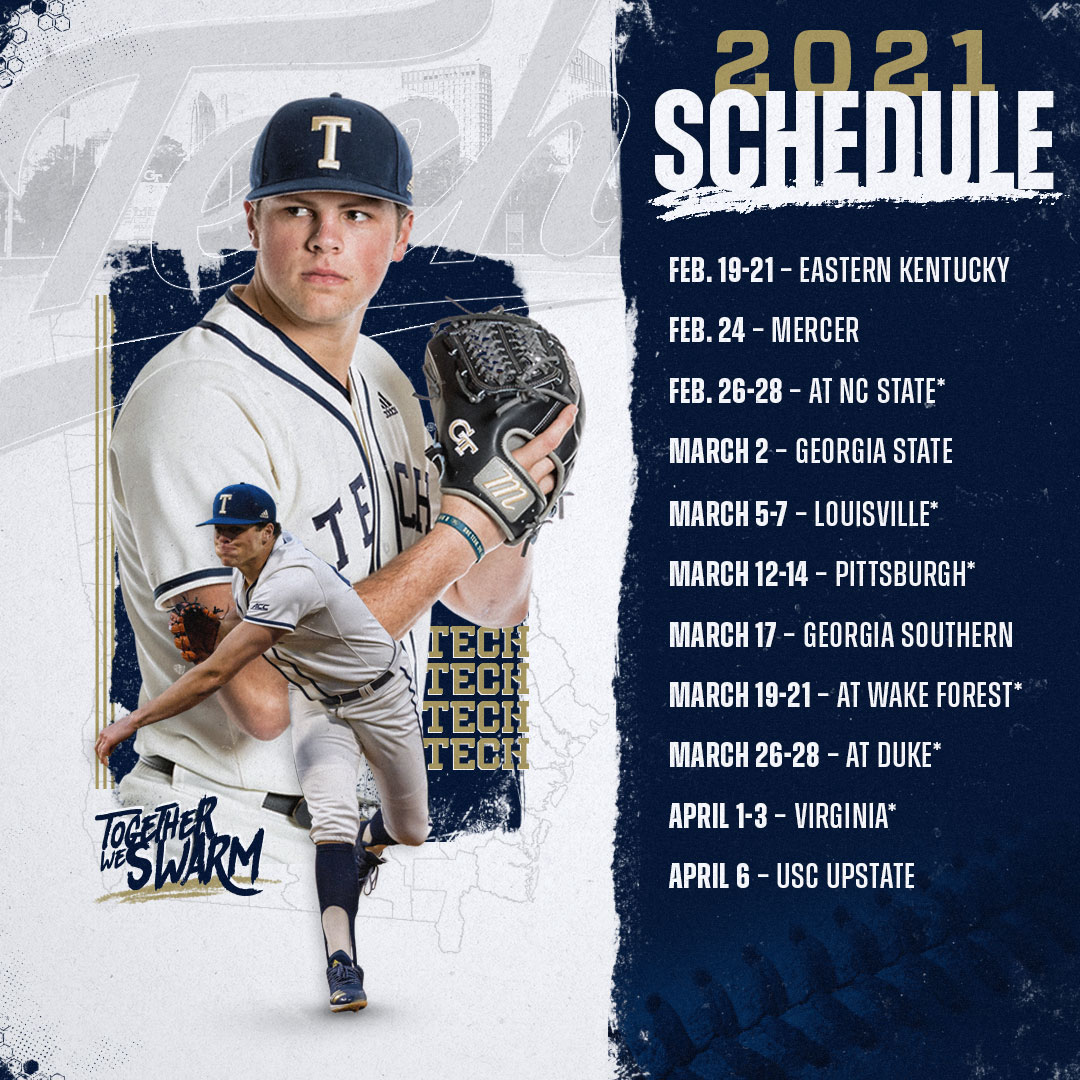 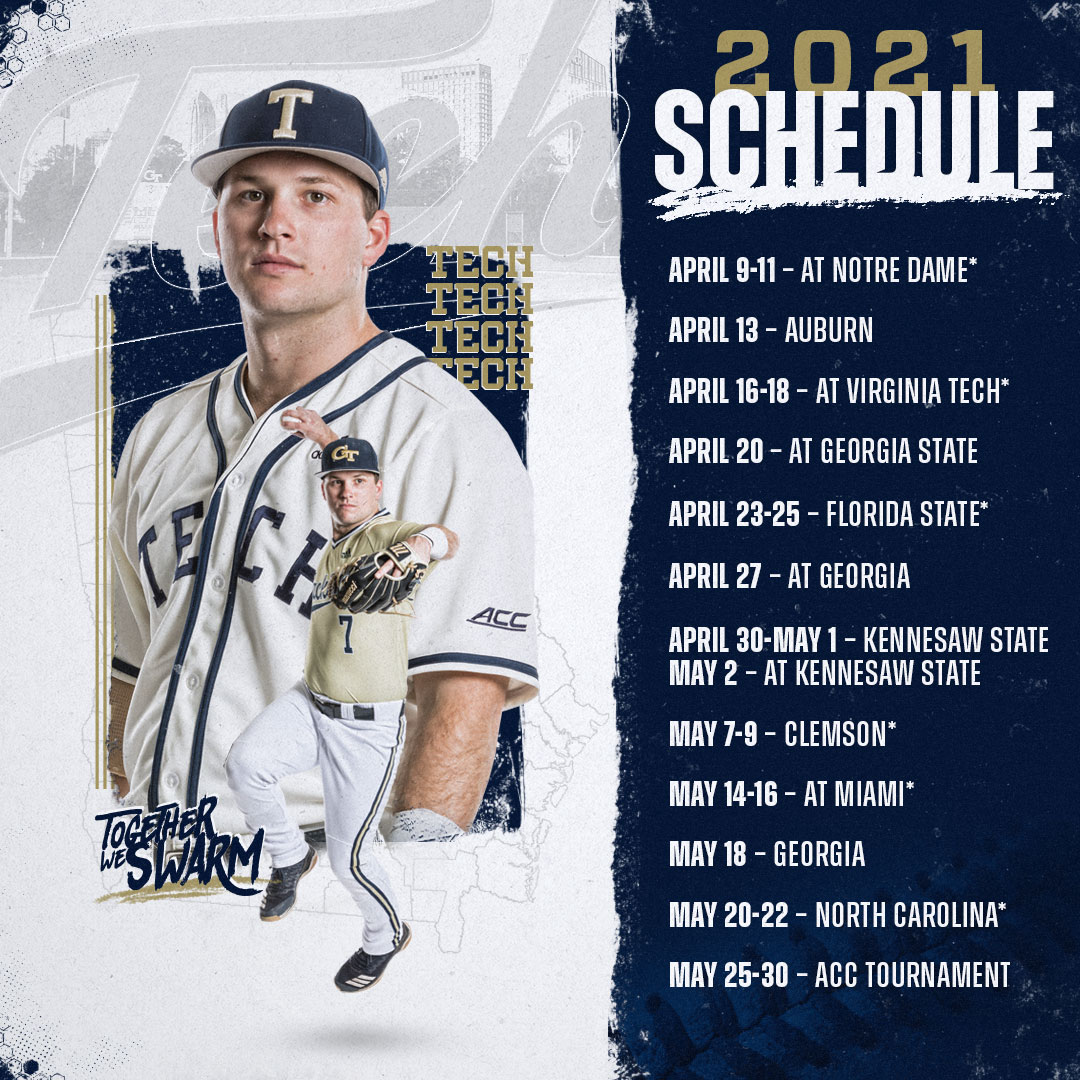 In order to maintain social distancing guidelines recommended by the CDC, Russ Chandler Stadium’s capacity will be limited to approximately 20 percent for the 2021 regular season.

The only way to guarantee a seat at Russ Chandler Stadium is by purchasing season tickets and/or signing up for Georgia Tech’s new premium seating tour and experience. CLICK HERE to request more information on premium seating or call Matt Lanier at 404-385-4407. Season ticket renewals began Tuesday, Jan. 19. New season tickets may be available for purchase after the renewal deadline.

Season ticket members that are unable to attend games at Russ Chandler Stadium are urged to consider redirecting their investment in season tickets as a donation to the Support The Swarm Fund, which was established to ensure that Georgia Tech athletics can maintain its momentum and continue to provide essential services to allow student-athletes and coaches to compete for championships at the highest levels of intercollegiate athletics. For more information on the Support The Swarm Fund, click HERE.

There will be no standing-room only tickets available.

Individuals (ages 2 and up) attending Georgia Tech baseball games at Russ Chandler Stadium are required to wear an approved personal face covering at all times while within the stadium perimeter. Exceptions include when an individual is actively eating and drinking in their assigned seat and fans who have a documented health condition that does not allow them to wear a mask.

Fans with a documented health condition that does not allow them to wear a mask should contact Georgia Tech athletics at gameday@athletics.gatech.edu at least two weeks prior to the game(s) he/she plans to attend to request a stadium clearance. Clearance process requests filed less than two weeks prior to the game (including any requests made in-person on gameday) will not be considered.

Identical to Georgia Tech basketball and football home games, all tickets will be delivered electronically for presentation on the customer’s smart phone for the 2021 regular season. Ticket delivery will not be available via mail nor will fans have the option to print tickets from home. Helpful information and a list of mobile ticketing FAQ’s can be found HERE.

In an effort to maintain social distancing throughout the stadium entry process, magnetometers, or walk-through metal detectors, will be at each gate. All individuals will be required to walk through a magnetometer upon entry to Russ Chandler Stadium.

To further aid in the contactless stadium entry process, a clear bag policy will also be in effect at Russ Chandler Stadium. Bags that are clear plastic, vinyl, or PVC and do not exceed 12” x 6” x 12” will be allowed in the stadium.

For the fifth-consecutive year, all Georgia Tech home baseball games at Russ Chandler Stadium will be broadcast live on ACC Network Extra, bringing in a nationwide audience to 29 games during the 2021 regular season. Fans will also be able to catch Georgia Tech baseball games on WREK 91.1 FM throughout the year.