The recipient of the 2021 NCAA Inspiration Award, Chaunté Lowe will be recognized during the NCAA Honors Celebration virtual awards show on Wednesday night, Jan. 13. The virtual show will begin at 7 p.m. Eastern.

The show will be streamed via the @NCAA Twitter account, as well as on the ESPN app.

The NCAA Inspiration Award is presented to a coach, administrator, or current or former varsity letterwinner who, when confronted with a life-altering situation used perseverance, dedication and determination to overcome the event and most importantly, now serves as a role model to give hope and inspiration to others in similar situations. Lowe is Georgia Tech’s first alumnae to receive the NCAA Inspiration Award. 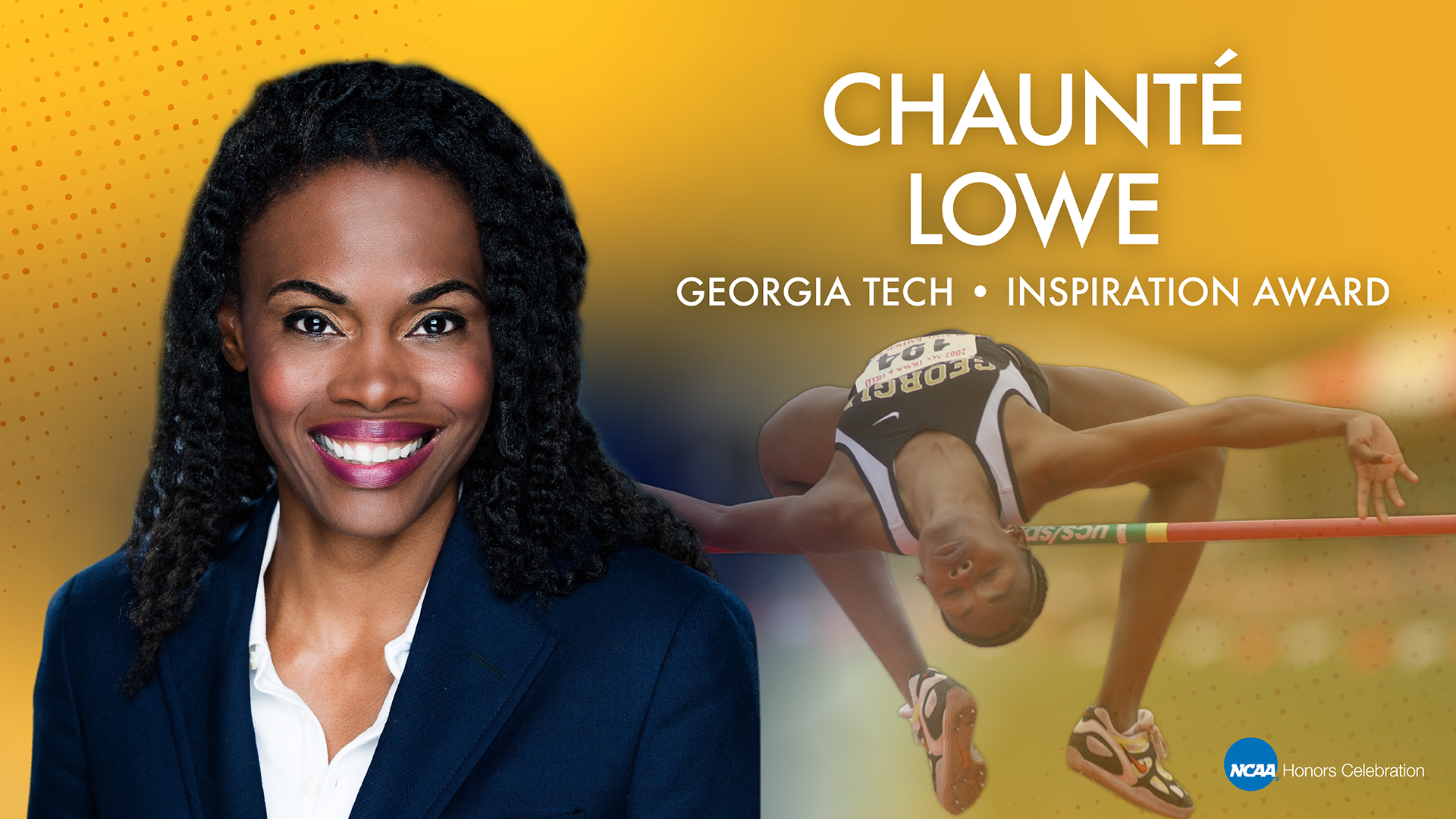 Chaunté Lowe’s first inspiring message went out from her garage. She was in tears, shocked at her breast cancer diagnosis and desperate to warn others of the disease trying to take her life. So she pulled out her phone and hit record.

This moment became Lowe’s mission as she heard from people her message reached.

“My mom was just diagnosed.”

“My dad is on his first day of chemo.”

“I’m 45 and I’ve never had a mammogram but, because I heard your story, I got my first mammogram today.”

These were just a few of the responses Lowe — a four-time Olympic high jumper and a three-time NCAA champion for Georgia Tech — received when she opened up after her diagnosis in June 2019. Those people solidified her “why,” as the 2008 Olympic bronze medalist puts it.

“Those messages started pouring in. And I realized that this story meant something to other people, and they were being moved into action. It was kind of a purpose to keep doing it and keep showing and sharing more because it was actually impacting people in a deep and meaningful way,” Lowe said. “It has defined my why. It has made a whisper turn into a loud roar. It’s made me think, ‘How far can I go? How many people can I reach?’ I think it helped refine my voice. I always knew that I wanted to impact and help other people but didn’t necessarily know how.”

Millions have now heard or read about Lowe’s battle against cancer, which started with her finding a tiny lump in her breast in 2018 while doing a self-examination. Her first doctor did not diagnosis it as cancer, however. A year later, she felt the same area and the lump felt bigger and she sought a second opinion. What followed was a diagnosis of triple-negative breast cancer, a double mastectomy and six rounds of chemotherapy.

The 36-year-old is now cancer-free and working toward a fifth Olympics. She’s continued to share her story however she can in order to raise awareness and provide hope to others. She specifically wants young people to take their breast health seriously, especially during a pandemic, when many are skipping routine checkups and screenings.

Now she’s being honored as the NCAA’s 2021 Inspiration Award recipient. Lowe will be given the award during the virtual 2021 NCAA Convention.

Before the pandemic and between rounds of chemotherapy, Lowe traveled the country on speaking engagements to share this message. She often did five of these a week. She made stops at the headquarters of Instagram and Facebook. She accepted any and all interview requests, including an appearance on “The Today Show.”

She’s grown even busier during the pandemic. Virtual speaking opportunities have poured in. She’s continued to use her social media platform as much as possible, too, like she did during some of her toughest chemotherapy periods.

“I realized I could share resources and connect other people going through similar experiences, give them a sense of community,” Lowe said. “I really miss seeing people face to face, but I love that I’m able to meet more people and share my story more often.”

Lowe said her story of beating cancer directly connects to her student-athlete experience, especially when it comes to facing a challenge.

“I think that when (I was diagnosed), I was put in a position where I had to face my most difficult fear head on and try to figure out a way to win. It’s kind of weird to describe it as a win-lose, but to me, being able to be here for my kids and surviving this thing was the win, and losing wasn’t an option,” said Lowe, a mother of three. “What I learned is that there’s a lot inside of me: How I tackle difficult situations and how I learned all those skills as a student-athlete, and how to strategize and plot to put myself in the highest likelihood of success doesn’t just apply to sports. It transcends sports and can be as relevant as facing your deepest, darkest fear.

“That’s what I try to instill in other people who may not have had the NCAA athlete experience, who may not have had to figure out a process to successfully work through difficult challenges, and I try my best to articulate, inspire and show them how to do that because it’s something that’s really relevant.”

Lowe also found parallels between her recruitment out of high school and one of her first reactions after being diagnosed with cancer. As a talented high school recruit, she was searching for the “total package” in a college. Everything from coaches to facilities to academic support was on her list, which brought her to Georgia Tech.

The eight-time outdoor national champion followed the same process when she was diagnosed with cancer. She assembled the best team she could find, including oncologists, surgeons and dietitians, while partnering with organizations like Susan G. Komen and the American Cancer Society.

“The first thing I wanted to do was assemble a team that would help me get to the outcome that I wanted,” she said.

The second thing was developing a plan. In college, Lowe’s plan included becoming an NCAA champion, breaking the school record, making the U.S. Olympic team and earning a degree. She did all that and more, becoming the American record holder and three-time world champion.

Her latest plan focused on beating cancer and raising awareness specifically around breast cancer. Again, she’s done both and more. She has touched millions of lives and potentially saved a few along the way.

All of it has given her a newfound focus and drive to make the Tokyo Olympics, which were delayed until the summer of 2021. This gave Lowe needed time to gradually return to a world-class level.

“It was extremely difficult and very humbling. It was to the point where I could probably walk a mile faster than I could run,” Lowe said of training after her surgeries and chemotherapy. “It was awful. Every day I’ve been clawing just to gain a little bit of ground, and I’ve been seeing those moments where I’m, like, ‘Yes! It’s going to happen.’ But it’s a long process that takes a lot of patience. I’m grateful that the Olympics was pushed back. I needed a little bit more time.”

While the physical and mental challenges of trying to return to an Olympic level after multiple surgeries and chemotherapy have been daunting, she thinks her purpose is stronger as well.

“I’m a different person than I was at the other Olympics. I was uber-competitive, very petty when it came to wanting to win, and I think that’s what made me a really great athlete,” she said. “But this Olympic campaign is rooted in love and selflessness. It’s really about the well-being of women, people in general.

“This one will be with a newfound appreciation for life.”