THE FLATS — It’s been 61 years since “Clean, Old-Fashioned Hate” was settled over a weekend in a month other than November.

Baseball’s last three-game, weekend series against Georgia was March 6-9, 1959, not only predating the Danny Hall Era at Georgia Tech, but nearly predating Head Coach Danny Hall, period — he was four years old the last time the Yellow Jackets and Bulldogs went toe-to-toe in a weekend set.

The series has been more of a trio of midweek flash points, breaking up the season staggered as they’ve been, and has relegated the weekend rotation to cheerleaders.

That changes Friday. The No. 17 Yellow Jackets (8-1) and No. 4 Bulldogs (8-1) face off Friday evening at Foley Field in Athens (first pitch at 5 p.m.), then Saturday afternoon at Russ Chandler Stadium (a 2 p.m. start) and concludes Sunday afternoon at Coolray Field, the home of the Gwinnett Stripers, the Atlanta Braves’ Triple-A affiliate (also a 2 p.m. start time).

No extra incentive is needed, but letting the weekend rotations go mano-a-mano has added some juice to this year’s series. So without any further ado, let the pregame talking begin.

“I think it takes out the, ‘Oh, we’re facing your B pitcher,’” said redshirt senior right-hander Jonathan Hughes, who’ll open the series. “We have a weekend series. We have our three arms vs. their three arms. We have their team vs. our team. I’m happy to go guns ablazin’ on them.”

“I like it, actually, because last year, Georgia could always possibly pull that, ‘Oh, it’s a midweek game,’ card, ‘We’re not starting our best three,’” he said. “This weekend, it will be a true result to see which team is on top on the weekend.”

Even those new to the rivalry can’t wait to get at it.

“I’m really excited,” said freshman righty Zach Maxwell, Sunday’s starter. “I know they’ve got good guys, we’ve got good guys and I’m ready just to go after them, get the ball and go. I don’t really think too much about it.”

“I think ultimately that’s what you want as a fan, that’s what you want as a team, your No. 1 against their No. 1 and just see who comes out on top,” said Borrell, who’ll get his first taste of the Georgia Tech-Georgia rivalry after having spent the past 18 years entwined in the Yankees-Red Sox rivalry, MLB’s version of this Hatfields and McCoys blood feud. “I can’t wait. I’ve heard great stories. I’m just going to enjoy it. I’ll be as nervous — probably more nervous than the kids will.”

If the beginning of the season is any indication, Borrell might not be THAT nervous. Tech’s pitchers, especially the starters, have been fearless. Starting pitchers are a combined 4-1, with a 3.06 ERA (10 earned runs in 29.1 innings, allowing 16 hits, with a better than 2:1 strikeouts to walks ratio (32K’s vs. 15 BB). As important, they’ve allowed only one first-inning run, allowing the offense to establish a lead.

It starts with Hughes. The 6-2, 198-pound, righty who overcame Tommy John surgery that cost him the end of his freshman year of 2016 and most of 2017, is the Friday night guy after a 2019 season in which he recorded a team-high-tying nine wins (tied with Connor Thomas), good for third in the ACC, coming out of the pen. He was durable, making 26 appearances (topped only by Bartnicki’s 29). He’s relishes the opportunity to set the tone every weekend.

“I love it,” said the Flowery Branch, Ga., native. “For the past years I’ve been here, I just wanted to be a guy that can contribute to the team in the biggest way possible. If that way is the Friday guy and being that leader on the mound to get us going on the weekend, stuff like that is something that I’m really happy I can do.” 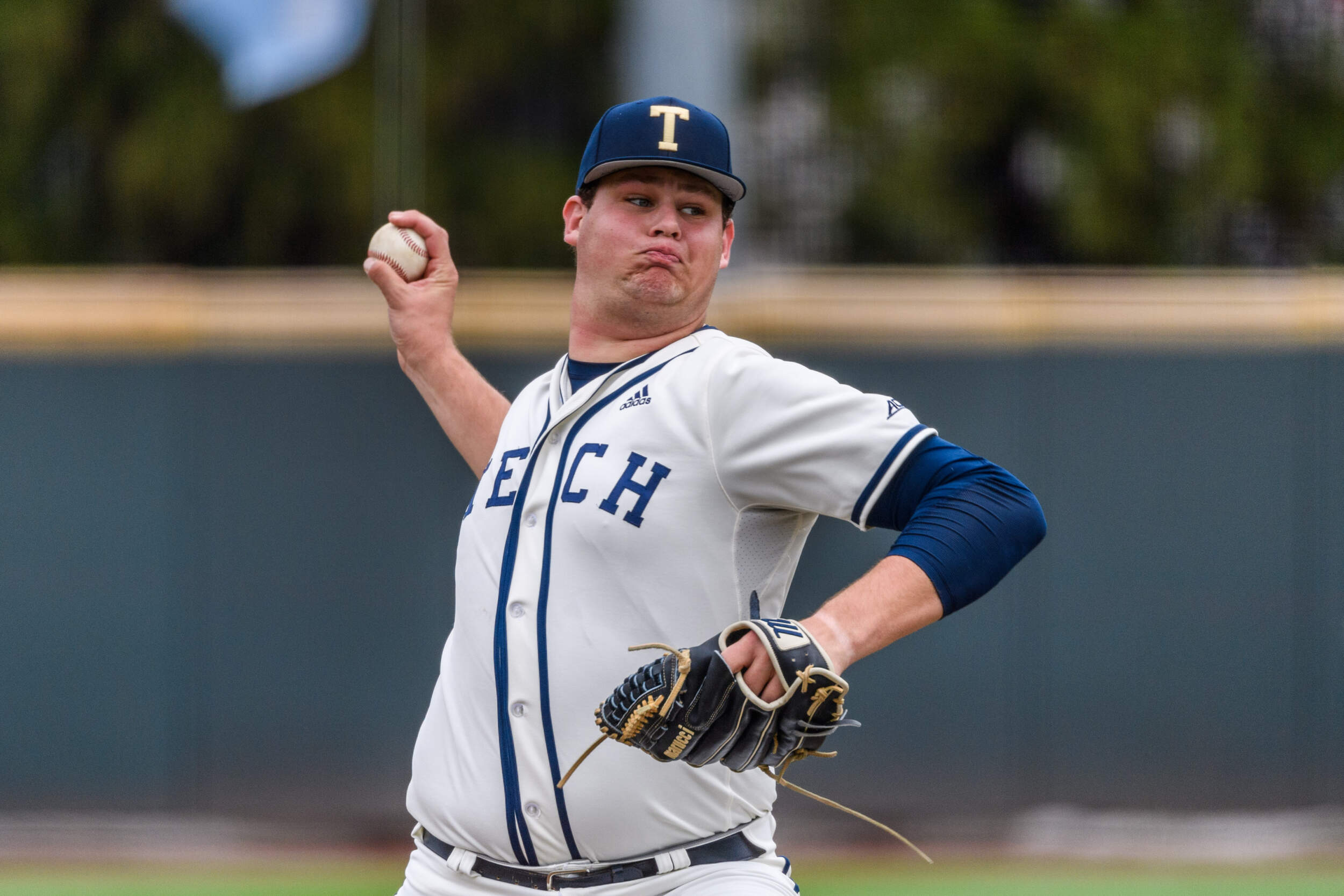 The Jackets are happy with what Hughes has done. He’s 2-0, with a 3.28 ERA, with seven strikeouts vs. three walks in 10.2 innings. But two of those walks and three of his earned runs came in the sixth inning against Ohio State, with the game at 11-1. Against Cincinnati, he allowed a leadoff triple and a run to start the game, then he pitched shutout ball, retiring his final seven hitters in the 6-4 win. “You want a table-setter for your staff,” said Borrell. “When you have a fifth-year senior out there, you pretty much know what you’re going to get. He’s going to throw strikes, he’s going to mix his pitches.”

Roedig has been perfect to follow Hughes. The 6-2, 192-pound righty was 2-2 with a 4.88 ERA, last season as a freshman, but had success against UGA at SunTrust Park. He also had strong outings in the ACC Tournament Championship Game (4.1 IP, 1 hit, 1 earned run vs. North Carolina) and the Atlanta Regional (4.0 shutout innings, on 2 hits in the final game vs. Auburn). All that has made him much cooler on the mound as a sophomore.

“Last year my biggest thing was the nerves,” said the Orlando, Fla., native. “But working in the postseason, pitching at SunTrust and all those things kind of helped me settle into my position here at Georgia Tech and just really helped me keep a calm mind when I’m pitching.”

“Cort’s been doing great coming in and being that strong guy to feed to that Sunday game,” said Hughes.

Maxwell has taken over the Sunday spot. It’s been bang, bang, Maxwell’s yellowhammer — and high-90’s fastball — coming down upon the heads of opponents. He shutout St. Peter’s over four on Opening Day, as the third true freshman in program history to start a season opener, then on Sunday, against Ohio State, the 6-6, 245-pounder from Acworth, Ga. — Zach’s dad actually played college hoops for four years at Idaho State, although Zach admitted he was never attracted to basketball — generates plenty of power.

In two starts, he’s allowed one run and two hits over 9.0. He’s struck out 13 while walking eight, with two hit batters. Against Ohio State, he struck out the side on 13 pitches before wildness in the second resulted in a hit batter, a wild pitch and a walk before an RBI single and another walk. But he settled in, allowing only the one run, then mowing down nine of his final 10 hitters.

“He definitely was better than he was last week,” said Hall. “He set the tone early. I mean he struck out three guys in the first inning. I felt like he was in real good control all day other than the one inning, which is going to happen from time to time. He’s a guy who should get a lot better the more he gets out there.”

Maxwell credits his resilience on simply doing his job and not overthinking it.

Maxwell was given a second life Sunday, as the Jackets plated three runs in the bottom of the second to regain the lead. Especially big was shutting down the Buckeyes in the third.

The shutdown inning has been a priority for the Jackets.

“That’s what we want to do. We’re trying to get through our innings quickly,” said Borrell. “When our guys put up runs, our job is to put up a zero right after. The guys have been great so far.”

The starters have been better than great. They’re a perfect 10-for-10, 12-for-12 if you include midweek starter sophomore Luke Bartnicki — the staff as a whole is 23 of 27, 85.2 percent. Weekend starters have allowed two-or-fewer earned runs in four of their six starts (Bartnicki makes it 6 of 8) and rolled through Ohio State, allowing five earned runs in 16 ⅔ innings (a 2.70 ERA).

“I don’t know a word that can describe it but it definitely is something that has improved everybody that has come in,” said Hughes. 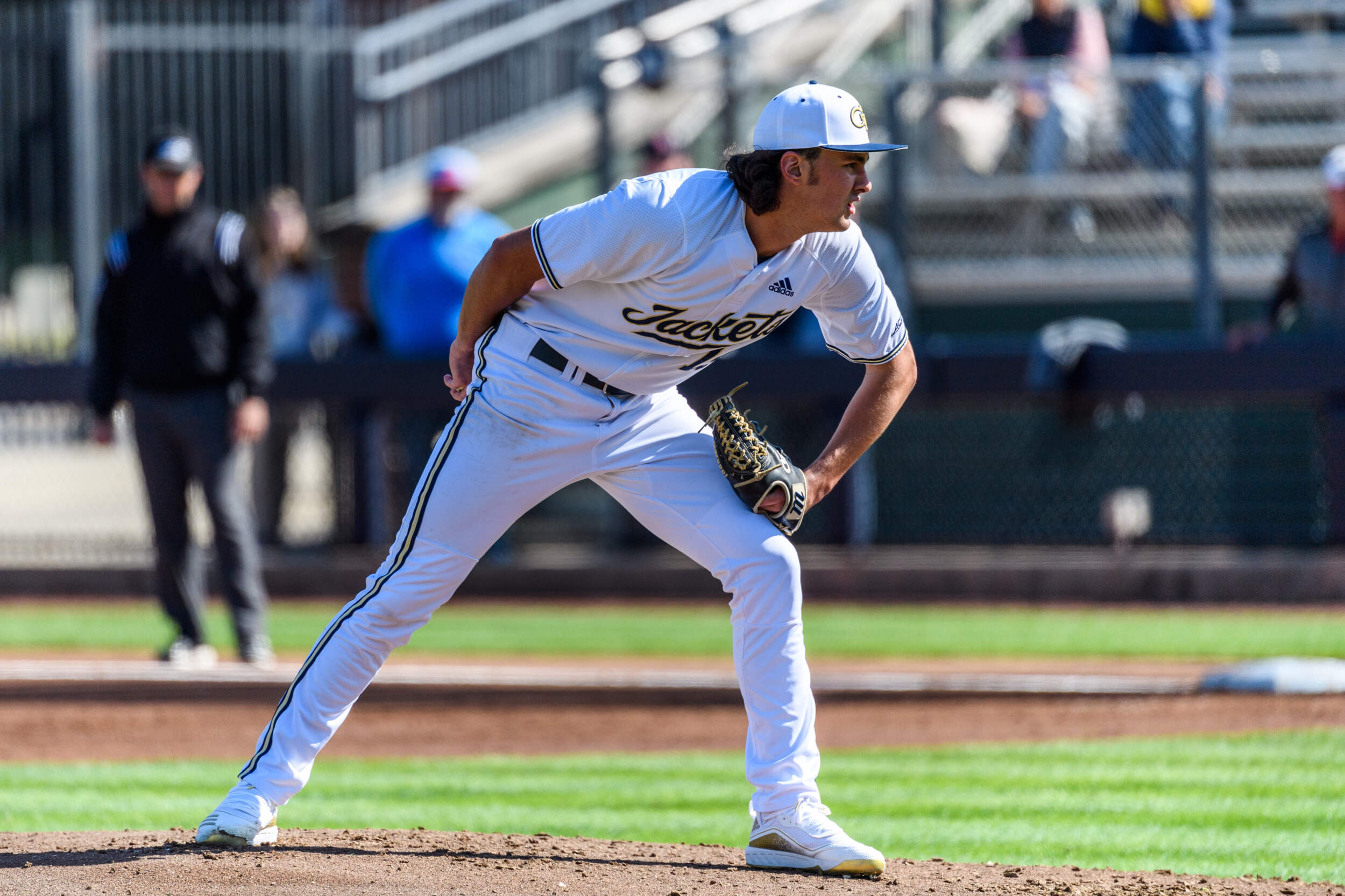 “‘D-Bo’ has really switched up our pitching staff,” said Roedig. “Last year, we would only rely on a few guys because most of the guys weren’t developed enough. But I think ‘D-Bo’ has given everyone that confidence and definitely helped lots of our players improve, especially our freshmen.”

Ironically, Maxwell turned down the Yankees, who drafted him, while Borrell left the Yankees to join the Jackets. The lefty says that it’s afforded him the chance to work with Borrell.

“He’s a great coach but a better guy to be around,” said Maxwell. “He lets you do your own thing but he’ll keep you going the right way. I feel like that’s helped out a lot of guys, especially me. You can’t really cookie-cutter a lot of guys but if you tweak here and tweak there, it will work out.”

They’re enjoying watching each other make things work out.

“I’m pumped seeing Cort out there then Max shutting down the first inning with three strikeouts,” said Hughes. “It just fires me up. We all enjoy watching each other pitch the next day.”

“It’s all about just doing our jobs,” said Roedig. “Out of me, ‘JonBoy’ and ‘Max,’ we’re all great competitors out there. We all have each other’s backs and we all want to make sure that we’re all competing at our maximum level. We don’t make it a competition. It’s more like a team effort.”

Hughes and Roedig have double-teamed Maxwell with information, something the freshman appreciates.

While none of the starters admitted there’s competition amongst themselves, Borrell did. 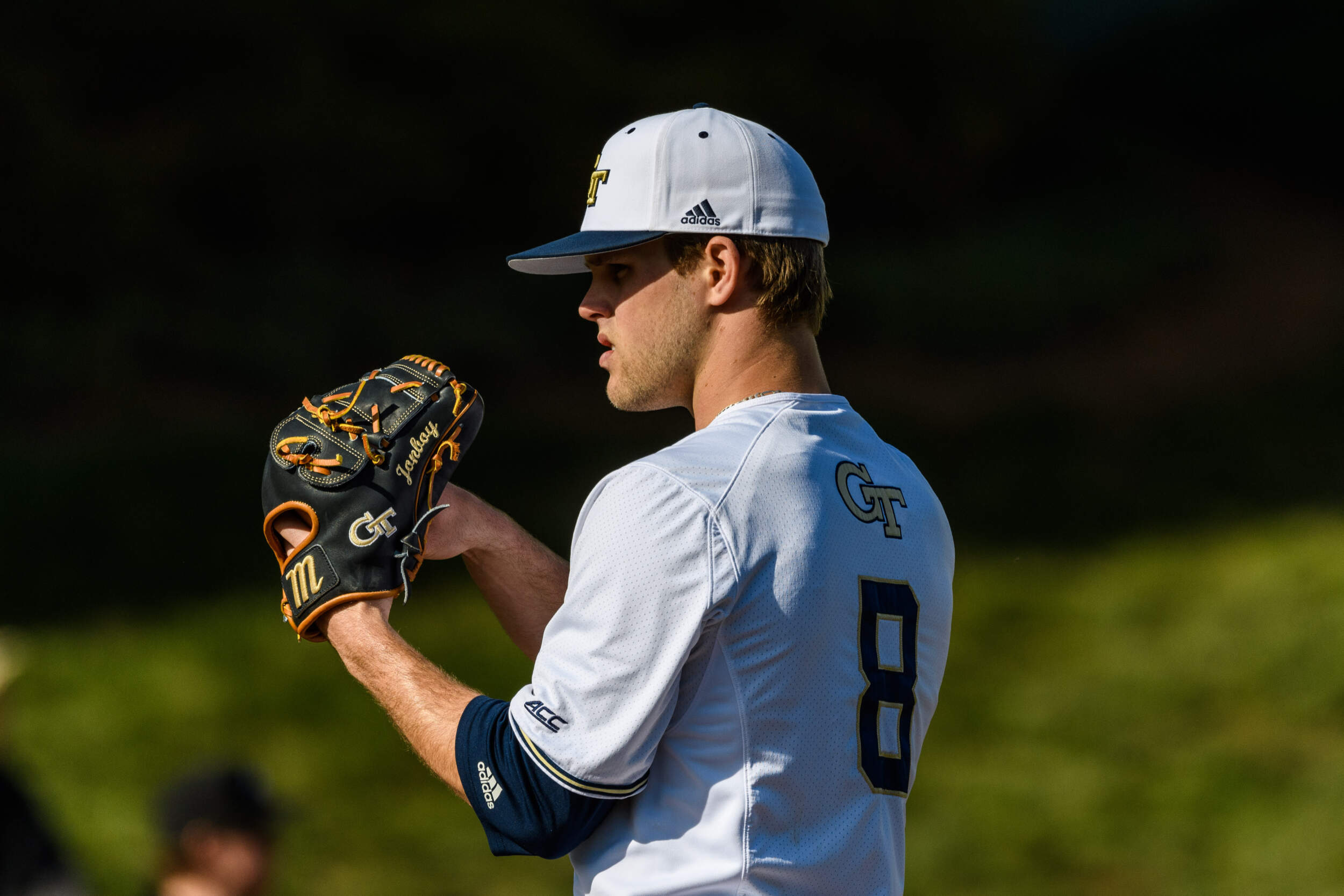 Ideally that will make them the best team in Georgia and, this weekend, against Georgia.

“I think this is the most important start I’ve ever had,” said Hughes.

“I’m definitely excited to see them again,” said Roedig. “But (I’ll treat it like) it’s like any other game for me. I’m going to keep that focus, that same mentality. Just do what I’ve been doing.”

Maxwell hopes to complete a second consecutive sweep, but will be ready regardless of the situation.

“There’s nothing like waking up and knowing that it’s on your shoulders, and the team feeds off your energy,” he said. “So it’s a fun day.”