He learned just how much he disliked them last week, in the practices leading up to Georgia Tech’s game at ACC Coastal Division-leader Virginia.

“I watched film Sunday after the loss [to Pittsburgh] and learned from the mental mistakes I had and made sure I didn’t do it in practice,” Graham recalled in the postgame in Charlottesville. “Every time I made a mistake — I may have missed a hitch or something — I’m getting down and doing 10 push-ups. If I even miss a wrong read, I’m doing 10 push-ups. I’m just trying to get better every day and it showed today.”

Graham admitted he did close to 200 push-ups during the week. More important, he learned that the commitment and expectations of perfection from himself every day in practice can show up every Saturday in games.

The best part may have been that that revelation didn’t require anyone in his ear. He recognized that he just needed to keep his ears and eyes open and his mind clear and focused.

“I had a lot on my mind last week and I just wasn’t focused,” said the redshirt freshman. “This week, I made sure I didn’t have any outside distractions and just played ball.

“We had a great week of practice and the O-line blocked its butt off,” he said. “I felt comfortable. I knew the game plan real well. I knew those guys on defense were pretty good but I knew that we’re pretty good when we execute. We came out and executed. The first drive we got the four-play touchdown. It just felt amazing.” 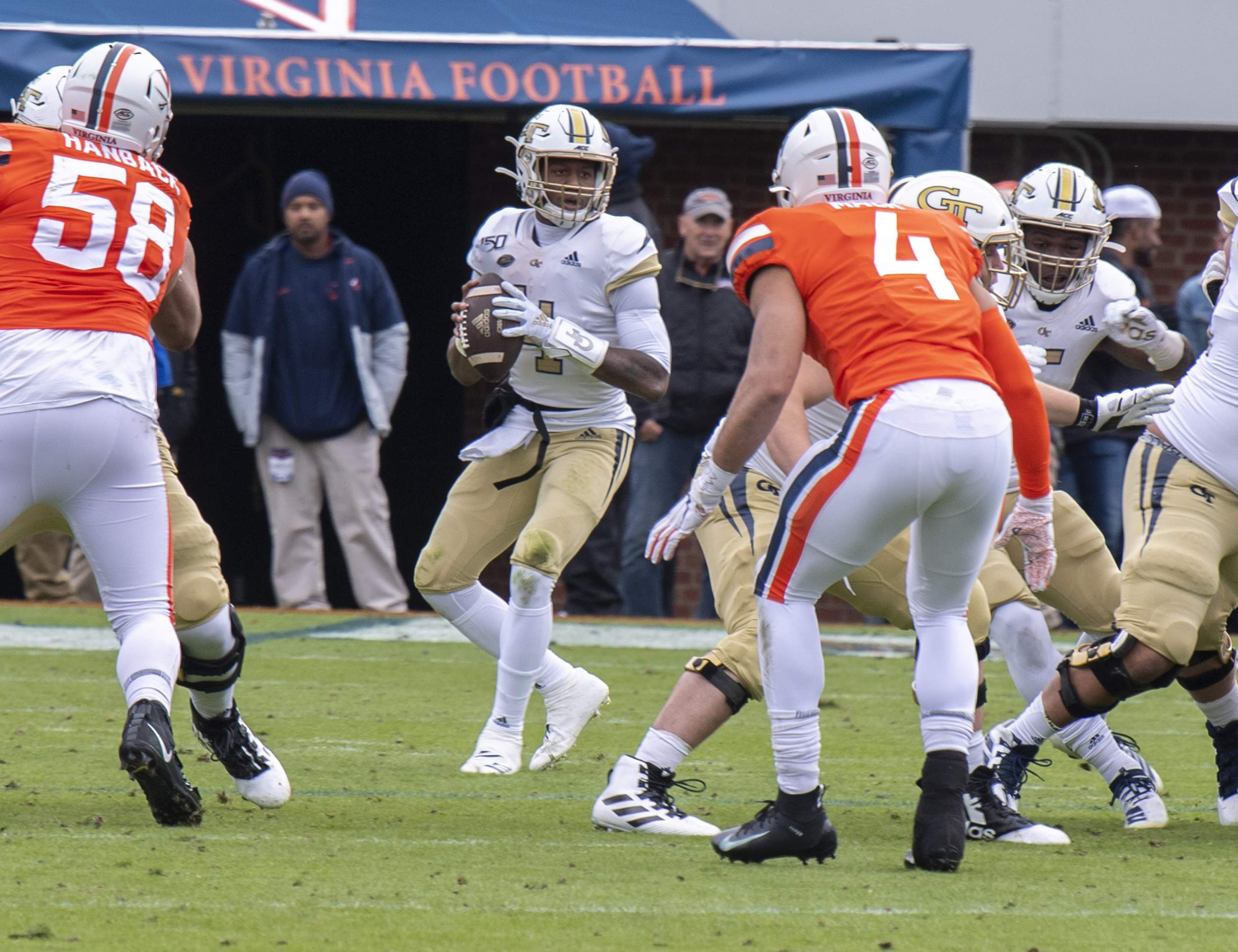 Head coach Geoff Collins wasn’t amazed by his QB’s turnaround and progression over a week, but was proud of it and him.

“James Graham, when we were getting ready to play Pittsburgh a couple weeks ago, self-admittedly, did not prepare in a way to give him an opportunity to play at a high level,” Collins said. “He struggled a little bit, learned from it, came back last week in the week getting ready to play Virginia, against one of the top defenses in the country, and prepared like you’re supposed to prepare. Then he went out there and had success. That’s another statement for everybody in our organization. If you do that and you follow our process, you’re going to have the ability to play well.”

Graham didn’t wait to begin his bounce-back. He immediately after the Pittsburgh contest.

Graham came out of the gate firing confidently. He was unfazed by the fact that the Cavaliers’ defense allowed opposing quarterbacks a 55.8 completion rate. He lit them up, completing 68.1 percent, a season-high by any opposing quarterback (Notre Dame’s Ian Book completed 68 percent). It took him four plays to get the Yellow Jackets into the end zone. The score was only the third touchdown by a UVA opponent on a opening possession all season, the first in a month (Miami was the last to open the game with a scoring drive on Oct. 11) and the first all season at Scott Stadium.

The drive was capped in spectacular fashion, with Graham hitting burner Ahmarean Brown with a 59-yard rainbow.

Getting Graham off to a fast start was very much by design.

“As opposed to the week before, he got his feet underneath him, he hit a couple of early throws, he got some confidence, we made a couple of plays,” said offensive coordinator/quarterbacks coach Dave Patenaude. “Certainly, throwing the ball over their head for a [59]-yard touchdown helps your confidence. We tried to actually game-plan it that way, to get him off to an early start.”

That early start began on the game’s third play, when Graham hit tight end Tyler Davis for nine yards on third-and-three. Looking to the grad. transfer has been part and parcel of Patenaude’s message.

“I just went to James and said, ‘That guy’s a really big target. He’s easy to find, he’s got great hands and if you need to find somebody, that’s a good checkdown guy for you. Get him the ball and he’s going to make a play for you,’” said Patenaude.

The next play, Graham went to Brown, a guy who’s showing he can hit the big play. The result was connecting on a long scoring strike for the third-straight game.

Having established confidence, Graham hit his first five throws and 10 of his first 12, four of them for big gains (plays of at least 20 yards), all to different receivers — the TD to Brown, a 37-yard pass to Tobias Oliver, a 38-yarder to Davis and a 25-yard TD strike to Malachi Carter. He’d go on to throw for a season-high 229 yards, the most by a Jackets QB since Justin Thomas threw for 264 against Duke on Oct. 29, 2016, and the most in a road game since Thomas went for 251 on Oct. 31, 2015 at UVA. His two TD passes gave him eight on the year, which are the most by a freshman at Georgia Tech since Reggie Ball had 10 in 2003. 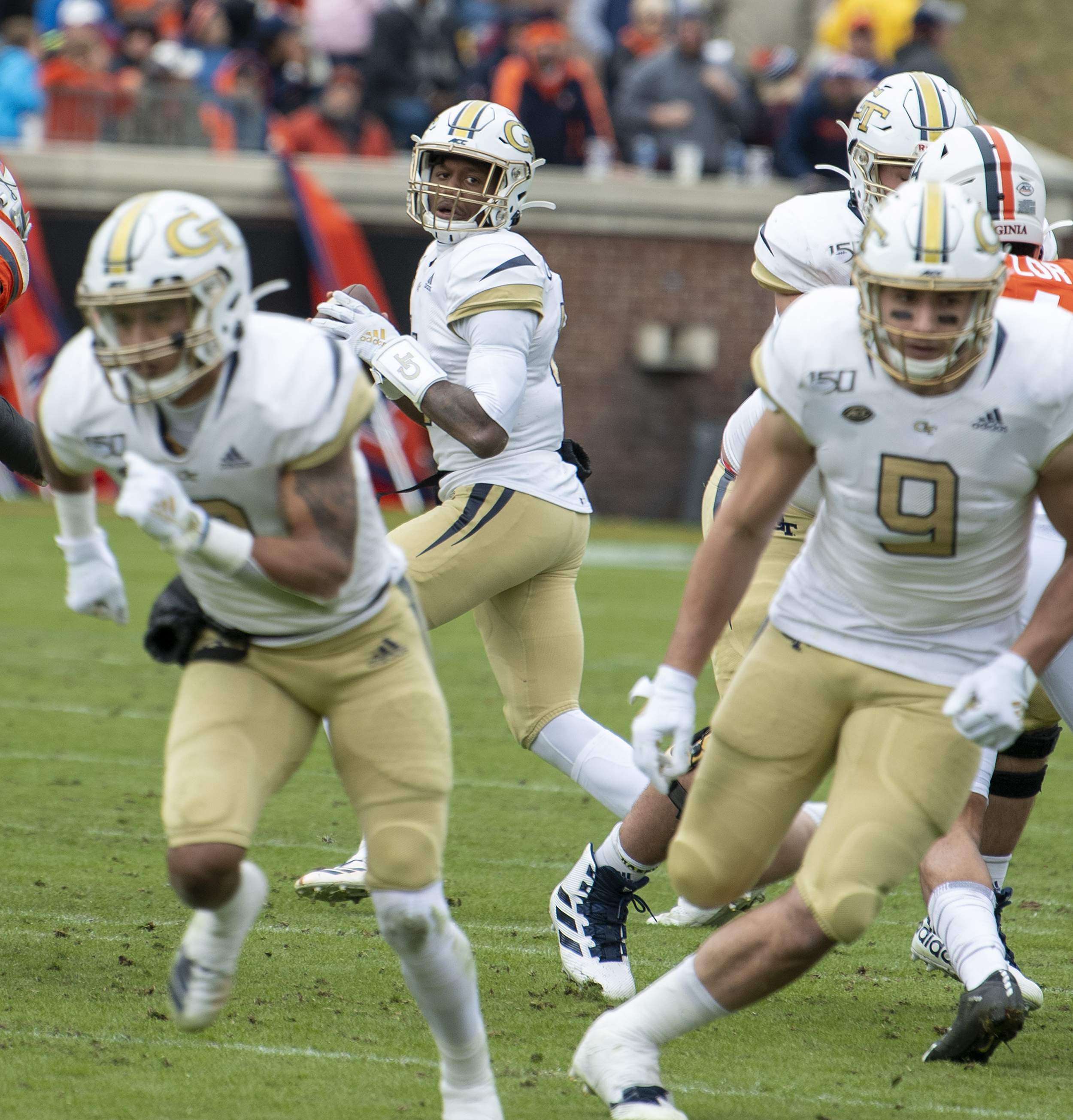 “I thought he threw the ball well across the board,” said Patenaude. “He made good on-target throws, he knew where he wanted to go with the ball. He played with a much better sense of himself. He does throw that deep ball really well. He threw a lot of balls to the edge of the defense. We protected really well, so he got a good look at a lot of throws. I think he missed two targets the whole game.”

The performance was light years from the previous week against Pitt, when he went 3-for-13, for 57 yards (51 coming on another long touchdown pass to Brown), didn’t complete back-to-back passes and saw the offense go three and out five times. He’d be relieved by Lucas Johnson to start the second half before coming back in to finish the game in the fourth quarter.

Johnson actually played a big role in Graham’s turnaround, assisting in the pregame prep for Virginia, then the in-game adjustments.

Graham put in another solid week of preparation in getting ready to make what will likely be his sixth-straight start this Saturday against Virginia Tech at Bobby Dodd Stadium. Once again, he’ll be going up against a top-flight defense, this one directed by legendary VT defensive coordinator Bud Foster.

Tech will have its hands full with the Hokies, especially junior linebacker Rayshard Ashby, who ranks in the top five in the ACC in tackles and tackles for loss (13, tied for fourth) and is four-time ACC Linebacker of the Week. He’s the centerpiece of Foster’s defense.

Patenaude has great respect for Foster, Ashby and Co.

“You’re going to see 11 guys within 10 yards of the ball. They are going to crowd the ball and it allows the linebackers to be run-through guys and be uber-aggressive because the safeties are right behind them,” he said. “Their scheme allows [Ashby] to be really aggressive, run through. He runs through people, he jumps over people. We’re going to have to find him in the run game, put a body on him and it’s going to be different schematically against these guys than it’s been the past few weeks.”

By Saturday, Graham will have seen plenty of Foster’s unit on film, continuing what has become his game-week tradition. He believes in the process and the growth of the offense that is starting to manifest itself on the field, and will soon do so on the scoreboard.

“You look back maybe six weeks ago, we were just stuck in a hole,” he said. “We worked our way out of it, practicing, executing what the coaches called and preparing, repping it, repping it, watching film, and going in, locking in and doing what coaches are calling.”

“If we block and throw and catch and run pretty well, we’re going to be pretty good against everybody that we’re playing,” he said. “At this time of year there’s not a lot of secrets. It’s about execution. You’re just trying to figure out what are the things that fit who they are and you embrace the challenge and you go get ‘em.”

Collins likes the way Graham is going after it, embracing every challenge and becoming a tone-setter.

“You see the pure and simple example of James Graham, self-admittedly not preparing to play the game at as high a level as he wanted to, then turning around a week later and diving into the process and investing in the process, and then having success as a result of it,” he said. “More and more guys are doing it and doing it at a high level. At first, it’s hard to learn but the more and more it happens, there’s more evidence and more data that supports if you do this, this, this and this, you’re going to get to college football Saturday and play at a high level. Collectively, that’s happening more and more.”

Graham is hungry for more and can’t wait to see how that manifests itself — and how few push-ups he’ll need to do in the future.

“We got better than last week, we played a lot better,” he said. “We’re just going to keep growing as a unit.”