THE FLATS — Georgia Tech had light practices to start the final week of preparation for their Dec. 26 appearance in the Quick Lane Bowl against the University of Minnesota at Ford Field in Detroit.

They were light both physically and emotionally and just what the doctor — head coach Paul Johnson, actually — ordered. 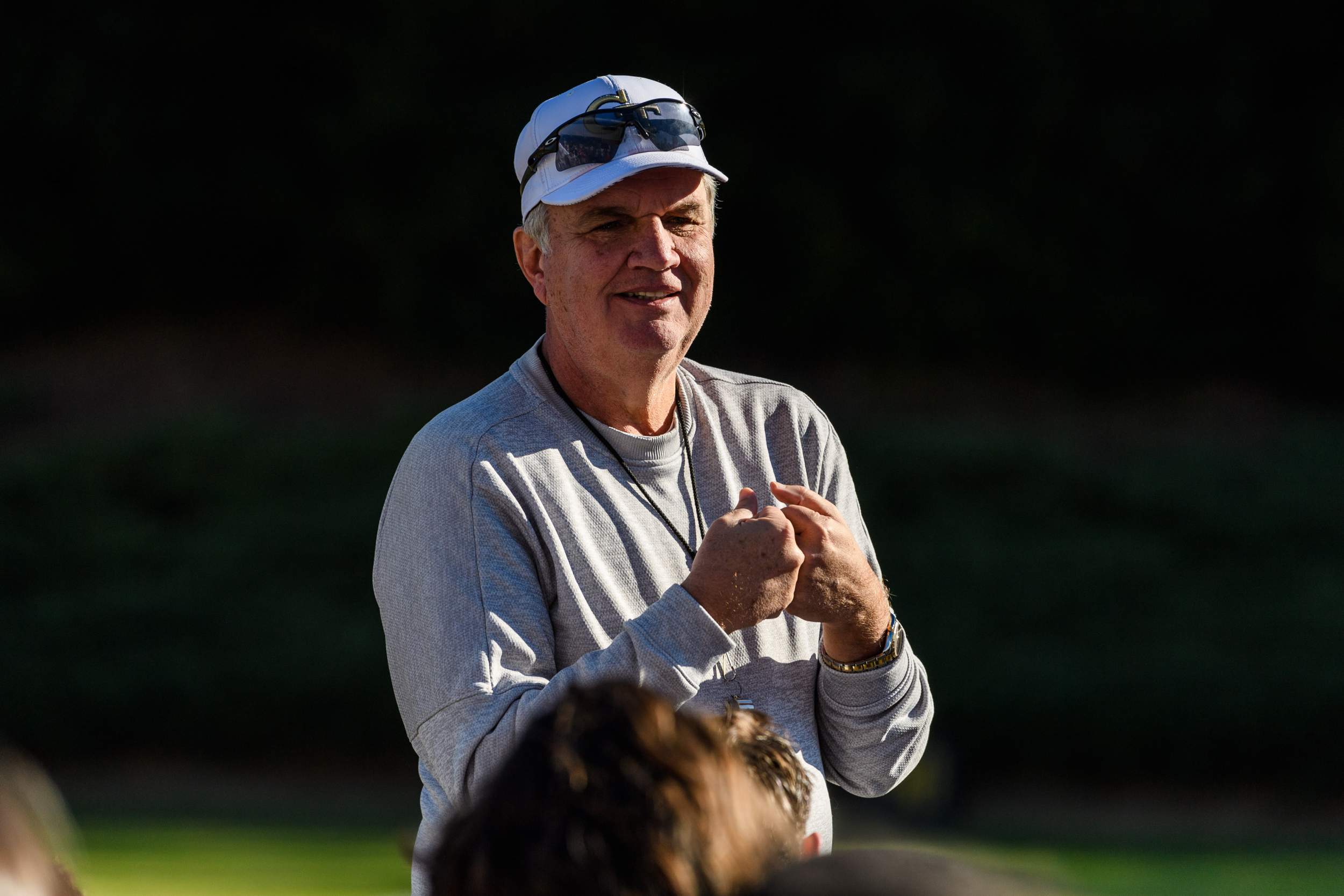 “More than likely, we’ll go pads on the morning of the 22nd, when we get back but we haven’t been doing a lot of hitting anyway,” said Johnson, following Monday’s practice. “I kind of like to do some 1-on-1 live but I don’t want to get somebody hurt. We’ve played enough games. You worry about the pad level when you first start but these guys have played.”

The players not only got a break from the pounding but also got an opportunity to break away and go home for some pre-holiday and post-finals R&R on Wednesday, Thursday and Friday. They’ll return to campus Saturday for practice, then the airport for the flight to Detroit for the game.

While Johnson may appear to have taken his foot off the gas, the practices still accomplished the necessary prep for the Golden Gophers and actually were a gas.

“We’re having fun with it,” said quarterback TaQuon Marshall, who will be playing his final game on the 26th. “The guys were getting after it. I think everybody’s ready to play. They’re kind of tired of practicing against each other, kind of like the camp feel you have. We’re excited for this weekend, to get down to Detroit, just have a good time with the guys and hopefully come out with the ‘W’ at the end.” 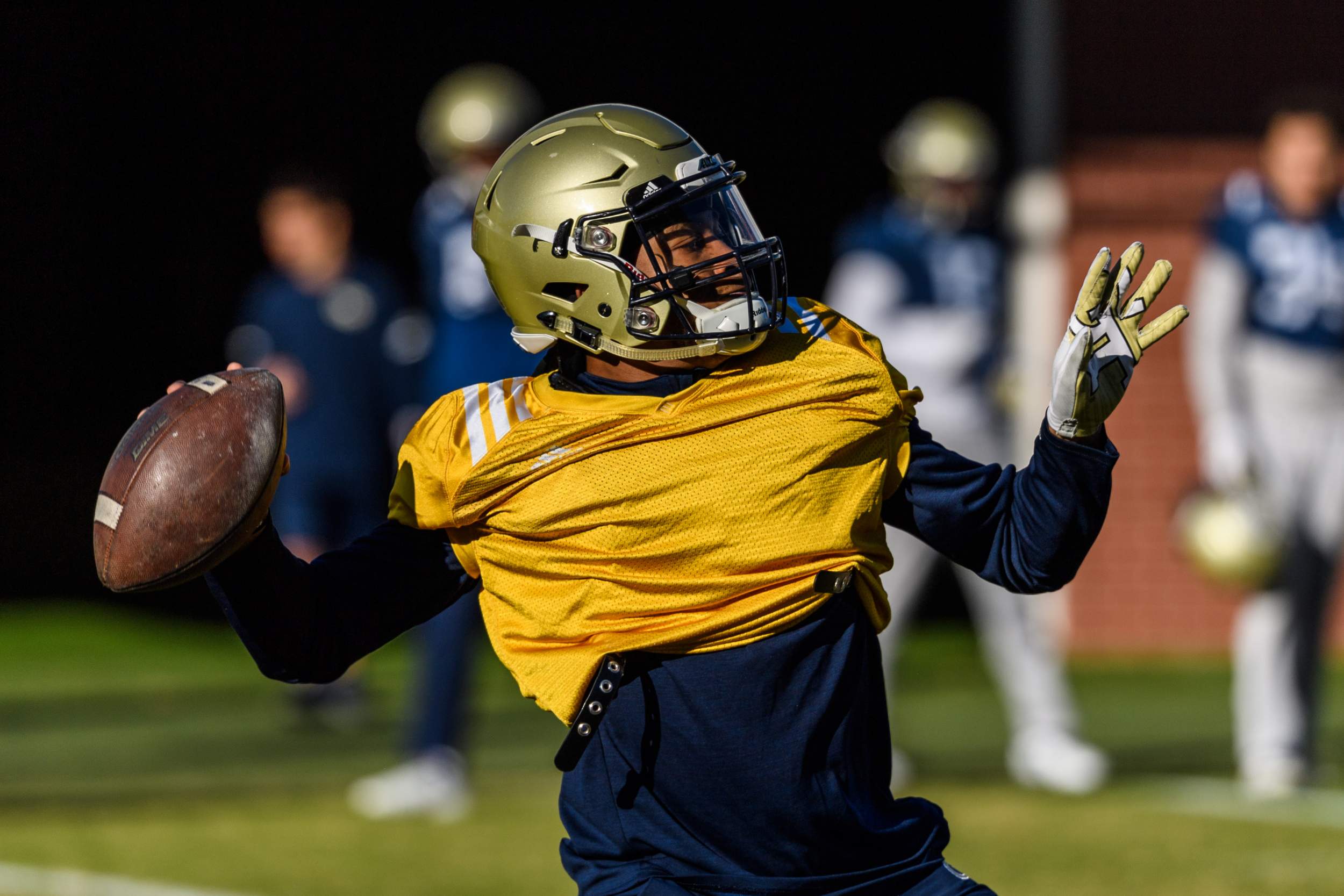 “The pressure’s still on but we try to have fun. We know the days are trickling down, so just go out there every day like it’s our last,” said redshirt senior A-Back Qua Searcy. “When we made a big play we’d joke around, laugh, just try to have clean, fun at practice, joking around with the coaches.”

“We’re all loose and kind of messing around,” said junior center Kenny Cooper. “During practice time we’re serious but it’s been relaxed all week. Really so far, it’s been all excitement. We’re not thinking, ‘It’s the end,’ right now. We’re just thinking about Minnesota and going out there and getting Coach Johnson a win in his last game.”

That emotional element of the game has taken the form of celebration and gratitude for this final time to practice with and simply be around each other.

“It’s been fun,” said redshirt senior DE Desmond Branch, who transferred from New Mexico, then Trinity Valley Community College in 2016, playing his final three years at Georgia Tech and recently receiving his degree. “I think we’re all realizing this is the last preparation week for a game that we’re going to have together so we’re all doing our assignments, we’re all doing everything but we’re really enjoying the process of practicing, being together, hanging out, just trying to get this dub on the 26th.”

“It’s been fun, but bittersweet knowing that it truly is the last one,” said graduate free safety Malik Rivera, who last year at this time was at Wofford, in the midst of the FCS playoffs, while trying to decide whether to stay in Spartanburg, S.C., or come to Atlanta. “Now I kind of know — just try to make it fun still, run around, jump around, talk to everybody, high fives, still yelling, still trying to communicate, still trying to just have fun with the last few days. Everyone’s been really on point. Really just excited more than anything just to be playing.”

A lot of the team is preparing for its first bowl game. For them, it’s rewarding to get to keep practicing and play one final game.

“It’s been good getting out there, getting back,” said junior wide receiver Jalen Camp. “The first couple of days was kind of getting the jitters out, coming from break but we’re starting to gel well, get back our rhythm.” 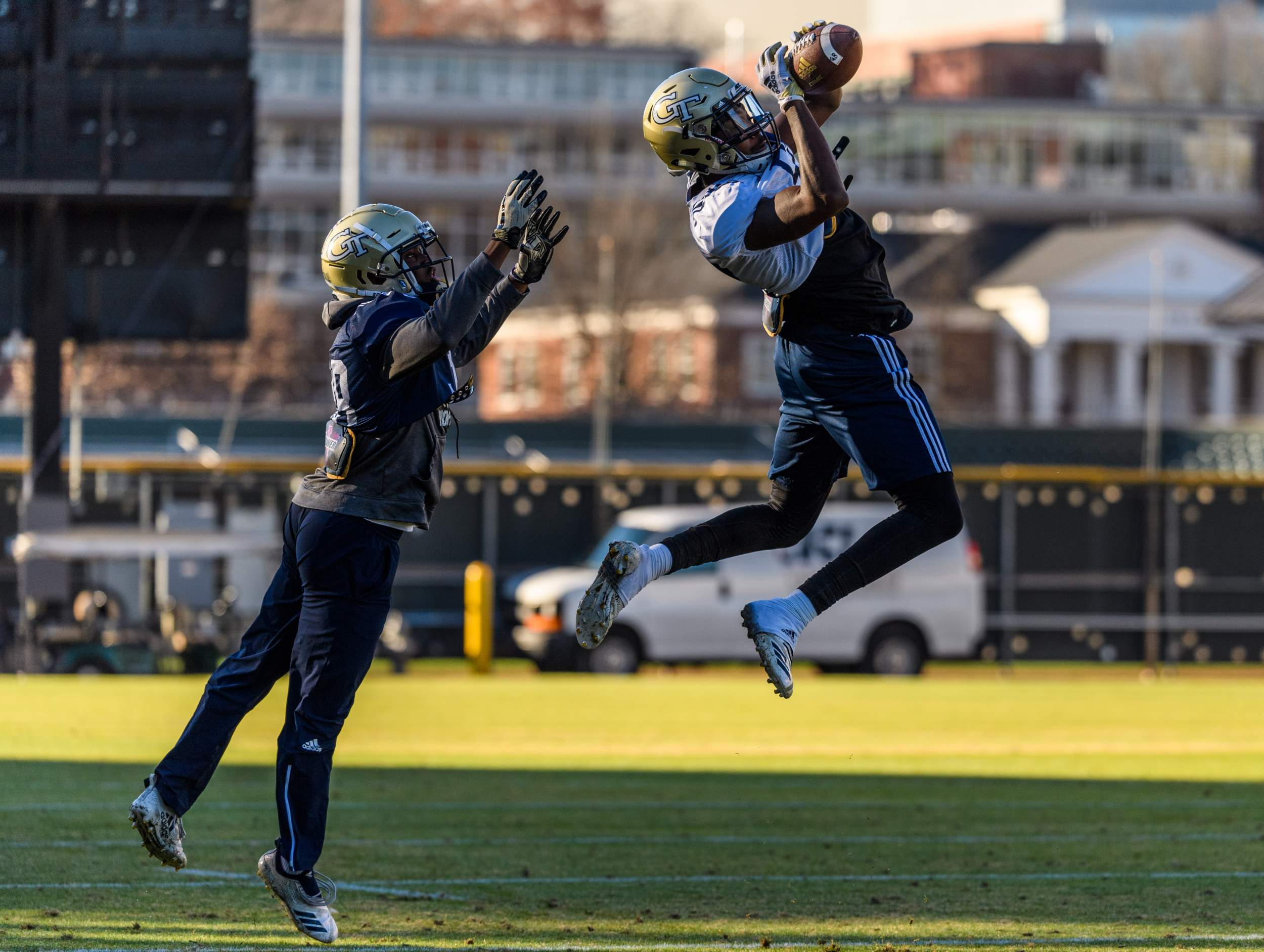 Having finals over and done with has made things especially fun and easier to focus on the prize that lies ahead.

“It’s been pretty different,” said freshman JACK linebacker Charlie Thomas. “The practices have been spread out just because of finals. Practice is more intense. Now you can focus on practice and sleep. You don’t have to focus on school.”

“It’s my first bowl game, so I’m excited,” said redshirt freshman corner Tre Swilling. “Given the chance to go to Detroit, play the day after Christmas, be with my team and the coaches and be able to send Coach Johnson out on a good note is the main priority for me.”

Nothing would make the Jackets happier than allowing Johnson the opportunity to light one final victory cigar — especially Swilling, who will always associate that aroma with Johnson and Thursday afternoons.

“Just whenever we go out there on Thursday, he goes out there, crosses his right leg over his left and smokes a cigar. I don’t think I’ll forget that,” said Swilling of the pre-practice memory. “I think that’s one of the neat things that you pick up on. It’s one of those things that kind of sneaks up on you week by week. If we didn’t realize what day it is, it’s Thursday. I asked him one day, ‘So when will WE be able to smoke one together?’ I was kind of messing with him. He brushed it off. But that’s one of the things I’ll take away and remember.

The Jackets are determined to send Johnson out a winner and, for some, go out winners, but they’re not putting any extra weight on their shoulders. Instead, they play to play as they’ve practiced, relaxed.

“There’s no pressure on you. You just go out and have fun,” said Marshall. “You get to relax and heal up and then we had an extra week off the week after that, so when you get back to practicing it’s fun, it’s more relaxed and everybody’s just out there trying to have a good time and just enjoy it. 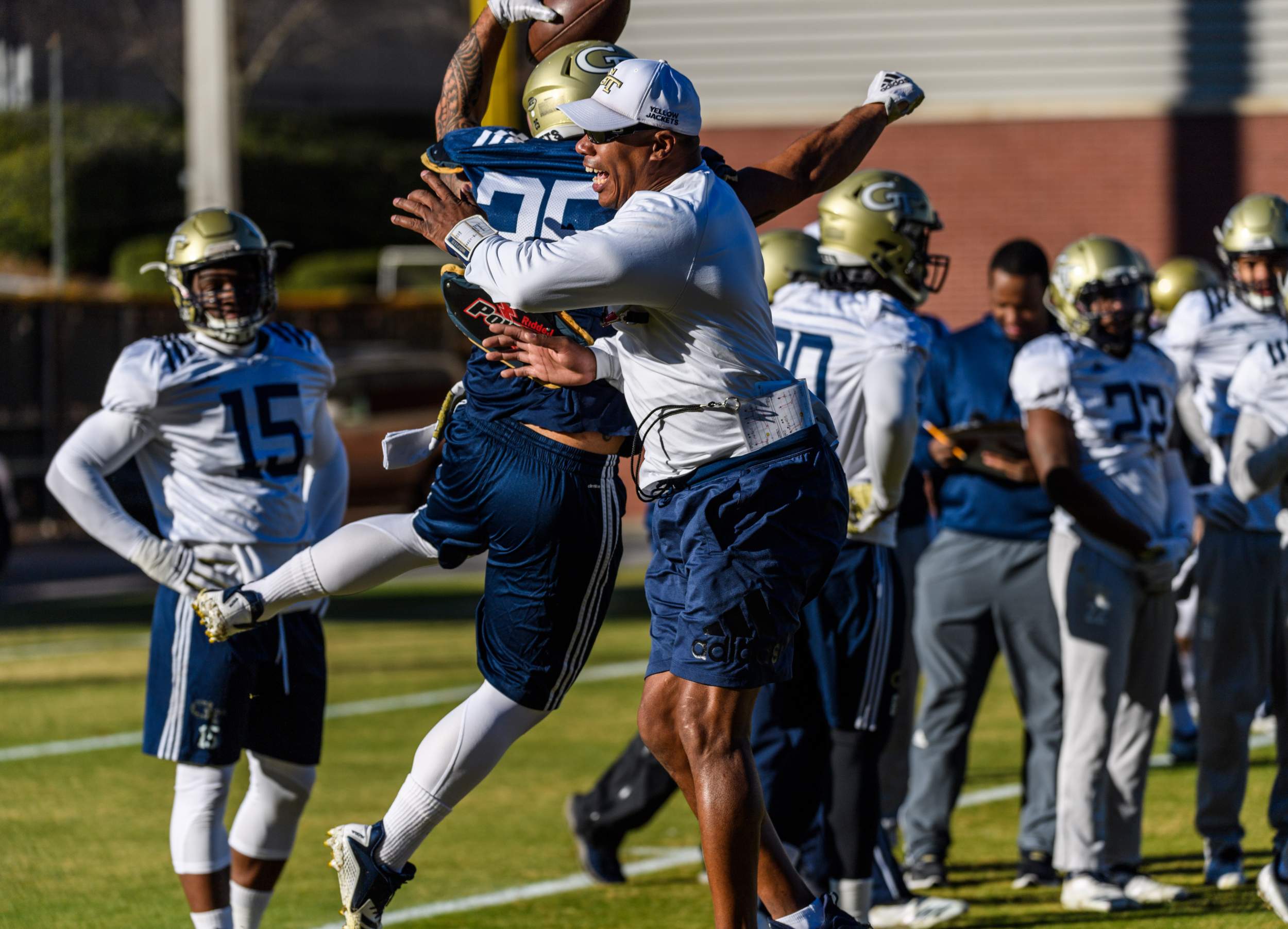 “It will definitely sink in when we get to Detroit, especially the night before the game and then, especially on game day, just knowing that it’s the last one,” Marshall added. “You definitely always want to go out with a bang so that will be running in the back of my head when it’s time to go.”