Jan Hilliard always had an interest in building things. She grew up aspiring to be an architect, which eventually led to her choosing to attend college at Georgia Tech.

She had no idea that she’d have a hand in building something else, a legacy involving another of her loves, basketball.

Hilliard, then Jan Chandler, would make history as the first African-American woman ever to play basketball at Georgia Tech and the first African American woman to letter in it. She didn’t realize what her impact would be — beyond the day-to-day of helping the Yellow Jackets — and all these years later, still doesn’t consider herself special.

Hilliard, who was introduced to the game at age 13, courtesy of a PE class at Southwest High School, Atlanta. It was at Southwest and on the basketball court that she learned a tough lesson about being tough, being cut on her first try to make the team by Coach Anna Wade, who she still considers one of her mentors.

“I was very timid and I was very nice. A little too nice to make my high school team with my two best friends (Belita Bailey Franks and Althea Alexander) the first year we tried out in the ninth grade,” she said. “My two best friends made the squad. I made it in my sophomore year, after I toughened up a bit. My strongest suit was defense.”

In the classroom she needed no toughening up, only an opportunity. That opening came her junior year. The choice boiled down to Howard University, a prestigious HBCU, located in Washington, D.C., where she would have received a partial scholarship for its School of Architecture, or Georgia Tech.

“During the time I was scheduled to graduate from high school, my math teacher had a group called the Committee to Increase Minority Professionals in Engineering, Architecture and Technology (CIMPEAT) come and speak to our class,” she recalled. “One of the people who spoke was a black architect. When I told the group that I was interested in becoming an architect, he told me that the field of architecture was flooded and that I could major in civil engineering and still do design. Therefore, I stopped thinking about architecture and decided to pursue civil engineering at Georgia Tech, and I would be close to home.” 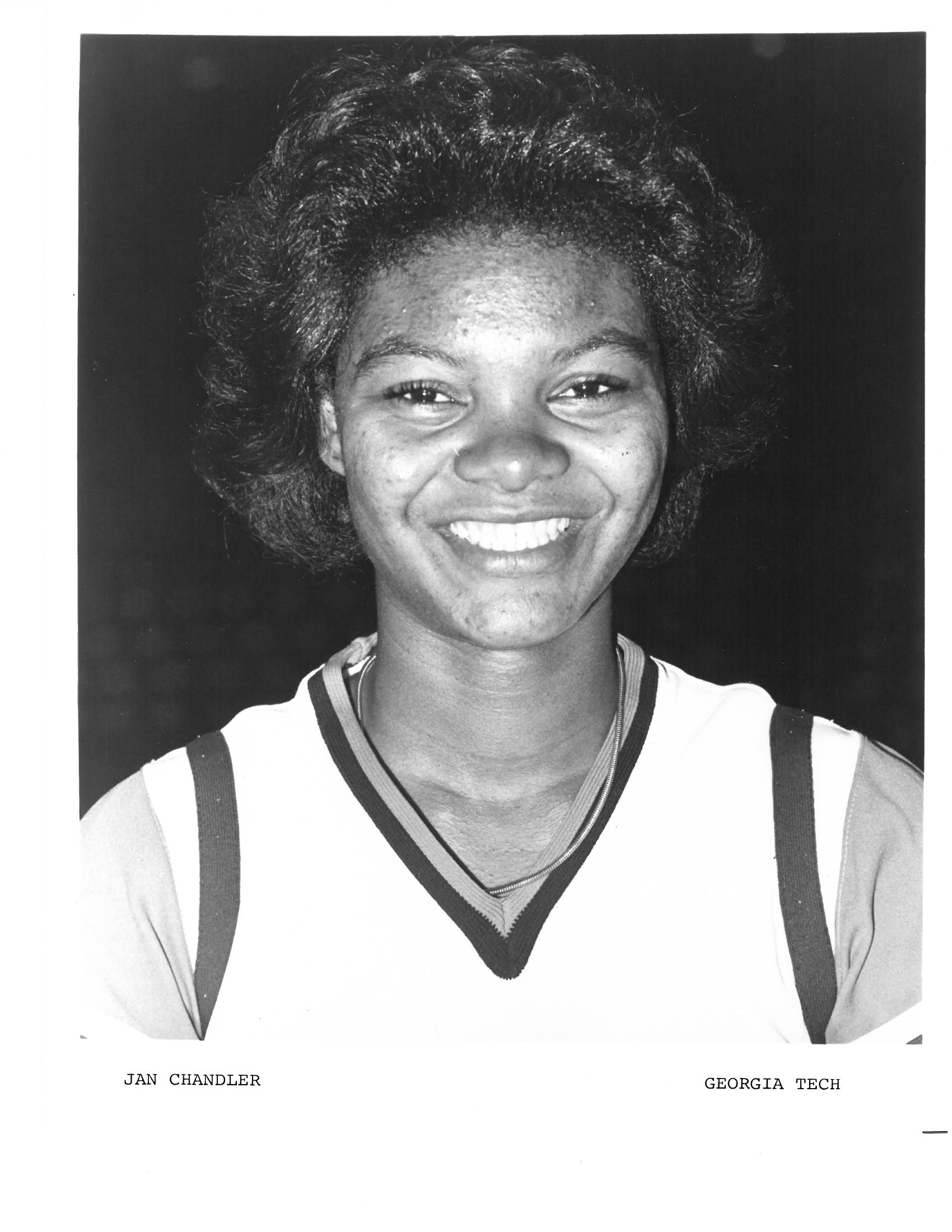 Hilliard arrived in 1975, right on time to be a part of the foundation for the Georgia Tech program, which graduated from a club level sport to the D-III Georgia Association of Intercollegiate Athletics for Women (GAIAW) in 1974, getting a boost from Title IX, which had been enacted three years prior.

There was no Internet to attract women on campus to try out for the team — there may not have been too many to attract anyway, as Georgia Tech was considered a small school because there were fewer than 3,000 women enrolled — but Hilliard wouldn’t have needed one. She spent plenty of time in the gym and, as she said, was in the right place at the right time.

“Back then there were not a lot of women who tried out, or probably who knew there was a women’s basketball team at Tech,” she said. “I just used to shoot around at the Freshman Gym and that’s how I discovered there was a team.”

Her discovery led to her trying out for and making the team.

In 1975, eight years after Harvey Webb broke the color barrier for Georgia Tech men’s basketball, Hilliard would do so for the women.

While it can be lonely being the first of anything, Hilliard never felt alone. She knew Coach Jim Culpepper had confidence in her, her teammates were friendly and made her feel a part of the team, especially Jane Longo and later, Kristy Sampson and Bonnie Tate. She heard plenty of cheers from friends (Rhonda, Chuck James, JT and Paul Butler) in the stands watching the team, and, of course, had the unwavering support of her late mother Dr. Jean Bell Chandler, Ph.D., who was a tenured professor at Clark Atlanta University — Jan calls her, ‘My biggest supporter and best friend who loved and supported me unconditionally’ — and her dad, the late Johnny Chandler, a coach.’

Culpepper’s team, known as then as the “Yellow Jackettes,” which went 6-16 their first year, took a step back the following season, Hilliard’s first going 2-24, with both wins coming against Atlanta Christian. But the team stayed positive, knowing they were improving.

“I remember Coach Culpepper’s passion!” Hilliard said. “He was so engaged and passionate about ensuring we were good. He was such a great coach who always tried to make each one of us better individually, thereby making the team better. I also remember the passion of the players that were still on the team from the year before me. They were determined to keep a women’s team alive at Tech.

“We were still a new team and we played against schools that had women’s teams for years,” she added. “But we played with passion and determination because we all loved playing the game.” 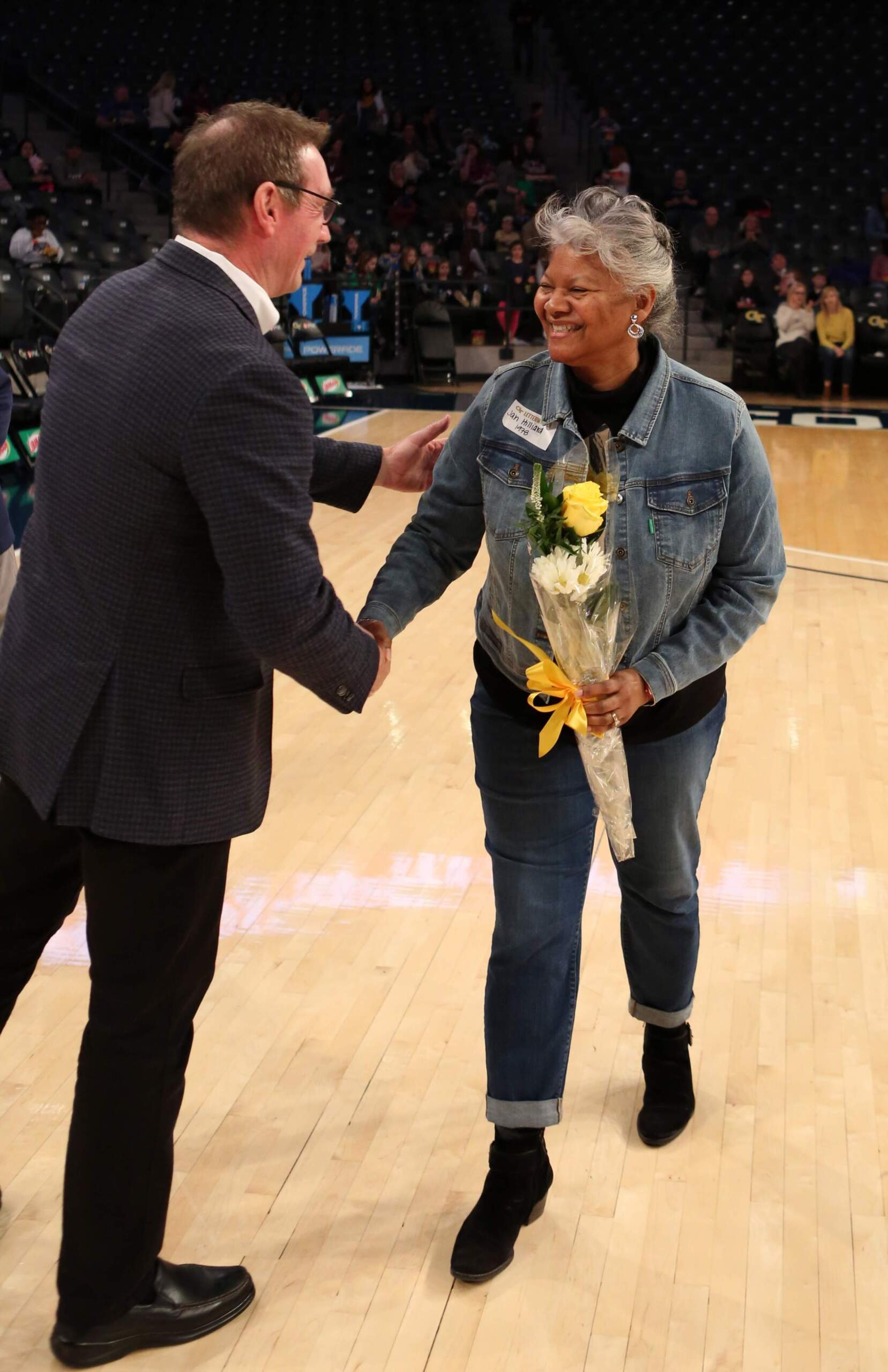 The 1976-77 season, saw the team have a breakthrough. Led by Tate, a future Georgia Tech Hall of Famer (Class of ‘91), who led the team in points, scoring average, rebounds, and rebounding average, the Yellow Jackets won eight of their first nine games on the way to a 19-8 season. The 8-1 start was highlighted by a 55-53 win over Tennessee Temple on Jan. 14. The Jackets’ eighth straight win after an opening-night loss, was powered by Hilliard, who put up an 18-point, 14-rebound double-double, and scored 10 of the Jackets’ final 12 points in the game they played without key players Tate, Harriet Jones and Janice Morelock and trailed 51-41 with five minutes remaining.

The Jackets concluded the season by recording the program’s first two postseason wins, topping Morris Brown, 75-27, then Spelman, 55-43, in the GAIAW Tournament. Hilliard finished second, behind Tate in rebounding and third in scoring (behind Tate and Sampson), just missing averaging a double-double for the season (9.3 ppg, 11.4 rpg). She even led the team in one of the few categories Tate didn’t, field goal percentage, shooting a team-best .479.

But Hilliard’s calling card was defense and rebounding. She ferociously attacked the boards, completing her career with 7.2 rebounds per game, which still ranks 10th in program history.

She’d finish up her degree at Southern Tech but her place in Georgia Tech history was secured. She would put her Civil Engineering degree to good use, working for 30 years for the Georgia Department of Transportation, beginning as a roadway design engineer and retiring in 2015 as Design Group Manager.

In 1979, Georgia Tech officially joined the ACC. The rest is history.

Jan still follows women’s college basketball and is amazed at how the game and those playing it have grown since she played.

“It really has changed because there weren’t very many tall women. I don’t know what they’ve been eating,” she said in a 2018 interview with Ramblinwreck.com. “I was one of the tall ones.

“(Also) The intensity, they play just more intense,” she added. “I guess I had to toughen up but it seems like they come here tough enough to play, to compete, which is great. They have a lot more confidence in themselves and their game than I probably did.”

“I have not met him, but it would be great to hear his experience,” she said.