Dasia Smith is on the verge of the real world, which figures to be an interesting place for the recent Georgia Tech graduate given her rather unusual field of choice.

She’s now a minted environmental engineer, although she has some certification exams to take.

Smith long jumped, triple jumped and ran a few 200-meter races for the Yellow Jackets from 2016-’19, and now she’s getting ready to jump into the world of water management. With three job offers on the table in the wake of her recent graduation, she’s given herself a deadline of choosing one by the end of the week, a couple days after Christmas. She was pleasantly surprised Friday morning to receive an offer from Arcadis, a company based in Amsterdam, Netherlands, with office space in Atlanta.

She’s weighing that against Atlanta’s Brindley Pieters and Associates and Carollo Engineers, with whom her office would be in Ft. Worth, Texas.

“I want to do more process. I’m leaning toward Carollo Engineering,” Smith said before learning of the offer from Arcadis, with whom she interviewed online. “I would probably be a process engineer working in drinking water treatment.”

Coming from Hiram, Ga., just west of Atlanta, she hailed Tech coach Nat Page – who next summer will coach high jumpers, long jumpers and triple jumpers for the U.S. Olympic team – with an idea. Or maybe a plea.

“She actually called me a few times and said, ‘I want to compete in track and field.’ What attracted me to her was I said, ‘What do you have that you think would make you competitive in college track and field?’” Page recalled. “She said, ‘I have a 32-inch vertical.’ I said, ‘OK, I’m going to give you a nice tryout.’ I started watching. She was gifted with really good muscularity for a young lady. She was not gifted with speed.”

Smith was blessed with significant horizontal jumping ability minus great speed, and she worked herself into highly competitive form.

She set a personal record of 11.61 meters in the triple jump as a senior in 2019 at the Vanderbilt Invitational (indoors) and won the long jump outdoors at the Tiger Track Classic with a leap of 5.75 meters.

Smith eventually landed a partial scholarship, and she did it with grit. 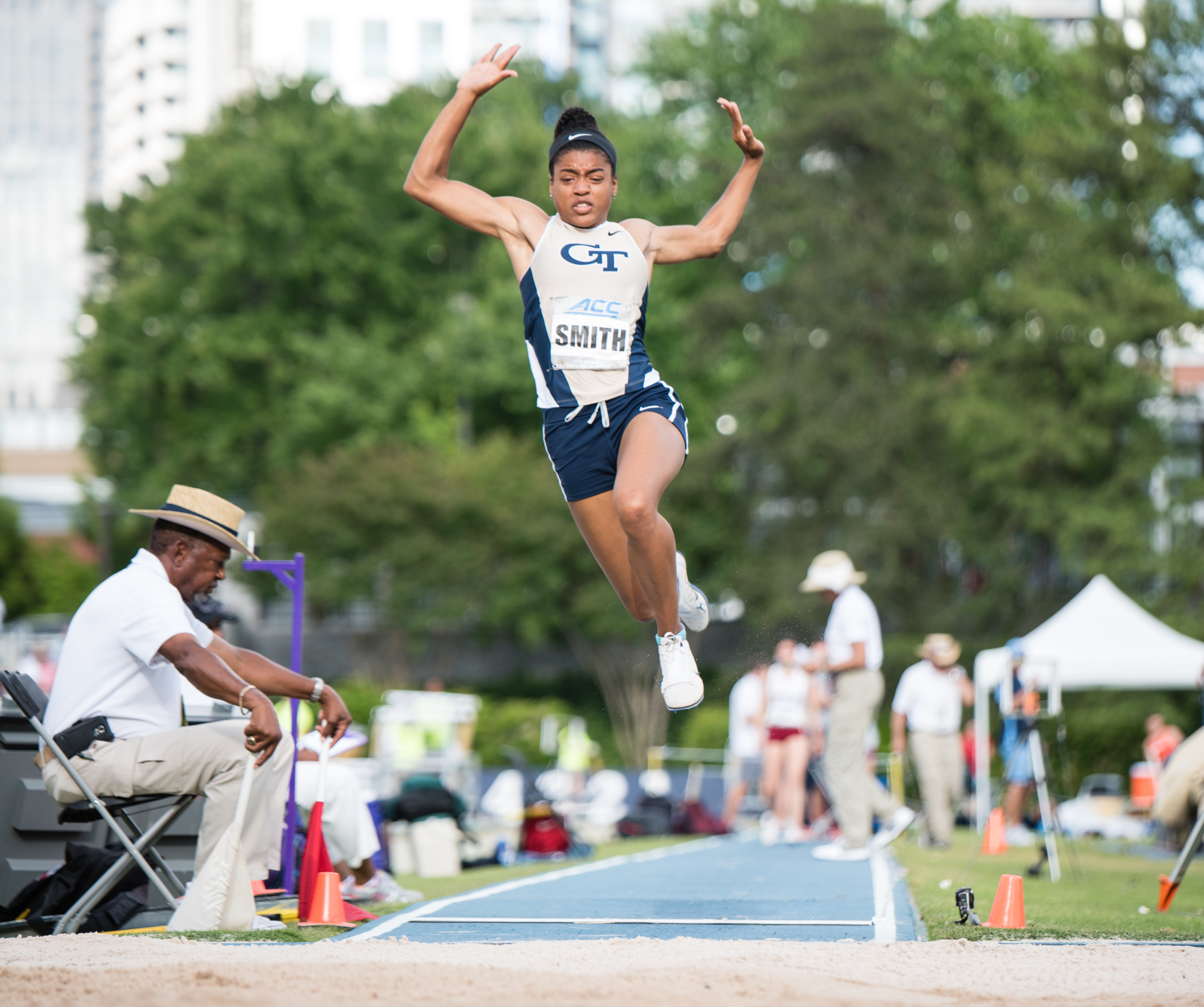 Georgia Tech helped prepare Smith for the “real world” in ways that go beyond anything that happened in track and field.

And by the way, she says, “It was a running vertical, not standing,” that Smith was talking about with regard to that vertical jump.

Smith began as an architecture major, and struggled as a freshman as so many do, before changing to environmental engineering.

The rigors of The Flats set her up.

“Definitely, the competitive side and the time management (helped),” she said. “There’s always conflicting schedules . . . and that pressure molds you for the real world.”

For a few days, Smith has taken it easy recently, and that’s rare. She spent lunch Friday celebrating the birthday of her mother, Terri Smith, in Hiram after having flown to and from the Dallas, Texas, area earlier in the week for an interview with the folks at Carollo.

Her time at Tech was tough. At first, she was in the weeds.

“She struggled a couple semesters, but she never brought it to the track,” Page said. “She always managed to get a decent grade out of it.”

Smith worked through everything, and is about to jump into the world for real with a nice job either in Atlanta or suburban Dallas.

She’ll take memories with her.

“Definitely the people, coach Page, the track team,” she said. “I was able to meet a lot of people. Being in Midtown is great. I went to a lot of concerts. Great memories.”