There’s a unique bond between champion athlete and coach.

It’s a bond that creates a special trust, allowing the coach to push the athlete, sometimes pushing the envelope in the process. Ideas that might sound crazy make perfect sense to them.

Bria Matthews and Georgia Tech’s jumps and hurdles coach Nat Page have that kind of bond and that kind of trust.

Together, Page, whose resume includes developing more than 40 ACC champions and All-Americans, and Matthews, one of them with a desire to return to that level, put their heads together, shook things up and shook off what had been an unshakable injury, with an idea that sounded unfathomable yet one they made reality, and with championship results.

Matthews, a computer engineering major, who recently graduated with a 4.0 GPA, reprogrammed the jumping scene from the jump. As a freshman in 2016, she set Georgia Tech’s indoor and outdoor records in the long jump and the outdoor record in the triple jump. She earned gold at that year’s ACC Indoor Championship in both events and also won the Outdoor triple jump. Following the Outdoor Championship, she competed at the U.S. Olympic Trials in both events, finishing 12th (42 feet, 9.5 inches) in the triple. The accolades kept coming in, being named ACC Freshman of the Year while also making the Academic All-ACC team.

That October, recurring pain in her right leg forced her to cut back on training, and she redshirted the entire year. After competing in three indoor meets in 2018, she again had to shut it down because of her right leg. This time, she had surgery and had a rod inserted in the leg.

In September, student-athlete and coach decided on a new, more radical strategy — jump off the left leg. In an event some athletes don’t master with their natural leg, Matthews was determined to not only re-learn how to jump, but compete and win.

“It’s kind of like having been a right-handed batter your whole life and now, for some injuries, you have to start all over, batting on the left side,” said women’s track and field head coach, Alan Drosky.

“I just didn’t feel I could jump off my right leg, and I really wanted to jump,” she said. “I thought this was a way that I would be able to jump without hurting myself.

“It was a lot of building strength in my left leg. It was also getting the coordination and technique right, because I learned everything off of my right leg. I had to re-learn muscle-memory in my left leg.” 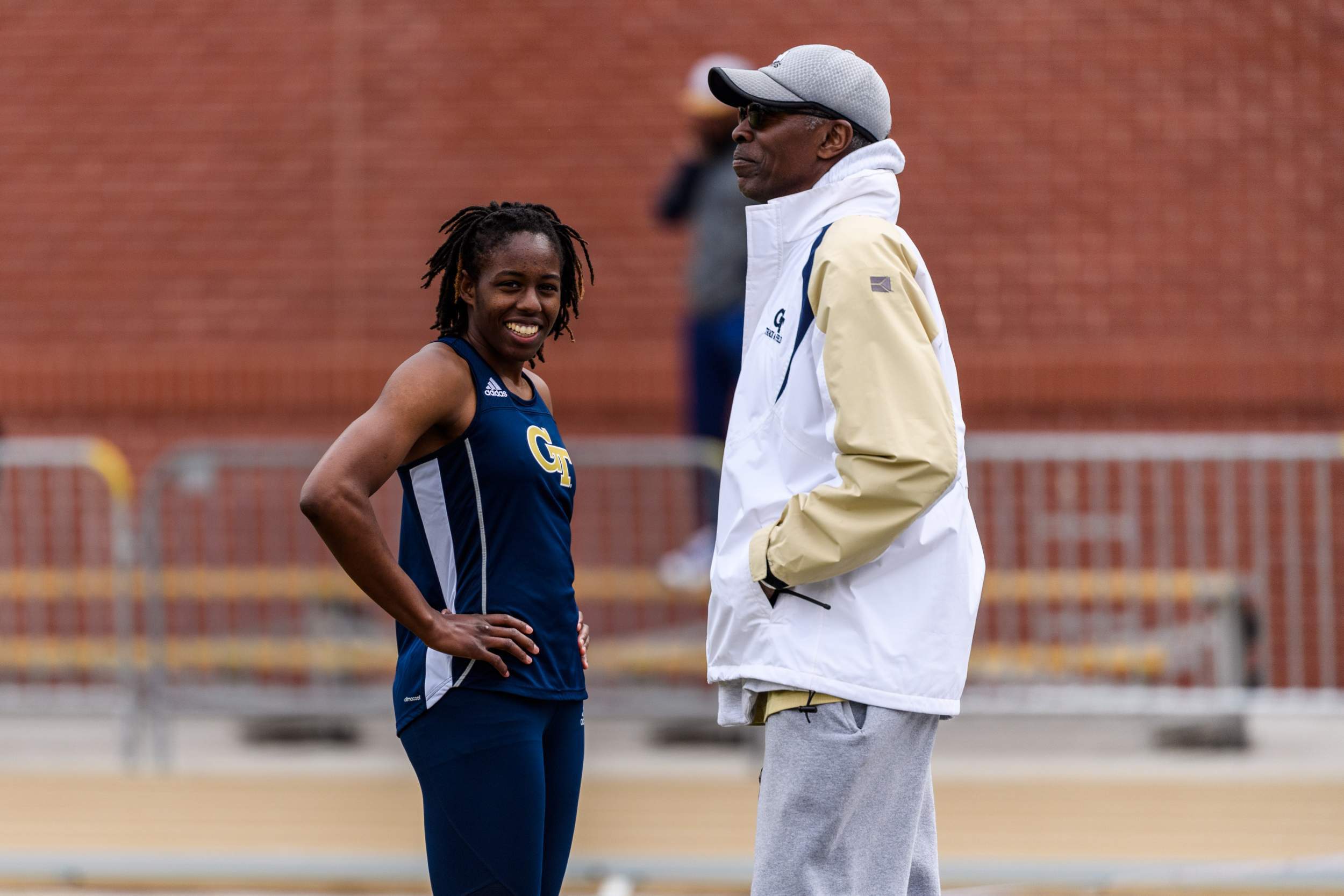 Coach Nat Page (right) estimated that with Matthews running at approximately 14-to-15 miles per hour, her takeoff and landing put her in the neighborhood of 700 to 900 pounds of pressure on the leg every jump.

She had an advantage of the coach in her corner.

“(Coach Page) is pretty open to what I feel like I can do,” she said.

Page feels what she’d already done worked in her favor.

“A lot of the drills cross over,” he said. “Because you do alternating bounds, and then you’re doing hop-hop-step, the other side of the body is learning also throughout the process. Her left leg got to do some of the stuff that her right leg was doing throughout the years she’d been triple-jumping. That makes it a little easier, but you still have to deal with the strength and the timing of doing the hop on the other side of your body.

“She would never give up,” Page added. “She never has throughout the whole time.”

Not knowing when to give up — or even stop — actually became an issue as Bria got stronger.

“The hard part was backing her off of training,” he said. “Once she started practicing, she was like, ‘Hey, I can start to do some of this.’ She wanted to do more and more. She’s a competitor and was ready to get back to jumping again.”

On Jan. 11, 2019, she did, long jumping at the Clemson Orange & Purple Elite, recording a 17-11.5. The following week she debuted in the triple jump at the Vanderbilt Invitational, going 38-5.5. Matthews returned to Clemson the following weekend for the Clemson Bob Pollock Invitational, where she broke 40 feet in the triple and hit 18-2.25 in what would be her final long jump of the indoor season.

Hitting 40 at that meet was a big moment.

“I said, ‘We are scoring at conference!’” Page recalled. “Within the same week I said, ‘We’re going to jump 42 feet. We are going to be on the podium. I don’t know which order, but we will.’”

Page proved prophetic about her scoring, but actually underestimated Matthews’ distance, as she went 43-4.25, to take home gold.

Matthews was back, but she wasn’t done.

Two weeks later at the NCAA Championship, she earned All-America honors with a fifth-place finish, going a personal-best 44-3.5. That jump topped her previous high, set in her freshman year, by 4.5 inches. Matthews qualified for the finals on her final jump of preliminaries, then set a personal best on her final jump of the finals, which allowed her to leap from 10th to fifth.

“It felt really good,” she said. “At the start of the season I didn’t expect to jump this far. I didn’t think I was going to triple jump this season and then I did and I did well.”

“The bigger the stage the better she tends to perform,” said Drosky. “She had a goal she had hoped to accomplish and wasn’t going to be denied. I don’t know that you can script it up better than that.”

“Coach Page doesn’t like that,” Matthews said, with a laugh.

“No, I don’t,” he said. “She wants to build up to her best jumps. Let’s just do this early, and we don’t have to worry. It would be so much easier on you. We’re going to figure this out.” 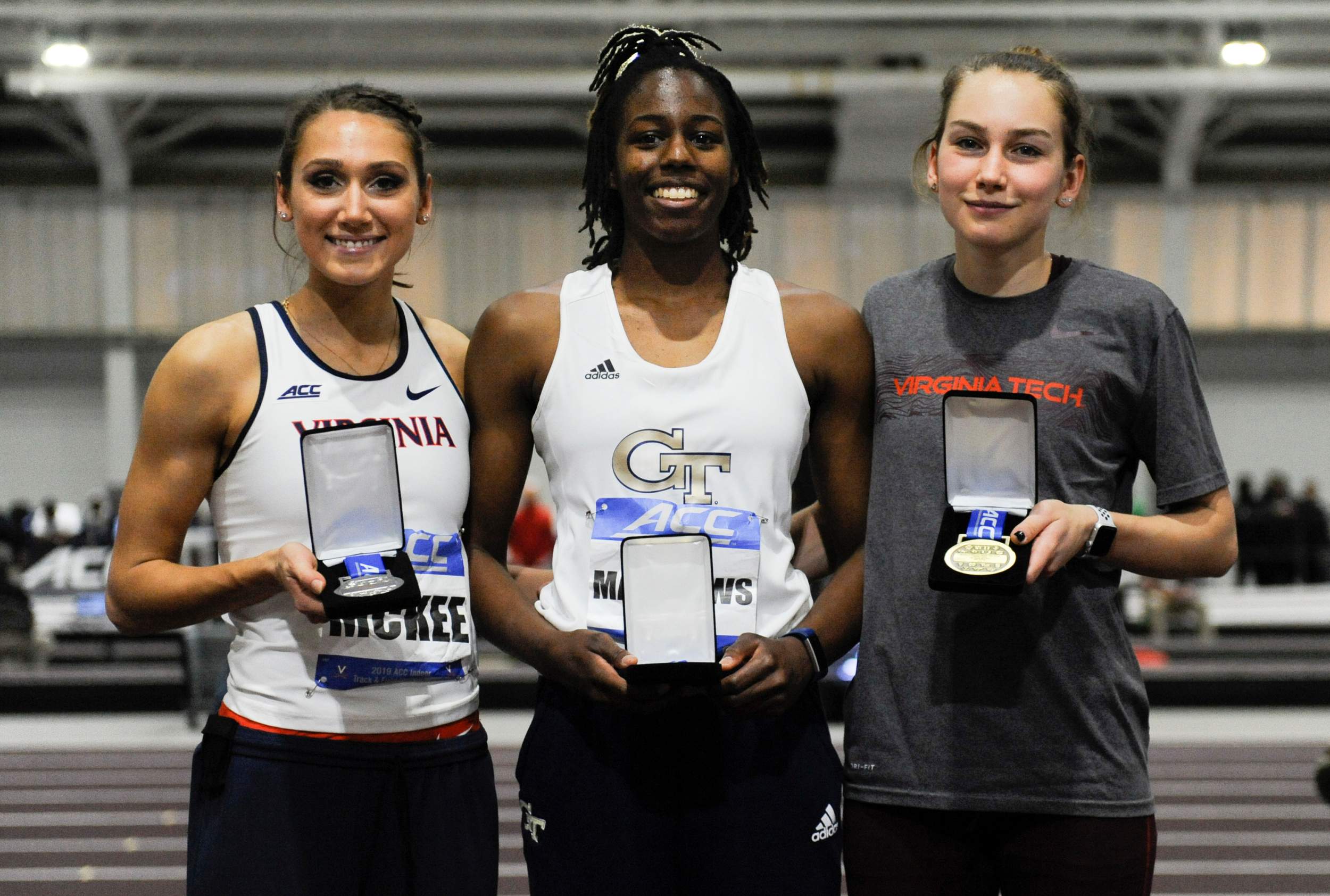 Matthews figured it out throughout the outdoor season, starting at 38-5 in the season-opening Yellow Jacket Invitational, then never finishing below 40 feet, topping out at the Tiger Track Classic, at 43-3.75.

She heads toward the future with confidence and, more important, health.

While she’s the school-record holder in the long-jump indoors (21 feet) and outdoors (21-2.75) and the outdoor triple jump (45-0.5) — all from her freshman year — and ranks second at the indoor triple (behind Brandy Depland’s 2006 jump of 44-9.75) Matthews has plenty to shoot for and two years of eligibility to do it.

Interestingly, any records she sets would mean her actually breaking records going off her left leg that she set going off her right.

That would be quite a legacy — one that’s not only hard for her to wrap her head around but impossible for her to put into words.

“To be the best triple-jumper the school’s ever seen,” Page stage-whispered.

“She’s extremely modest, so she won’t say it, but that’s what we’re shooting towards,” he continued. “When she comes back here in five, 10, 15, 20 years, she’ll realize how much work she’s done, how many lives she’s impacted while she was here, or what kids may want to come here because she left such a jump legacy here. I think everybody should know who she is, what she’s done, what she’s gone through and what she’s going to get.”

“I hope her legacy involves more scoring at nationals and before she’s done, winning the nationals, but it will be a legacy of jumping far when it counts the most and bringing great enthusiasm to her sport and to competition,” Drosky said. “Her comeback story, in the end, may be her legacy, as well. Just to never give up, the ability to overcome great obstacles. It’s certainly a valuable lesson and a great story for a lot of people to come.”

Matthews admitted there is a chapter to come, one she’d like to write as soon as 2020.

“I want to go to the Olympics,” she said — a declaration Page greeted by exclaiming ‘Yay! She finally said it!’ “I think I can make it to the Olympics.”