There are all kinds of adages about revenge, ranging from the profundity of Francis Bacon — “A man that studieth revenge keeps his own wounds green,” — to “Revenge is a dish best served cold,” a Hollywood creation credited to the villainous Klingons, in Star Trek II: The Wrath of Khan.

Georgia Tech isn’t buying into either of those or any other — at least openly — when it comes to Duke, the foil for Saturday’s annual homecoming game. The Yellow Jackets are more about where they want to be than where they’ve been.

“It’s a brand new team, it’s another game and it’s important to both teams,” said head coach Paul Johnson. “If you want to stay alive in the conference race, it’s a huge game. For both teams, it’s trying to get another win. They’re all hard. It’s a home game for us. It’s an important game. We need to put our best foot forward.”

After Johnson started 7-0 against Duke in his first seven seasons on The Flats, the Blue Devils have won three of the past four meetings, including last year’s 43-20 drubbing in Durham. However, the Jackets’ one win during that stretch was 2016, a 38-35 win on homecoming weekend at Bobby Dodd Stadium.

Georgia Tech feels it’s ready to make that history repeat. Offensively, they’re hitting on all cylinders, having scored 129 points over their past two games. They’ve scored 17 times (16 touchdowns and a field goal) in their last 18 possessions (not counting the victory-formation possessions at the end of each game) and have rendered freshman all-America punter Pressley Harvin III the biggest fan on the field (a story chronicled by Andy Demetra in this week’s “Inside The Chart“).

But Johnson knows that denying Duke only its third winning streak against Georgia Tech since the Jackets officially began Atlantic Coast Conference play in 1983 is more on the defense than on the offense.

“We haven’t slowed them down. The same stat I just gave you [scoring on 17-of-18 possessions against BG and Louisville], that’s about what [Duke has] done to us,” he said. “If you go back to two years ago starting the second half, I think they’ve scored on like 13 of 15 [possessions]. We’re certainly not going to win the game if that continues. They’re too good defensively. You’re not going to score every time you get the ball, probably.”

Some Jackets will admit that last season’s game still sticks in their craw. But the overwhelming feeling on the whole is that of dismissiveness and a “That was then, this is now” mentality. 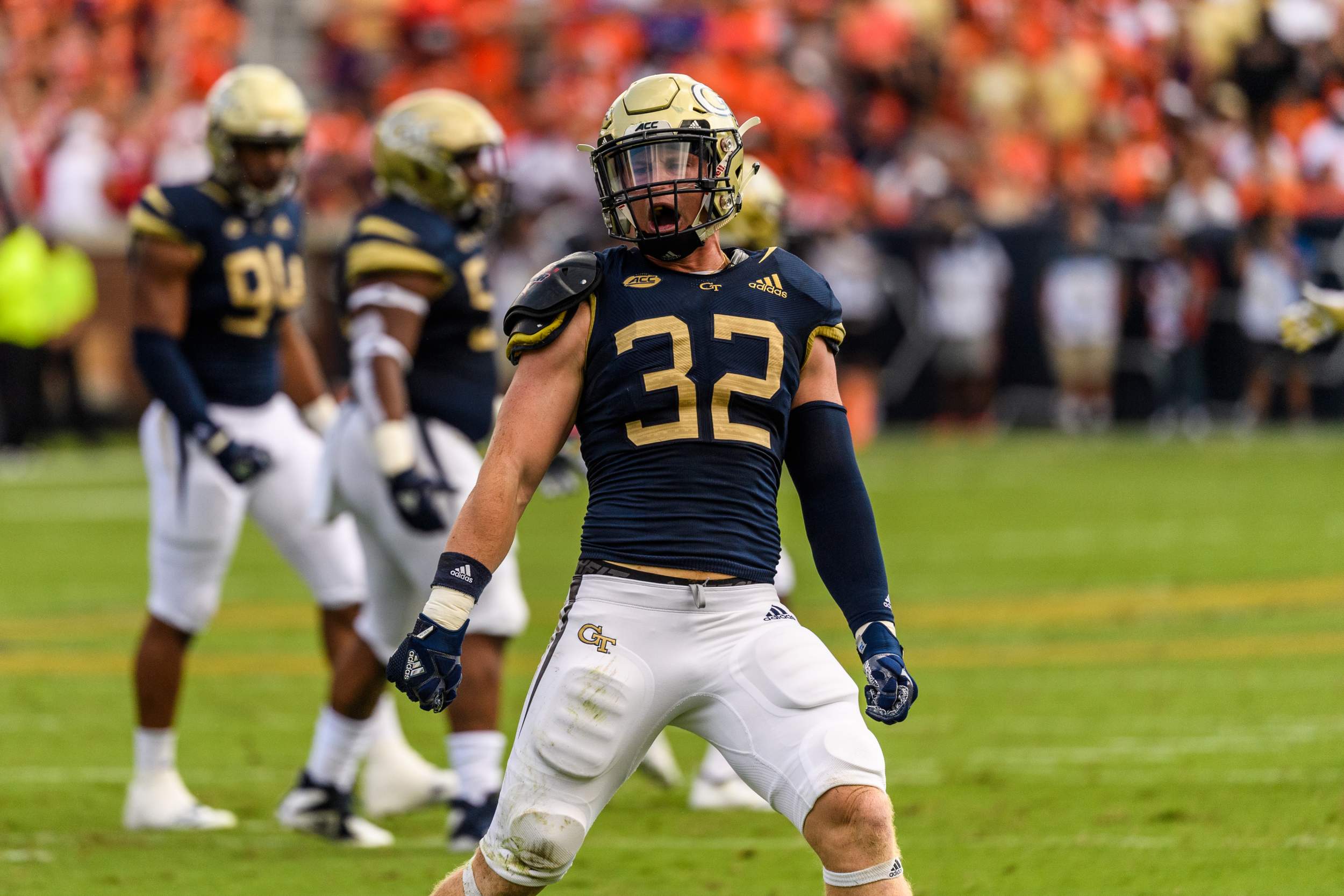 “Let’s just say we’re looking forward to this week,” said junior inside linebacker David Curry (above). “We want to come out strong and play as well and better than we did this past week … All of us are amped up and we’re very, very excited about this game.”

Redshirt freshman cornerback Tre Swilling was wary of getting too caught up in the Jackets seeking their pound of flesh.

“It’s when you kind of focus on the revenge factor and the redemption factor where things start to get out of hand. You misalign, you misread your keys and everything else,” said Swilling. “You just want to go out there and do your job, continue the progress. If we happen to get up and we’re able to get some stops and get the win and anyone wants to call it a revenge game … We just want to get a ‘W.’ That’s it.

“Since we don’t have the same defensive coordinator, we kind of just want to focus on what we’re doing this year. Just taking it week by week,” he added. “This is the biggest game that we have all season because it’s the next game.”

Duke’s offense appears to be middle-of-the-pack in the ACC, ranking eighth in scoring (32.8 ppg) and ninth in both rushing yards (189.8) and passing yards per game (217.4). But Johnson isn’t getting caught up in numbers, especially over the short term.

“If you look at stats, I’ve always said, ‘You’ve got to look at it as a body of work. You don’t go off one game or two games,’” he said. “Over the span of the season it’ll work itself out. Louisville’s pass defense is going to look really good after last week’s game, right? But if you take it out over the whole gamut, they’re usually pretty close to what they are.”

On the other side of the ball, Johnson feels his Yellow Jackets are pretty close to what they usually are around the time they’re usually there.

“When I was coaching at other places, we used to talk about teams probably ought to get us before October because once we got to October, they didn’t have much luck because we were pretty good at doing what we did and played pretty fast,” he said. “We’ll see if this team can do that. We’ll find out on Saturday because [Duke is] good defensively.”

Quarterback TaQuon Marshall doesn’t expect to continue scoring nearly 65 points a game, but does believe the unit is starting to get up to speed — Johnson-level speed.

“I think we’re really clicking right now. I think everything’s going the way we want it to go,” said Marshall. “I think everyone knows what they’re doing. We’re keeping it really simple right now. So it’s kind of hard to mess it up. But the missed assignments are down every week. So as long as that keeps going down and guys are playing hard, the effort’s there. That’s not the problem. As long as that keeps happening each and every week, we’ll be completely fine. It’s just everyone being on the same page.” 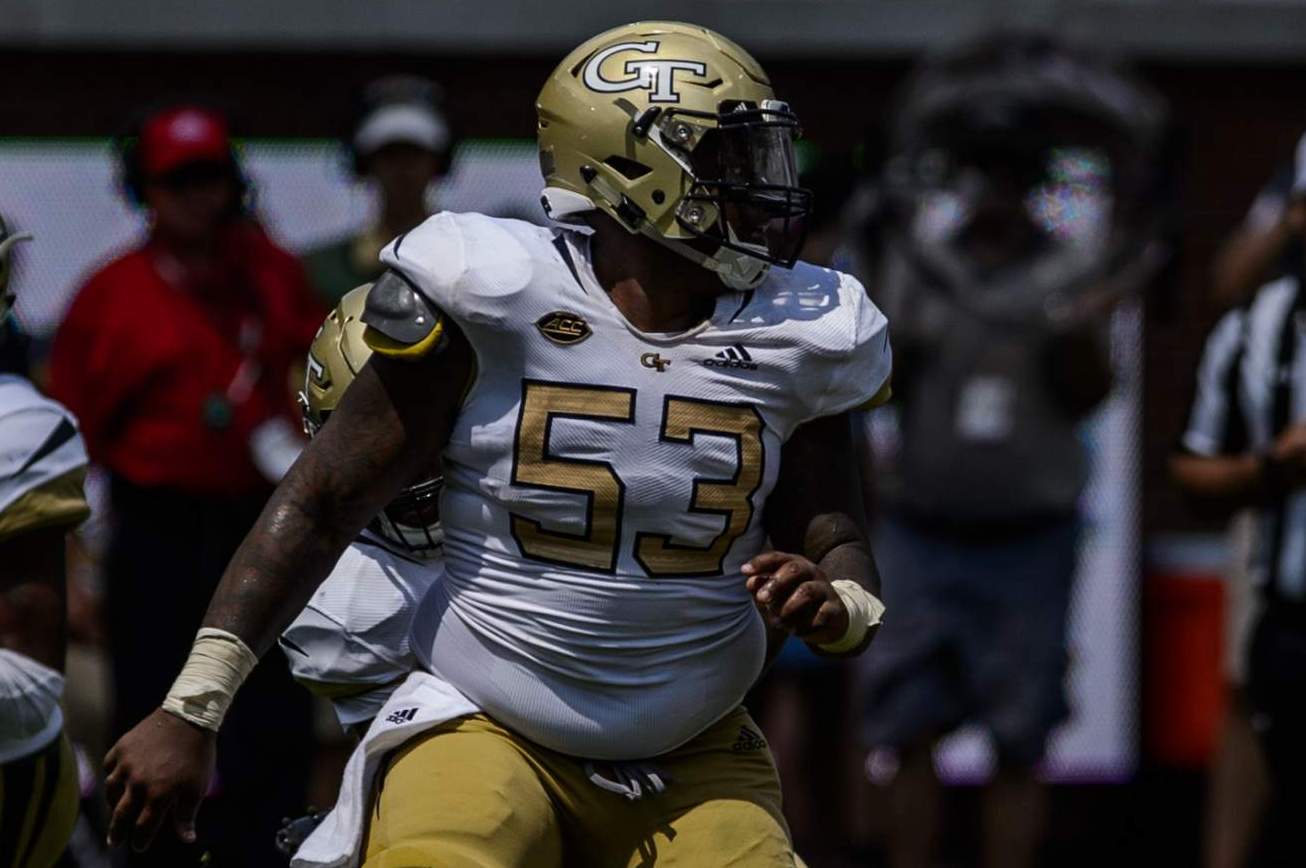 Center Jahaziel Lee (above) can feel the difference and feels he and the entire offense are more relaxed.

“We definitely are. When you’re putting up 60-plus points a game, you’re doing something right,” he said and smiled. “I would say everybody just being on the same page and focusing and buying in. We have the opportunity to turn this season around and we’re taking advantage of that opportunity.”

A-back Clinton Lynch credits the Jackets not beating themselves as a key to their recent success and to winning Saturday. That’s something they did not do last year in Durham, especially in the second half, as the game was tied at 20 at the break.

“I don’t think we were executing that well. It was more self-inflicted stuff,” he said. “We can’t have that this year. We have to keep buying in and keep focusing.”

And what kind of role will revenge play?

“That’s always in the back of our minds but we’re just trying to go 1-0 this week,” he said.

The Jackets seem to have found something with their one-game-at-a-time approach and seem to be getting it together on both sides of the ball.

“That’s how we expect to play and that’s how, as a locker room, all of us want to know that’s what we can do,” said Curry. “I feel like these past two weeks, we have shown that we’re taking steps to get there. If we can continue to do that we’ll show everybody just how good we are.”

With head-to-head games within the Coastal Division against Duke, Virginia Tech, North Carolina, Miami and Virginia all still ahead, the dominoes could be lining up just right.

“I’ve said all along, let’s play out the year,” Johnson said. “I don’t know what’s going to happen from here on but before you jump off the bus, you at least oughta get on the main road. You’ve got to see where the thing’s going.”