#BestOfGT: A flashback to Camryn Hidalgo’s triumphant ACC Championships performance on the boards. The junior Yellow Jacket would become just the fifth diver all-time between the men’s and women’s teams to qualify for all three boards at NCAAs, as well as earn a Olympic Trials cut in platform.

“Of all sad words of tongue or pen, the saddest are these, ‘It might have been.’”
― John Greenleaf Whittier

Potential is wonderful, but it’s not worth much if it’s not lived up to.

That can be hard, as sometimes circumstances can take control of that potential out of the athlete’s hands.

Camryn Hidalgo has survived such circumstances and tapped into some of her potential two weekends ago at the ACC Swimming and Diving Championships, where she made Georgia Tech program history by becoming the first woman diver in more than a decade to bring home two medals at Conference championships — gold on the 1-meter, silver on the platform.

But this tapping in came only after much introspection and her refusal to be haunted by those words from Whittier. Hidalgo’s heroics at the Greensboro Aquatic Center are the culmination of an inspirational comeback from the dark, uncharted road of concussions, which began at that same facility two years earlier and would take more twists than one of her acrobatic dives.

“That’s the thing, her season was not all at full-strength,” said Georgia Tech diving coach John Ames. “She didn’t compete in our invite, she didn’t go on our training trip to Hawaii. She had to actually miss two months of the season this year, in November and December. All of that combined with what happened with her [during] her freshman year, that really made this so special.”

“You could just see her dialed in, from the very first dive that she did on 1-meter and then throughout the whole week,” Ames added. “She was really on her ‘A Game.’ Really in practice I noticed that she was really sharp on everything. Cami’s a different athlete than what I’ve had before. I’d say maybe one or two athletes in the 19 years that I’ve been here have really been able to get into a zone like that and really be the top performer at the meet, which I believe she was.”

Hidalgo admitted she was both nervous and dialed-in at the meet.

“I’m always very nervous to go into meets. I’m a very nervous person,” she said, with a laugh. “So I have to dance around and listen to music to get comfortable. It’s pretty much any song I can dance to. [At ACCs] I only listened to one song. It was called ‘Breaking Me,’ by Topic. It’s a very jazzy song. It’s very cool.”

The refusal to be broken is what makes the ongoing story of 2020 “Championship Season,” beginning with ACCs, so satisfying. 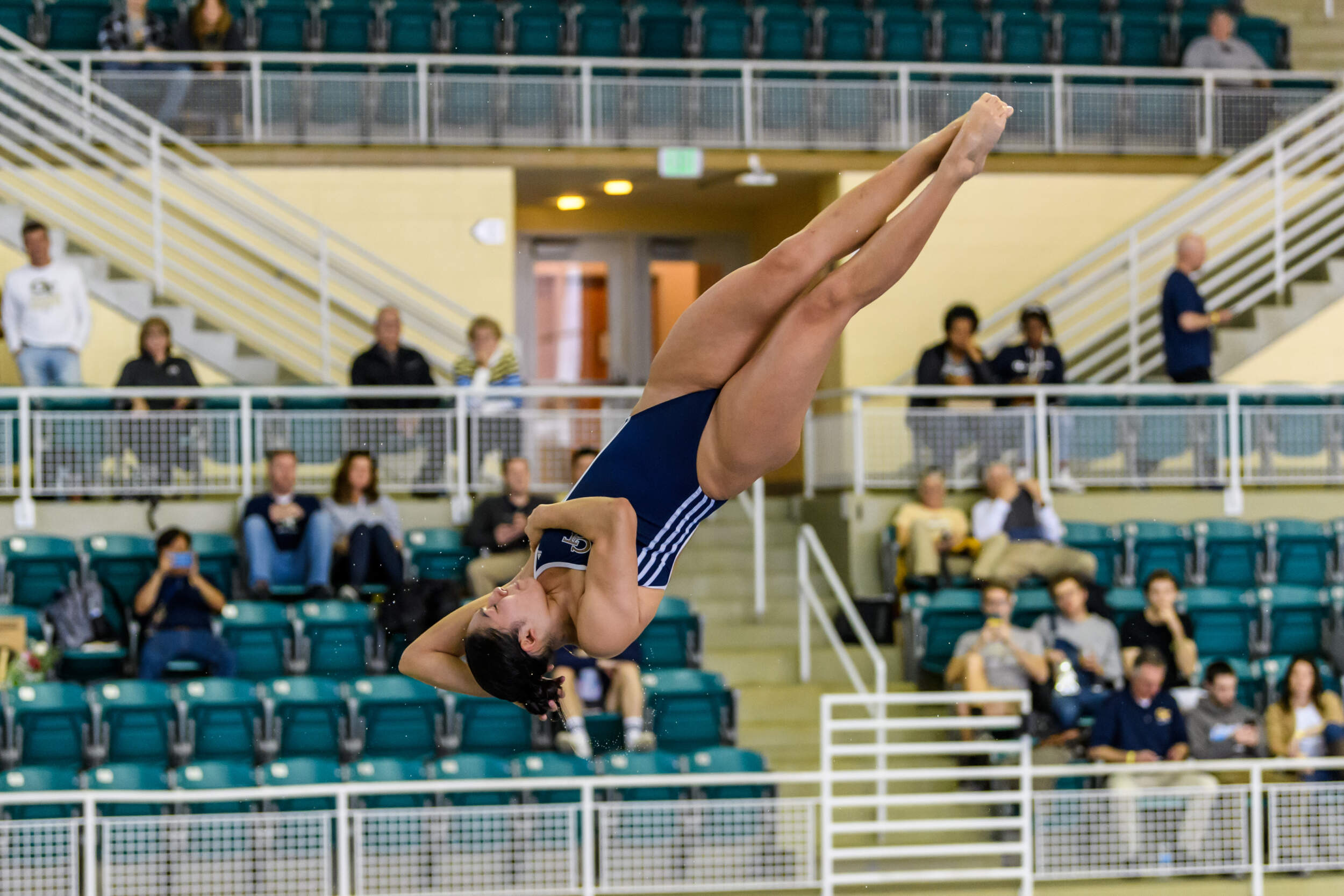 One of the nation’s top junior divers, the Mission Viejo, Calif., native started at Georgia Tech with a bang. She earned back-to-back ACC Diver of the Week awards (Oct. 24 and 31) and set the current school records in the 1M and 3M — she’s second all-time on the platform. But everything changed in Greensboro. During warmups for her first event, the 1-meter, she hit her head on the back of the board, suffering a concussion. Her season over, she’d begin the scary journey into the world of concussion recovery. She’d use her sophomore year to regain her form — netting her a third at ACCs at 1M — but a setback heading into her junior year returned her to the frustrating world of recovery and inertia.

“The most difficult thing for me is I get really frustrated not knowing exactly at what state I’m at for health,” she said. “I don’t like how you have to write down your symptoms.”

“A lot of the questions are like, ‘Are you tired?’, ‘Are you stressed?’ I’m a college student, of course I’m tired and I’m stressed and I’ll get headaches from time to time,’” she added, with a laugh. “I’m also the type of person where I don’t like to not do anything. When you have a concussion, the most important thing is to just rest. It stresses me out not being able to do school work or dive so it’s kind of like I’m just prolonging all this work, which stresses me out even more, which doesn’t help me heal. It’s just frustrating in a sense that you can’t do much.”

Hidalgo, who also was ACC Academic Honor Roll as a freshman, overcame the enormous backlog of school work and regained her edge on the boards, but the setback as a junior, which forced her to miss November and December, had Ames considering offering her a redshirt for the remainder of the season.

“I was a little bit nervous just because I felt like I didn’t have enough time to really prepare for the meets, but at the same time, I didn’t necessarily want to wait another whole year to try,” she said. “I just wanted to put in my mindset, ‘Where I am right now is fine. I just need to be confident in my ability.’ I know I have all the capability within me but it was more just the mindset, needing to turn that around. I think I would have regretted redshirting and wished I’d have just stuck it out for the season.”

“These meets are so big and they’re so fun and I really love these seniors,” she added. “I think I would have been upset if I didn’t get to experience one last meet with them.”

“She was getting over her concussion and still hadn’t competed,” Ames recalled. “I mentioned the possibility of seeing if she could get a medical redshirt. She said, ‘No. I’m going to be ready.’”

Ready she was. Over the season’s final three meets against Auburn, at South Carolina and finally vs. SCAD and Georgia Southern, she took the 1M in the final two meets and swept at 3M.

That set the stage for round three of ACCs. 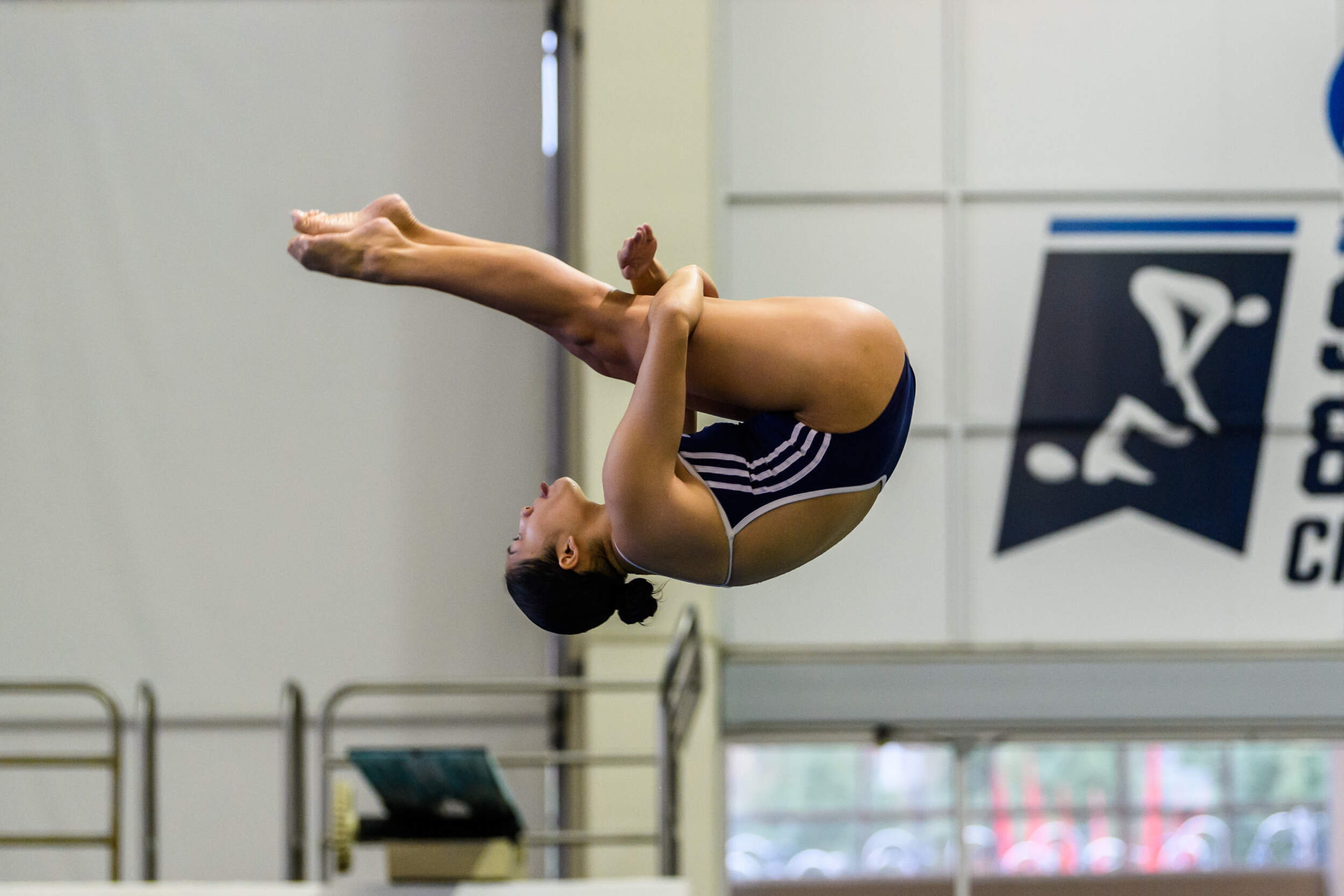 “Going into my sophomore year, I was really nervous just being back at the pool. I didn’t know what to expect because it was such a fluke accident,” she said. “But I knew I wasn’t going to get hurt. I stopped doing the dive. So it was really just trying to get me back into my comfort zone and being able to kind of trust myself in a high-stress environment. So it wasn’t necessarily like I thought I was going to get injured again coming back to this pool. It was more just trying to settle my nerves and getting really comfortable with the environment.”

Practice the week of the meet helped.

At 1M, Hidalgo was second after preliminaries, then took the event by a healthy margin, as her 313.10 was nearly 13 points ahead of Florida State’s Molly Carson (300.85). The next day, at 3M, she put in a strong fifth — Ames feels she’d have won the event but for one of the few dives all week that she didn’t hit. Finally, on the platform on the last day of competition, Hidalgo jumped from sixth after preliminaries to second, behind Carlson.

The medals made Hidalgo the first Yellow Jackets multi-medal-winning diver at ACCs since Stephanie England 12 years earlier, only the second GT women’s diver and fourth Jacket ever in the program to do so. But personal accolades took a backseat.

“It’s just nice feeling like I gave back to my team,” she said. “That’s always my biggest thing when I go into meets. I want them to be proud of me. I know they’re proud of me regardless but I want to do my best so I can contribute what I can.”

Ames was especially proud of the result and is happy to hear her continued “I told you so’s”.

“For her to just get it all back together just in time for ACCs was awesome,” he said. “Cami is an outstanding diver and it was great to see her come into an ACCs healthy and really put on the performance that we all know that she’s done in the past. Injuries over the past couple of years kind of prevented her from being at her best at this time of season. It was just great for it all to come together this ACCs.”

There was little celebrating, however. Instead it was back to the boards in preparation for Zones. Zone B offers a loaded field — something Ames feels is perfect for Hidalgo.

“I think the tougher the competition, the better she gets,” he said. “She has all the tools and I think that she knows that she can be competitive with everyone there. The ACC is one of the top diving conferences in the country now so if she can do it there then she can do it at the Zone Meet, too. I think she realizes that. I do think that she raises her game when she sees the competition. She definitely doesn’t back down from it. That’s for sure.”

“I am a really big competitor and so I do think it helps to have competition to get me fired up but at the same time, you don’t want to be nervous,” she said. “You want to be calm. A lot of times your best performances come when you’re having fun and you’re just enjoying the moment. So I think there are pros to both situations. I think it’s fun that we’re a loaded zone because it makes things interesting and really fun to watch. It’s fun having good competition. I think it’s good to have a challenge.”

The mechanical engineering major believes she and Ames have drawn up a perfect six-dive blueprint for Zones (March 9-11) then, ideally, the NCAA Swimming and Diving Championships (March 18-21) — both to be held at the Ramsey Center on the University of Georgia campus.

Ames knows that after all Cami’s gone through, the sky’s the limit.