Believe as much you want about the accuracy of the signs of the zodiac, but sometimes they’re just too spot on to be coincidence.

We sit on the tail end of Aries (March 21 through April 19). Here are some of the traits and a general profile for the Ram.

If an algorithm existed to go through Georgia Tech Baseball’s all-time roster and pull out players that fit that Aries mold, Jason Varitek and Mark Teixeira likely would come right up.

It’s fitting, then, that Varitek and Teixeira actually not only ARE Aries but that they share the same birthday, April 11.

Yellow Jackets head coach Danny Hall also was quite surprised by the co-birthdays.

The results of the Jackets’ teams upon which both played (Varitek 1991 through 1994, Teixeira 1999 through 2001) and the impact they had on their teams more than hinted about the astrological link Aries. Similarly, it applies to their stellar Major League careers, where they defied the sport’s law of averages regarding longevity by nearly a decade. Varitek thrived for 15 years, Teixeira starred for 14 in a career that, according to a 2007 study done by the National Center for Biotechnology Information (NCBI), is supposed to last 5.6 years.

While it may be Ouija board karma that (cue spooky music), both Varitek and Teixeira were born in nine-letter cities in eight-letter states beginning with ‘M’ — Varitek in Rochester, Michigan, Teixeira in Annapolis, Maryland — there’s nothing mystical about why they chose Atlanta and Georgia Tech, over professional baseball — Varitek was a 23rd-round pick of Houston in 1990, Teixeira a 14th-rounder of Boston in 1998.

“The program was top-notch, everything first-class,” said Varitek. “There were so many fits when I took a visit to Georgia Tech. The education was top-notch, which made my dad happy. For me, I wanted to get away from home and go off on my own. It was far enough away.” 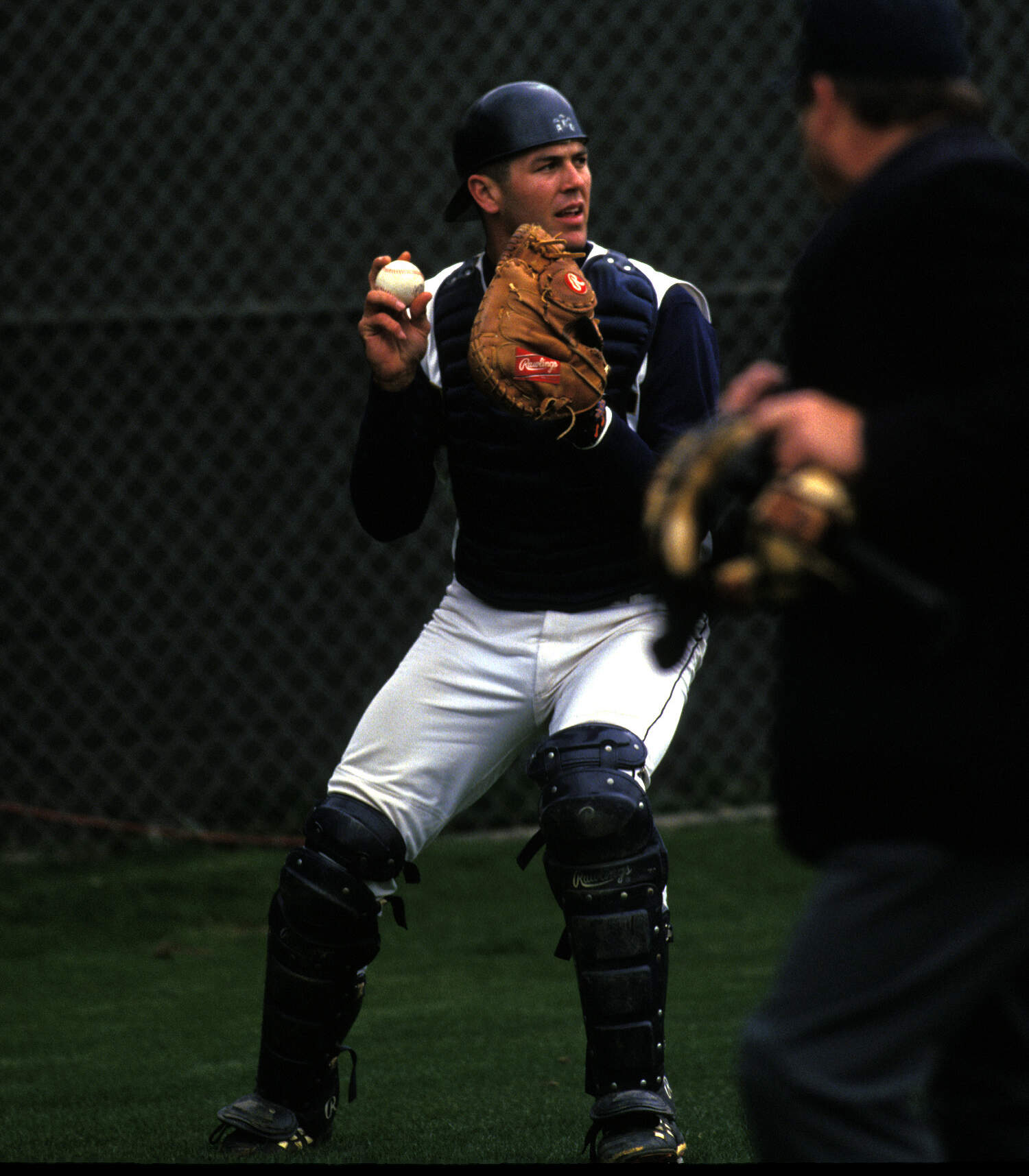 “I did take pride in my academics but, frankly, I majored in baseball,” said Teixeira, who was an Academic All-American in 2000. “Everyone goes to college for a reason. They want to develop a skill and the skill that I developed was playing baseball. I tell everyone, ‘I majored in Baseball and monitored in Business.’”

Hall coached Varitek his senior year, in 1994, — his first season as head coach — and Teixeira, who he recruited, all three years.

He sees plenty of similarities.

“The first thing that sticks out is both were switch-hitters but both were very hard-working, competitive, focused guys. Nothing was going to get in their way,” Hall said. “They carried themselves like they were a champion, they worked hard every day to be a champion and they were great competitors when it came time to play in the game. They were both tremendous players. I’m not surprised at the success they’ve had.”

That success began immediately for both, as each was named ACC Rookie of the year — (Varitek in 1991, Teixeira in 1999) — and didn’t ever stop until they left for pro ball.

“The first swing that I see him take as his coach at Georgia Tech, he hits a home run against Minnesota in the first game. He proceeded to go 8-for-10 that weekend and we won all three games,” Hall recalled. “I’m in the coach’s office after the series and Varitek walks in. He looks at me and he says, ‘What time are you going to get here tomorrow? My swing doesn’t feel right. I want to work on my swing tomorrow.’ He knew himself so well and his work ethic was so great that he wasn’t going to be satisfied being 8-for-10 with a home run the first weekend. He knew he had to keep working to get better. That’s why he was such a great player, and great leader for us, and why he was a great player for the Boston Red Sox.”

Teixeira showed similar drive right out of the gate.

“From Day One, not only was he gifted talent-wise, but he had great work habits, he had great focus,” Hall said. “He was focused, certainly, on baseball, that was important to him, but he also did not lose sight that he had a chance to get a great education at Georgia Tech and he took advantage of it. He was an Academic All-American. I think that says a lot about his character and his makeup.”

But the individual honors were secondary to team success, of which there also was plenty — including a combined 5-0 on their birthdays (Varitek 2-0 vs. Duke, Teixeira 1-0 vs. Duke, Mercer and Georgia Southern, by a combined total of 58-22 margin).

Varitek led the powerful ‘94 Jackets squad to the championship game of the College World Series in the program’s first trip to Omaha.

“There are so many memorable moments,” he said. “(Brandon) Hensley playing third, big hit after big hit, Scott McIntyre having a great senior year at second base, Jay Payton, one of the most memorable moments was hitting a home run on a ball that skipped, Nomar (Garciaparra) gets dehydrated in the Regionals. They had to rush him to the hospital, he gets an IV, comes back and is able to pinch-hit in the second game, 100-something degrees on turf and hits a homer, and puts us ahead. (Brad) Rigby, strikeout after strikeout. Our closer Chris Myers, works out of a less-than-two-out jam, with the tying run on third. There were just different pieces. Al Gogolin took the ball every day like Rigby did, big home runs, Scott Byers and Matt Saier. It was just a really unique group of people.”

Teixeira proudly points to the ‘00 Jackets, Georgia Tech’s first to complete the sweep of ACC regular-season and tournament championships. The group featured second baseman Richard Lewis, who would play with Teixeira for Team USA that summer, catcher Bryan Prince, and pitcher Cory Vance, all four also in the school’s Sports Hall of Fame, as well as superb, but underrated shortstop Victor Menocal and pitchers Rhett Parrott, and Steve Kelly and closer Jeff Watchko. 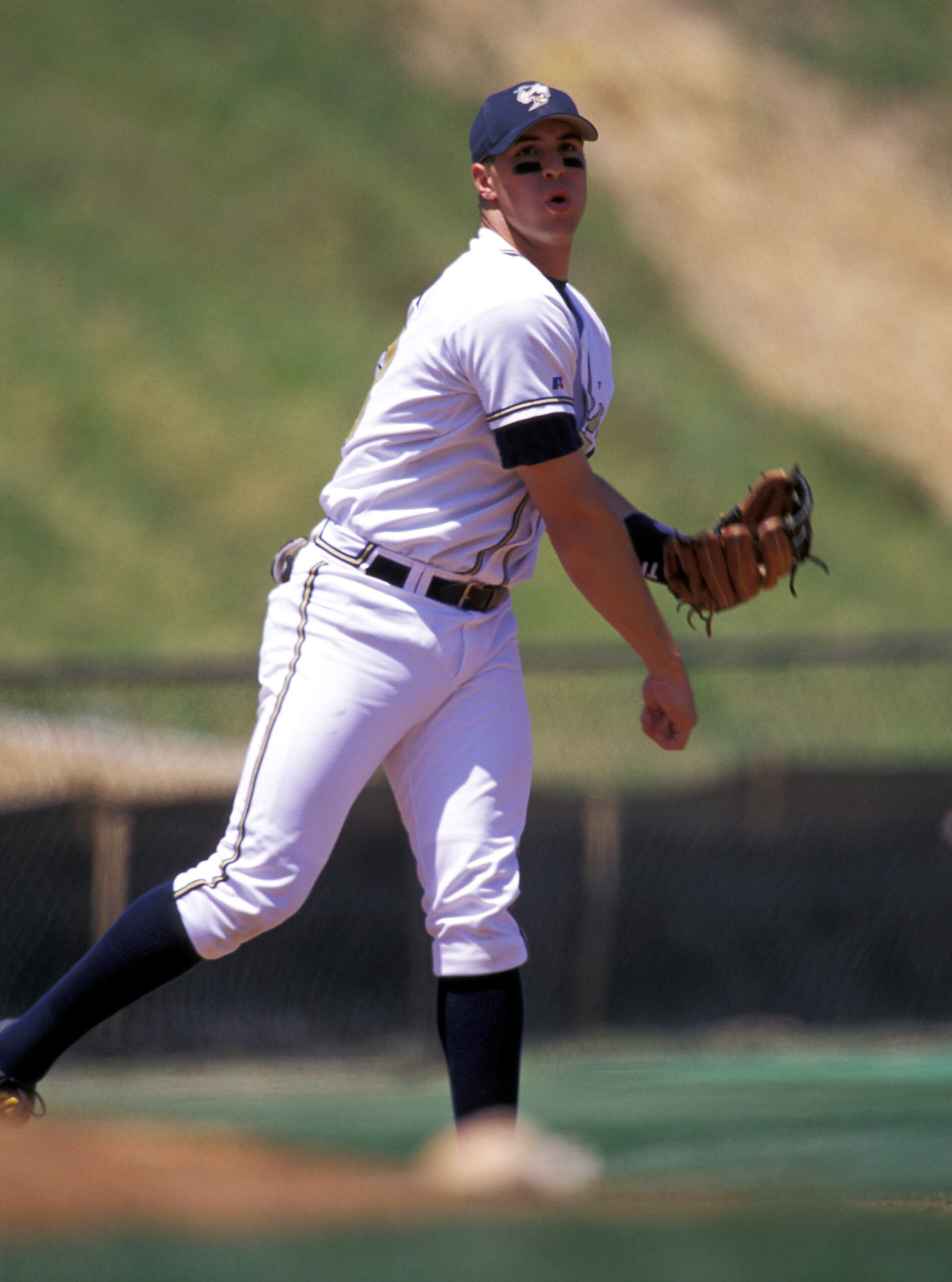 “I loved our balance,” he recalled. “We had such a great balance of starting pitching, relief pitching, our lineup was incredible. I think we had seven guys drafted from our starting nine. So you look at the amount of talent that we had and we truly enjoyed playing together. We had a very close team and that’s what made it so good.”

Both players left their marks on the programs record books. Each won a triple crown (Varitek did it in ‘92 and ‘93, Tex in ‘00), Varitek leads in just about every career offensive category and has top-10 seasons in almost every category. Teixiera is top 10 career in several offensive categories — he may have challenged Varitek with a typical Teixeira senior year — and similarly can be found among top-20 single-season offensive categories, including scoring a program-best 104 runs in 2000.

They’d each get drafted in the first round of the MLB June Amateur Draft (Varitek 14th overall by Seattle in 1994, Teixeira fifth overall by Texas in 2001). They’d become rivals in the Majors from 2003 until 2011, when Varitek retired (Teixeira would play through the 2016) and bitter rivals those final two years as Varitek played for the Red Sox, Teixeira for the Yankees.

While rivals, each had plenty of respect for the other.

“He played a great first base. He was a ground-ball-eating machine that had the wingspan of a condor,” said Varitek, with a laugh. “He was extremely powerful, big time pop, just produced year after year. You just tried to keep him to the least amount of damage as possible.”

Teixeira had as little joy seeing Varitek behind the plate as Varitek had seeing Teixeira come up to hit on either side of it.

“I always HATED playing against Varitek because he was the smartest catcher in the league. I was hot, he did his homework to know to do something else or if I was cold he did his homework to make sure that he kept me cold,” said Teixeira, a career .268 hitter, who hit .241 career against Varitek’s Red Sox, .248 with the Yankees. “We had a lot of battles. It’s not a coincidence that those Red Sox teams were so good when Varitek was the catcher.”

Teixeira and Varitek DID get to play together a couple of times. Both were voted starters for the American League in the 2005 All-Star Game at Comerica Park in Detroit, and they batted 7th and 8th. Varitek went 1-for-1 (singling off Atlanta’s John Smoltz), with a walk and a run scored, while Teixeira went 1-for-3, with an opposite-field, two-run blast to right-center in the sixth inning off Florida’s Dontrelle Willis to put the A.L. ahead 7-0 and provide the winning margin in the 7-5 win.

They’d also get a chance to play for Team USA in the 2006 World Baseball Classic.

While they spent the majority of their careers standing off, there’s the overriding tie in which they stand together — the Georgia Tech connection. It’s a bond that remains solid even though their careers have moved them north.

“Georgia Tech holds such a special place in my heart,” said Teixeira, who is an analyst for ESPN, and also serves on the Georgia Tech Board of Trustees and Alexander Tharpe Fund

To these Jackets from all Jackets, Happy Birthday!