From Day One, head coach Geoff Collins has paid great attention to detail.

One detail to which Collins paid special attention last weekend was the lead-up to the gameday, itself.

“They have not gone on an away game or a home game with us and [seen] how we do things,” said Collins. “Friday afternoon we took them through our entire Friday process — our ‘Best Fridays in Football’ out in the stadium, Focus Friday, our kick script, our walk-throughs, our situational substitution patterns, Friday night dinner, our Friday night special-teams meetings, positional meetings, walk-throughs, spent the night in the hotel, our entire gameday process [on Saturday] — all the things that we do to be able to play at an elite level. Then after the situational practice, we took about 90 guys, went over to White Water park and had a really good time, bonded, signed some autographs. It was really good.”

The message to the team: everything matters. Therefore, it was important to know what can be expected in the hours preceding kickoff.

“Perfecting that process is something that we want to do,” said junior linebacker David Curry. “It was cool to go stay in the hotel where we’re going to stay for home games, but just doing that whole thing of getting outside of Georgia Tech and going to a hotel and then waking up and doing our [gameday] process, it was cool.”

The approach seems to be taking root.

“I honestly have nothing bad to say about how Coach [Paul] Johnson would travel but I will say that Coach Collins loves to make sure that all the coaches’ families are there with us, kind of enjoy the time that he gives us for family time and being able to bond with all their kids,” said senior tight end Tyler Cooksey. “It’s definitely fun and really takes your mind off of things and lets you to relax a little bit. We have a ton of young kids out there. I would say that’s my favorite part. Ping-pong tournaments going on, little kids running around, you get to chase them around. It’s fun.”

There was more than just fun. There were the meetings and some unique activities.

“We did (medicine) ball overhead slams and [caught] tennis to get our eyes right,” said junior running back Jerry Howard Jr. “Basically, it [was] get our minds right and focused. It warms our body up in a certain way, gets the lactic acid out. I think it’s great.”

The goal of all this preparation, of course, was to get the team in the right mindset for Saturday. That goal was accomplished.

“It was received really well. Not being [in Bobby Dodd Stadium] and scrimmaging the way we normally scrimmage, kind of gave it a different feel,” said senior defensive back Christian Campbell. “We did everything like a game. It wasn’t like we just came to the locker room, got dressed and went out to the field and scrimmaged. It had a more game-like feel because we weren’t where we were used to going.”

After Saturday, Collins feels good that the Jackets are going in the right direction on the field too.

“Open field, I thought we tackled well for the most part throughout the day,” he said. “We’re a leverage-based defense. I thought they leveraged the ball. It’s really good to see some of those young guys with the ball in their hands in space, in live drills, making people miss, breaking tackles, people running to the ball. So I thought it was really positive.”

Players on both sides of the ball had plenty to feel good about.

“I feel like a lot of the guys played well,” said Curry, who admitted he was most impressed by the secondary. “Overall, I felt like a lot of the younger guys got to play a lot more and I was impressed, especially with my position group — Demetrius Knight, Taylor [McCawley], Cornelius [Evans] … those guys, played really well. We’ve got some things to shape up but as a defense, we pretty much won every category that we calculate. So we were pretty happy.”

The offense also had plenty to be happy about.

Junior quarterback Lucas Johnson (below) was pleased with the literal play-calling, as he continues to transition to visually receiving signals versus verbal transmission from an incoming back. 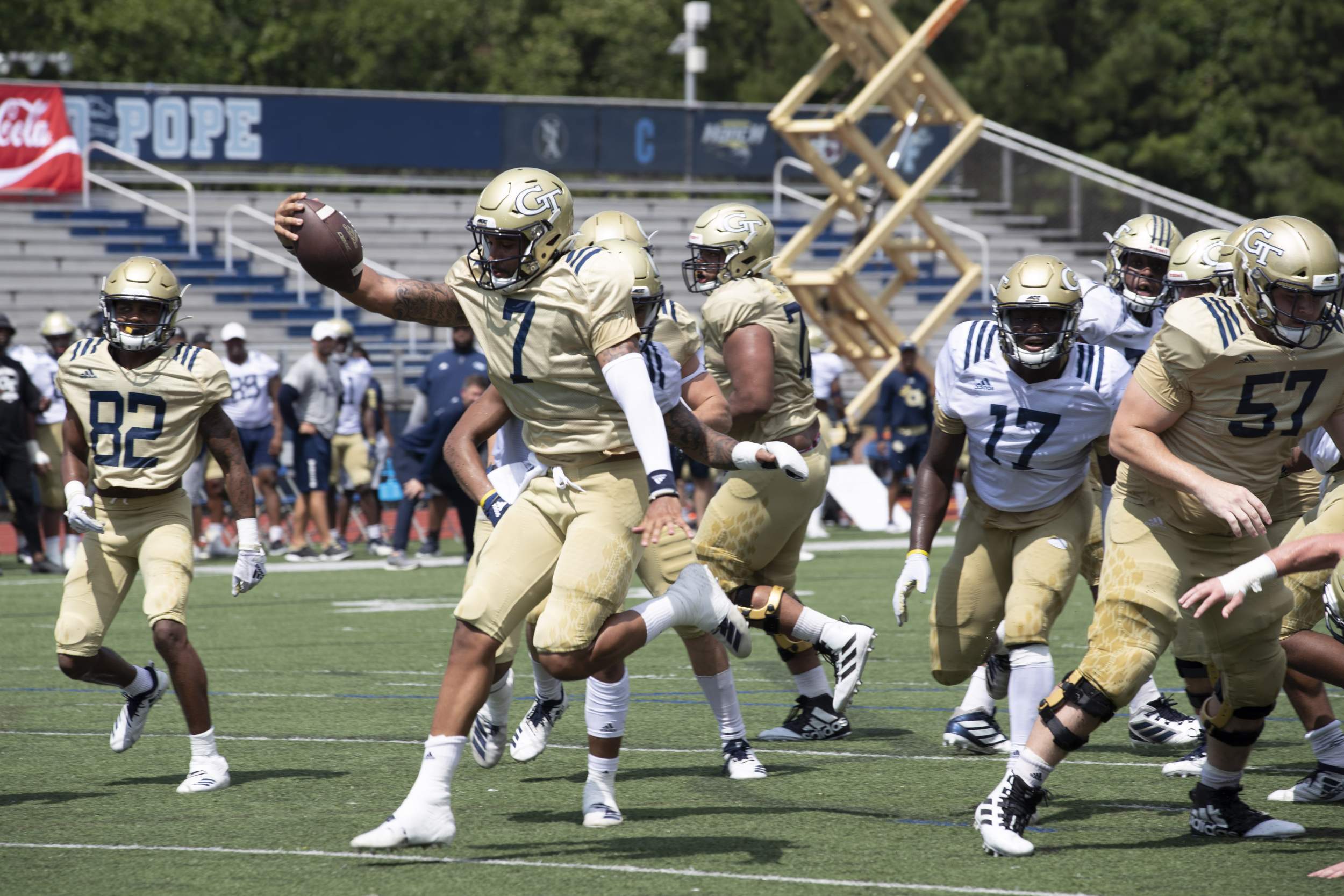 Johnson, who was one year to the day removed from suffering an injury that shelved him for all of 2018 — an anniversary of which he was reminded via a text message from his mom — is pleased to skip the middleman in the play-calling relay. However, he relished the idea of being the middleman in getting the ball to freshman wide receiver Ahmarean Brown.

“‘A.B.’ is electrifying,” Johnson said. “He has other-worldly speed. He’s so fast, we just have to get the ball in his hands and let him do what he does.”

Speed and competition play into the theme of the Thursday Races, a drill has become popular amongst the players. It holds two-fold value: giving the players yet another outlet for competition while giving the coaches an opportunity to find candidates for special teams, especially kickoff coverage.

“I think [kickoff coverage] needed to improve, so we’ve made huge emphasis on that,” said Collins. “It puts a spotlight on guys running down as fast as they can. We use the Catapult system and in real-time data, we’re calling out how fast the guys are running. They take pride in it and they’re training muscle memory — ‘This is how fast I’m going to run down on kickoff.’ Every day in our team meetings, I list ‘The 10 fastest guys in Atlanta.’ It’s real data. Jaytlin Askew has run 23.67 miles an hour this preseason. That’s pretty fast. Ahmarean Brown is right up there, Tariq Carpenter is right up there. So every day, as somebody breaks the top 10, we put that number up so the guys want to hit that number.”

Sophomore defensive back Juanyeh Thomas, who was already a big piece of special teams as a freshman all-America kick returner last season, has noticed the priority the units have gotten from Collins.

Another game-changer is turnovers and, similarly, it boasts a very popular board — The Turnover Board, which dates back to Collins’ days as defensive coordinator at Western Carolina in 2002 and has followed him everywhere he’s gone.

“We place a huge emphasis on turnovers,” said Collins. “We were one of the top turnover teams in the country last year at [Temple]. [The Turnover Board] is a cool deal. Now they’re putting down their Twitter names or social media names and they get more followers and they get turnovers. It’s a win-win for everybody.”

Collins has also found a win-win situation in position flexibility, something he insisted will continue.

“We’ve had to do it a little less than we did in the spring because guys have defined their roles,” he said. “Jahaziel Lee, consistently on a daily basis, is having to play both ways. There are some guys that are doing crossover package, goal line,  — Chris Martin, Ja’Quon Griffin, T.K. [Chimedza] — they are playing specialty roles for us. It’s really cool.”

Lee (below) thinks so too. 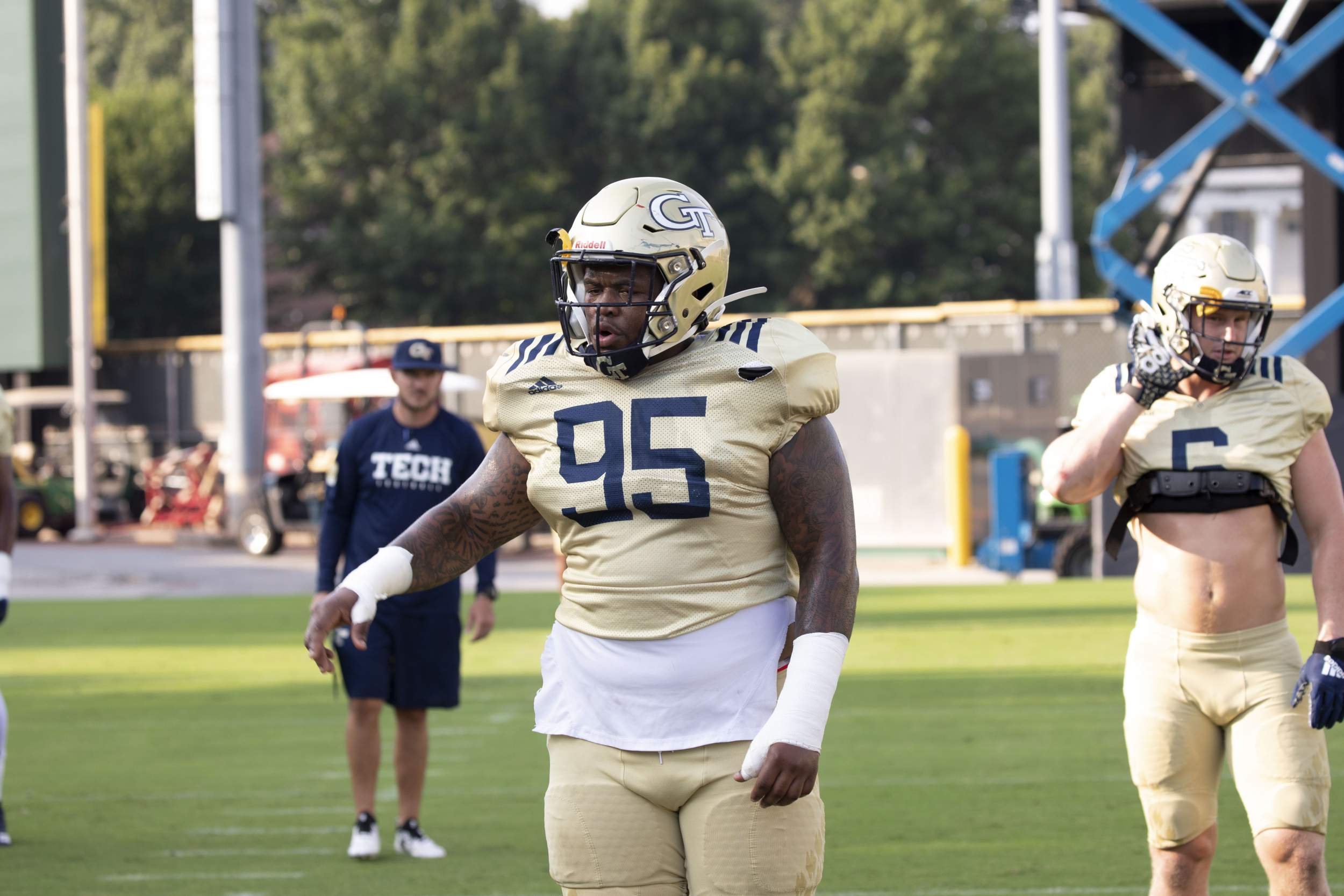 “I’m primarily defense but I’m adding value to the team by playing both sides. So whatever Coach wants, whatever he asks me to do, that’s what I’m doing,” said Lee, who’s made 17 starts as an offensive lineman in his first three years at Georgia Tech. “I figure adding value to the team because I’m versatile — not just myself but teammates — is better and will help us win ball games.

“It’s great for me for the next level,” he added. “Being out there playing defense and O-line, when scouts come and they see that, scouts like that. You add value to yourself doing that. I like it.”

Collins likes his team. He likes the players so much that he’s taking them on another road trip — continuing the #404Takeover.

“[Tuesday] night we’re going to the Braves game. That will be a good team-building event,” he said. “I’m really, really enjoying being around this football team. The way they just come out here and work and get closer and develop every single day. Everything about them is really, really, really positive right now and I’m just excited for these last two weeks before we kick it off.”

Thanks to the excitement surrounding new head coach Geoff Collins and the great value of 2019 season tickets (reserved seats for seven home games – including the regular-season finale vs. archrival Georgia – beginning at $219 and Stinger Mobile Passesstarting at just $149), Georgia Tech has already sold more season tickets than it did for all of 2018. For more information and to purchase season tickets online, visit ramblinwreck.com/footballtickets.