By Matt Winkeljohn  |  The Good Word

Nell Fortner is once again in the game of women’s college basketball rather than talking about it and moving with a graceful air that makes it easy to wonder: Does she know what she’s getting in to as Georgia Tech’s new head coach, after seven years of talking into a mic rather than blowing a whistle?

The game has changed on the floor since she stepped away from college jobs to take assignments to lead U.S. national teams that would win Olympic gold medals, first as an assistant in Atlanta in 1996 and then as the head coach in Sydney in 2000.

And the world shift may be even greater since she left Auburn in 2012 for a job as a broadcaster at ESPN. There’s been explosive growth in social media since then, not to mention the arrival of the NCAA’s transfer portal, which has made it almost blindingly common for college student-athletes to transfer from their schools.

Rosters seem to change by every storm cycle.

You can count even athletics director Todd Stansbury among the surprised. One of his first questions for Fortner back in early April was, “Why are you interested in this job?” As he said later to others, “I knew she had a pretty good gig.”

The 59-year-old coach has played for and worked with an amazing array of coaches and seen more women’s college basketball while at ESPN than she would have if she were coaching. In spending countless hours with multiple coaches and student-athletes, she’s remained plugged into the game’s goings on.

She wants to fill a similar role again.

“One of the biggest reasons I got back in is to be around the kids, help the kids both on the floor and off the floor. I want to make a difference,” Fortner explains. “With ESPN, studying teams, offenses, learning all what the coaches were dealing with off the floor because of social media was eye-opening.”

But she’s not scared by any of that. 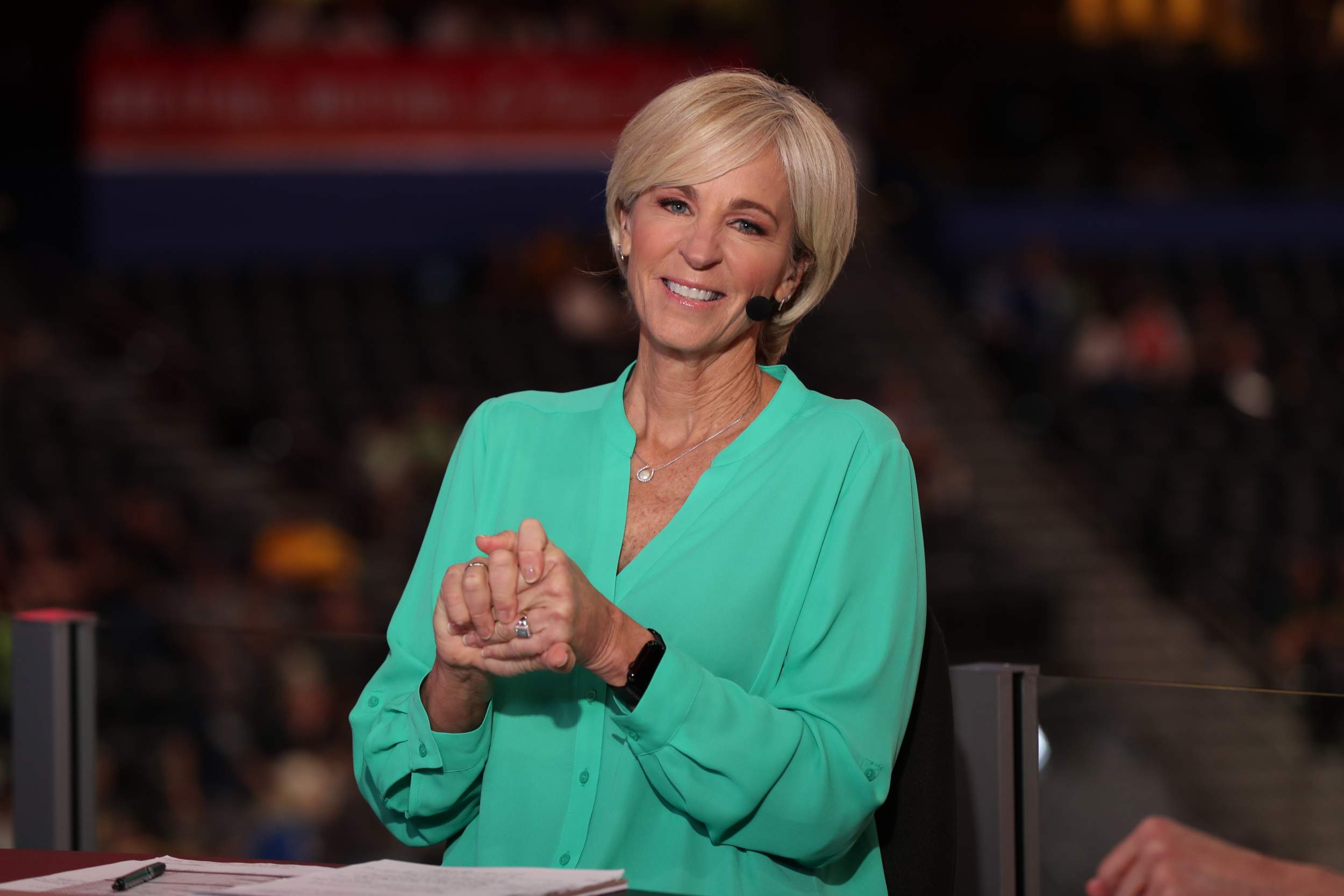 Fortner may be uniquely qualified to relate to the more mobile nature of today’s game and its players, because her track record suggests that she’s more than an active soul.

She grew up in Jackson, Miss., playing multiple sports, mostly in recreational settings, before moving at age 15 to New Braunfels, just about in the middle of Texas.

There, she picked up volleyball for the first time, quickly became top notch, and was instantly outstanding as a 6-foot-1 basketball player. For more fun, she high-jumped on the track and field team and was a cheerleader to boot. She tried, but could not fit tennis into her schedule.

The coaches at New Braunfels High made a difference. In basketball, there was Karen Fredenberg, who recently retired as a professor from Baylor, and in volleyball Fortner played for Karen Chisum, now in her 39th year as head coach at Texas State. She’s the longest-tenured volleyball coach in the NCAA.

“My high school coaches were absolutely phenomenal, strong women, excellent coaches, and I was so taken by how they motivated and taught,” Fortner says. “I knew I wanted to be like them, because before I always thought I wanted to be a veterinarian, because I love animals.

“From that point on I was going to be a coach. I knew I wanted to coach the Olympic team. I was wanting to coach at the highest level.”

“She was long and lanky, with big hands, very coordinated and she could jump,” Chisum told the San Antonio Express-News a few years ago before Fortner was inducted into the San Antonio Hall of Fame. “She was a handful, but I say that with a grin on my face, because she was so active.

“She liked to have a good time, very social, very likeable. She was spirited, a very positive person. I can’t remember Nell being in many bad moods.”

Nell wasn’t in a bad mood when she earned a scholarship to play volleyball and basketball at the University of Texas. 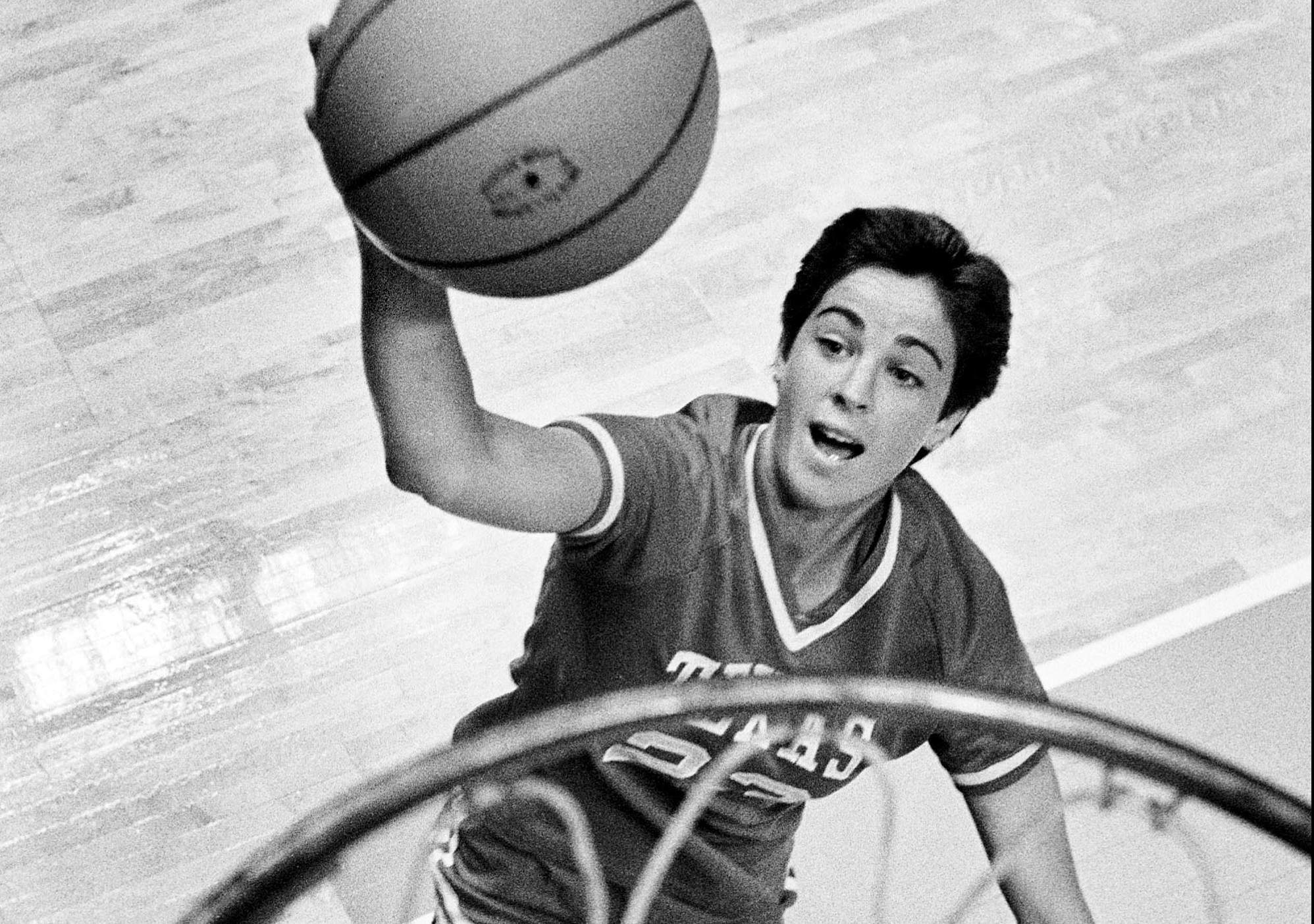 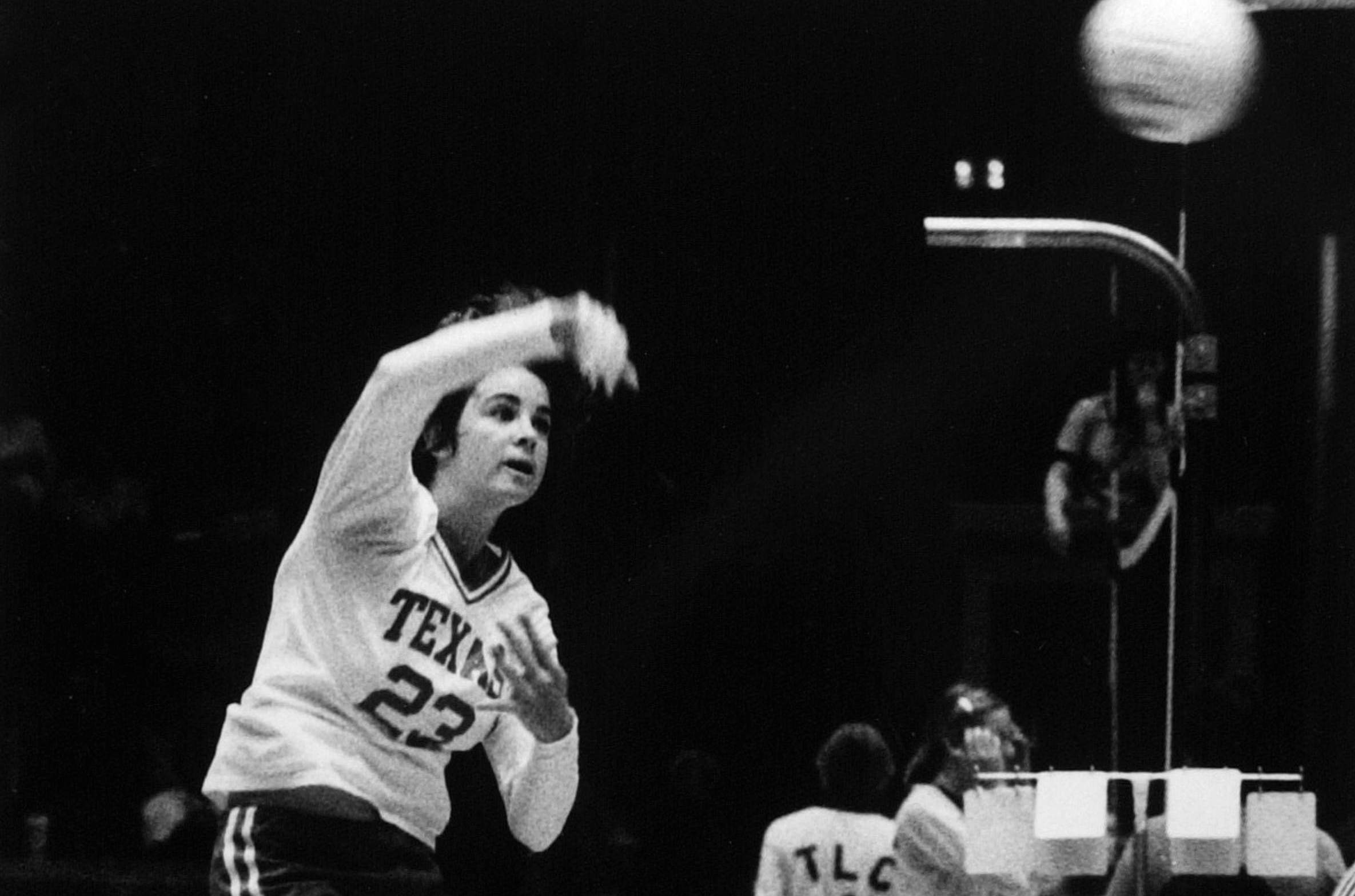 Fortner starred in basketball and volleyball at the University of Texas, and was inspired by her coaches in high school and college.

“It was very unusual at that time to find someone with the height, agility and overall skill she had,” Conradt told the San Antonio Express News. “She was always very friendly, bubbly and fun. She was a leader and a great team player.”

Not one to dawdle, Fortner became head girls basketball coach at Killeen High School shortly after graduating from Texas with a degree in physical education in late 1982.

“They had an opening, and I applied,” she said.

Her reputation as a star athlete in the state probably helped, and it took just three years to carry forward to the college level. Gary Blair, who’d been a successful high school coach in Texas while Fortner was playing at that level, was head coach at Stephen F. Austin, and he kept bumping into Fortner.

“When I got into high school coaching, I’d see him at state tournaments and he’d say, ‘When are you going to get into college coaching?’“ Fortner recalled. “The third year, he said, ‘Why don’t you come be my graduate assistant, and I’ll try to get you a spot.’”

Over five years as an assistant, Fortner took a graduate degree in education, and then got a call in 1990 from Louisiana Tech head coach Leon Barmore, another Naismith Hall of Famer.

He was ruling women’s college basketball at the time. In his first eight seasons at the helm in Ruston, La., he had a national championship, two runner-up finishes and three other Final Four appearances to his credit.

Blair was a previous assistant for Barmore, who said, “I was very much aware of who Nell Fortner was, and you don’t have to meet her but one time to know she’d be a good hire, we needed someone to help us get recruiting. I wanted someone with a personality that was bubbly, who’d go into a home with me and be impressive.

“I got her more for recruiting, but she turned out to be really good on the floor. Her X’s and O’s were so good.”

That’s saying something. On that same Louisiana Tech staff was Kim Mulkey, now head coach at Baylor and one of just three coaches to win three NCAA championships.

The time to move came again, though, when near the end of a 1990-95 spell at Louisiana Tech, Fortner got a phone call that would take her out of the college game.

Offered the chance to be an assistant coach for the U.S. national team under head coach Tara VanDerveer – who also is in the Naismith Hall of Fame with 1,067 career wins and counting, mostly at Stanford — and build toward the 1996 Olympics, Fortner jumped.

It was a nearly year-long commitment, a new approach, because USA Basketball was bruised from taking a bronze medal in the 1992 games. No more plucking players for a few practices weeks before the Games. That team traveled the globe over about 10 months and went 52-0 before beating the doors off everybody to take Olympic gold in Atlanta.

“Part of the reason they did that was they were testing the waters to see if there could be a professional league in the United States. It had the NBA’s backing partnered with USA Basketball,“ Fortner said. “We had a 20-game college tour to see what kind of crowds we would have.”

After the gold medal, Fortner became head coach at Purdue, and her team went 17-11, shared a Big Ten title and earned an NCAA bid.

She wasn’t a Boilermaker for long, as USA Basketball called again and offered a dream: the chance to become long-term head coach of the national team in 1997, replacing VanDerveer, who’d returned to Stanford. 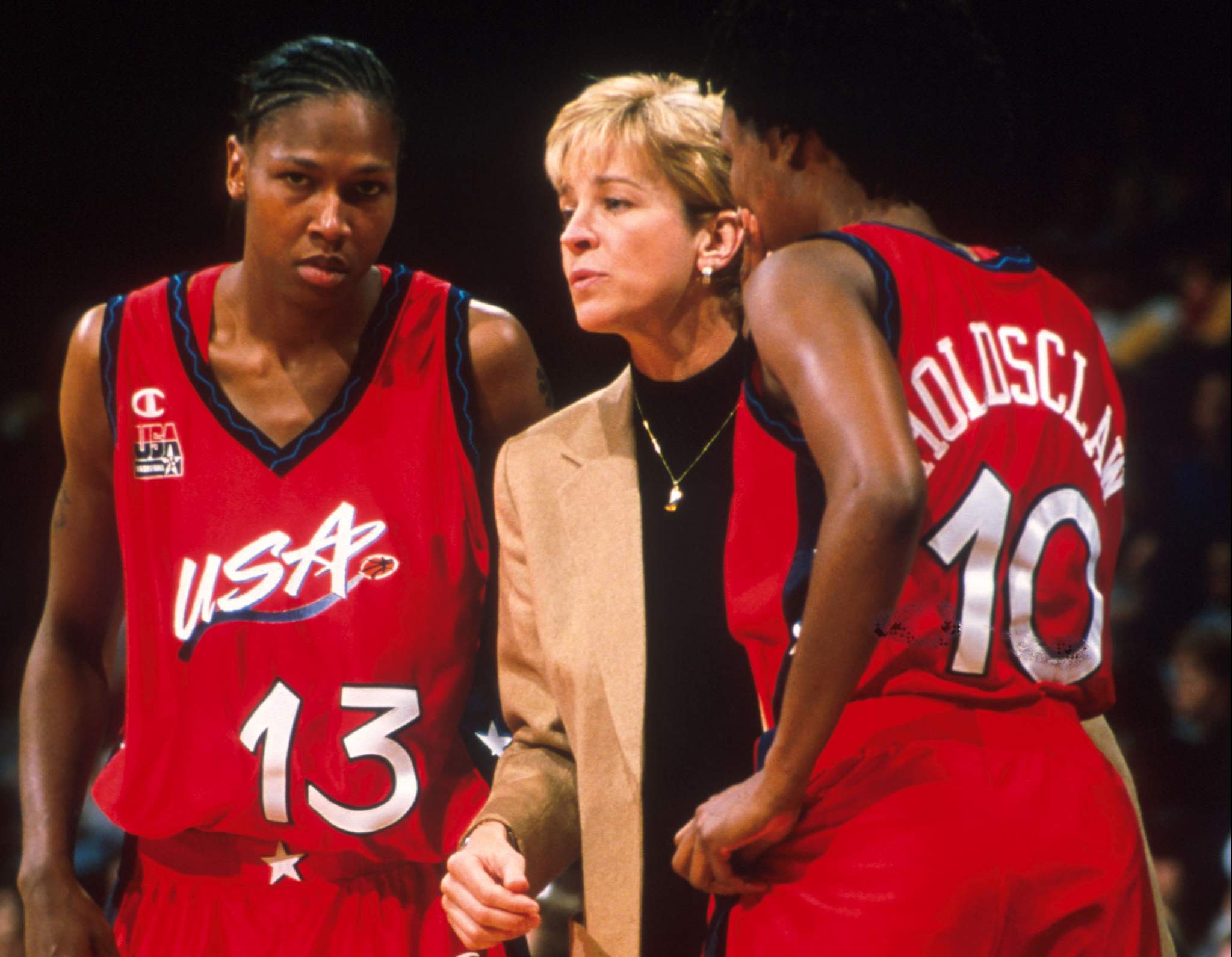 The United States rolled to a Gold Medal in the 2000 Sydney Olympics with Fortner at the helm.

“I was very familiar with all the international game and my goal was to be the Olympic team coach,” she recalled. “I could not say no to that.”

The U.S. rolled to gold in Sydney in 2000 with a roster similar to ‘96, and along the way she learned to manage up-tempo basketball staffed by big and athletic players with egos.

“Those athletes are so competitive that you’d better be ready every day to help them get better. They want to be pushed still, so it keeps you on your toes to be prepared,” Fortner said. “They want to compete running to the water fountain.”

Fortner spent three years running and coaching the WNBA’s Indiana Fever from 2000-2003 (she hired Anne Donovan as interim coach while she was tending to Olympic duties), before stepping away. She also worked for ESPN in the summer-based WNBA offseasons.

“After three years, it just wasn’t for me. I wasn’t enjoying it, so I stepped away and Auburn opened up. Several people said I ought to show interest,” she said.

Fortner got that job, and in her eight years on The Plains, the Tigers made two NCAA tournament appearances, peaking in 2008-09 with an SEC regular-season championship and a 30-4 record.

Andy Landers ran into her frequently in that time, while he was coaching at Georgia. They became co-workers at ESPN after Fortner resigned from Auburn in 2012 and Landers retired at Georgia in 2015 with 866 college wins.

He’s convinced now that Fortner is a rock-solid hire for Georgia Tech, and that having worked full-time for ESPN from 2012 until April will help her be a better college head coach than she was before.

“The thing that is obvious when you meet her is that she is a genuine people person. She’s good people,” Landers said. “I think she’ll just jump in and figure out where it is and go with it.

“We watch a lot of basketball. I’ve told some close friends that I’d be a lot better basketball coach if I had the privilege of watching people up close and all the tape that I’ve watched. And she has the experience of just stepping in and doing that.”

Fortner will likely keep her home on the Florida panhandle along Highway 30-A, which first was her get-away place when she was at Auburn, but she’s all in on Georgia Tech.

That’s become a major part of the game, as more than 700 student-athletes were recently in the NCAA transfer portal.

“It was too late [when Fortner was hired in the first week of April]. I had conversations with them, but that was already far, far down the road,” Fortner said of retaining Balogun and Dixon. “Would have loved to have had them, but it happens in a coaching change, and I wish them well.”

The Jackets have several key players coming back, including senior Francesca Pan and juniors Kierra Fletcher and Lorela Cubaj among starters. Veteran Chanin Scott will also return a senior. The Jackets cranked up limited summer practices in mid-May, although sophomore guard Lotta-Maj Lahtinen will miss the summer while playing with Finland’s national team, and Cubaj will miss part of the summer to be with Italy’s national team.

The new coach is not sure yet what Tech’s playing style will be, but she’s already optimistic.

“I don’t think I’ve seen enough yet to know, but I’ve sure liked what I’ve seen so far,” Fortner said. “The cupboard is not bare. I think we’ve got some talent here, and we’ve got some players who want to prove themselves who didn’t get the minutes that they wanted last year.”

Fortner said she will resist the temptation to jump into the transfer portal, even as the Jackets stand at 13 scholarship players against the NCAA’s allowable 15.

She’s more locked in on the here and now. Recruiting never stops.

“It’s a different age where this profession is now, but you [still] treat kids honestly, and fairly and present the ability for them to see opportunity to grow and get more playing time,” Fortner said. 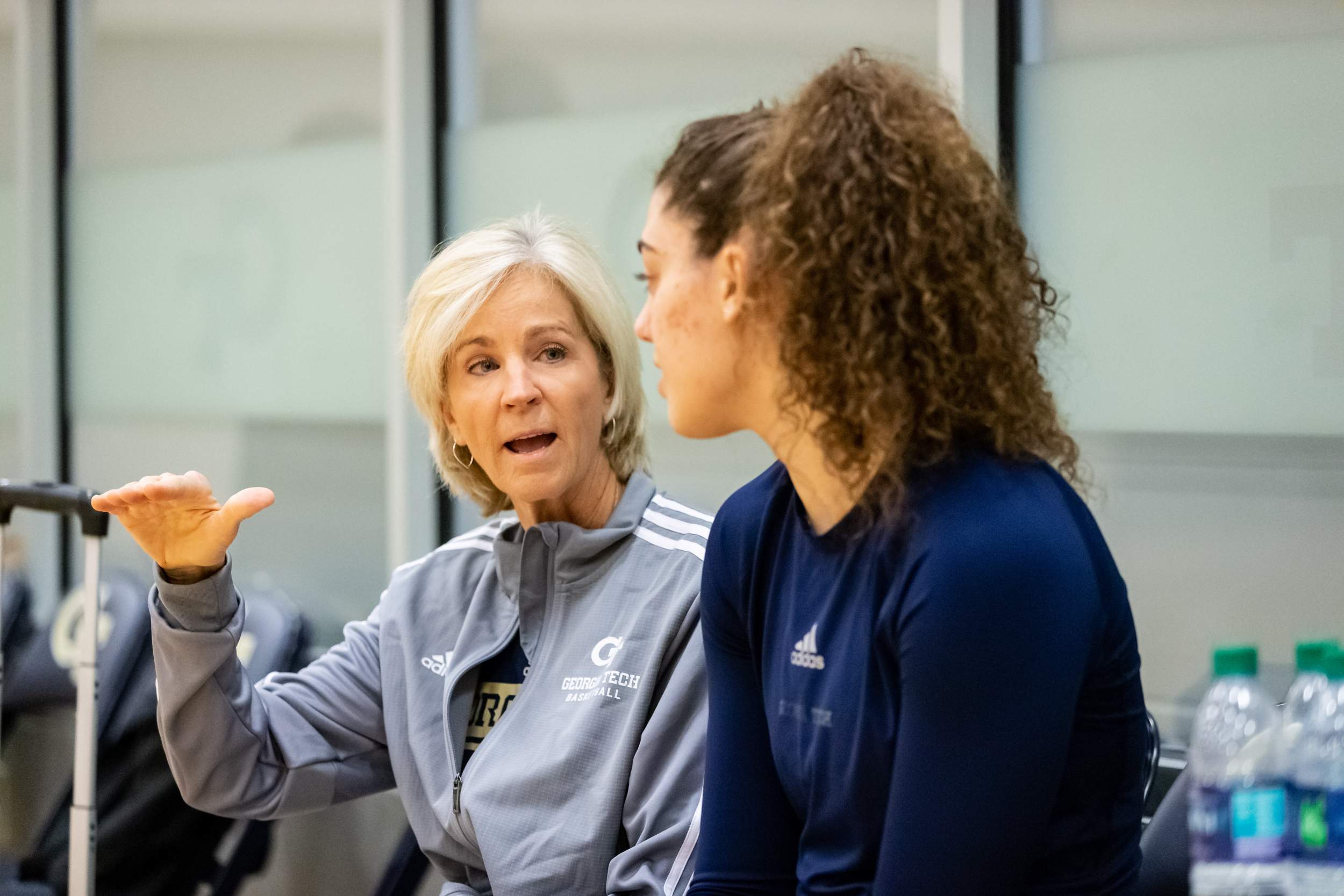