Geoff Collins wasted no time jumping into character on Friday, when he was announced as the next football coach at Georgia Tech and let everyone know that “we’re outside the box” and that he and his staff will recruit smart players and offer NFL training.

Except that Collins, 47, doesn’t jump into character. His motor almost always runs hot, and so when his impossibly delayed introductory press conference began in the Edge/Rice Center with him planted in a chair next to athletics director Todd Stansbury, his first official words as head of the Yellow Jackets were, “You guys will get to know me; I’m not really good sitting down. I’m kind of an energy guy . . . ”

The timing for Collins’ first jolt of energy on The Flats may be perfect. This is a big recruiting weekend, with many prospects on campus ahead of the first national signing period, which begins the Wednesday after next.

And wow, is this man big on recruiting!

He connected with all of the lads Saturday after a “6:30 a.m. meeting with our recruiting staff,” and he started into his new job even as Paul Johnson will remain Tech’s official head coach through a Dec. 26 meeting with Minnesota in Detroit’s Quick Lane Bowl.

Before that, he clearly connected with Stansbury, who admitted to being astounded in interviews by the way Tech’s new coach used so many of his own buzzwords – brand and culture chief among them. Collins also mirrored the AD’s philosophy on the value of a Tech degree and the way it should be used as a recruiting tool to chase high-end talent.

The man does research.

“I’ve already been watching tape. I was watching tape on the plane . . . Recruiting matters, and that is a huge priority for us . . . ” Collins said. “I don’t want the guys that come here to think that their football careers are going to end when they walk out of this great place. They will have their degree . . .

“It will be a valuable, meaningful degree; they will make a difference in this world by being a Georgia Tech student-athlete. But a lot of them are going to want to go play in the NFL, and I want to make sure I afford them every opportunity in how we practice, the schemes that we run . . . so they can live out their dreams and develop in every single phase of their life.”

From the day he was hired two autumns ago, the athletics director has sought to offer the long view in attracting student-athletes in all sports.

The goal, he has said all along, should be to acknowledge rather than downplay the reality that the academic rigors of the school are unique, and ardently highlight the supreme value of a degree from Georgia Tech as a launching pad for a prosperous life.

There are myriad statistics, surveys and reports that demonstrate the downstream value of a degree from Georgia Tech. Collins knows them.

Having worked at Tech twice before, as a graduate assistant and tight ends coach in 1999-2001 under George O’Leary, and then as the director of player personnel (recruiting honcho) under Chan Gailey in 2006-’07, Collins connects with the mission of the Institute. He developed his first ideas growing up in Decatur and Conyers.

Stansbury also went looking for a coach who will seek to present Tech as a landing spot for smart and motivated high school football players, those seeking a shot to play their sport at the next level. He’s a dreamer and a realist at the same time.

“Player development . . . We know here at Georgia Tech that in a lot of cases we’re not going to get a ready-made five-star [recruit],” Stansbury said. “We’ve got to create five-stars.

“Now, recruiting-wise we’re going to go after those five-stars, but we need to also make those young men who may not have five stars . . . by the time they leave here they’re pro ready and they can compete at the highest level.” 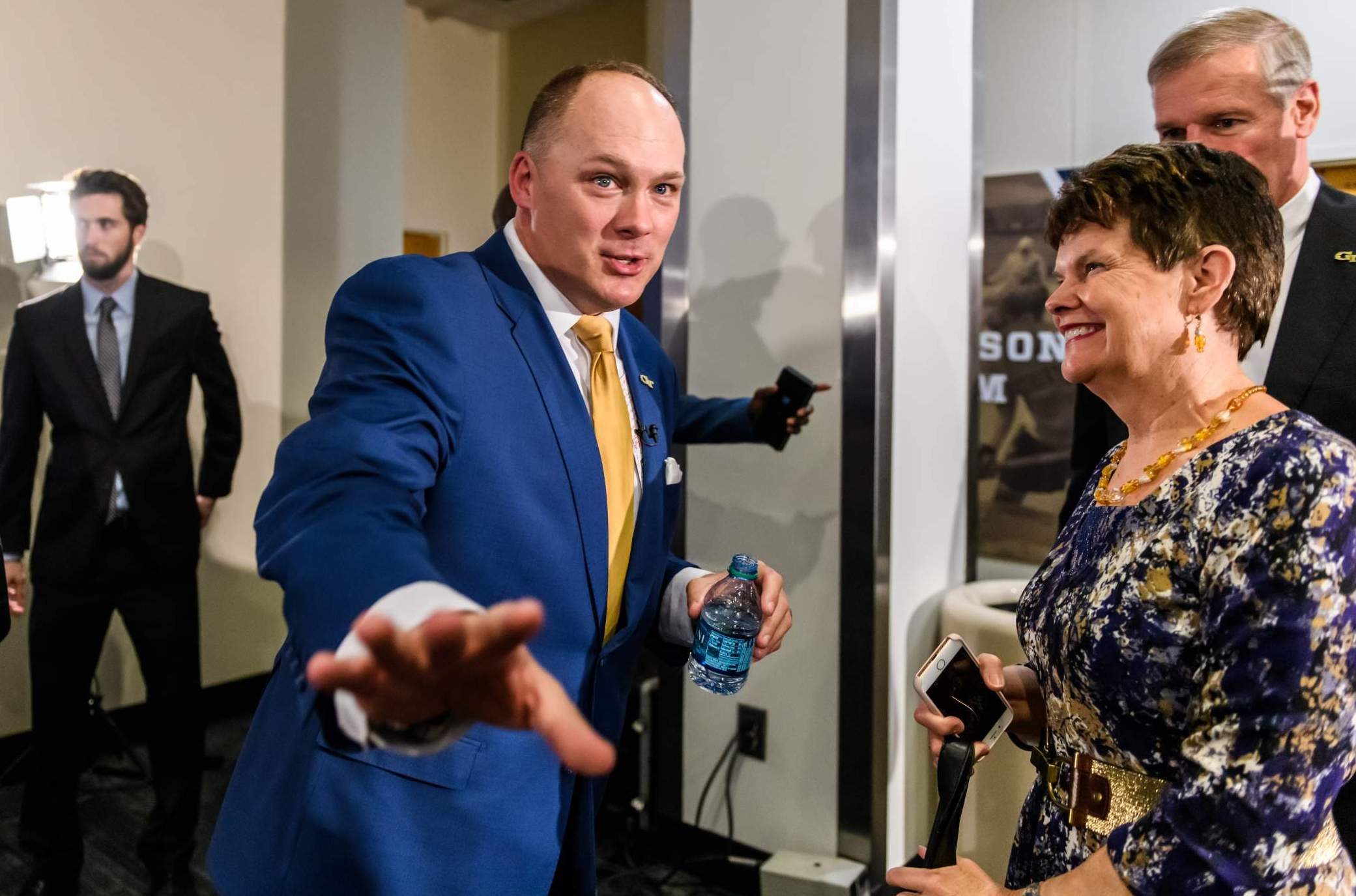 He said the Jackets will run NFL-style defense and offense. Details remain to be announced and styles will be crafted around roster evaluations and incoming recruits, which the new head coach suggested may include more graduate transfers like current safety Malik Rivera and deep snapper Zach Roberts.

Tech’s next head coach has worked in the middle of college football’s fray, and he seeks to return the Jackets to that spot.

In his first stint on The Flats, under O’Leary, Tech was frequently ranked highly, so between that, his layover at Alabama and time at Mississippi State and Florida he’s been near the mountain’s top. In the first game of his second stint, the Jackets opened the 2006 season by playing host to No. 2/3 Notre Dame with ESPN’s Gameday on campus.

Collins, who referenced all of the above, ran point on recruiting for the next several months, working in conjunction with the staff and especially former defensive line coach/recruiting coordinator Giff Smith to secure Tech’s hardiest class of prospects in a quarter century.

That recruiting class prompted Alabama head coach Nick Saban to offer Collins a job in 2007, and he spent a year running the Tide’s recruiting show before jumping back fully into coaching as a defensive coordinator at Central Florida, Florida International, MSU and Florida. He was hired in ’17 as the head coach at Temple, and the Owls earned bowl berths each of the two seasons under Collins’ tutelage.

The former Western Carolina University linebacker (he shares an alma mater with Johnson) is noted for his energy on the recruiting trail and beyond, for making videos about eating at Waffle House, for sending off-beat text messages to prospects, encouraging band members to get involved and just general difference.

He said he and his wife, Jennifer, are ecstatic to be back in Atlanta with their two-year-old daughter, Astrid. Geoff’s mother, Barbara, is quite pleased as well.

And Collins isn’t sweating Georgia Tech’s unique academic requirements in the race to attract talented students who are also athletes.

In his second year as a graduate assistant under O’Leary, he convinced George to let him recruit, which was uncommon for GAs. The boss wasn’t fond of that idea, a year earlier, “He would just shush me away . . . go back in your hole and break down some film.”

The young man was given the 44 states that the head coach decided not to focus on with his assistants. Collins wooed five prospects that year.

So he has played that game, and now he said his phone is “blowing up” with coaches interested in joining his staff, prospects intrigued by the possibility of playing for the Jackets, and even tight ends who want to play at Tech. Utilizing Johnson’s patented spread-option offense, the Yellow Jackets haven’t deployed a tight end since 2008.

“I don’t see challenges. I see this education and . . . the amazing opportunities to be a success in life because if you go to the NFL, the shelf life of a career is 3.5 years . . . what are you going to do for the next 40?” he said, invoking a Stansbury theorem.

“You’re going to get elite players. We did it in 2007, [and two] years later, won the ACC championship [under Johnson].”

Collins wasn’t around for that. He was at Central Florida by that time, as recruiting coordinator, surely creating images in the minds of prospects.

He did that again on Friday night upon his tardy re-introduction at Georgia Tech.

His flight from Philadelphia was delayed first by weather, then by getting stuck in line behind a plane he said “that Snoopy might fly” with a flat tire. Finally in the air, headwinds further delayed his arrival in Atlanta. Then, he insisted on meeting current Tech players before joining media.

Nobody can know the last time a doghouse like Snoopy’s really flew, but the visual of a mutt with a flat tire was a winner in the Edge/Rice Center, even if it took folks a while to piece it together.

And as he wrapped up his greeting and tucked into his jacket pocket the notes he’d written with a pen given him by Temple University, Collins said aloud, “This is the last time I’ll ever write anything in red.”

Geoff Collins, Georgian, is ready to get after it on The Flats. He feels no headwinds, and plans to not to pretend about any that may exist; rather, he’ll focus on opportunities available.

“A lot of programs that we’re going to recruit against don’t have the advantage of having a meaningful degree. To come to place where education matters, where innovation and creativity matters . . . ” he said.

“You can’t be fake because that’s the first way they’ll walk out of the door and say ‘I don’t want to be a part of this.’”