No one has to tell Lorela Cubaj about respecting her elders, especially when it comes to basketball.

The native of Terni, Italy, learned the game as an eight-year-old from one of her two uncles that played professionally in her home country.

That willingness to continue to learn and heed the advice of more experienced players was never more evident than this past summer, when the Cubaj made her debut for the Italian Senior National Team at EuroBasket 2019.

“It was a really different experience since I was playing with people that were like 10 years older than me,” said the 6-4 Cubaj, who at 20, was the youngest player on the squad and one of two 20-year-olds on the roster (the other, center Olbis Futo Andre, is two weeks older) on a team in which the average age was 26. “I’m glad I had the experience. I had to experience them because there were pros who have been doing this their whole life. Playing with them is just a different kind of play — more mature, more intense — just because they are older and better at what the game of basketball is. But it was really, really a pleasure for me just to participate and play with them.”

The pleasure actually was mutual, as Cubaj chipped in plenty. She came off the bench and went straight to the boards. She pulled in 11.0 per game (good for 10th in the tournament) and 2.5 on the offensive glass (seventh).

“That’s something that I really wanted to do for the team, since our team wasn’t that big,” said Cubaj, the team’s tallest player (listed as 1 cm taller than Andre). “I wanted to do well on the boards and make hustle plays, just to make sure that the team could win or had the possibility to win. That’s something that I focused on, defense and rebounds, especially because it was my first competition so I didn’t really have a major role. So that’s what I was focusing on more.” 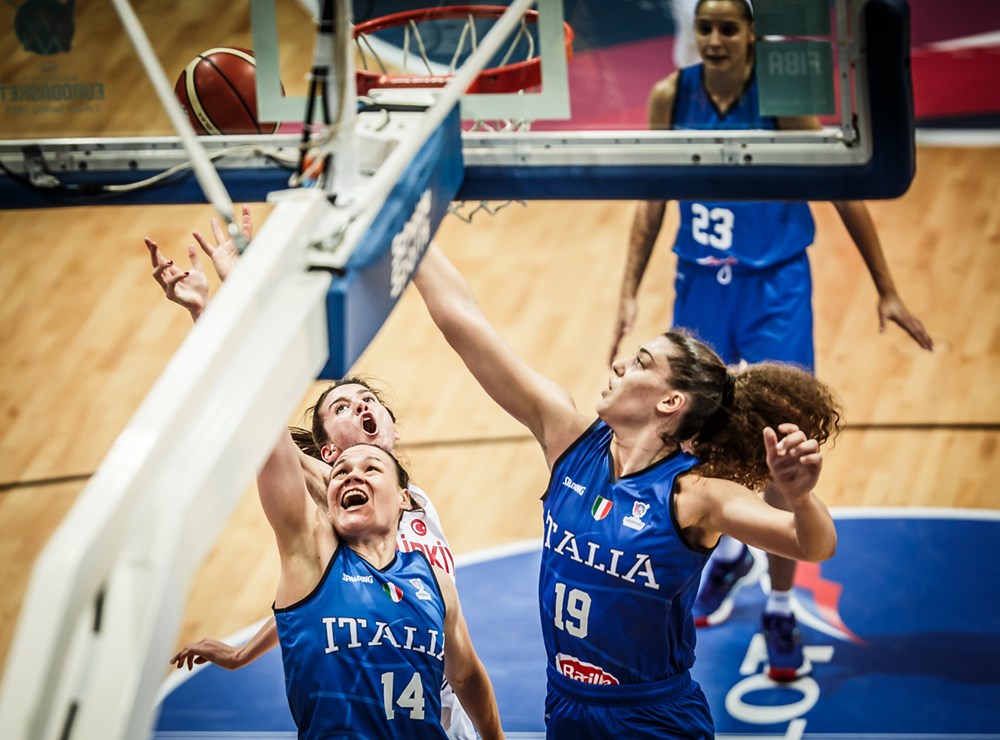 That focus paid off in Group C play.

Cubaj pulled in game-highs in rebounds and offensive rebounds in the opening 57-54 win over Turkey, then had a game-high four offensive boards and team-high 10 total in the second game, a 59-51 loss to Hungary. In the Group Play finale she played only 6:52 in the 75-57 laugher over Slovenia, registering an assist. In the Qualifier she pulled in three offensive rebounds, blocked three shots and made two steals (tied for the team lead), in a losing effort, as Russia eliminated Italy, 63-54. For the tournament, she pulled in 20 rebounds, 5.0 rebounds per game (11.0 per 40 minutes), splitting her effectiveness equally, pulling in 10 (2.5 per game) on each end of the floor. She also had three blocks and made three steals.

Impressively, she compiled her numbers in only 18.3 minutes per game, seventh on the squad.

Even more impressive was that she compiled those numbers against some pretty good competition. In order, Cubaj played against Turkey’s 26-year-old Kiah Stokes, a star at UConn, then a first-round pick of the WNBA’s New York Liberty, where she played for two years and was All-Rookie and second team All-Defense, Hungary’s Bernadett Hatar, 25, a four-year veteran of Euroleague Women, then Shante Evans, 28, who played four years at Hofstra and was in 2018 Euroleague Women, and finally Natalia Vieru, 30, Russia’s tallest pro (6-7), an Olympian (2012) and a professional since 2005.

Thinking about that plus playing in your first senior tournament could have made for an intimidating and impossible task. Not thinking about it did make for a possible and productive tournament.

“It came to my mind, obviously, but I had to put those aside because we had the really short time to prepare for the competition and, obviously, if you want to be part of the competition you have to give your all,” she said. “That’s basically what I was trying to do — just put those thoughts aside and think, ‘I’m the same as them. I have the same opportunity and I just have to take it.’” 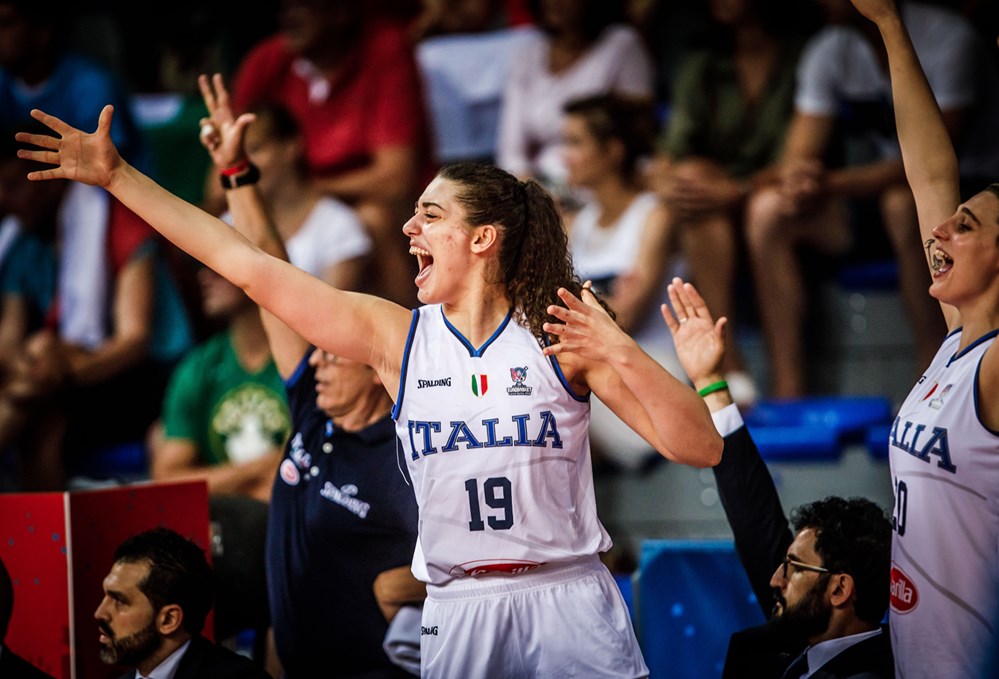 “Probably how fast the game is and the difference between the games because here, obviously, I think it’s a little bit more physical, but it’s not as fast, so you have to think way faster,” she said.
“That’s probably the hardest thing that I had to adapt to. It took me like two or three weeks to adapt to that but it was good.”

She credited her older teammates for her quick transition and the resulting good feelings.

“Cecilia Zandalasini — she plays with the WNBA for the Minnesota Lynx, too — her vision of the game and also the way she thinks about the game is completely, like, mind-blowing!” Cubaj said. “She makes everything look so easy. I really like that about her. Also Giorgia Sottana, she was the captain of the team, she’s a veteran. She always made sure that I had the right advice and always helped me if I was confused about things. I really appreciated that about her. I want to be like her for the team this year.”

Cubaj knows that the Jackets will rely on her to do just that this season, as she’s a junior who has been around the program for two years. She’s ready to step up.

“Having more leadership on the court and just like helping teammates, especially younger teammates, just explaining to them what is my vision of the game of basketball and just exchange opinions, which I think is very constructive,” she said. “Now I know about conference play, so I have to lead other people and I have to tell people what it is like to play in the ACC. They have to get an example from me, which is weird, because I was in their shoes last year and two years ago. It’s just a different task that I have to do.”

She’s better prepared to be that solid example being equipped what she learned from the veterans on the Senior National Team.

“They take care of their bodies really, really well,” she said. “That’s something that when you’re young you don’t really value because you think that your body is great. I think in the long run this is something that is going to help me. Then, also, just listen to my teammates because, obviously, there are other points of view and you have to consider them all. Just more of that and then just helping each other out.”

Cubaj also has been intent on listening to head coach Nell Fortner and her staff, something she’s enjoying.

“They’re really amazing. I really like the way they coach,” she said. “They’re really calm when they’re talking to you and they know the game of basketball. I just try to take advice every day on what is their vision of basketball and just make it mine.”

She expects that vision to include her getting more involved on the offense — she took 220 shots (7.3 per game) last year, making 90 (.409), and, over the summer, took only six in the four games for Italy (making three of them).

“Yes. I definitely will have chances to take more shots because my role on the team is completely different from the role that I had on the National Team,” she said. “It requires me to step up for the team.”

Of course, she’ll remain laser-focused on the defensive end, where she dominated in the paint yet also played at the top.

“I want to be as versatile as possible and it starts with defense,” she said. “I like to guard multiple positions. I really like that. I take it as a challenge.”

The ultimate challenge and the ultimate goal, however, has not changed.

“I want to improve every aspect of my game,” she said. “Every year I’m trying to help the team win and have more wins than the year before. It’s something that I want to really focus on and I really think that I can do it.”