THE FLATS – Behind the play of Kierra Fletcher and Elizabeth Balogun, Georgia Tech women’s basketball knocked off No. 12 Syracuse Sunday afternoon, 65-55, to hand the Orange their first ACC loss of the season. Fletcher exploded with 22 points and scored a crucial 10 points in the fourth quarter as Tech recorded its highest win over a ranked opponent since 2014. Francesca Pan finished with her first collegiate double-double as Tech improved to 13-6 overall and 3-3 in ACC play.

“First of all, I want to compliment the play of Kierra Fletcher,” stated head coach MaChelle Joseph. “When she scores, when she’s aggressive and she’s tough – we are a hard team to beat. I’ve said the same thing about Lorela Cubaj. Even though Lorela didn’t score much tonight, you saw how valuable she is helping us break that press. Coming in today, we simplified everything and we let them play basketball. And I thought you saw a tremendous effort from a lot of young players. I was really proud of Francesca Pan to get a double-double.” 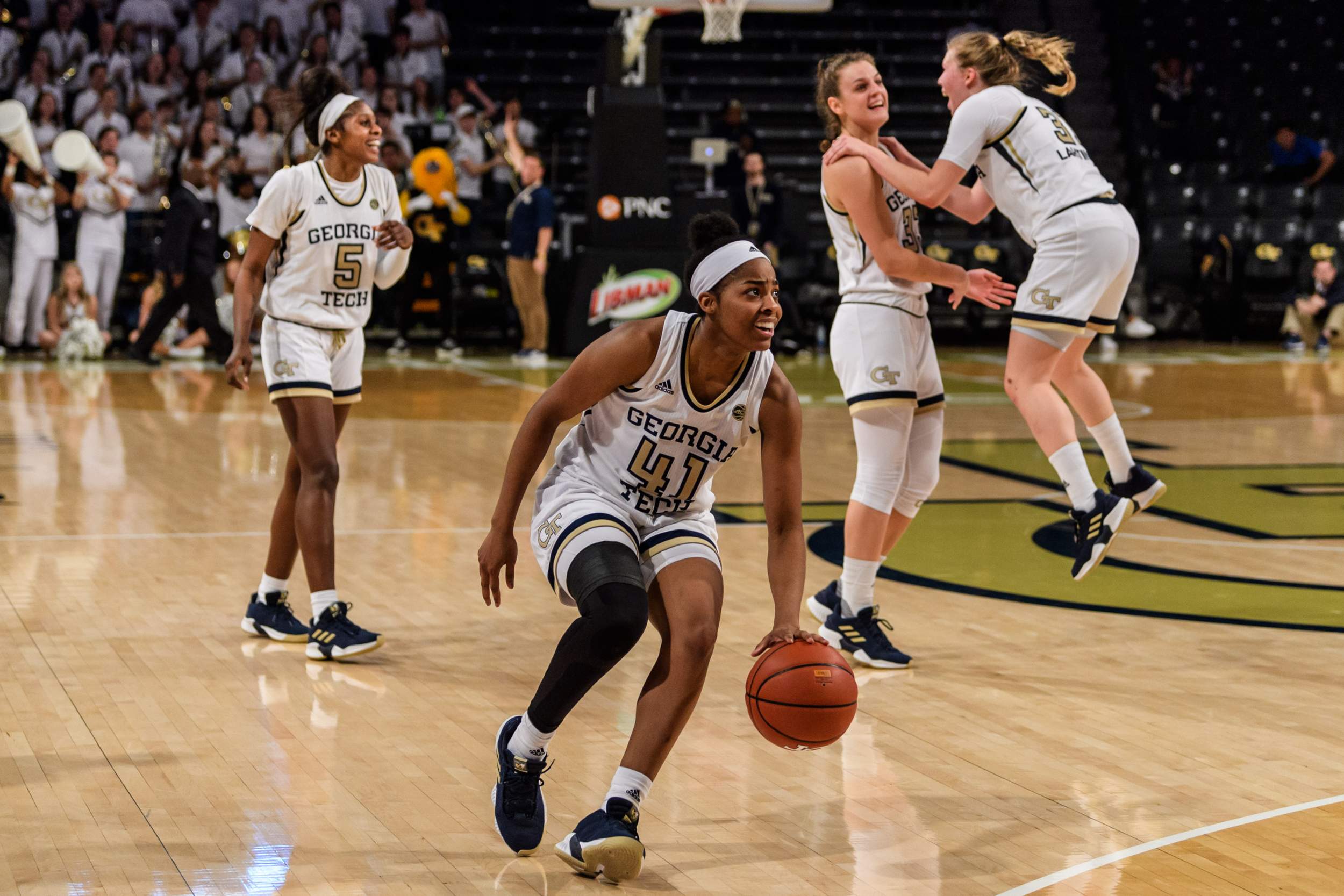 How It Happened
It all came down to the second half after Tech trailed by 10 points at halftime. After a three-pointer from Balogun to open the third quarter, Syracuse hit consecutive treys to force a Georgia Tech timeout at 7:31. With Syracuse leading by eight at the third quarter media break, the Orange hit their final field goal of the frame on a three-pointer from Miranda Drummond at the 3:53 mark for a 46-35 tally. Pan ignited Tech’s offense that closed the stanza on a 11-2 spurt to setup a one possession ballgame, 48-46, entering the final quarter.

The teams traded baskets to open the final 10 minutes before Syracuse took a timeout. At the 4:25 mark, Pan drained a triple in front of Tech’s bench to tie the score at 52-52 and Tech regained the lead on a Lorela Cubaj free throw with 3:09 to play. Fletcher then scored 10 of Tech’s final 12 points in the game, including going a perfect 6-for-6 from the free throw line, to seal the comeback win.

Georgia Tech kept a close number on Syracuse to start the game and led by seven points, 12-5, in the early going. But the Orange answered with a 20-2 run spanning the quarter break to gain a 25-14 lead with 5:45 to play in the second stanza. Fletcher sparked Tech’s offense with back-to-back jumpers and Balogun followed draining a three-pointer to slice the score to 26-21 with 3:22 on the clock. A 9-4 run from the Orange closed the half with Syracuse leading 35-25 at intermission. 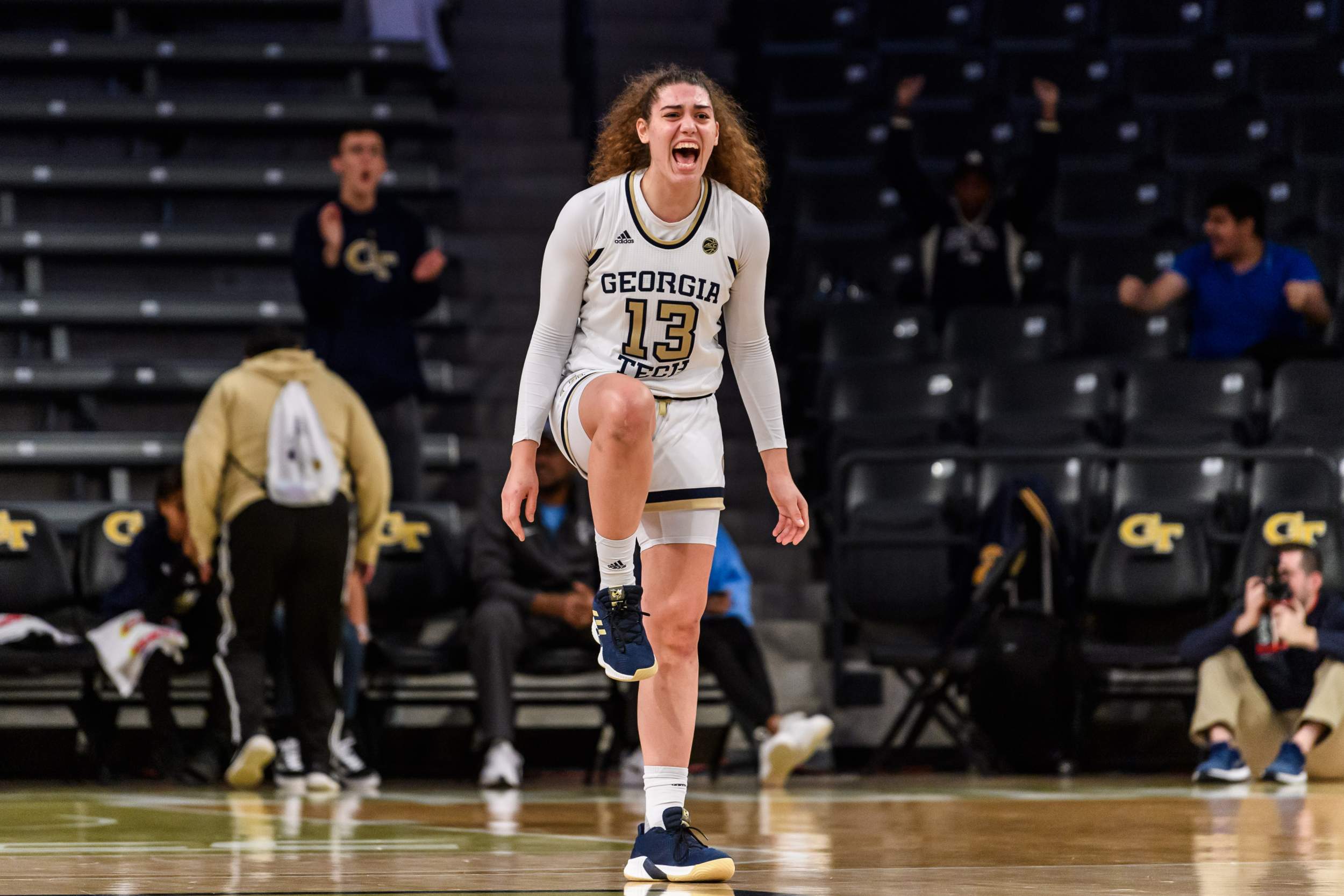 * The last time Tech defeated a top 15 opponent dates back to Feb. 6, 2014 when the Jackets beat No. 13/11 North Carolina, 94-91
* Tech has defeated Syracuse the last two meetings in McCamish Pavilion when the Orange were nationally ranked – Syracuse was No. 24 in the 2017 meeting
* This marks Tech’s second win over a top 15 opponent this season as Tech also defeated No. 14 Georgia earlier this season
* Tech outscored Syracuse 40-20 in the second half to seal the comeback win
* Fletcher posted a game-high 22 points, followed by 20 points from Balogun and 11 from Pan
* The Jackets narrowly won the battle on the glass, 46-43, led by a career-high 10 rebounds from Pan
* After posting a 3-for-3 effort at the charity stripe in the first half, Tech was 12-for-16 in the second half, while Syracuse was 2-for-5 in the final 20 minutes (Orange were 13-for-16 in the first half)
* Syracuse’s leading scorer, Tiana Mangakahia, was limited to five points in the outing as the Orange shot just 23.9 percent (16-67) from the field
* Tech limited Syracuse in the paint, outscoring the Orange, 28-12

Next Up
Georgia Tech stays at home and welcomes No. 8 NC State on Sunday, Jan. 20 to McCamish Pavilion. Tip on Sunday is slated for 2 p.m. 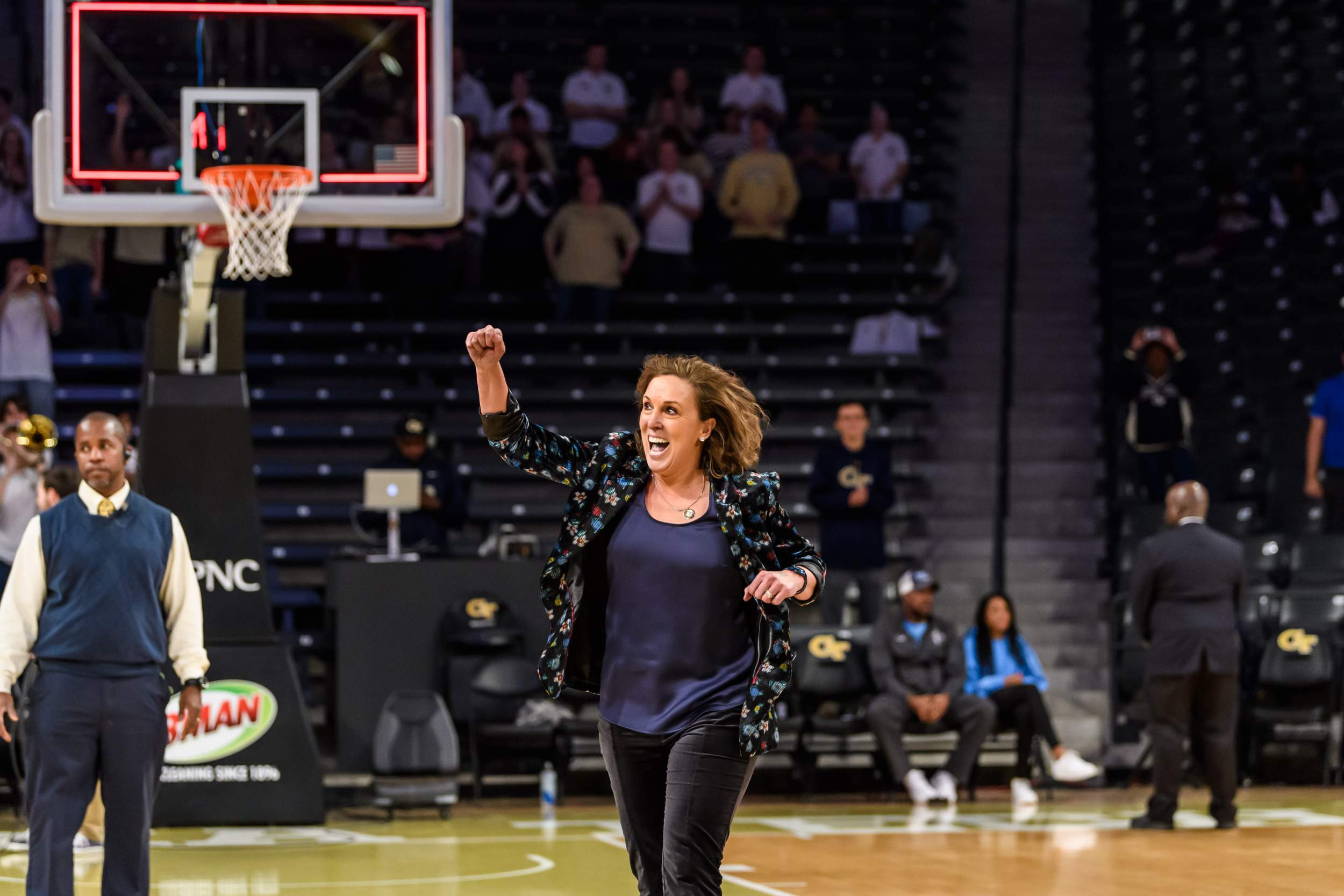