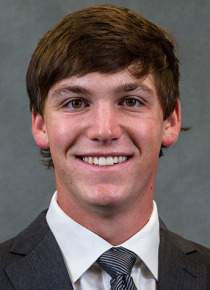 Career Notes: Top-ranked player in the state of Georgia in the class of 2014 according to the Junior Golf Scoreboard, and a consensus top 50 player nationally … At end of spring 2014, ranked No. 43 among all classes, and 20th in the class of 2014, by the Junior Golf Scoreboard … Has played in 12 events in his Tech career with a high finish of 31st.

Played in two events, both in the fall, with a high finish of T-37 at the Golf Club of Georgia Collegiate.

2017 Summer Highlights: Tied for second (67) and advanced out of a U.S. Open local qualifier at Stone Mountain, Ga.

Got into two events, both as a counting member of the team at the Golf Club of Georgia Collegiate (T33) and the Amer Ari Invitational (T104) … Had a 74.33 stroke average in six rounds.

Played in five events, including four starts for the team … Compiled a 76.71 stroke average over 14 rounds … Finished T-31 at the United States Collegiate Championship and tallied a 219 (+3), his best finish this year … In two spring events, has a T-59 at the Valspar Collegiate and a T-55 at the Clemson Invitational.

Two spring starts produced a T22 at the Puerto Rico Classic (+2) and a T63 at the Valspar Collegiate … Competed as an individual in the U.S. Collegiate Championship and tallied a 238 total over three rounds.

2014 Summer Highlights: T29 at the U.S. Amateur qualifier at the Piedmont Driving Club in Atlanta … T49 at the Southeastern Amateur in Columbus, Ga.

Junior Golf: Earned six top-10 finishes in junior events over the three years prior to his enrollment at Tech, including a victory at the 2011 AJGA Huntsville Junior … Has four other top-20 finishes … Also was recognized for doing charity work, raising money for the Children’s Tumor Foundation, when he received the Paul S. Simon Character Award at the 2013 Junior Invitational at Sage Valley Golf Club, one of the nation’s premier amateur events.

Personal: Full name is Michael Vincent Pisciotta … Born February 19, 1996 in Atlanta … Son of Tori and Peg Pisciotta … Has two sisters, Caitlin, who plays college golf at SMU, and Carolyn, who is studying mechanical engineering at Georgia Tech … Began playing golf at age 6 and took up the game seriously around age 10 … Graduated in May, 2018, with a bachelor’s degree in business administration.