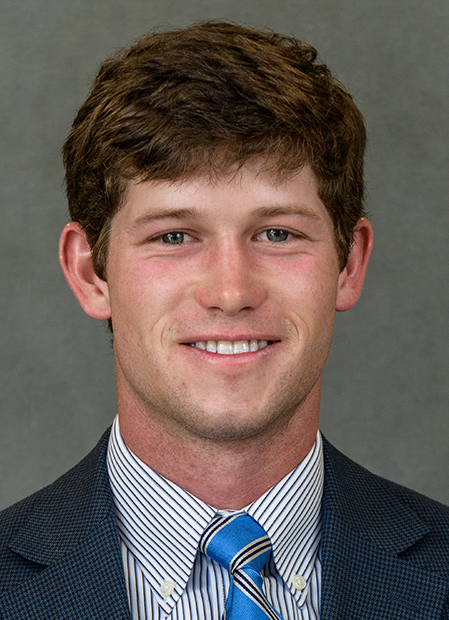 General: Was in the Tech lineup for all but six events in his career (redshirted in 2017-18) … Small of stature but worked hard to develop himself physically and gained 30-40 yards off the tee in his time on campus … Made the ACC Academic Honor Roll all five years at Tech … Born in Columbus, Ga. … His father and uncle also attended Tech in the 1980s … Active volunteer for Habitat for Humanity … Enjoys fishing, hunting, dirt-bike riding and spending time on the lake … Began playing golf at age 8, and has had two holes-in-one … Studied in business administration and earned his bachelor’s degree in May, 2019.

Competed in seven of Tech’s nine regular-season events, and did not make the starting five for the post-season … Averaged 72.28 strokes over 18 rounds and posted a .547 winning percentage head-to-head … Had two top-20 finishes in the fall, a tie for 14th at the Carpet Capital Collegiate and a tie for 17th at the Golf Club of Georgia Collegiate Invitational … Won both his matches at the Jack Nicklaus Invitational … Top spring finish was a tie for 24th at the Clemson Invitational, where he posted his best score of the year (213, -3) … Ranked No. 261 in the Golfweek/Sagarin Index.

2017 Summer Highlights: Runner-up at the Southeastern Amateur in his hometown of Columbus, Ga. … Tied for fifth (69) and advanced out of a U.S. Open local qualifier in Newnan, Ga. … T-27 at Palmetto Amateur, T-35 at the Dogwood Invitational, T-40 at the Monroe Invitational.

2016-17:  Strong spring play helped place him on the All-ACC team and the GCAA All-East Region team … Helped lead a solid run-up to the ACC Tournament for Georgia Tech by finishing T8, 17th and T3 in the Jackets’ last three spring regular-season events … Held a share of the lead during the final round and settled for his best career finish (T3) at the Clemson Invitational … That surpassed his previous best of T8 at the Seminole Intercollegiate … Two top-20 finishes this year – T11 at the Carpet Capital and 17th at the Valspar Collegiate … Posted career-best scoring average of 71.93 (second on the team) and finished with the team’s highest individual Golfstat ranking (112) … Ranked No. 99 in the Golfweek/Sagarin Index … Played in all 10 team events, including the Cypress Point Classic, in which he won two of his three matches.

2016 Summer Highlights: Qualified for the U.S. Amateur with a T-2 finish at Newnan (Ga.) Country Club) … Top summer finish otherwise was a tie for sixth at the Eastern Amateur … Finished 17th at the Southeastern Amateur, tied for 30th at the Southern Amateur and tied for 37th at the Dogwood Invitational … T-4 at U.S. Open local qualifier to be an alternate, but did not advance.

2015 Summer Highlights: Won the Eastern Amateur in Portsmouth, Va., firing a 66 on the final day and winning a two-hole playoff … Made only one bogey in 54 holes.

2014-15: Played in seven events as a member of Tech’s travel team, nine events altogether … Best finish was a tie for ninth at the Seminole Intercollegiate (-5) … Finished 37th or better in five other events, including a T34 at the ACC Championship where he counted twice for the team … Tied for 23rd in his collegiate debut at the DICK’S Sporting Goods Collegiate Challenge Cup, and tied for 34th at the Jerry Pate National … Tied for 25th competing as an individual at the U.S. Collegiate Championship … Tied for 54th at the NCAA Championship and counted four Tech all four days … 73.57 average over 28 rounds.

Junior Golf: Second-team Rolex Junior All-American in 2012 … Earned three top-10 finishes and eight other top-20s in junior events in 2013 … Runner-up at the Trusted Choice “Big I” National Championship and finished seventh at the North & South Junior at Pinehurst in 2013 … Won the 2012 Taylor Made-adidas Golf Junior All-Star at Chateau Elan and had two other top-10 finishes in 2012.

High School: Member of five consecutive class A state championship teams from 2010 through 2014 at Brookstone High School … Was the runner up medalist in 2012 and won the individual championship in 2013 and 2014) … Member of the National Honor Society and the Honor Council … Honor Roll and Principals List all four years of high school.