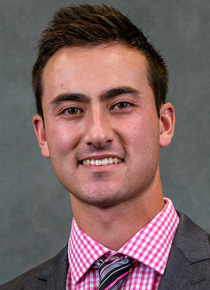 Career Notes: One of the nation’s top 30 junior golfers and one of the top 15 in the class of 2014 … Graduated from high school early and enrolled at Georgia Tech in January 2014 … Did not play that spring, but worked his way into the lineup on a regular basis by the spring of his freshman year … Played in 38 events (72.67 stroke average in 111 rounds) with six top-10 finishes … Ranked No. 162 in the World Amateur Golf Ranking at the end of his collegiate career … Made the ACC Academic Honor Roll all four years at Tech, and was named an All-America Scholar in 2017 and 2018 by the Golf Coaches Association of America.

Used his standout amateur performance from last summer as a springboard to a fine senior year, with a pair of top-10 finishes and his first collegiate title at the General Hackler Championship in March … Earned a spot on the All-ACC team and the GCAA All-East Region team for the first time … Also named a GCAA All-America Scholar … Tied for 17th place at the ACC Championship with rounds of 69-68-72, and clinched the title for Tech with a birdie on the 18th hole in the final group of the final round … Fourth on the team in stroke average at 71.82 (career best), and was ranked No. 98 nationally in Golfstat and No. 97 in the Golfweek/Sagarin rankings … One of three Jackets to compete in all 11 events, although he played as an individual in three of those, all in the fall.

2017 Summer Highlights: Qualified for the U.S. Amateur by winning the sectional qualifier in Salix, Pa. … Had four top-10 finishes in amateur events in the spring and summer … Won the Azalea Amateur in Charleston, S.C., in early April and tied for seventh at the Terra Cotta Invitational in May … Tied for second place at the Monroe Invitational in June, and was runner-up at the Porter Cup in July … Tied for 18th place in stroke play and reached the semifinals of match play at the North & South Amateur … T-24 at the Sunnehanna Amateur.

Did not make the travel roster for post-season, but played well in two spring amateur events (see above) … Played in six events for Tech, one as an individual, posting a 73.28 stroke average on 18 rounds … Tied for ninth at the Maui jim Intercollegiate, matching a career-best accomplished twice before … Best finish otherwise was a tie for 27th at the Amer Ari Invitational … Went 1-2 at the Cypress Point Classic match play event in the fall.

2016 Summer Highlights: Tied for 35th at the Sunnehanna Amateur.

Started all 11 events for Tech, earning a pair of top-10 finishes and compiling a 73.48 stroke average over 31 rounds, second best on the team … Led Tech with a 7th-place finish at the ACC Championship (212, -4) and tied for 17th at the NCAA Tucson Regional … Two other top-20 finishes in the spring, T-9 at the Puerto Rico Classic (212, -4) and T-12 at the Princeton Invitational (143, +1) … Finished T-27 at the Carpet Capital Collegiate and T-28 at the DICK’S Sporting Goods Collegiate Challenge Cup in the fall … T-41 at the United States Collegiate Championship … Played in The Patriot All-American over the holiday break and tied for 11th place in the 84-player field (218, +5).

2015 Summer Highlights: Qualified for the U.S. Amateur out of Seaside, Calif., grabbing the third and final spot in a playoff … Tied for 9th at the Players Amateur in Bluffton, S.C., T20 at The Dogwood in Atlanta, and T23 at the Pacific Coast Amateur, which was held at Eugene (Ore.) Country Club, site of the 2016 NCAA Championship.

Eight spring starts, seven as a counting travel team member … Tied for ninth at the Seminole Intercollegiate, T14 at the NCAA Regional, T23 at the ACC Championship, T27 at the Mason Rudolph Championship and T32 at the Valspar Collegiate … Counted all three rounds at the ACC (even-par 216) … WD for the first 36 holes at the Robert Kepler after being hit in the neck by a stray golf ball, but came back to count for Tech (73) in the final round of the Jackets’ 18-shot win … Started twice in the fall … Made collegiate debut at the U.S. Collegiate Championship a solid one, closing with a 68 for a 1-over-par total of 217 and a T25 finish … T53 at the NCAA Championship and counted for Tech all four days. … Third-best stroke average on the team with a 72.38 norm in 29 rounds.

2014 Summer Highlights: Tied for fourth place at the Southwestern Amateur in Scottsdale, Ariz. … T6 at the North & South Amateur in Pinehurst, N.C. (lost in first round of match play) … T34 at The Dogwood at Druid Hills Golf Club in Atlanta.

Junior: Second-team Rolex All-American by the American Junior Golf Association … Ranked 24th nationally and 11th in his class by Golfweek magazine at the time of his enrollment … Was the No. 2 ranked player in Arizona … Had one victory and six top-10 finishes in junior and high school events from 2011-13 … In 2013, finished second at the AJGA Winn Grips Heather Farr Classic, fifth at the AJGA Thunderbird International Junior and ninth at the PING Invitational … In 2012, he was the runner-up at the FCWT at Greyhawk Raptor, fifth at the AJGA Puerto Rico Open and sixth in the Scott Robertson Memorial.

Personal: Full name is Christopher Robert Hutt Petefish … Born May 31, 1995 in Walnut Creek, Calif. … Son of Steve and Susan Petefish … Began playing golf at age 7 … Enjoys playing tennis and ping-pong … Graduated with high honors in May, 2018 with a bachelor’s degree in business administration.