THE FLATS – In the final six minutes, Georgia Tech forced five Clemson turnovers, while committing zero, went 3-for-4 from the free throw line and Jasmine Carson hit a three-pointer as the Yellow Jackets outlasted the Tigers, 49-47, Sunday afternoon. The win moved Tech to 13-3 overall and 4-1 in ACC play, while keeping the Jackets undefeated at home with their eighth win in McCamish Pavilion.

How It Happened
Tech led 38-32 entering the final 10 minutes of action, after leading by as many as 11 points in the second quarter, but Clemson opened the final frame with an 11-3 run to capture its first lead of the game. Clemson’s Kendall Spray hit her only three-pointer of the game in the fourth quarter, knotting the score at 41-41 for the first time since the opening quarter. The Tigers and Jackets tossed the lead back-and-forth over the next few possessions before Tech regained its final lead when Lorela Cubaj pulled down her own offensive rebound and found an open Jasmine Carson on the wing. Carson knocked down her fourth three-pointer of the game to return the lead, 47-45, to Georgia Tech for the final time. Carson connected on a pair of free throws to cushion Tech’s lead, 49-45, before Kobi Thornton hit the final bucket of the game to account for the final 49-47 tally.

Clemson outscored Tech in the second half, 28-23, but the Jackets posted an 8-4 run to close the game and overcome the Tigers’ late rally. Tech forced 22 Clemson turnovers and converted the miscues into 22 points, while the Tigers only scored seven points off 14 Tech turnovers. 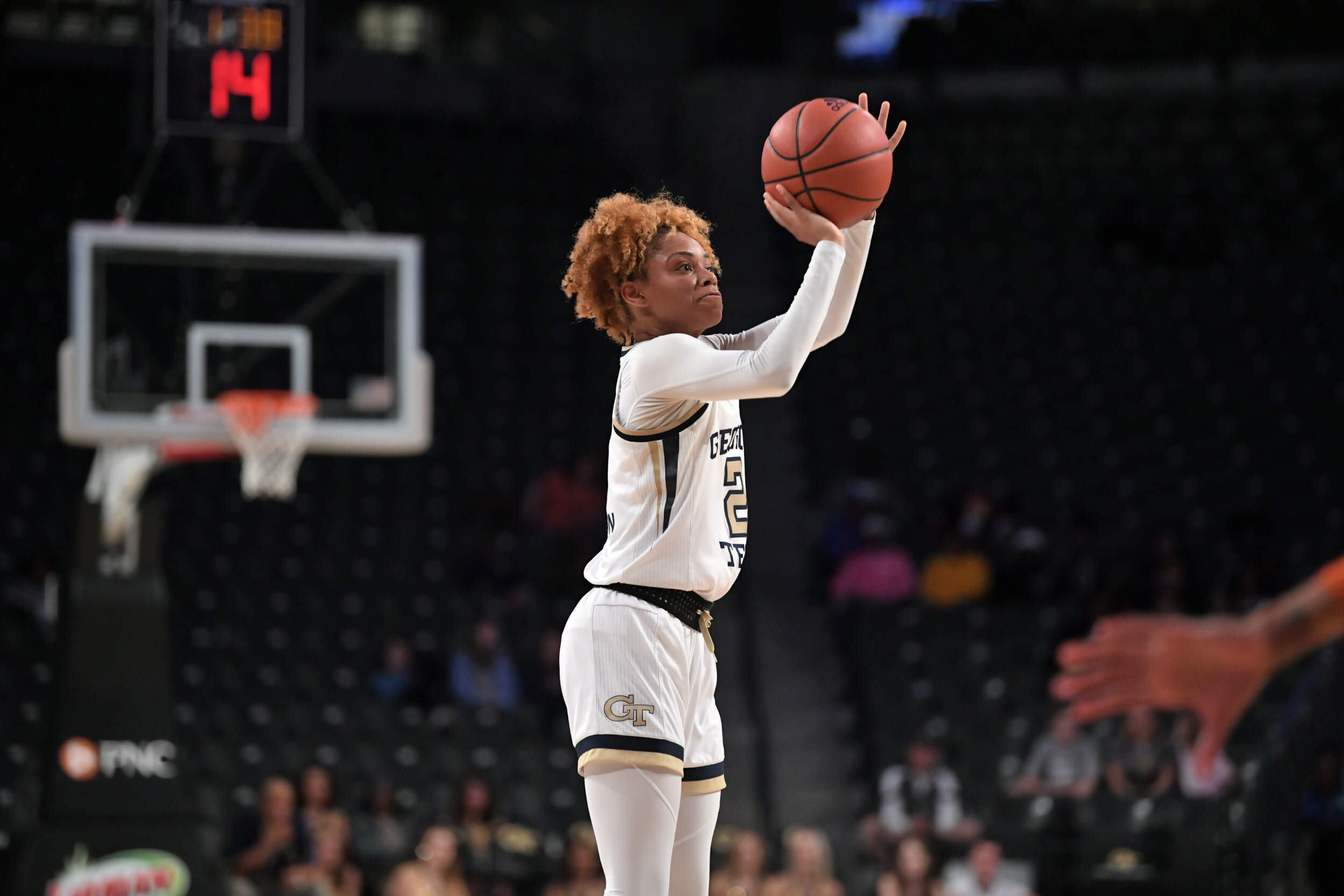 Francesca Pan finished with a team-high 17 points, followed by Jasmine Carson with 16 points. The teams finished even on the boards, each securing 34, but Tech dominated on the offensive glass, 17-8. The Jackets shot 28.8 percent (17-59) from the floor and 76.9 percent (10-13) from the free throw line. Clemson went 6-for-13 at the charity stripe and was led in scoring by Shania Meertens with 17 points. Tech held Clemson’s leading scorer, Thornton, to eight points, and the Tigers’ leading three-point shooter, Spray, to five points.

“I thought Clemson came in here with a great game plan and they executed it well,” said head coach Nell Fortner. “It really took away a lot of things for us offensively, so we struggled. Luckily, we knocked down some big free throws when we had to and we made some really big defensive stops. That’s been our calling card all year long. I thought we did a good job of taking out their top two players, Kobi Thornton and Kendall Spray. But offensively, they shut us down and we’ll have to go back, look at that and figure out how to do a better job next time we play.” 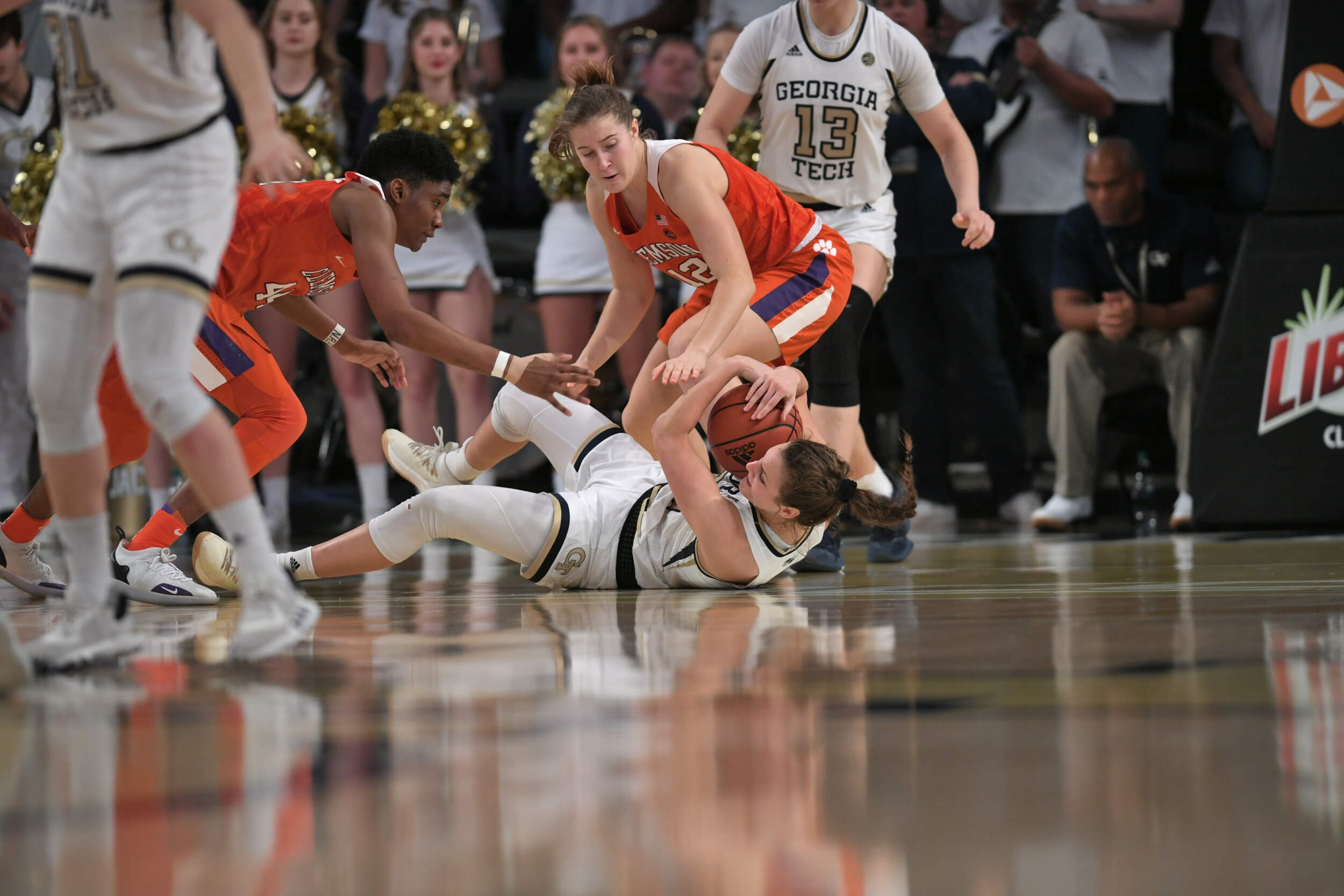 Next Up
Georgia Tech makes a midweek trip to visit Syracuse on Thursday, Jan. 16. Tip is slated for 7:30 p.m. on ACC Network Extra in the Carrier Dome.