Inside The Chart: Watch Party

You can point to his 58 tackles, or his 29-consecutive starts, or his single-digit uniform number, or his status as Georgia Tech’s venerable sixth-year senior.  But the truest illustration of David Curry’s impact on the Georgia Tech defense can be found at practice, away from the ball, 30 yards down from the line of scrimmage.

The club has grown since the season began. Originally it was just Curry, Tech’s 6-2, 230-pound linebacker, kneeling behind the play the Yellow Jackets’ defense was running. Curry would watch along, silent and solitary, absorbing every detail. A self-described visual learner, he does it to get as many “mental reps” as he can during the week. He first picked up the habit as a player at Buford High School in Buford, Ga., then brought it with him to Tech. 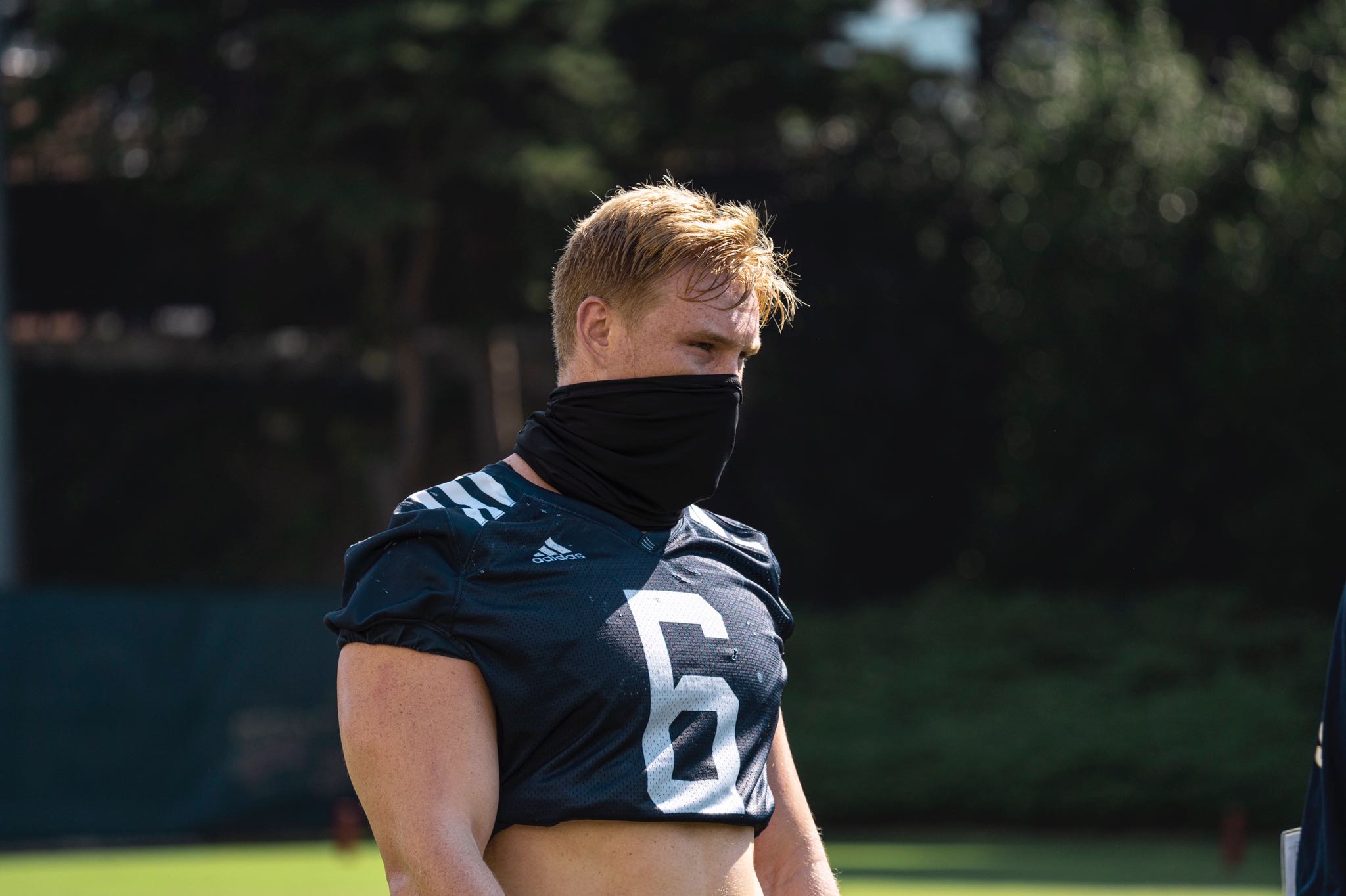 David Curry looks on during a Georgia Tech practice this season.

So no, Curry isn’t one to chase butterflies or swap recipes when he’s not taking a rep. Tech’s mantra of “100% effort, 100% of the time” doesn’t just apply to when a player is on the field.

Veterans began making their way over too.

“The time I realized it probably was [before] the second game of the season. He was the only one back there watching. I’m like, ‘What is David doing?’” said safety Juanyeh Thomas, who’s since become a regular attendee.

“David is like a player-coach. He’s the person you can ask questions to if you don’t know, because he’s already done it and he knows everybody’s job. Going back there with him helps us a lot,” he added.

“When I see David come in here and he works every day, that makes me want to go. He knows that he has a responsibility out here. When the young guys see that, we fall behind that,” Jackson explained.

Nowadays, anywhere from 10 to 15 players gather near Curry, taking stock of the play and pantomiming their role in it. Charlie Thomas, Tariq Carpenter, Derrik Allen – pretty much the entire defensive back seven comes in and out depending on whether they’re on the field. What began as a one-man watch party now rolls double-digit deep, each player taking his own mental rep.

Curry didn’t expect his routine to catch on. He never suggested anyone join him. “Club Curry” grew slowly, organically. But teammates saw the way it helped his performance and readiness on game day, and they wanted to reap the benefits for themselves.

“That’s the kind of legacy that I want to leave for myself, as a guy that was always doing the right thing and doing the extra [work] to help other guys. Now we’ve gotten more than 10, 15 people standing back there, and we’re all constantly talking about the play. So now, you only don’t have guys on the sideline.  Now you have guys in the end zone encouraging [each other],” he said.

It’s an extension of the growth Collins has seen from Curry since he and his staff took over in December 2018.

“He was such a hard worker, and so driven and so passionate at a ridiculously high level, and a lot of times he couldn’t relate to a lot of his teammates because he couldn’t understand that a lot of them didn’t have that same drive and passion and work ethic. Now he’s formed great relationships with his teammates, and those relationships have allowed him to motivate them, connect with them, and then other guys around him started elevating their game – film study habits, preparation habits, and effort-at-practice habits because of those relationships and his example,” Collins said.

The downfield meetings continued this week as Georgia Tech prepared to face NC State at Carter-Finley Stadium in Raleigh (4 p.m. ET, Georgia Tech Sports Network from Learfield IMG College). They’ll continue into the final games of the season. And they’ll almost certainly continue once Curry’s playing days are over, the tradition passed down to the next group of players looking to gain an edge in their preparation.

If the Yellow Jackets continue their climb, it’s a view they’ll all come to savor.