Inside The Chart: Closing Time

The moment remains inked in Brad Stewart’s memory. By the way he tells it, it’s doubtful the details will dim with time.

“I was in [advanced placement] government. I had my phone in my book bag and it was vibrating because we were taking a break in class. I took a look at it and I’ll never forget. I saw his name, Coach [Paul] Johnson, pop up,” Stewart said.

“I went up to my teacher, Mr. Lowry, and I said, ‘Hey, I think I’m getting an important call. Can I go get it really quick?’”

An under-recruited wide receiver out of Benedictine Military School in Savannah, Ga., Stewart’s senior year passed without a major scholarship offer. A state title, Class AA Player of the Year honors, 18 touchdown receptions, a 4.3 GPA, student-body president – none of that had moved the Power-5 recruiting needle. The anxiety had begun to churn.

Johnson, though, had watched Stewart play in a basketball game that winter and marveled at his athleticism. As Signing Day approached, the Yellow Jackets’ head coach told his staff he was willing to take a chance on a player other schools had picked over.

Hence the phone call in the middle of Mr. Lowry’s class.

“I talked to him and he was like, ‘Well, the reason I’m calling is because we’d like to offer you a football scholarship to come play at Georgia Tech.’ I just froze. I was like, ‘Is this really happening?’” Stewart recalled.

“I committed on the spot. I’ll never forget that feeling I had. I came back in smiling from ear to ear. I remember all my friends were like, ‘What happened?  What was that call about?’ I was like, ‘Oh, nothing, it was just my Dad.’”

Over four years, that loyalty has only strengthened for the 6-1, 195-pound senior. The last member of Georgia Tech’s 2015 signing class, Stewart will make his 40th-consecutive start for Georgia Tech (7-5, 5-3 ACC) when it faces Minnesota (6-6, 3-6 Big Ten) in today’s Quick Lane Bowl at Ford Field in Detroit (5:15 p.m. ET, Georgia Tech IMG Sports Network).

He and Johnson, who will step away from coaching after the bowl game, will both look to go out winners.

“It’s just that excitement to know you have one last game to showcase your talents and be around the brothers you love, to be around those coaches one last time as a senior,” Stewart said.

His career had the predictable ebbs and flows of a four-year player. Stewart stepped up when injuries wracked the Yellow Jackets’ receiving corps as a freshman, making his first start by Week 4. He established himself as a solid No. 2 receiver behind Ricky Jeune as a sophomore, catching 19 passes on the Yellow Jackets’ TaxSlayer Bowl-winning team in 2016. He admits to his resolve being tested as a junior, when he went five-straight games without a catch and only finished with four receptions. It took him 34 games to finally haul in his first career touchdown, a 60-yard bomb in the Yellow Jackets’ 28-22 upset of nationally ranked Virginia Tech.

As a senior, numbers as Georgia Tech’s top wideout have been solid, if understated: a team-high 15 catches, 268 yards and three touchdowns. But statistics alone don’t measure Stewart’s value to the Yellow Jackets’ offense. His toughness and unselfishness – especially blocking on the perimeter for Georgia Tech’s nation’s-leading rushing offense – have elevated him to the most rarefied of praise from his head coach.

“Brad Stewart’s been playing his tail off for the last three or four or five weeks. Really, all season long. I can’t say enough good things about the kid,” Johnson said following the Jackets’ 27-21 win over Miami Nov. 10.

“I’d love to have a whole team of Brad Stewarts. Because he certainly puts the team first,” he added. 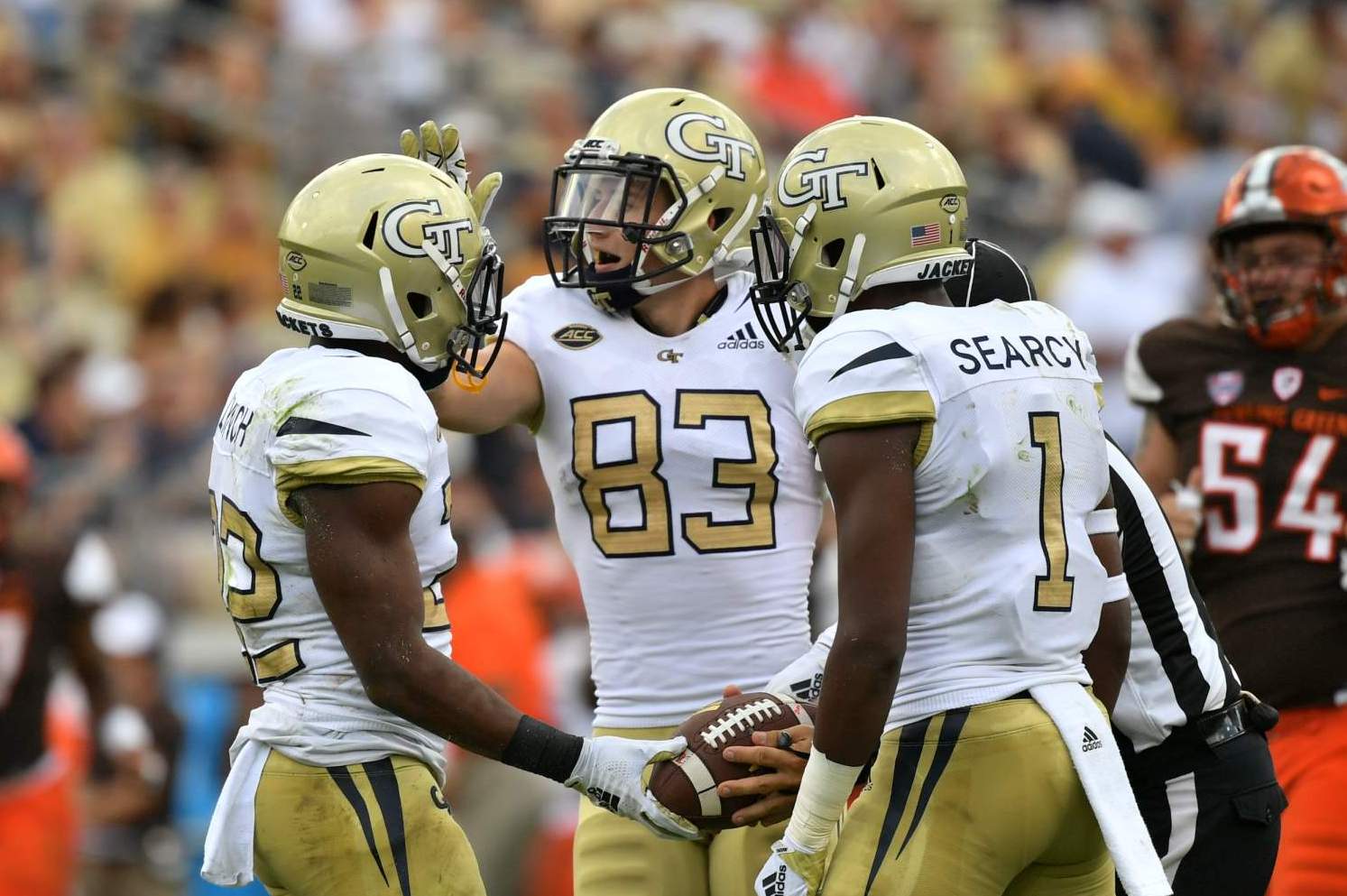 The respect goes both ways. As Stewart explained recently, his closeness with Johnson touches straight to his family roots.

“He reminds me a lot of my grandfather,” he said.

In Johnson, Stewart sees the same gruff honesty and caring interior that made his grandfather a revered figure in Savannah high-school football.

“The way he goes about his business and the way he treats us as individuals, and the respect he gives us, it’s something very honorable, and something I’m very glad to have been a part of,” Stewart explained.

“Some of the stories that a bunch of the alumni used to tell me back in the day when I was in high school, [they] were amazing stories. They’d almost tear up telling me about how much they loved my grandfather and how much he impacted their lives. I just really think that’s the same way Coach Johnson impacted my life,” he added.

He’ll look to send off his coach with one last victory against Minnesota on Wednesday. Stewart might end his career with a dramatic, full-extension catch like the one he had against Virginia last month. He might have no targets and do the unglamorous work of grinding cornerbacks into dust on one option run after another. Either way, he’s ready to close out his career for the coach he’s grown so close with over the last four years.

“It was already special for the seniors because it’s our last game going out, but it makes it even more of a special game with Coach Johnson retiring,” Stewart said.

“He wanted to out on a good note, but now for sure, it’s 100 percent. We’re ready to go out there and do anything we have to do to win.”