Inside The Chart: Center of Attention

He looks like a linebacker straight out of central casting, with the pedigree to match. His Dad played linebacker in the NFL. He shares an apartment with his older brother, a former linebacker at Auburn. During their down time they occasionally break down film together. You know, to unwind.

Square-jawed and broad-shouldered, David Curry certainly looks the part, and the 6-2, 230-pound redshirt junior plays like it too. As Georgia Tech prepares for its final road game of the season against Virginia Saturday (12:30 p.m. ET, Georgia Tech Sports Network from Learfield IMG College), the Buford, Ga., native will look to further pad his team lead in tackles. After recording 10 tackles and a forced fumble against Pittsburgh, Curry is now averaging 8.1 tackles per game, good for eighth in the ACC.

Productive as his game versus Pitt was, it didn’t come without its frustrations.

“I should have had 16, 17 tackles, including special teams. It was not a very good tackling game for me,” said Curry, who set a career high with 16 tackles against North Carolina on October 5.

“[Defensive coordinator Andrew] Thacker preached to me that you’ve got to trust your speed and not overrun things. I overran a few of those tackles and that was kind of the first time this year that it happened to me, so I was pretty disappointed.”

Regardless of those missed opportunities, head coach Geoff Collins – a former college linebacker himself – says Curry’s steadiness is an extension of what he sees from him on a day-in, day-out basis.

“He’s rocking that single-digit No. 6, which is well-earned by who he is in the offseason, the contributions he makes during our workouts, and what a positive teammate he is in the locker room every single day,” Collins said. 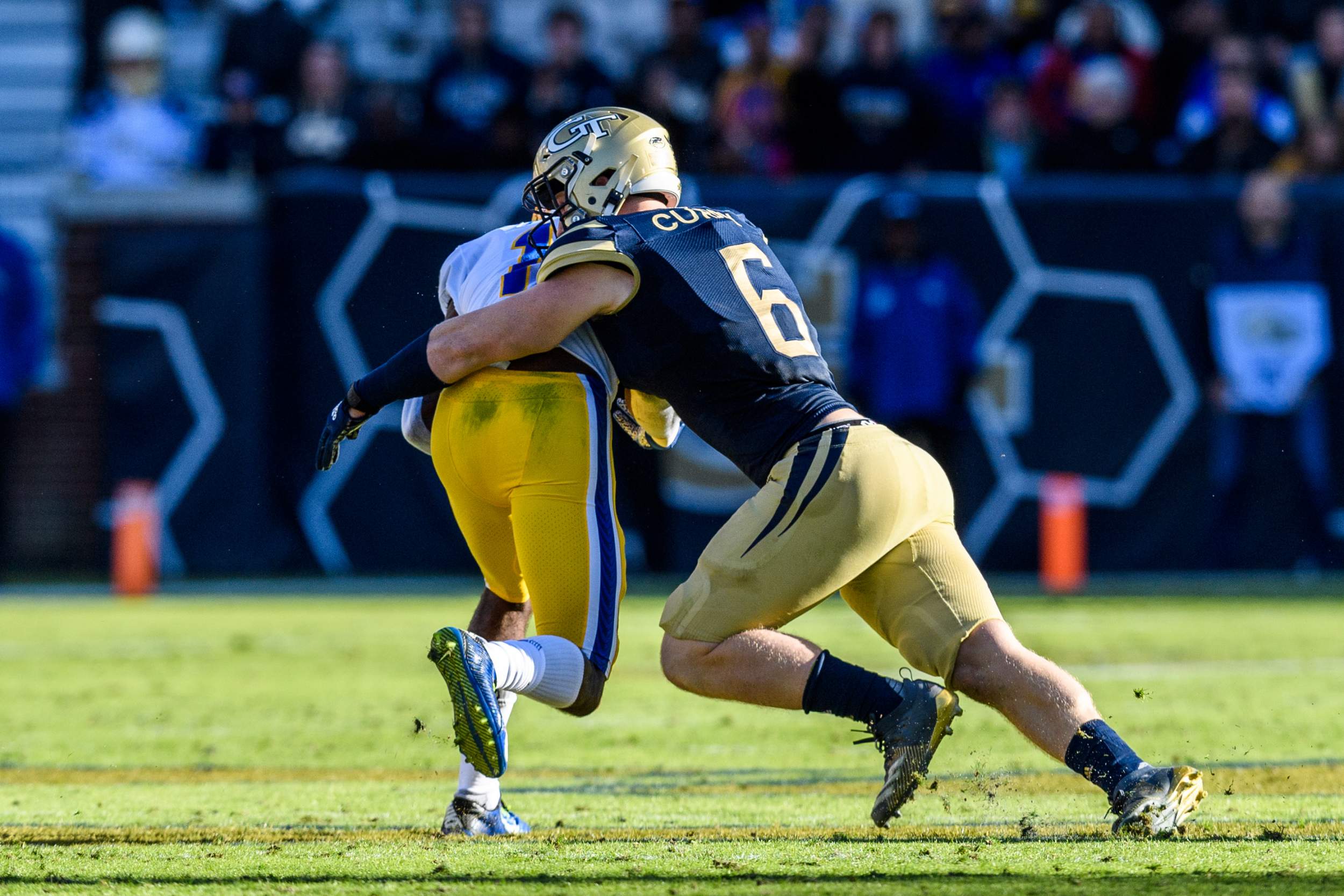 “He’s certainly a paradigm of what a human being looks like in our culture,” said Thacker. “He gives himself the opportunity to play at a high level on Saturday because he prepares the right way every single week.”

His consistency has also been welcome in a Georgia Tech linebacking corps that features an eccentric mix of converted players. To wit:  Bruce Jordan-Swilling was an all-state running back in New Orleans, La.  Freshman Demetrius Knight came to Tech as the 30th-ranked dual threat quarterback in the country out of Locust Grove, Ga. Charlie Thomas led Thomasville High in Thomasville, Ga., to its first undefeated season in 29 years as a quarterback and safety.

Others have had to adapt to new roles. With Jordan-Swilling out for the year and Thomas limited by injury against Pittsburgh, sophomore Quez Jackson took over most of the snaps at weak-side linebacker – a position he had never played before.

And amid that flux, there’s Curry, one of the Jackets’ three returning starters on defense, a fifth-year junior who has given the team a sound, sturdy presence in the middle of the field. He may lead the team in tackles, but Collins says his value manifests itself the most before a play.

“Everybody on the defense, from the front seven to the back end, trusts him to make the right calls. He gets us in the right checks. He does a great job communicating with everybody. And then he goes out there and plays at a high level as well,” said Collins, adding that Curry has also been a standout on Georgia Tech’s punt unit.

Curry says he embraces his teaching role with the younger players and wants to be an on-field extension of Collins’ “developmental program” mantra.

“Coach Collins expects the older guys that have a process, that have been there, that have developed, to teach the younger guys because that’s how a culture is really built,” he said.

It helps that he practically entered into the family business. His, Dad Buddy, starred at North Carolina before an eight-year career with the Atlanta Falcons, where he won 1980 NFL Defensive Rookie of the Year honors. Older brother, Jessel, played inside linebacker at Auburn and Delaware.

“He was definitely a hard hitter. It was a different style of football back then. From what I’ve seen, I love watching him play. Just his intensity, his care factor – I kind of try to resemble that,” he said. 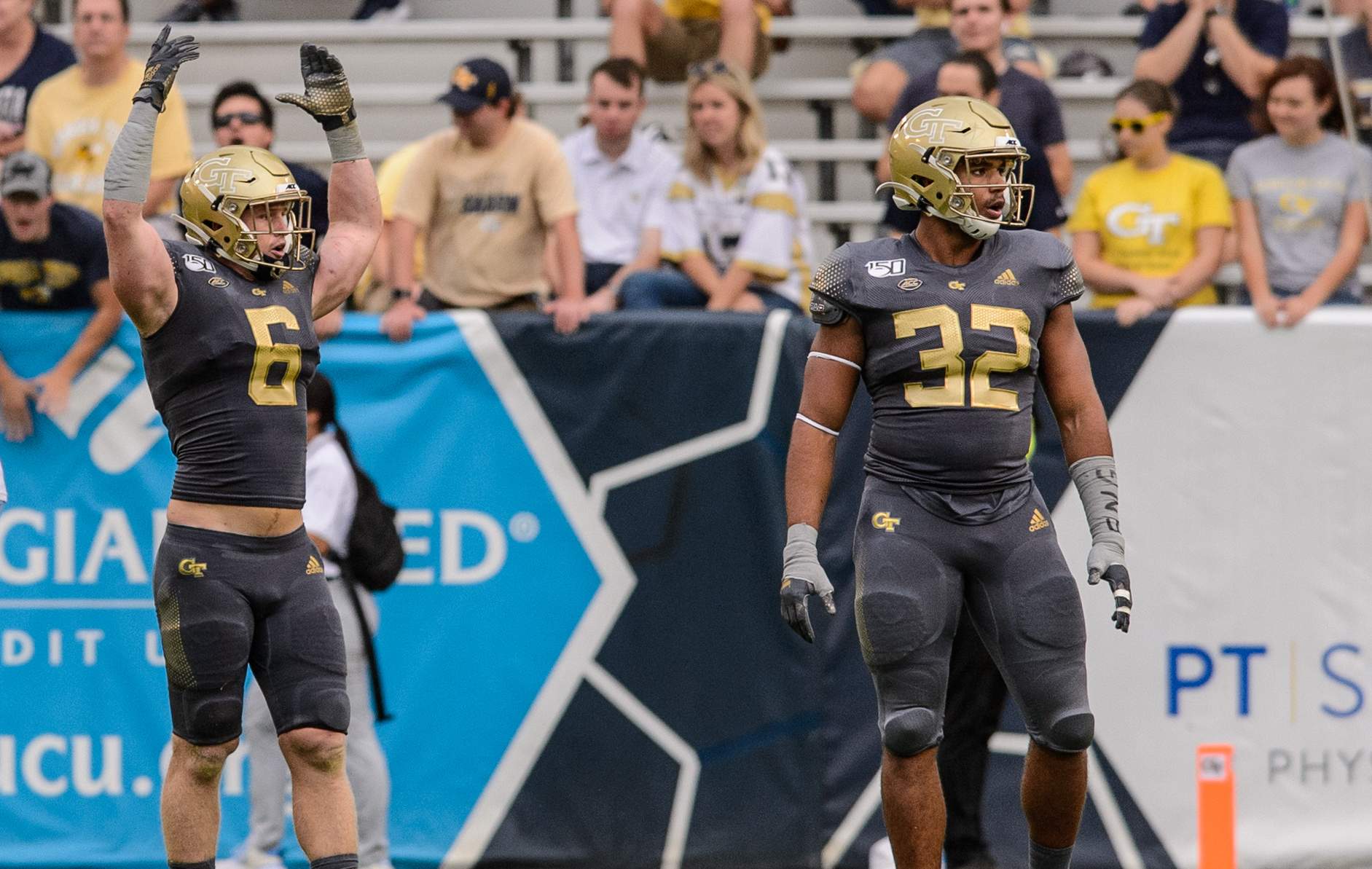 So a chip off the old block?

Curry chuckled. “If I can be half the player and half as tough as he is, man, I think I’ve got a shot. He’s my idol, and I try every day to be the man and football player that he is,” he said.

With 65 tackles, 18 more than the next-highest Jacket, he hasn’t done a bad job aping his Dad. Thanks to his father, the roots of his family tree also extend into the state where he’ll play on Saturday. Buddy grew up in Danville, Va., and David was committed to Virginia for nearly a year before opting to sign with Georgia Tech.

Curry says that former commitment doesn’t register much anymore when he plays the Cavaliers. He’s instead more focused on containing Bryce Perkins, Virginia’s dynamic senior quarterback who set a school record for total yards of offense (490) in the Cavs’ win over North Carolina last week.

“They want to throw the ball a lot and they want to space us out, so it’s going to be a lot of open-field tackling and a lot of sure tackles,” Curry said.

He’s done plenty of that this year – and quietly, much more for the Yellow Jackets’ defense.