Inside The Chart: Built to Last

The buses rolled up to the Edge Athletic Center around 9 p.m., a tough loss to Virginia followed by an exhausting afternoon and evening of travel back to Atlanta. By 7:15 a.m. Sunday, Geoff Collins and his coaching staff had already gathered inside the Georgia Tech football offices, ready to start the inquest of their game against the Cavaliers.

As Collins walked down a first-floor hallway, he stole a glance inside an auxiliary conference room. There, Georgia Tech’s four tight ends, led by graduate transfer Tyler Davis, were already clustered around a screen, immersed in their own film review.

The sight of four players joining their coaches in the football offices – especially at a time when most of their fellow students were deep in REM sleep – may catch some off-guard. It hardly surprised Collins.

“That’s pretty cool. Nobody told them to do that. That’s just part of who they are,” he said.

“That’s every Sunday,” he said.

“I’ve always been a morning guy. I guess I’ve gotten these guys to be morning guys as well.”

Davis says he arrives most Sundays around 6:45 a.m. His reasons go beyond mere film study. After playing his first three years at UConn, Davis knows the clock is ticking on his own college career. He wants to savor every minute he has left, even if those minutes come in the pre-dawn darkness.

Davis began this year as a curiosity, Georgia Tech’s first tight end since 2007. He’ll leave it as an unquestioned leader and foundational pillar of Collins’ program.  This past Sunday, Davis and his roommate, grad transfer offensive lineman Jared Southers, were voted by their peers as two of Georgia Tech’s permanent captains for the 2019 season.

“If you were writing a book on how to handle being a grad transfer going into a college football program, you would just have to go ahead and follow the last 10 months of how Jared Southers and ‘T.D.’ have done it. They have been nothing short of spectacular,” Collins said on his weekly radio show.

Collins, of course, didn’t have a single tight end on his roster when he arrived at Georgia Tech last December. When he sought a grad transfer to fortify that position, he didn’t have to look far. His Temple teams faced Davis’ UConn Huskies each of the last two seasons in the American Athletic Conference.

“He was clearly their best player,” said Collins, himself a former tight ends coach at Tech (2001).

In three seasons in Storrs, the 6-5, 250-pound Davis appeared in all 36 games, finishing with 47 catches for 500 yards and seven touchdowns. Six of those scores came in 2018. A seventh, in the regular-season finale against Temple, would move him into second place all-time for touchdowns in a season by a UConn tight end.

Temple won the game handily, but the Huskies had a third-and-goal late in the game. Coaches called a pass play for Davis.

“I’m like, ‘Here’s my shot. Here it is.’  I run out into the flat, and there are two defenders out there. So Coach Collins, the master of mayhem, got me there. I learned it early,” Davis laughed.

Said Collins drily: “He was a pretty good player.” 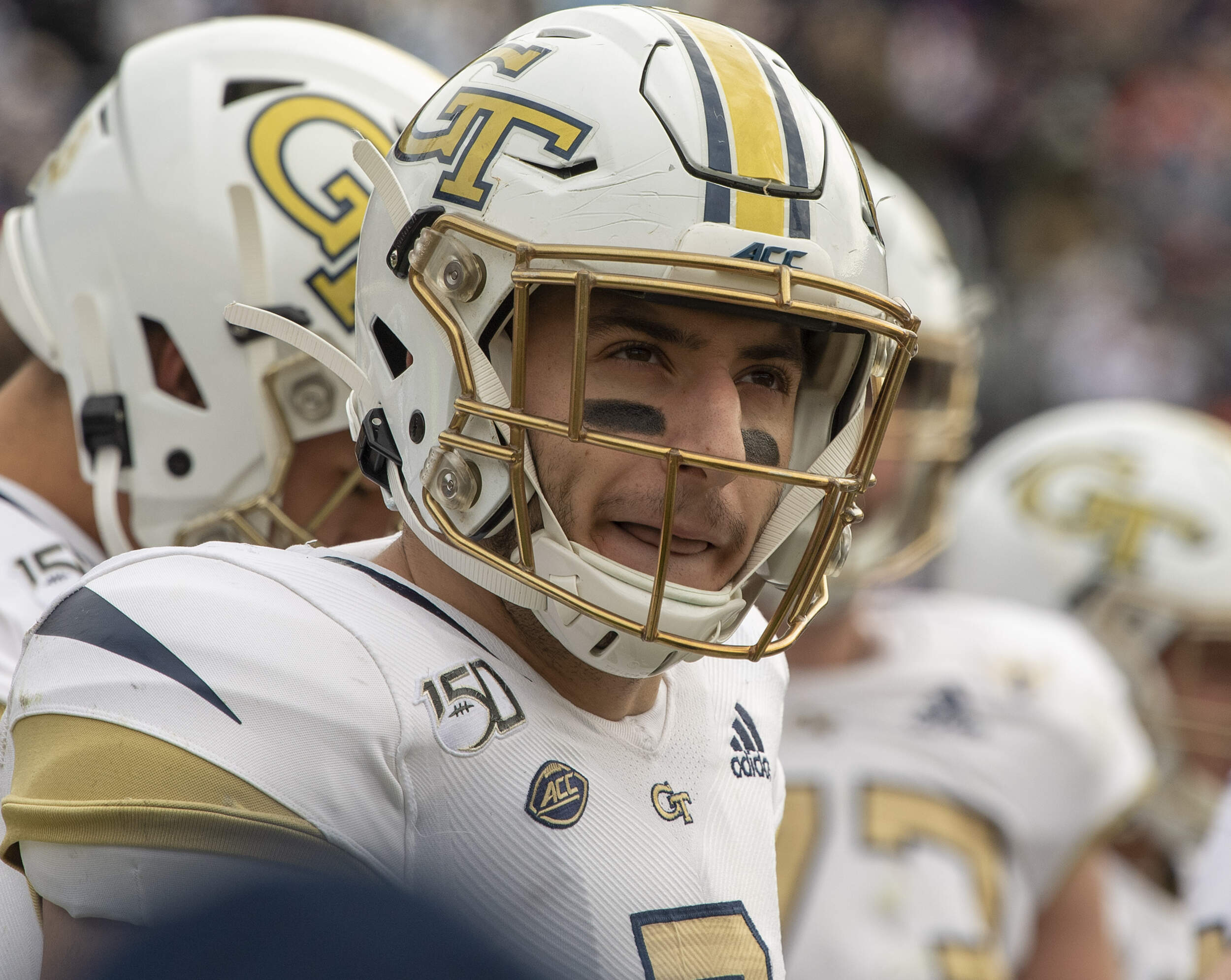 Davis graduated from UConn with a degree in financial management and had already begun a master’s program during the 2018 fall semester when he decided to explore a grad transfer. Across college football, grad transfers have to weigh the opportunity cost of a potential move for their final season. They leave the familiar for a new playbook and no promise of playing time. Their final year of eligibility could end in glory. Or it could end with a whimper.

At Georgia Tech, those unknowns became part of the draw. Davis knew his numbers might drop off as Tech adjusted to a radically different scheme. But he also wanted to create something more lasting.

“Stats are stats, but when you lay a foundation down that’s going to last for years to come, that means more to me. Anybody can get stats, you know what I mean? I’m setting a standard for these young guys to hopefully learn, and that’s what means the most,” he said.

He also wanted to reconnect with the kind of culture he experienced in the offseasons at UConn. His former strength coach, Matt Balis, left after his redshirt freshman season for a similar position at Notre Dame. Balis worked with Lew Caralla, Georgia Tech’s strength and conditioning coach, at Mississippi State. Davis saw plenty of similarities in their offseason programs and wanted that challenge again.

“We’re building a program. Bonds forged through shared adversity. We put them in some tough situations so that they bond and they’re able to communicate and be able to fight through when times get tough,” Collins explained.

“The reason why Tyler chose to come here was because of that. He wanted that in his life. He had missed that part of it that Matt Balis had brought when he was at the University of Connecticut.”

Tight ends coach Chris Wiesehan says Davis’ leadership was even more valuable during the summer, when NCAA rules limit the amount of time that coaches can spend with their players. For a position group that had been encased in amber for the past 11 seasons, Wiesehan knew he could count on Davis and Cooksey to reinforce his teachings.

That accountability has carried into the regular season, where Davis has kept his tight ends on a meticulous watch. He times out how long they lift, how many minutes they spend in the hot or cold tub, how long they study film – and holds them to it.

“I’m always on top of them. Anytime I see them sitting around for more than 10 minutes, I make them get up and do something because I’m like, ‘You’re just wasting time.’ We joke about it, but in a way I’m serious,” he said.

That discipline, he says, has not only led to growth on the field, but a closeness that Davis has come to treasure. At a Friday walk-through earlier this season, Deveney asked Davis if he could wear his practice jersey as a tribute.

“It’s crazy to see that I was once Dylan Deveney in his shoes.  It meant a lot to me, how much I put into it, that a freshman would come up to me and ask something like that,” he said.  The two Dylans now wear the practice jerseys of the two senior Tylers every Friday.

“Seeing the transition from what they ran here in the past to what we’re doing now, it’s really impressive to see the guys how they’ve taken accountability and they’re hungry to succeed and how hard they want to work to be successful,” said Davis.

The rest of the Yellow Jackets have started paying homage as well. To incentivize their involvement in the offense, quality control assistants Joe Battaglia and Tim Conner now have to do push-ups every time a tight end catches a ball in practice or a game.

“James Graham and the rest of the guys were in on it, and wanted to see how many pushups we could accumulate during the [Virginia] game,” Collins said.

So after Davis accounted for four catches and Deveney had two against the Cavaliers, how did Collins’ staffers hold up? 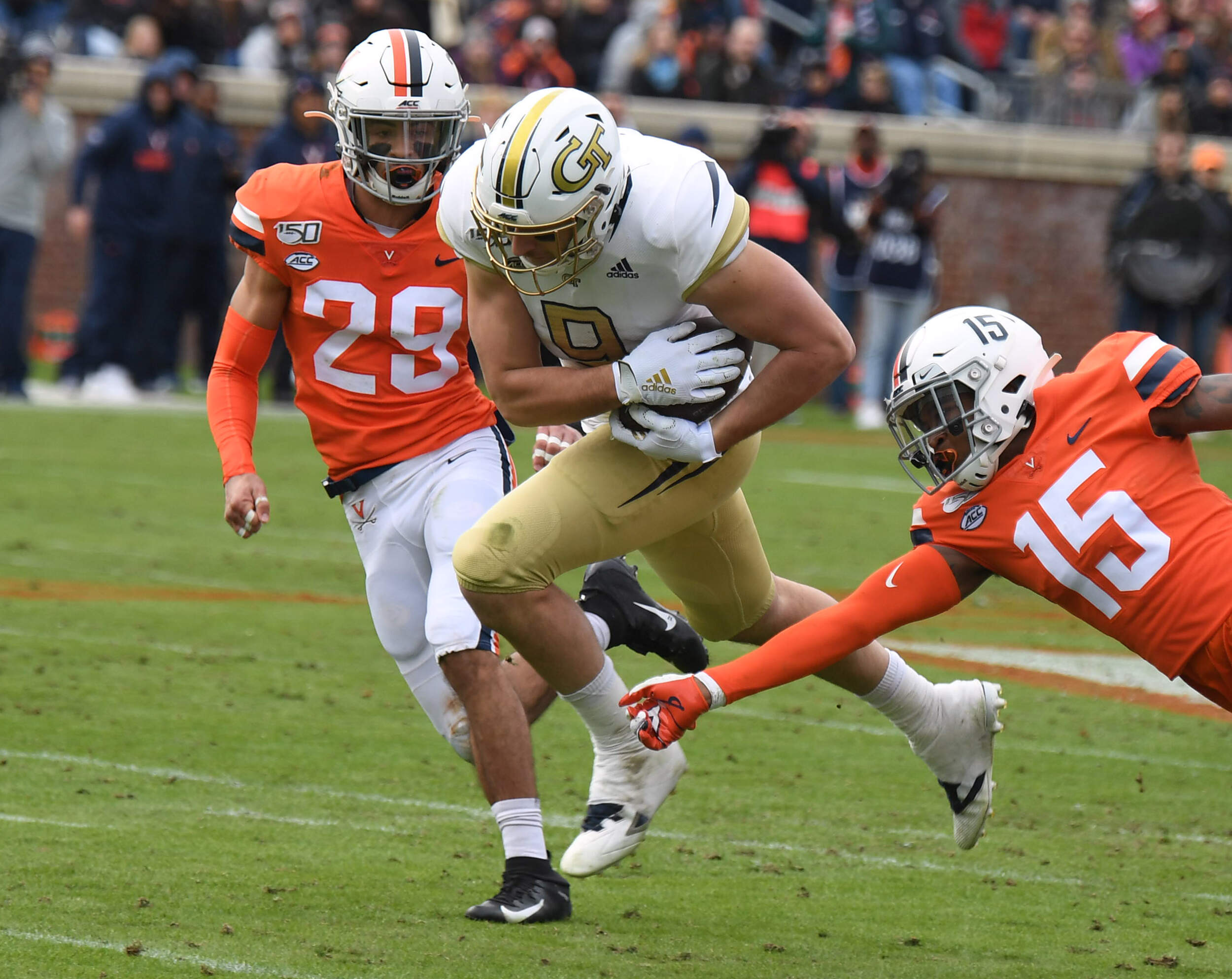 “They were probably a little shaky,” Collins said.

With two games left in his Georgia Tech career, Davis will try to coax a few last sets out of his coaches.  Entering Tech’s Thursday night showdown against NC State at Bobby Dodd Stadium (8 p.m. ET, Georgia Tech Sports Network from Learfield IMG College), Davis has racked up 14 catches for 131 yards. Almost half (6) have come in the last two games.

His legacy, though, will go beyond stats or the answer to a trivia question (“Who made the first catch by a Georgia Tech tight end since the position was reintroduced in 2019?”). As his career winds down, Davis is confident in the contributions he’s made during his lone season at Tech.

“As long as I leave this place better than I found it, I feel like I did my job. I did my role. And I can turn on the TV a couple years from now and be really proud of what I did,” he said.

But first, Tyler Davis will turn on the film of N.C. State. If you want to find him, you’ll probably need to get to the office early.