THE FLATS – Georgia Tech will lift the lid on its new 20-game Atlantic Coast Conference schedule at NC State on Nov. 5, and host Syracuse for its home conference opener at McCamish Pavilion on Dec. 8. The ACC announced the full conference basketball schedules for all 15 members Thursday evening.

Among the highlights are a visit from 2019 national champion Virginia on Saturday, Jan. 18, five-time NCAA champion Duke on Wednesday, Jan. 8, and weekend visits from NC State on Jan. 25 and Miami on Feb. 29.

The pre-holiday games against the Wolfpack and the Orange will be televised on the new ACC Network, which will air 11 of Georgia Tech’s 18 conference games, including the first eight.

After playing in the Diamond Head Classic over the Christmas holiday, the Yellow Jackets resume their ACC schedule with a pair of road games on New Year’s Eve at Florida State and Jan. 4 at North Carolina before the Blue Devils come to Atlanta on Jan. 8. Tech then travels to Boston College (Jan. 11) before returning to McCamish Pavilion for games against Notre Dame (Jan. 15) and Virginia (Jan. 18. Another road game at Louisville (Jan. 22) follows before the Jackets host NC State (Jan. 25).

The Jackets close out the month by playing a non-conference game against Morehouse on Jan. 28 at McCamish Pavilion, filling one of the two bye slots in their ACC schedule.

Tech begins the month of February with its return visit to Notre Dame (Feb. 1), followed by a home game against Virginia Tech (Feb. 4), a road game at Pittsburgh (Feb. 8) and a McCamish Pavilion date against Louisville (Feb. 12).

Back-to-back road games follow at Wake Forest (Feb. 19) and Syracuse (Feb. 22) before the Yellow Jackets host Clemson (Feb. 25), Miami (Feb. 29) and Pittsburgh (March 4) in a three-game homestand at McCamish Pavilion. A road trip to Clemson on March 6 closes out the regular season.

Remaining tip times and television coverage for the Yellow Jackets’ non-conference games will be announced in the near future. Tech’s non-conference schedule features home games against Arkansas (Nov. 25) and Nebraska (Dec. 4) and road games at Georgia (Nov. 20) and Kentucky (Dec. 14). The Jackets open their home slate Nov. 11 against Elon. 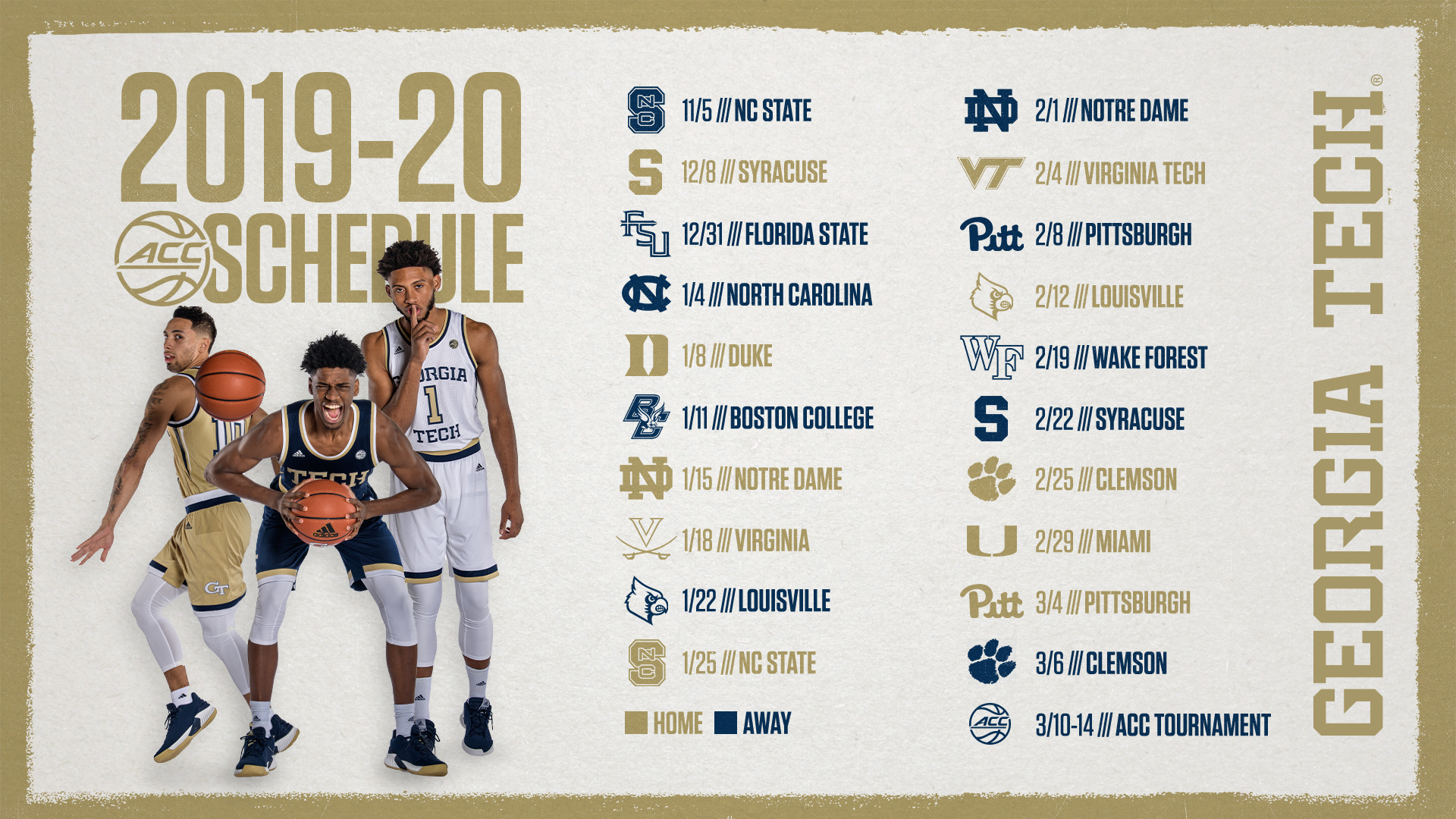 GET OLD AND STAY OLD

Head coach Josh Pastner welcomes back the Yellow Jackets’ top three scorers from the 2018-19 season – Jose Alvarado, James Banks III and Michael Devoe – who accounted for 48.4 percent of Tech’s points, 41.6 percent of its rebounds and 47.2 percent of its minutes.

The Jackets also will benefit from a pair of transfers – 6-7 forward Jordan Usher from Canton, Ga., who becomes eligible in December after a season and a half at Southern California, and 5-11 guard Bubba Parham, an all-Southern Conference performer eligible immediately after spending two seasons at VMI.