THE FLATS — Derrick Favors and Thaddeus Young landed with new teams during the recent free agent period … Anthony Morrow and Will Bynum join Dion Glover come to Atlanta with the Big3 summer league … more in the Georgia Tech #ProJackets Report.

The Utah Jazz did not exercise its option to keep Derrick Favors for another season, ending his tenure with the club at nine seasons, and instead traded him on draft night to the New Orleans Pelicans for second-round draft choices in 2012 and 2023.

“We are ecstatic to be able to introduce a player and person of Derrick’s caliber to our Pelicans’ family,” said Pelicans Executive Vice President of Basketball Operations David Griffin. “As a selfless, 27-year old elite rim protector, with what we believe is untapped offensive potential, he is just entering his prime. We believe he will be a vital piece of our nucleus moving forward.”

Thaddeus Young became a free agent at the end of the 2018-19 season, and ended a three-year stint with the Indiana Pacers by signing a three-year, $41 million contract with the Chicago Bulls, according to the Chicago Tribune. “Young, who at 31 will become the oldest Bull, has been a model of consistency throughout his 12-year career,” write K.C. Johnson of the Tribune. “The 6-foot-8 forward, originally the 12th pick by the 76ers in the 2007 draft, has averaged 13.4 points and 6 rebounds in 901 games, including 671 starts. He is a career 50.1% shooter.”

“As you guys probably know in Indiana, that was one of the biggest things; we had to switch up the culture,” Young told reporters in Las Vegas. “In switching up that culture we were able to have two consecutive 48-win seasons and I would like to think I was a big part of helping us switch the culture. I just want to do the same thing similar to what I did in Indiana, bring that hard work mentality, that hard hat mentality each and every night. Being there for my guys and staying healthy and making sure I am willing my guys to victory and just bringing that leadership and attitude and that dog and that grit to each and every game.”

Iman Shumpert remains a free agent after finishing the 2018-19 season in Houston, but could re-sign with his former team. The Houston Chronicle reports “In 20 regular-season games with the Rockets, he averaged 4.6 points, making 34.7 percent of his shots and 29.6 percent of his 3s and without the defensive play he had displayed previously in his career or would in the postseason … The Rockets will have Bird rights to sign Shumpert. If they are to have trouble bringing back or landing other reserves when limited to their mid-level exception and minimum contracts, they could have much more flexibility to sign Shumpert.”

2004 Final Four star Will Bynum, four-year sharpshooter Anthony Morrow and star guard Dion Glover, came to Atlanta with one of the Big3 summer league’s four new teams, Bivouac. They visited with our writer Matt Winkeljohn to give Georgia Tech fans some perspective on life in the league. Morrow, a nine-year NBA veteran who did not play last season but is not yet ready to hang it up, talks about why he joined the Big3 with the website Heavy.com.

Josh Okogie, who is participating in the NBA Summer League in Las Vegas, and former Tech post player Alade Aminu were named to a preliminary 44-man training camp roster for Nigeria in advance of the 2019 FIBA World Cup in China. Former Tech point guard and current G-League assistant coach Mfon Udofia is serving on the country’s coaching staff. 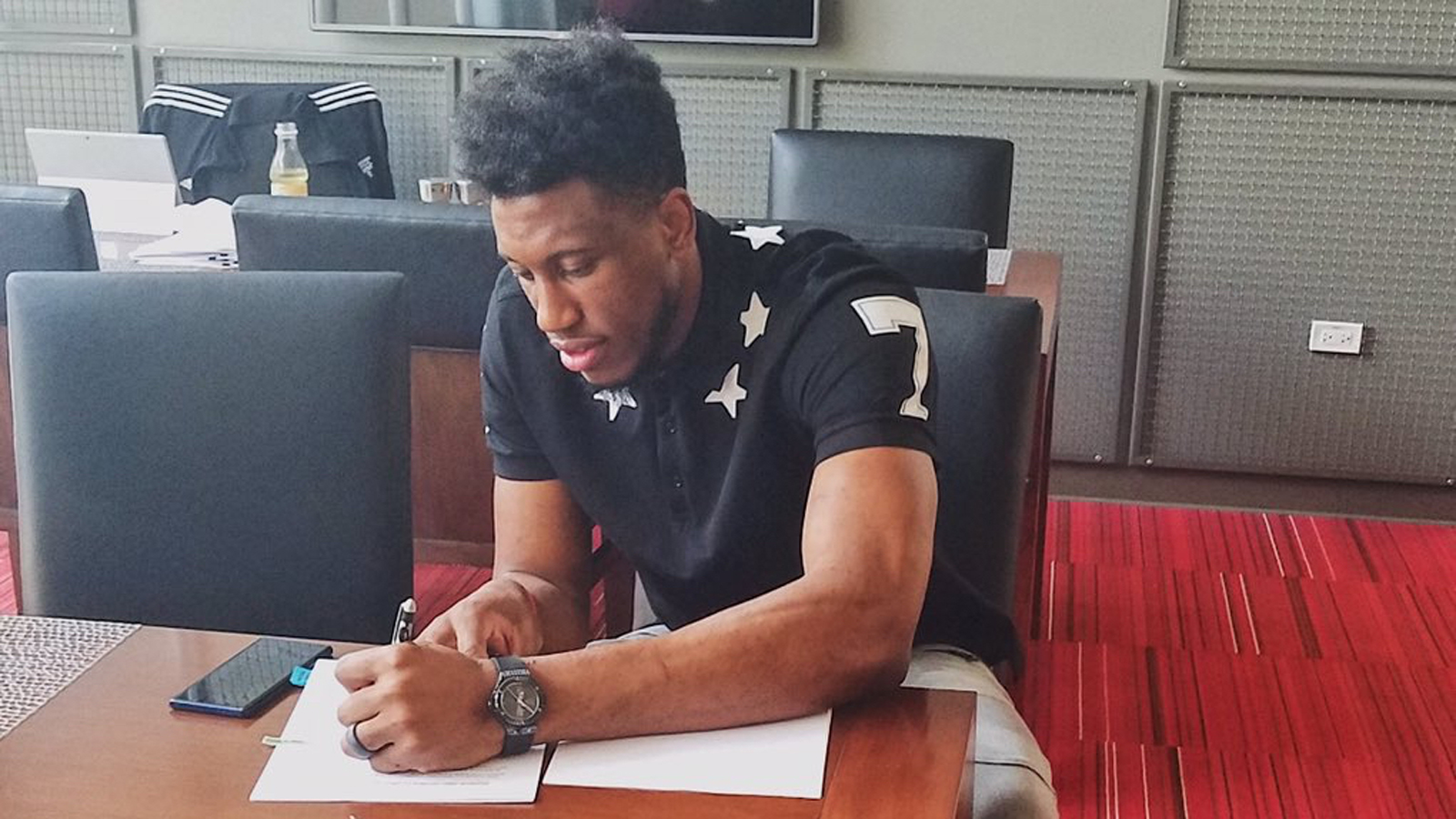 Above: Thaddeus Young signs with the Bulls.

Josh Okogie (6’4”-G-98, graduated ’18, currently in the NBA) led Minnesota Timberwolves to a victory over the Atlanta Hawks (1-3) crushing them 90-66 in the NBA Summer League in Sunday night’s game. He was MVP of the game. Okogie scored 15 points, had 7 rebounds and made 3 blocks in 22 minutes; quite an impressive performance considering it’s only his first season in pro basketball. The Minnesota Timberwolves have 4-0 record this season. So far his team won all four games in the Preseason Tournament. They will play only one more game in the NBA Summer League Preseason Tournament. And that game will be critical. Okogie has relatively good stats this year 12.5ppg, 4.8rpg and 2.8apg in four games. He is a naturalized Nigerian.

Other former Georgia Tech players, who play in pro basketball: