Above from left:  Dion Glover, Mario West, Will Bynum and Anthony Morrow were in Atlanta with the Big3 for Sunday’s action at State Farm Arena.

By Matt Winkeljohn | the Good Word

It came as no surprise the last Sunday when Will Bynum drove the left baseline and cooked Alan Anderson for a layup that gave Bivouac a 19-12 lead over Triplets in State Farm Arena.

He’s done that thousands of times, notably while wearing a Georgia Tech jersey as he plowed through Oklahoma State’s Cowboys to drop a shot with two seconds left in a game to give the Yellow Jackets a 67-65 lead. That held up in the 2004 NCAA semifinal.

If you just walked in out of the blue, though, it was a surprise to see Bynum wearing the same jersey as former Tech teammate Anthony Morrow and even Dion Glover, who preceded both of them on The Flats.

They’re teammates now, forming half the roster for Bivouac as one of 12 teams in Big3, the 11-week, three-on-three, half-court professional basketball league created in 2017 by rapper/actor Ice Cube and entertainment mogul Jeff Kwatinetz. The league has become a thing, routinely drawing 10,000 or more fans each weekend with games televised on CBS or the CBS Sports Network.

You could tell last Sunday that players – a mix primarily of former NBA regulars and Americans who’ve played a lot of international ball — were having a blast. Why not? They’re being paid $10,000 per game and then some to do what they love once a week. There’s plenty of trash talking, and intriguing rules that speed up games played to 50.

And they’re in America! When Bynum, 36, last drew a paycheck for playing his beloved basketball, he was in Turkey last winter.

“Being able to play at home during the summer in front of family and friends, it’s just an amazing thing,” Bynum said after scoring 10 points with four assists in a 51-45 loss to Triplets, who were led by former Atlanta Hawk Joe Johnson.

Bynum, 36, Morrow, 33, and Glover, 40, are teammates with former Atlanta Hawk Josh Smith, 33, an Atlanta native who is the principal of Bivouac. Smith years ago gave thought to attending Tech and scrimmaged regularly with Bynum and Morrow after competing against them in youth basketball and before beginning a 12-year NBA career, mostly with Atlanta.

Smith invited Bynum and Morrow to be co-captains of this expansion team (the Big3 expanded this year from eight to 12 teams), and then he and head coach Reggie Theus drafted Glover, who’s in his third Big3 season. 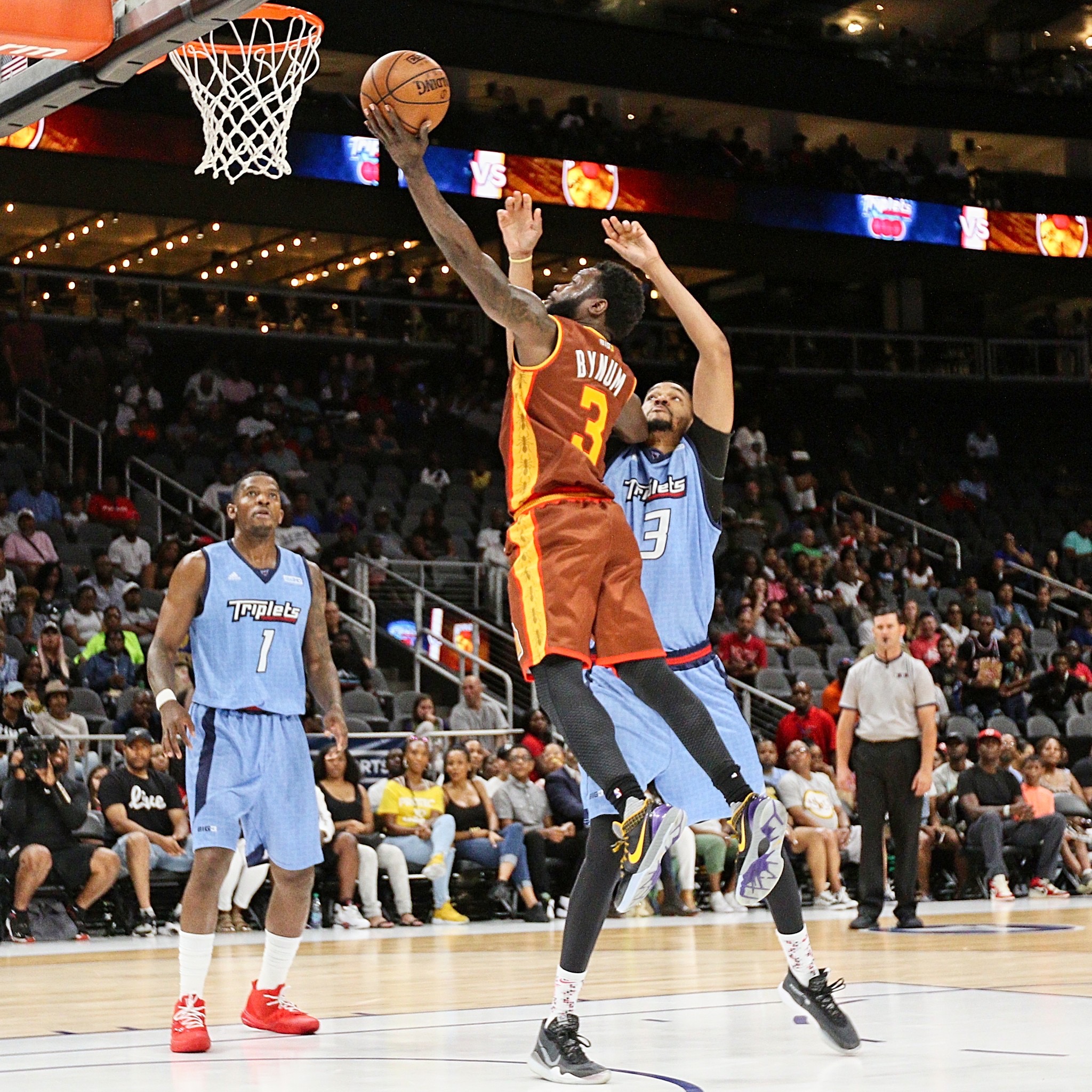 Deja vu! Reminiscent of his game-winning basket against Oklahoma State in the 2004 national semifinal game, Will Bynum streaks to the basket for a layup Sunday against the Triplets.

The 12 Big3 teams play eight games in a nine-week span (each team has a week off late in the season), and the top eight teams will square off in playoffs Aug. 25 at Smoothie King Center in New Orleans before semifinals and a championship game Sept. 1 at Staples Center in Los Angeles.

Morrow was invited to play the last two seasons, but this is his first in uniform. After graduating from Tech in 2008 as one of the top 3-point shooters in school history, he went undrafted by the NBA before signing a free agent contract with Golden State, beginning a nine-year NBA career with the Warriors, New Jersey, Atlanta, Dallas, Oklahoma City and Chicago.

Surely, you remember him. In his first NBA start, he set a record for undrafted NBA rookies by scoring 37 points (and grabbing 11 rebounds) for the Warriors in a game against the Clippers.

“They asked me after my first year (out of the NBA, in 2017), but I was still waiting around trying to see what the league was going to do, and kind of was looking at some overseas options,” Morrow said. “This year, they asked me again, and Josh was a captain and said he wanted me and Will to be co-captains. I said, ‘That’s cool.’

“I’ve been knowing Josh for years, since high school and AAU, being in Atlanta and all, same agent (Atlanta’s Wallace Prather). It’s good. It’s competitive. It’s quick games. It’s not as much wear and tear on your body as the league … good cities. You get good treatment, the same love … and you still get to be with your family.”

Glover’s been in the Big3 since it launched. He was on the Trilogy team that won the first title in 2017. He hasn’t played in the first three games this season, though, because of a calf/shin injury he sustained in the preseason.

He’s similar to Bynum and Morrow, who live in their hometowns of Chicago and Charlotte, respectively. Glover lives in Atlanta, near where he was born (Marietta) and played high school ball (Cedar Grove, in southeast Atlanta).

For about half the year, Glover is an assistant coach with the NBA’s G-League affiliate in Grand Rapids, Mich. His wife and children go with him wherever he goes. “We home school them,” he said of his daughters.

He relishes the competition in Big3.

“It’s very competitive. Of course, guys know how to play. They’re former NBA players or guys making great money overseas, so they really know how to play,” Glover said. “They’re looking for exposure because it’s one on one. It’s hard to stop guys one-on-one because there’s so much space and so it really challenges you defensively.”

That’s true. There is so much space in Big3 that there is non-stop switching of defensive assignments, which is how you found the 6-foot Bynum at times defending the Triplets’ Johnson (6-8) or even Al Jefferson (6-11). The shot clock is 14 seconds.

Size and shooting matter in the Big3. Ballhandling, not so much. That probably works against Bynum, who wants to keep playing pro basketball, preferably in the NBA. 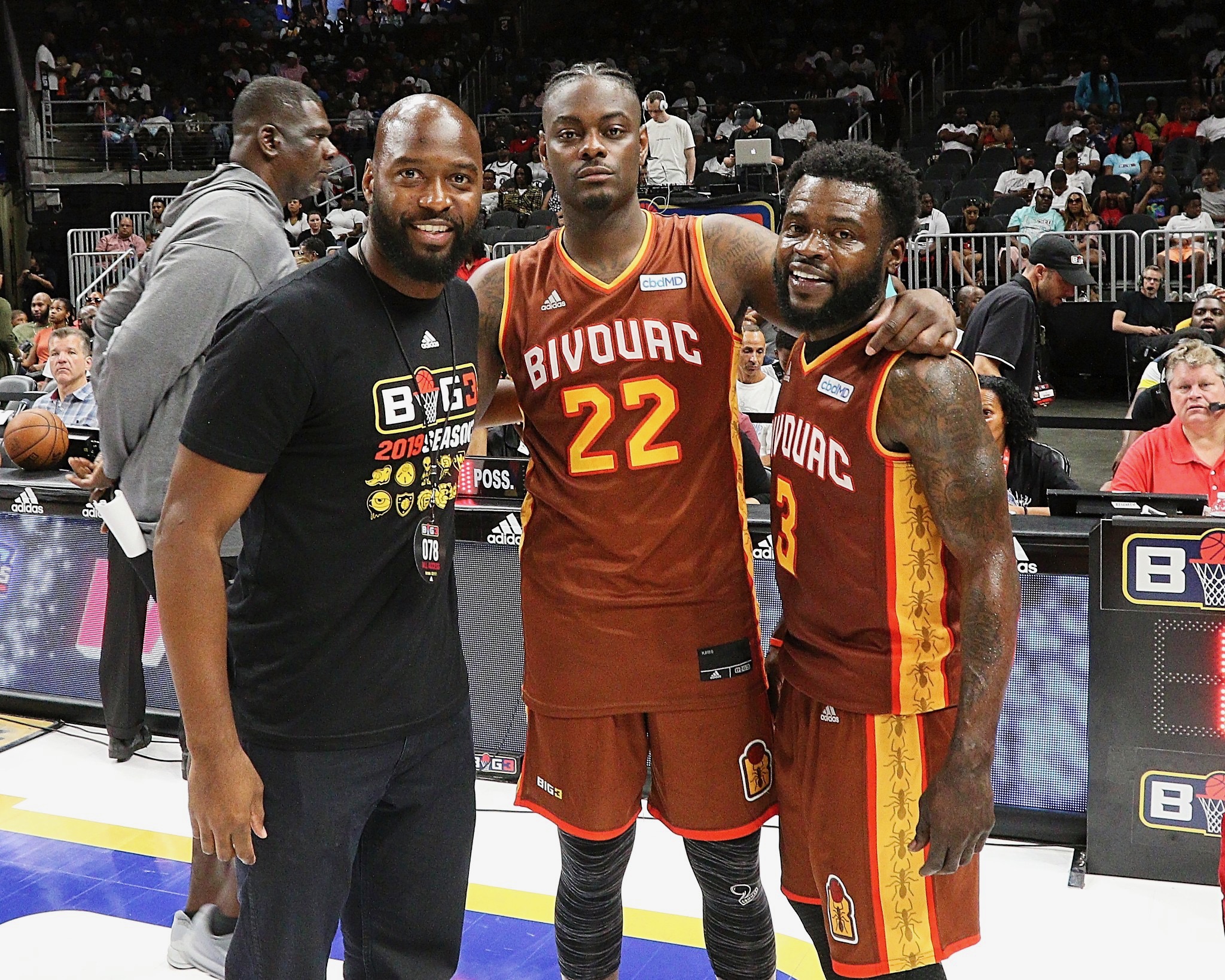 Mario West (left), a former Atlanta Hawk as well as a Yellow Jacket, is handling logistical operations for the Big3.

Smith dominated the first half, which clicks in when one team reaches 25 points. He was all over everything around the rim on the way to scoring 20 points (of his team’s 45).

As Triplets head coach Lisa Leslie said, “We changed some things at halftime; Iso-Joe, you know …“

The Big3 is different.

It works like this: Each weekend there are three games on Saturday and three on Sunday, and they’re generally close.

What matters most is that it’s high-level basketball, and it pays. And, for these former Jackets, it’s kind of local.

Former Jacket Mario West is the “player rep” for Bivouac, and he “takes care of logistics,” Morrow said.

Jarrett Jack, who was Bynum’s teammate in 2003-’05 and Morrow’s teammate for that last year, sat near the Bivouac bench. They all watched subsequent games while seated near each other.

Some of these guys may get another shot at the NBA.

He’s the leader of all, and it was interesting watching him wrestle with his former Hawks teammate, Josh Smith.

“It’s always like that. We both still live here in Atlanta, and we play pickup basketball together and games are exactly like that,” Johnson said. “It’s a lot of arguing.”

Bynum loves the Big3, even though Bivuoac fell to 1-2 in his adopted hometown. It seems a good situation, as players will partake in revenue sharing after the season – above and beyond their $10,000-per game contracts.

That’s probably not a surprise. Ice Cube left NWA – arguably the most successful rap music group ever – because he felt that the performers weren’t getting a big enough cut of the money. This is fun, yet it’s not the same as the NBA or playing overseas.

“It’s different. The competition is definitely top-level. It’s physical. It’s definitely different from five-on-five, but it’s growing and it’s great basketball,” Bynum said. “Basketball is a trillion dollar brand, and it’s continuing to grow, and I think it’s going to continue to grow.”