Clayton, a 6-2, 255-pound defensive lineman and Vienna, Ga. native, returns to Georgia after spending the past three seasons at Florida. He was a five-star prospect coming out of Dooly County H.S. in 2016.

Sims, a 6-3, 183-pound defensive back, returns to his hometown of Atlanta after redshirting as a true freshman at Michigan last fall. He was tabbed as a four-star prospect at Atlanta’s Westlake H.S.

Young is a 6-5, 215-pound defensive lineman/linebacker from Bentonville, Ark. He is listed as a three-star prospect coming out of Bentonville West H.S.

“We’re excited to welcome Antonneous, Myles and Kendall to The Flats,” Collins said. “They are elite student-athletes that will be great additions to our program.”

Clayton and Sims, as well as Miami (Fla.) transfer Marquez Ezzard, all enrolled at Georgia Tech this week. Young will arrive on campus with the rest of the Yellow Jackets’ incoming freshmen next month. 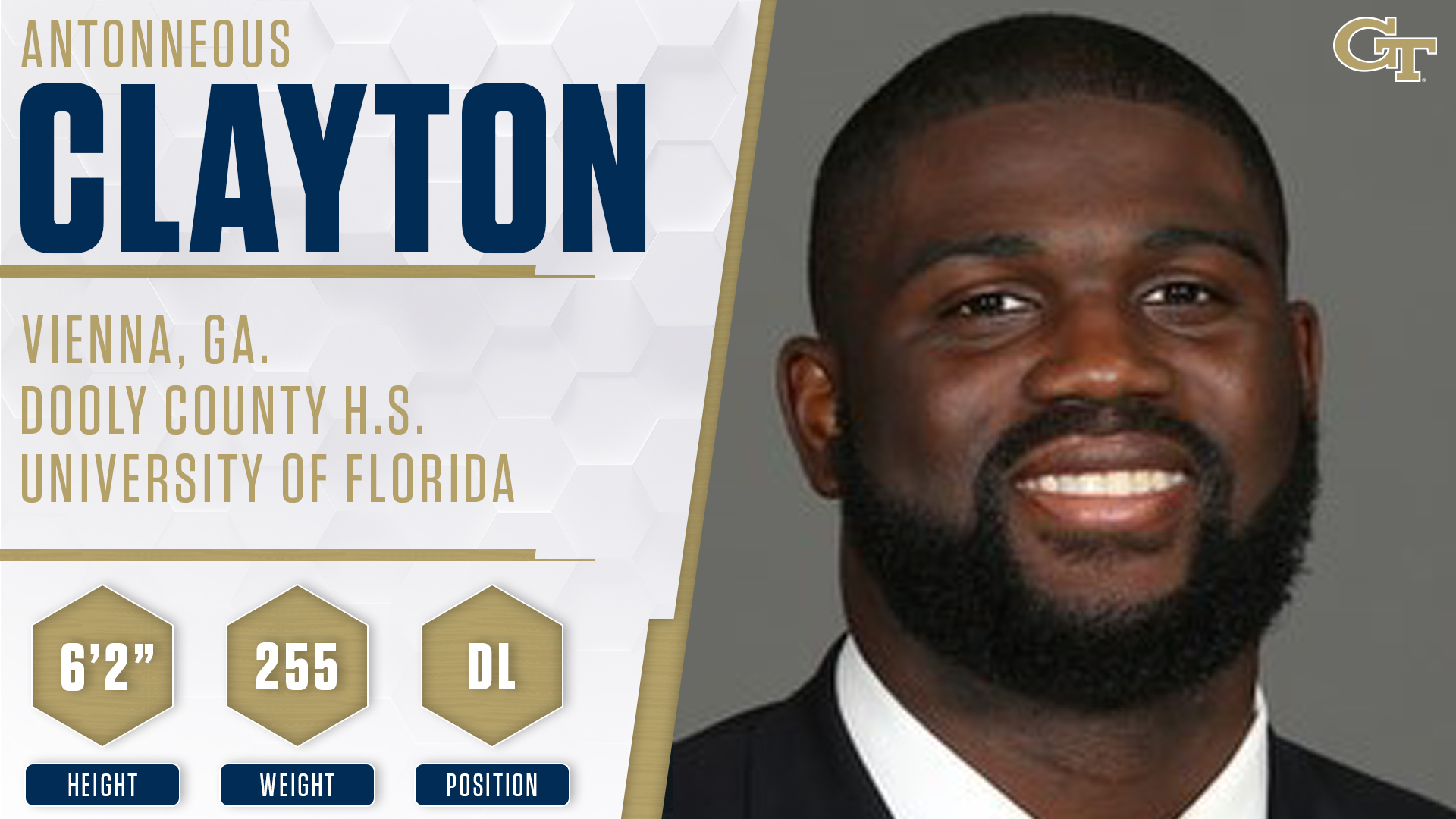 ANTONNEOUS CLAYTON (6-2, 255, DL, r-Jr., Vienna, Ga./Dooly County/Florida)
Spent the past three seasons at the University of Florida, where he was recruited by then-UF defensive coordinator and current Georgia Tech head coach Geoff Collins … Played in 17 games at Florida … Sustained a season-ending injury as a freshman in 2016 … Rated as a five-star prospect by Rivals coming out of Dooly County H.S. in Vienna, Ga. … Tabbed as the No. 27 overall player in the nation and the No. 2 defensive end in the class of 2016 by both Rivals and 247Sports … First-team all-state honoree … Recorded 77 tackles (68 solo), 27 tackles for loss, 13 quarterback hurries, nine sacks, a forced fumble and a fumble recovery as a senior at Dooly County … Selected to participate in 2016 Under Armour All-America Game … Coached at Dooly County by Jimmy Hughes.

MYLES SIMS (6-3, 183, DB, r-Fr., Atlanta, Ga./Westlake/Michigan)
Redshirted as a true freshman at the University of Michigan in 2018 … Rated as a four-star prospect by 247Sports, Rivals and ESPN coming out of Westlake H.S. … Tabbed as the No. 79 overall player in the nation and the No. 7 cornerback in the class of 2016 by Rivals … Two-time all-region honoree … Recorded six pass breakups and two interceptions as a senior despite opposing offenses generally avoiding to throw in his direction … Selected to participate in 2018 Under Armour All-America Game … Helped lead Westlake to 2017 regional championship … Coached at Westlake by Kareem Reid. 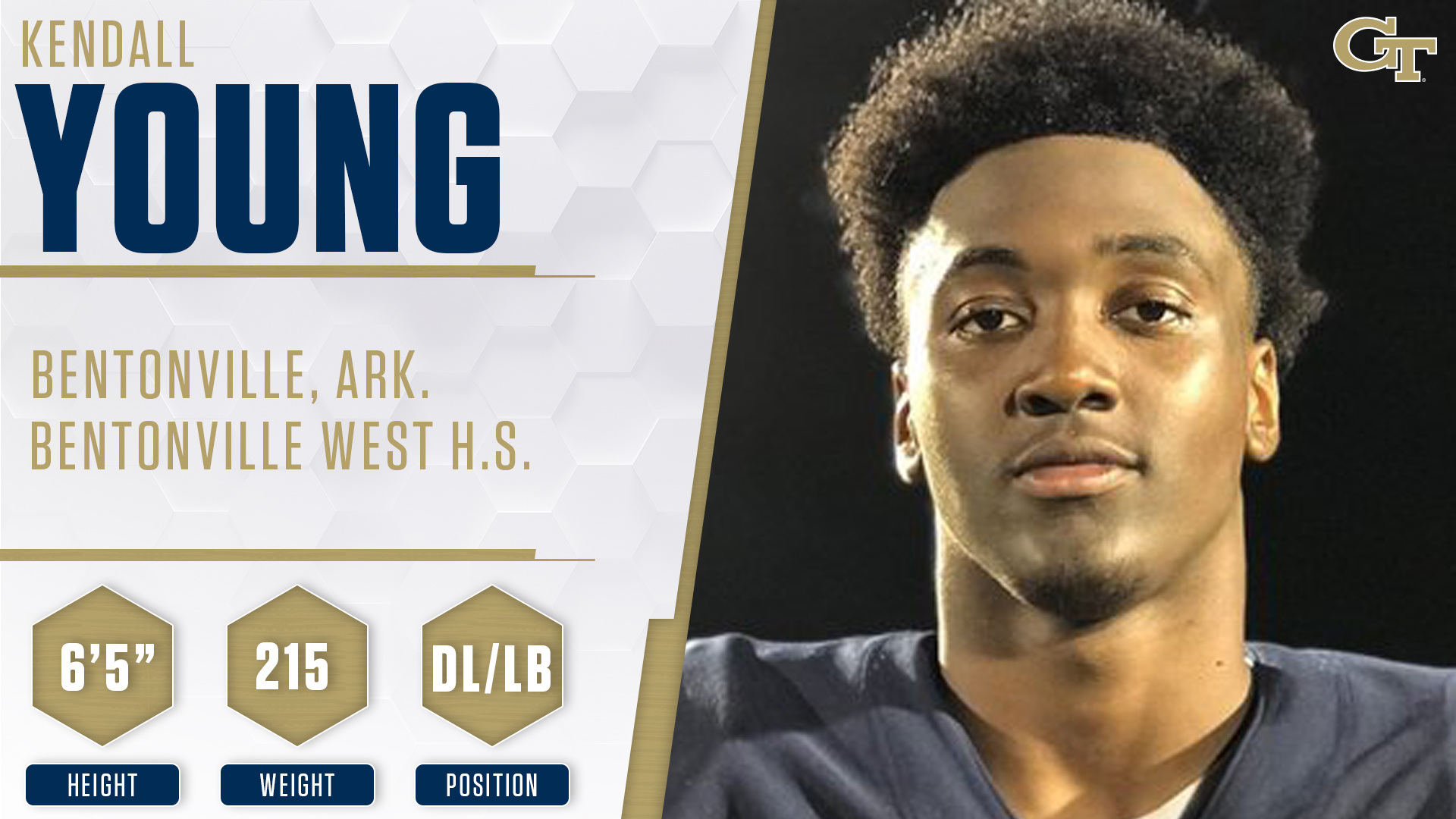 KENDALL YOUNG (6-5, 215, DL/LB, Fr., Bentonville, Ark./Bentonville West)
Rated as a three-star prospect by 247Sports and ESPN … All-state honoree … Racked up 185 tackles and 22 sacks over his final two seasons at Bentonville West H.S., including 100 tackles and nine sacks in just eight games as a senior … Helped lead team to a 7-5 overall record, including a 6-1 mark in conference play, and a berth in the Arkansas 7A state semifinals in 2018 … Coached by Bryan Pratt.

Thanks to the excitement surrounding new head coach Geoff Collins and the great value of 2019 season tickets (reserved seats for seven home games – including the regular-season finale vs. archrival Georgia – beginning at just $219 and Stinger Mobile Passes starting at just $149), Georgia Tech has already sold more season tickets than it did for all of 2018. For more information and to purchase season tickets online, visit ramblinwreck.com/footballtickets TODAY.