Is there such a thing as destiny?

Caio Pumputis makes a good case that there is.

Considering that his mom was a competitive swimmer and his dad played water polo, doing something in the water seemed to be the Sao Paulo, Brazil, native’s destiny.

Those roots certainly helped him choose swimming over soccer, even in what may be the latter sport’s hottest of hotbeds.

“It was really hard. All my friends used to play soccer, and I used to play soccer on Fridays, Saturdays and Sundays back home,” said the 21-year-old Pumputis, who further acted out as a youngster by idolizing Lionel Messi, an Argentinian. “We had (swim) meets at the same time as the soccer games, so I had to choose one. My dad was like, ‘Go to the swim meet, and if you do well, stay with swimming. If you don’t, you can come back to futbol.’”

It’s easy to guess how that meet went, as the pool topped the pitch from then on.

Still, narrowing down his sports options did not guarantee that greatness would follow.

What has gotten Pumputis to his current status as one of the most decorated swimmers in Georgia Tech history — with his senior year remaining — and one of the most promising young swimmers in the world, with dreams of competing for his native Brazil in the 2020 Olympics, is what’s inside.

“He’s a racer. He’s a competitor, and it doesn’t matter who’s up against him,” said Georgia Tech’s Toni M. and Richard L. Bergmark swimming and diving head coach Courtney Shealy Hart, a two-time Olympic champion. “Caio knows what he needs to do, and he takes care of business. It doesn’t matter what heat he’s in. I don’t think you can necessarily teach all that. That comes from within, and he brought that from day one.

“Caio is an elite athlete. He’s very naturally talented, but he works very hard, too,” Hart added. “I think one of the greatest attributes that he has when he races is, if he is anywhere near you the last 15 meters of a race, I have never seen somebody who just puts his head down and grinds it to the wall. He does not want to lose, and that is an awesome attribute to have.” 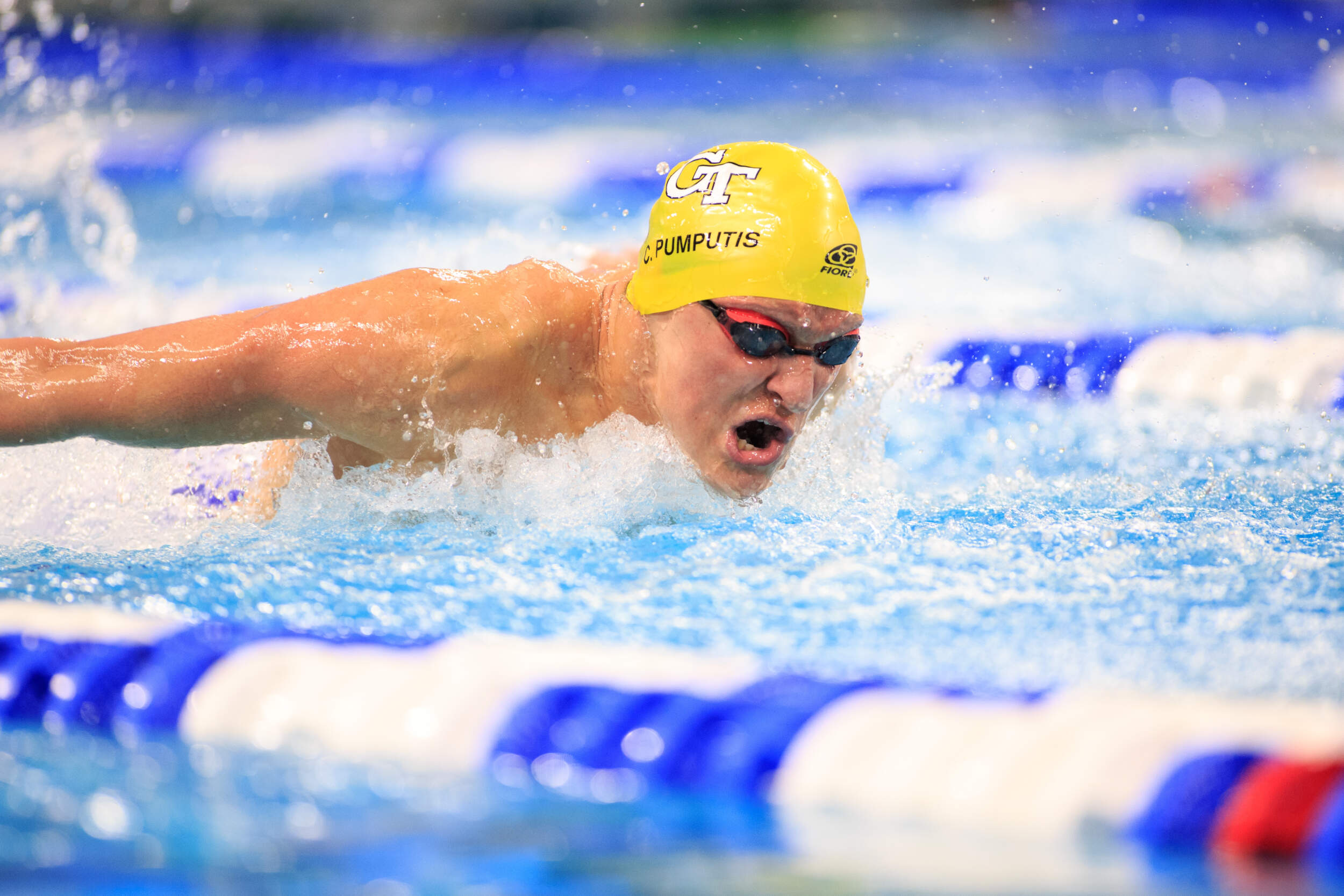 Junior Pumputis (above) has qualified for the NCAA Division I Swimming Championships each of the last two years.

“I don’t think I’ve ever seen an athlete that committed and that determined like him,” said first-year Tech assistant coach and countryman Francisco “Chico” Rego, who has trained more than a dozen world and national champions, including 2016 Olympic gold medalist Kevin Cordes and silver medalist Marcelo Chierighini. “He’s someone that you look at like, ‘That guy’s different.’ He’s not like your common student-athlete, or your common swimmer. In the water or in the weight room, he’s a beast.”

Pumputis gets into “beast mode” once he gets on the block and races fearlessly. A prime example came last Dec. 5 at the 2019 Toyota U.S. Open Championships at McAuley Aquatic Center, when he found himself sandwiched between U.S. Olympians Ryan Lochte, a six-time Olympic gold medalist, and Chase Kalisz, an Olympic silver medalist and two-time world champion, in his heat of the 200 individual medley.

He doesn’t back down against elite competition. He gets his back up.

“I like to race when people are faster than me, because it’s motivation,” said Pumputis, who finished eighth, but nearly topped his school record. “You know you’re not the best, and you know that you can push yourself, you can improve and get faster. So being in the heat with those guys was really important for me. I wasn’t intimidated at all. I just wanted to beat them. It didn’t happen, but I’ll try next time.”

Pumputis has used that approach to ascend ever since arriving in Atlanta.

Pumputis has plenty of motivation, starting with improving on last year’s NCAAs.

He’s as much a competitor in practice as he is in meets.

“He’s always trying to get to practice early to kind of stretch out and get ready to go,” said Hart. “He always stays after practice, whether that be to stretch or do pull-ups or even take an ice bath to help with his recovery. He is very mindful of what he needs to do outside of the water to help him be the best in the water.” 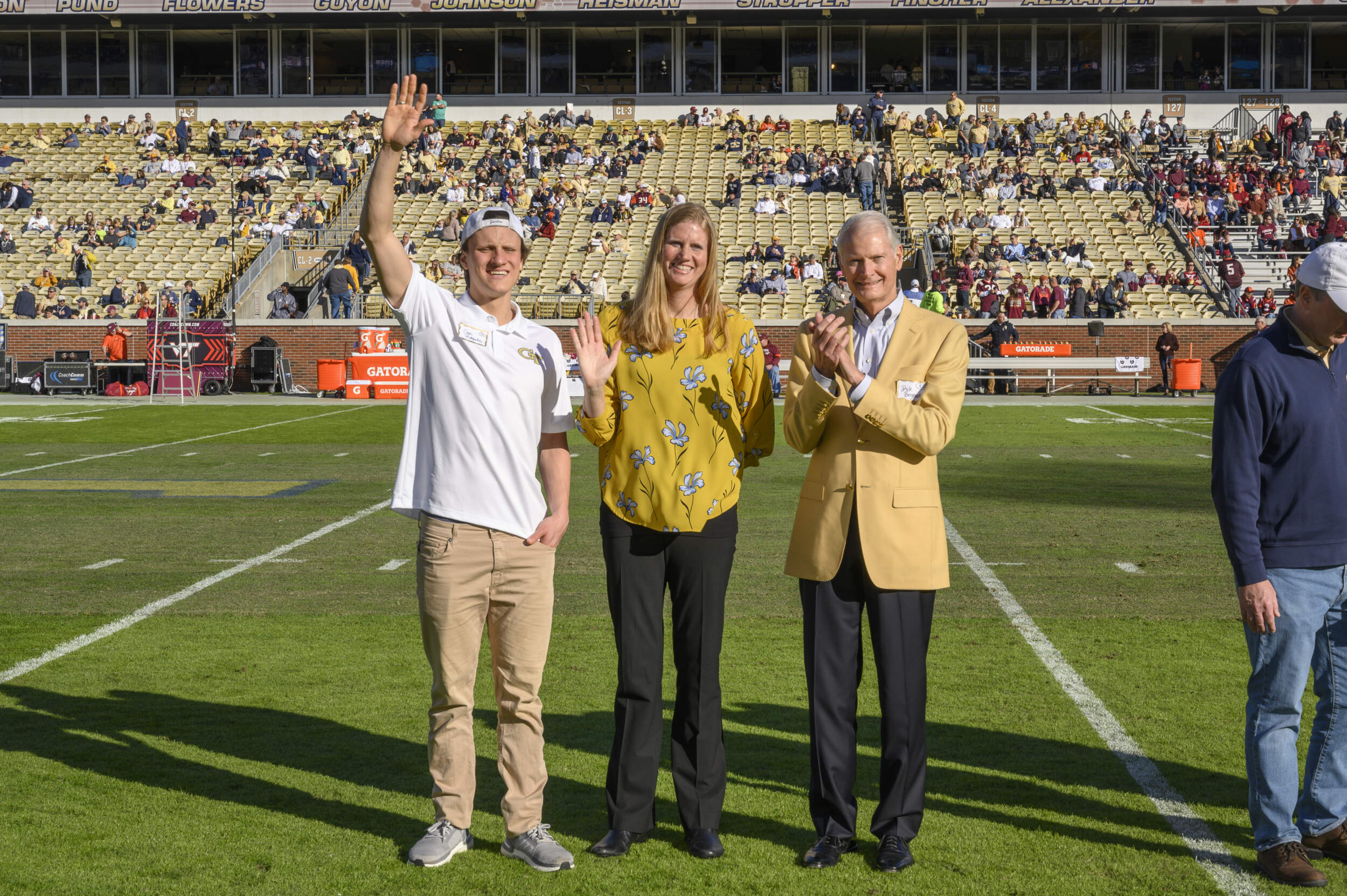 “I always heard he was a great kid, and that’s exactly what he is,” said Rego. He’s always super-positive. He came to me one day, and said to me, ‘I don’t care if you ask me to put my hand through a wall. I will do it. If it’s going to make me swim fast that’s what I’m going to do.’”

He believes that desire gives him an edge come race time.

“Sometimes I just think, ‘They haven’t practiced as hard as I did. They haven’t put in as much effort as I did the whole season, in and out of the pool,’” he said. “So sometimes I look to my side and I say, ‘I’m not going to lose this race.’”

He’ll take that confidence into the NCAA Championships, where he’ll try and bring home a championship, something not done by a Georgia Tech swimmer since 1927, when Dave Young won the 150 back. Pumputis badly wants to end that drought.

“We don’t even have this event anymore,” said Pumputis, with a laugh. “It’s going to be hard, but getting there is another chance. It’s who wants it most and I’ll be ready for it.”

At least one former Yellow Jackets’ great believes Pumputis can follow through.

“I think he has what it takes to win a title,” said Gal Nevo, a three-time Olympian, and five-time All-American, who finished second in the 400 IM at both 2009 and 2010 NCAAs, and whose 200 IM school-record Pumputis passed and whose 400 IM record Pumputis has put in jeopardy. “I want to see him win. I think Caio is in a very good period and I hope he continues this momentum into summer meets, international summer meets, and do even better things.”

He’s already shown he can compete on the international level, having competed at the 2017 Junior World Championships, breaking the South American record in the 100 medley (51.83) at the Brazil’s 2018 Jose Finkel Trophy tournament, finishing top 10 in the 200 meter medley and 100 medley at the 2018 FINA World Swimming Championships, and earning a silver in the men’s 200 meter and 11th in the men’s 200 meter breaststroke at the 2019 Pan Am Games, swimming through a severe groin injury. He also was part of Brazil’s men’s 200 IM at the ‘19 World Championships.

He hopes to take the next step for Brazil at the country’s Olympic Trials at the Maria Lenk Aquatic Center in Barra da Tijuca, April 20th-25th, then, hopefully the XXXII Olympic Games, July 25 through Aug. 6 in Tokyo, Japan.

Enter Coach Hart. She is determined to get Pumputis to Tokyo.

“Our ultimate goal for Caio this year is to make his Olympic team,” she said. “I think certainly Caio has the ability to be an Olympic champion as well. It is a matter of taking care of yourself both in and out of the pool and also a balance in your life, which is one of the reasons that Caio is in school right now. So it’s not a sole focus. It is part of the focus.

“I think he has what it takes,” Rego said. “There’s always something to be developed, of course, but it’s not something that he’s that far off from making the team. He has the mentality. His best events are further on in the competition. His third event is the most competitive, the one that he’s trying, is on the first day. He came to me and said, ‘I want to qualify on the first day,’ the event that people don’t think he’ll be able to make. That’s the kind of mentality that he has. Since the first day I was on campus and met him, the first thing we talked about was, ‘I’m going to make the Games.’”

What has so many people rooting for Pumputis is that he wants his teammates to succeed as much as he does. The legacy of being a great teammate is as important to him as the number of top-10s and records he will set.

“He will do whatever we ask of him in a meet situation so that we can win those meets,” said Hart, who used Pumputis in the 200 freestyle and backstroke and 100 butterfly this season. “He is super-humble and relishes the opportunity to be in school at Georgia Tech and to compete for Georgia Tech as we help him get to that next level. He’s a great teammate. He’s always hugging his teammates and trying to help them out. He’s just a great all-around guy. You want a team full of those.”

Setting that example is paramount, in and out of the pool.

“You put in hard work and show them that you’re not here just to play around, just to swim for two hours. You’re here to practice hard for two hours,” he said. “I think that’s the main thing.

“I would say (I have) responsibility to get the most out of practice, eat healthy, go to class, get rest, go to bed earlier,” he added. “You know it’s college. You have a lot of parties going on to distract you from your goal. I’ve learned. That I have to focus and be myself.”

Pumputis hasn’t considered his legacy. It’s not time to do that just yet. His focus is on those five rings.

“I think about that every day,” he said. “That’s my goal and that’s what I keep in mind. Mentalizing me getting there and being there, I think is really important. Once I get there I’ll do my best to make it happen.” 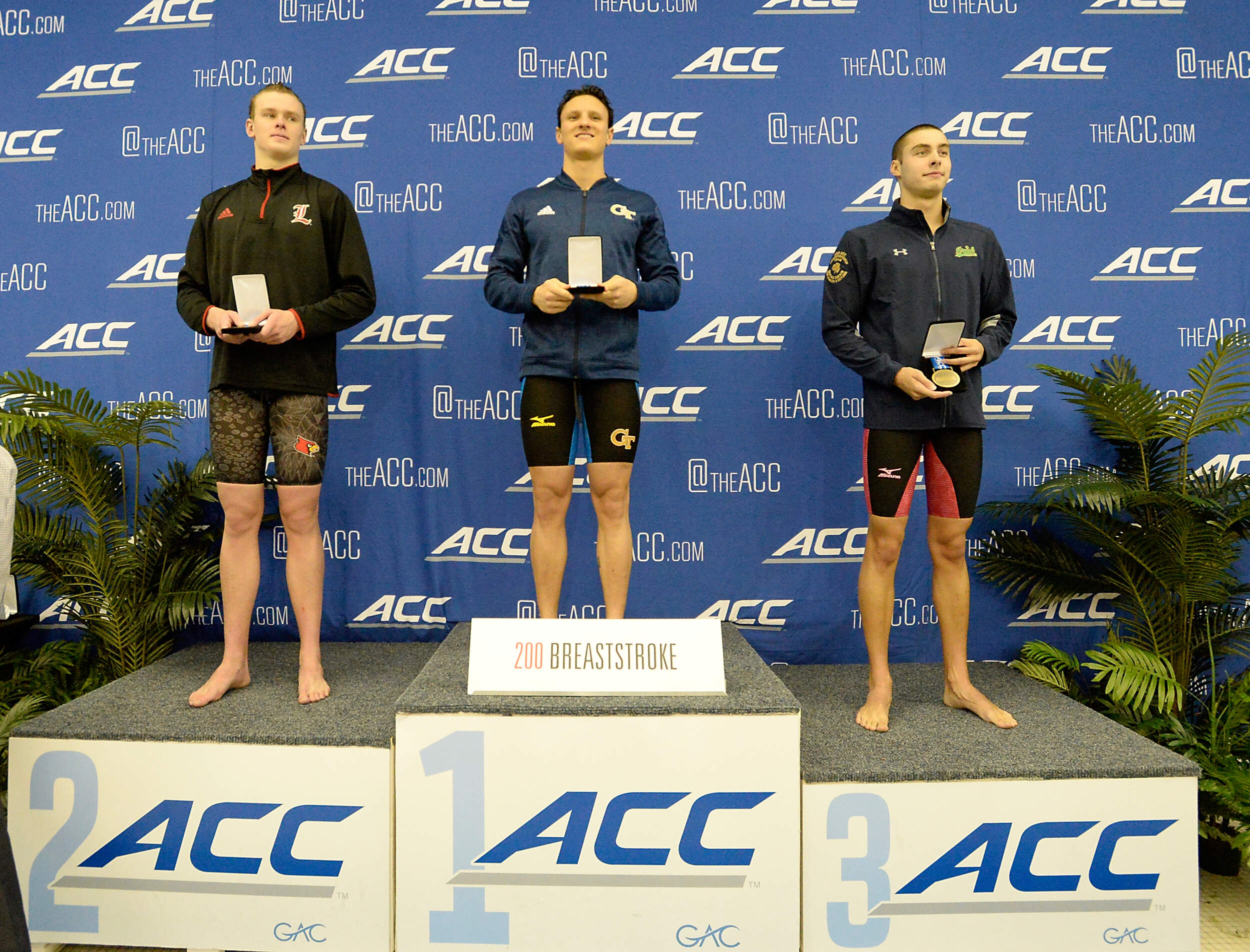 At the 2019 ACC Championships, Pumputis took gold in two events en route to being named the ACC Most Valuable Swimmer – becoming the second Yellow Jacket to earn the honor.