HOOVER, Al.- Georgia Tech’s cross-country program closed out the 2020 regular season with a second-place women’s and fifth-place men’s finish at the UAB Blazer Classic in Hoover on Friday morning at Veterans Park. Results for both races can be found here.

Senior runner Nicole Fegans led the way for the Yellow Jacket women as she earned a sixth-place overall finish in the 6K clocking in at 20:24. The Tech women scored 104 points, with Arkansas being the only squad to finish ahead of the Jackets at 42 points. ACC-rival Florida State earned a third-place spot on the team leaderboard, scoring 115, making this the second meet this year the Yellow Jacket women edged out the Seminoles. Ole Miss (4th, 118), Tennessee (5th, 121), Kentucky (6th, 126), Middle Tennessee State (7th, 167), Vanderbilt (8th, 221), Florida (9th, 224) and Mississippi State (10th, 235) rounded out the rest of the women’s field scoring.

“It’s a great day to be a Yellow Jacket as both teams finished the regular season with a bang,” said head men’s & women’s cross-country coach Alan Drosky. “Today was a lot of fun. We are so proud of how the teams have handled this fall. COVID has been interesting for our sport. We’ve had a regional schedule, competing against mostly ACC and SEC teams, with a few other mid-major schools who compete very well in our sport.”

“Every meet has been smaller than usual, limited to ten teams per race due to COVID protocols, but the competition has been very tough.  We’ve lined up three times and have has some great results.  Today was outstanding.  We’re excited about the upcoming championship, but we also want to stay present and enjoy the moment.”

Fegans held strong with the front of the pack throughout the entire race. By the 3K mark she found herself in the top-six, never looking back as she secured her second top-six finish of the regular season. Earlier this year she took first-place overall at the Mountain Dew Invite in Gainesville. She was the second ACC runner to cross the line, with FSU’s Addison Coggins ending as the only other ACC runner is front of her. 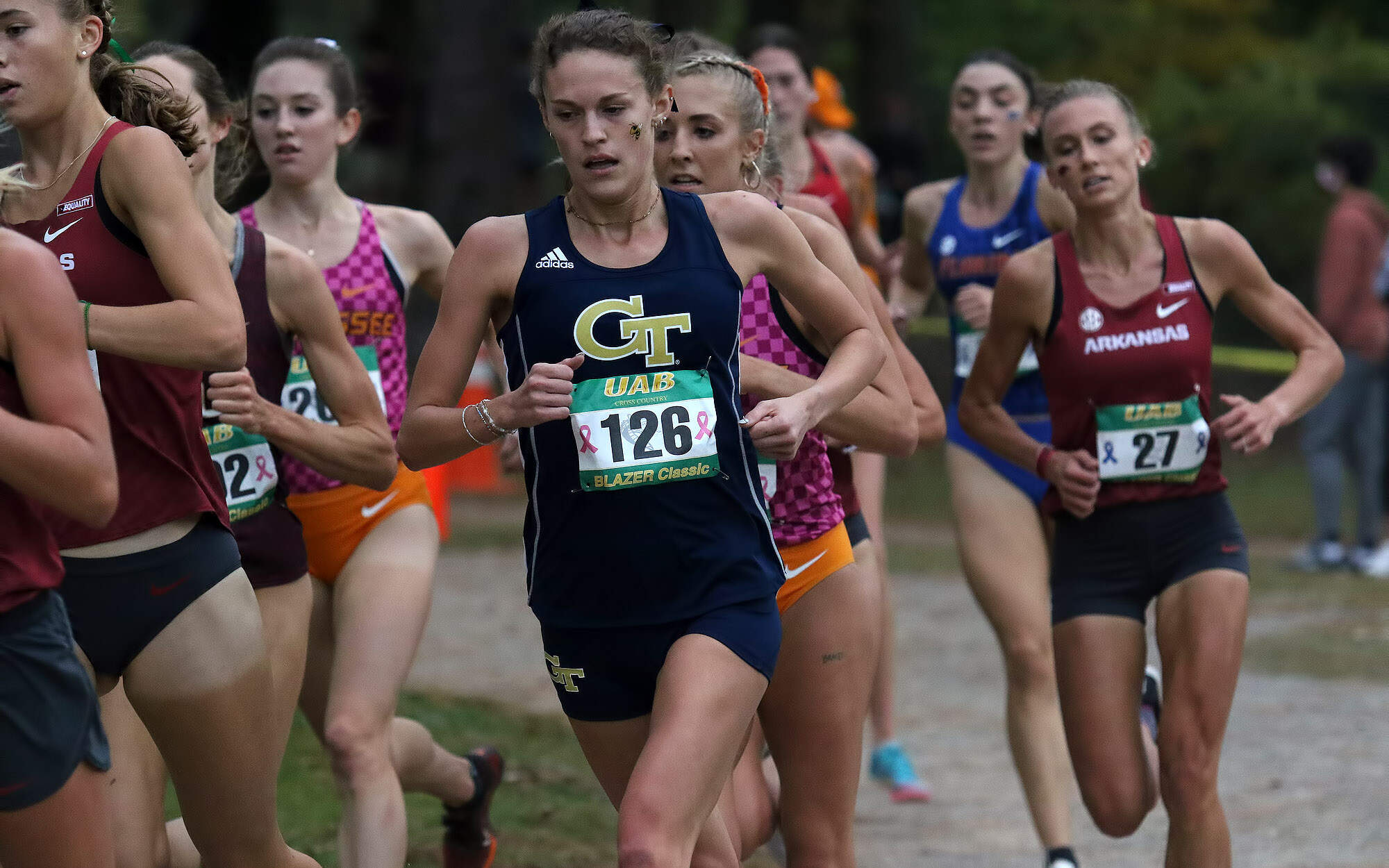 “Today we really went out and showed what we are capable of,” said Fegans. “The field was deep, but we stuck together and pushed till the end. We still have a lot left in the tank and we can’t wait for ACC’s.”

The middle of the pack for the Tech women held their own yet again in an extremely talented field. Junior Mary Kathryn Knott (21st, 20:57, 21 points), sophomore Claire Moritz (23rd, 20:58, 22 points) and junior Liz Galarza (25th, 21:01, 24 points) combined to move up 51 spots from midway point at 3K to the end of the race. The trio found themselves collectively around the 40th-place spot midway through the race, showing yet again that the Yellow Jacket women do their best running during the second half of competition.

In all three regular season meets this year the Tech women have finished each race in the top-three as a squad. The Jackets took first at the Mountain Dew Invite and third at the FSU Invite prior to Friday’s race. 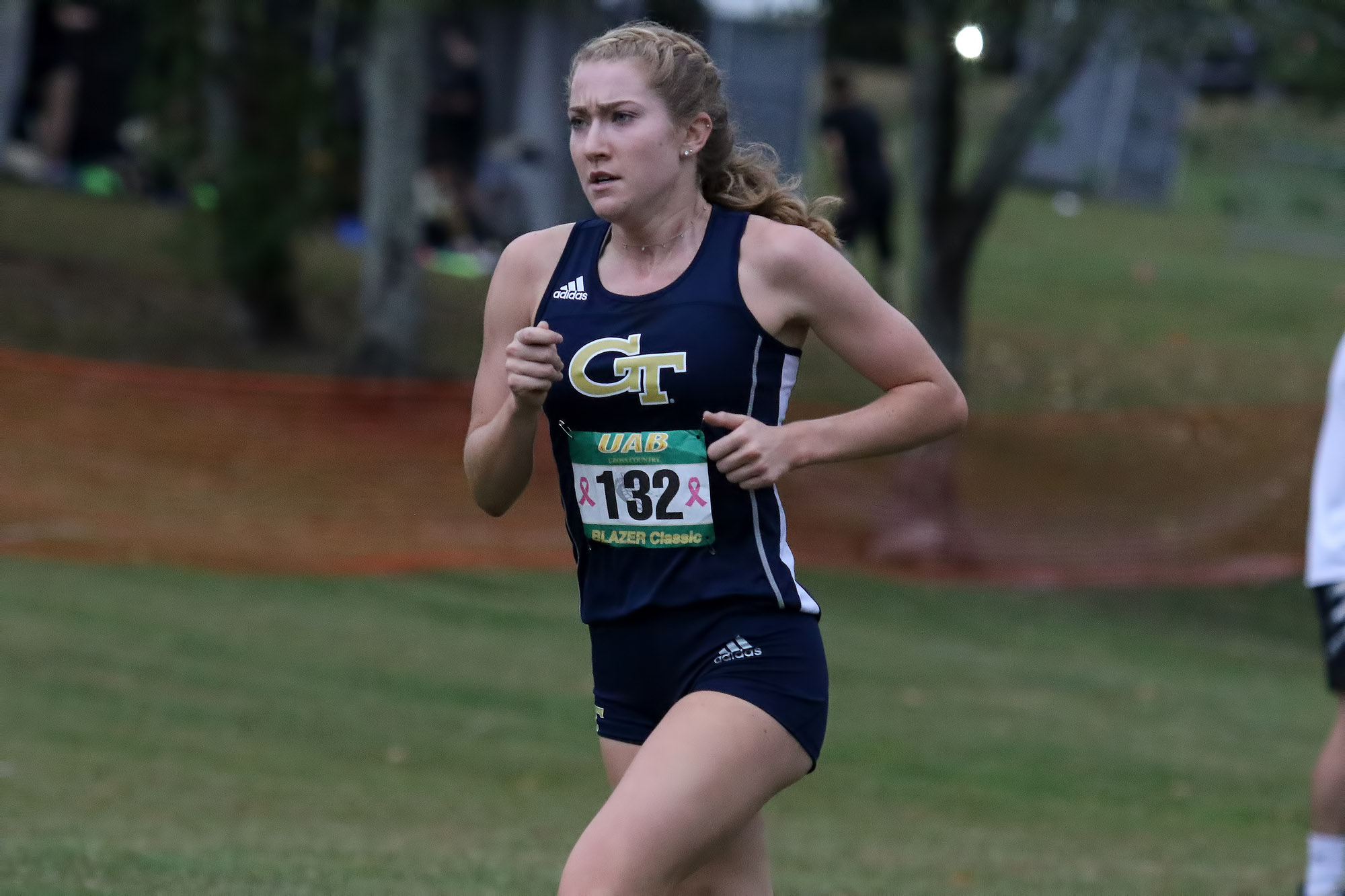 “The women are running so well right now,” Drosky added. “Obviously taking second-place in this kind of a field reflects that. But if you dig into the results more you can see how impressive they were. They positioned themselves early in the race much better than our last time out, but also still had a tremendous second half. They ran down some very strong teams.”

“The race for the men was similar to the women in that they got out well and were moving up the entire competition,” said Drosky. “They just couldn’t quite get as close to the front teams. However, do not be fooled by the fifth-place finish. The men are very good and competed very well today. They are getting better every time out. To average 24:32 for the top five is really good and gives you an idea of how deep this field was.”

The Blazer Classic was the second straight meet that Kent was the Yellow Jacket men’s first finisher. 10 of Tech’s 14 listed runners finished with a time of 25:00 or faster. 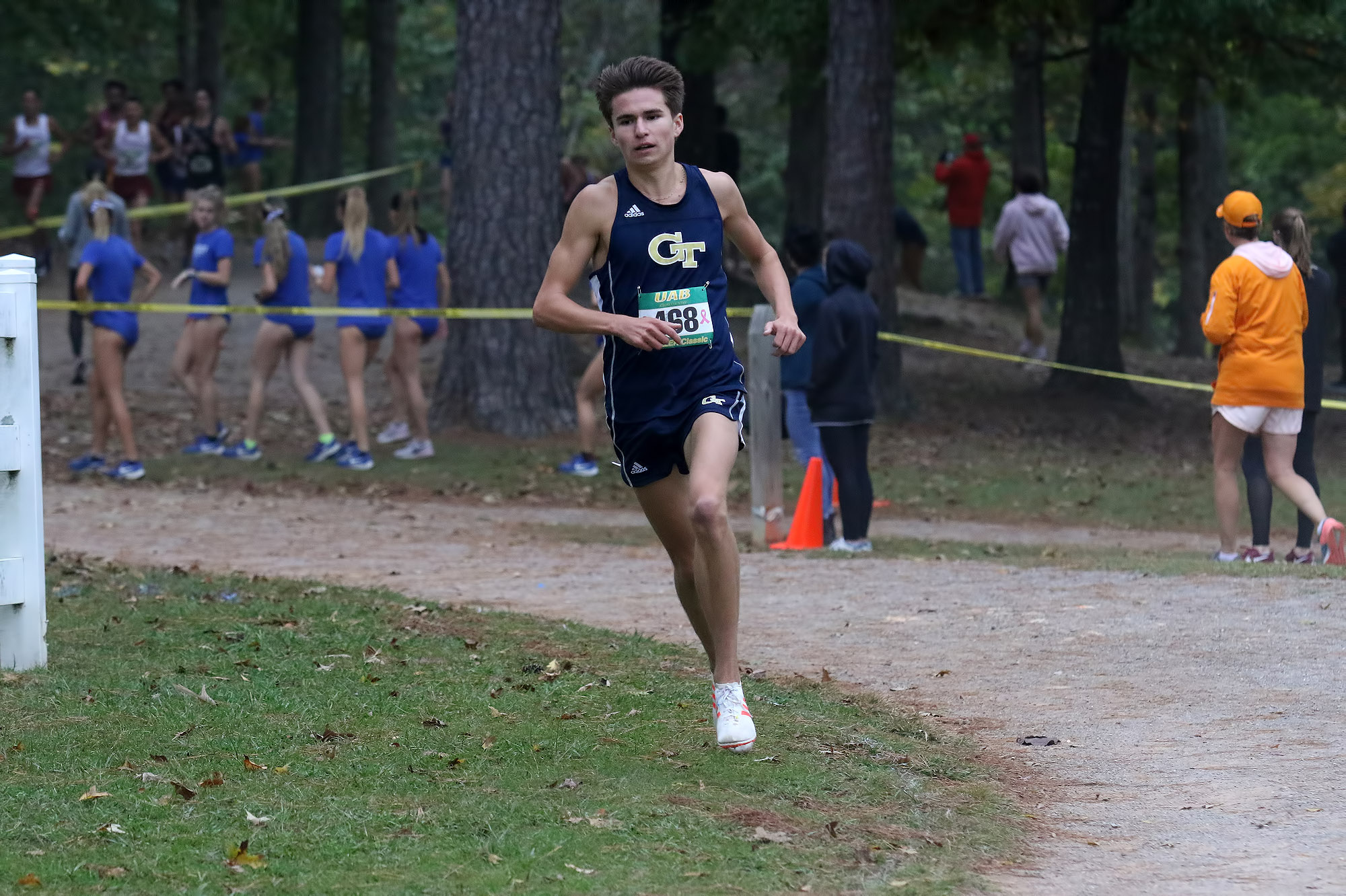 “Having 10 guys run at that rate is incredible,” said Kent. “We were very excited about our team after this race. We always run our best race at the last race, so we can still think bigger and stay hungry looking ahead to ACCs.”

“It is really exciting to be part of such a competitive freshman class,” added Wade. “I have had this amazing opportunity to race in the same jersey as many of my past high school competitors. I feel like we are continuing to build something really great at Tech.” 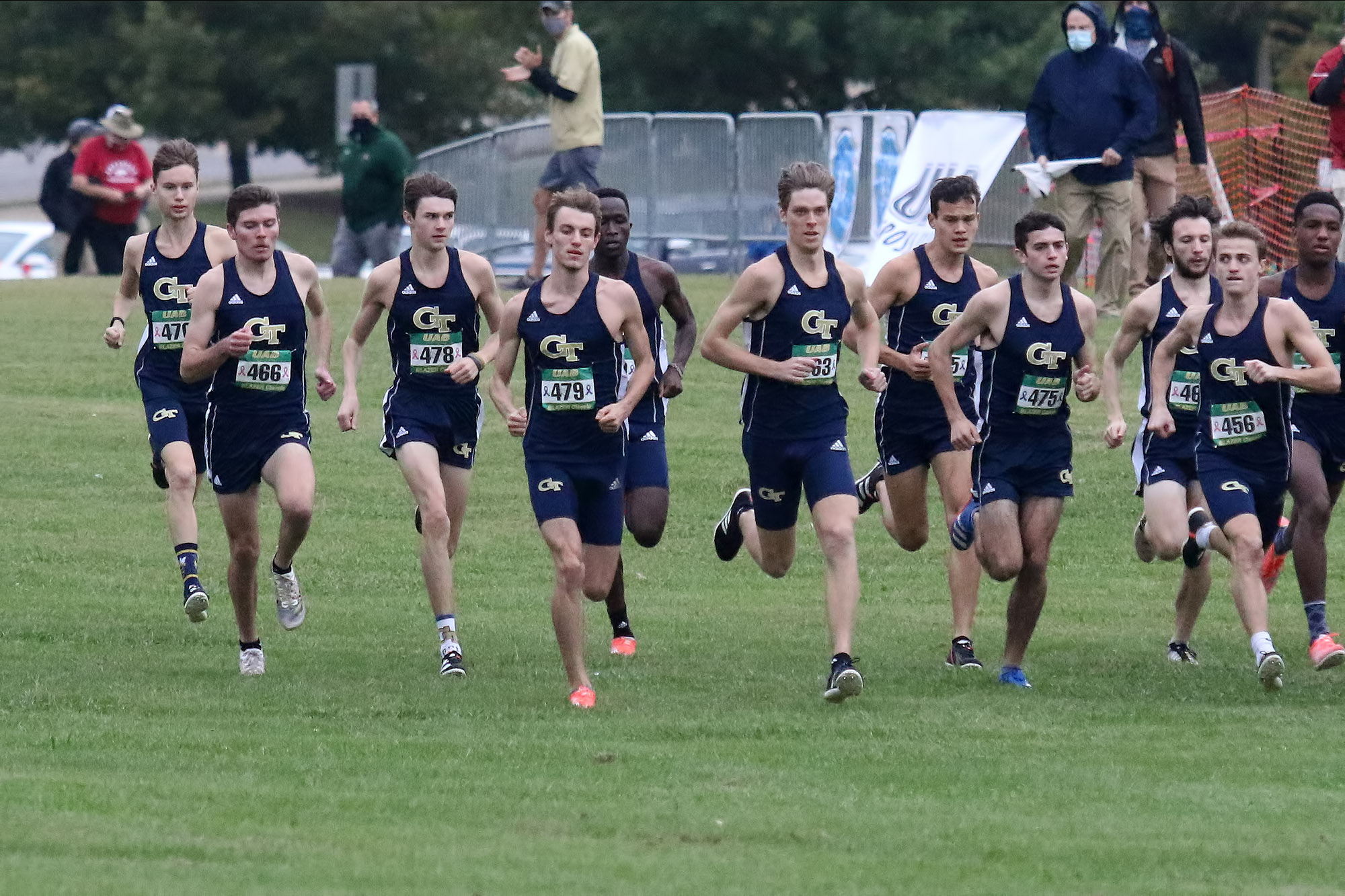 The Men’s 8K Open race gave the Jackets a chance to see the majority of the rest of their roster that did not compete in the premiere Men’s 8K Green race. As a team the Jackets finished in first-place at 44 points. Western Kentucky (2nd, 51), Auburn Montgomery (3rd, 67), Valdosta State (4th, 90), Point University (5th, 139) and Florida Atlantic (6th, 143) all finished behind Tech on the team leaderboard in the 8K Open.

“We saw some great competition and we see that we can compete with some of the better teams in the country,” Drosky concluded. “The women and the men have strong front runners and also have great depth. You need both to compete at the highest levels. Lastly, from top to bottom, we are getting better.”

Tech will lace it up again on Oct. 30 when the Yellow Jackets head to Cary, N.C., for the 2020 Atlantic Coast Conference XC Championships at WakeMed Park. With ACC Championships up next Tech enters the meet with an experienced and tested roster. In 2019 the Georgia Tech men placed 9th, with the women taking 10th. Over the course of the 2020 regular season both the men’s & women’s squads have shown that when the middle of the lineup performs well the Jackets are a force to be reckoned with.