*This article was originally published by USA Basketball on usab.com and written by Maggie Hendricks ahead of the USA Basketball Women in the Game Conference held in Atlanta, Oct. 12-13, 2019. A link to the original article can be found here.

Now that she is back coaching basketball after seven years as an analyst for ESPN, Nell Fortner is getting used to recruiting again, and all the things that come along with it. Even during the course of this interview, Fortner had to duck out to take a call from a recruit. The clock never stops.

Fortner was hired to lead the Georgia Institute of Technology’s women’s basketball program in April. She previously had served as head coach of the 1999-2000 USA Basketball Women’s National Team, and the gold medal winning 1998 USA World Championship and 2000 Olympic teams. Fortner, who also was head coach of the WNBA Indiana Fever, and a collegiate head mentor at Auburn University and Purdue University, found herself missing the sidelines.

“Once you’re a coach, it doesn’t just leave you,” said Fortner, 60. “I felt like I still had the energy to do it, because it does take a lot of energy. I had been watching it, talking about it long enough, that I was ready to get back in and coach. I told myself if the right job came up, then I would be interested in it. I didn’t know if anyone would hire me at this point, because I’d been out for a while. But then Georgia Tech opened up, it was the right fit. So, here I am.”

During her time at ESPN, Fortner found herself in the position where she continually could learn about basketball from some of the sport’s most successful coaches. Though she hasn’t coached since 2013, Fortner has had the chance to improve her basketball knowledge. Now, she gets to put that knowledge to work in working with her new team.

“I was able to watch a lot of practices over the years, to hear coaches teach things in a variety of ways, there’s not just one way to be a successful basketball coach,” she said. “There’s many ways to get players to be their best. There’s many ways to play defensive schemes, and teach the game of basketball. So to be able to hear from different coaches along the line, very high level coaches, I loved it. I loved listening to it. Took notes. Continued to go to clinics to keep up with where the game was headed, where the changes were. I was fortunate to have time to do all that, and to have to doorways to walk into.” 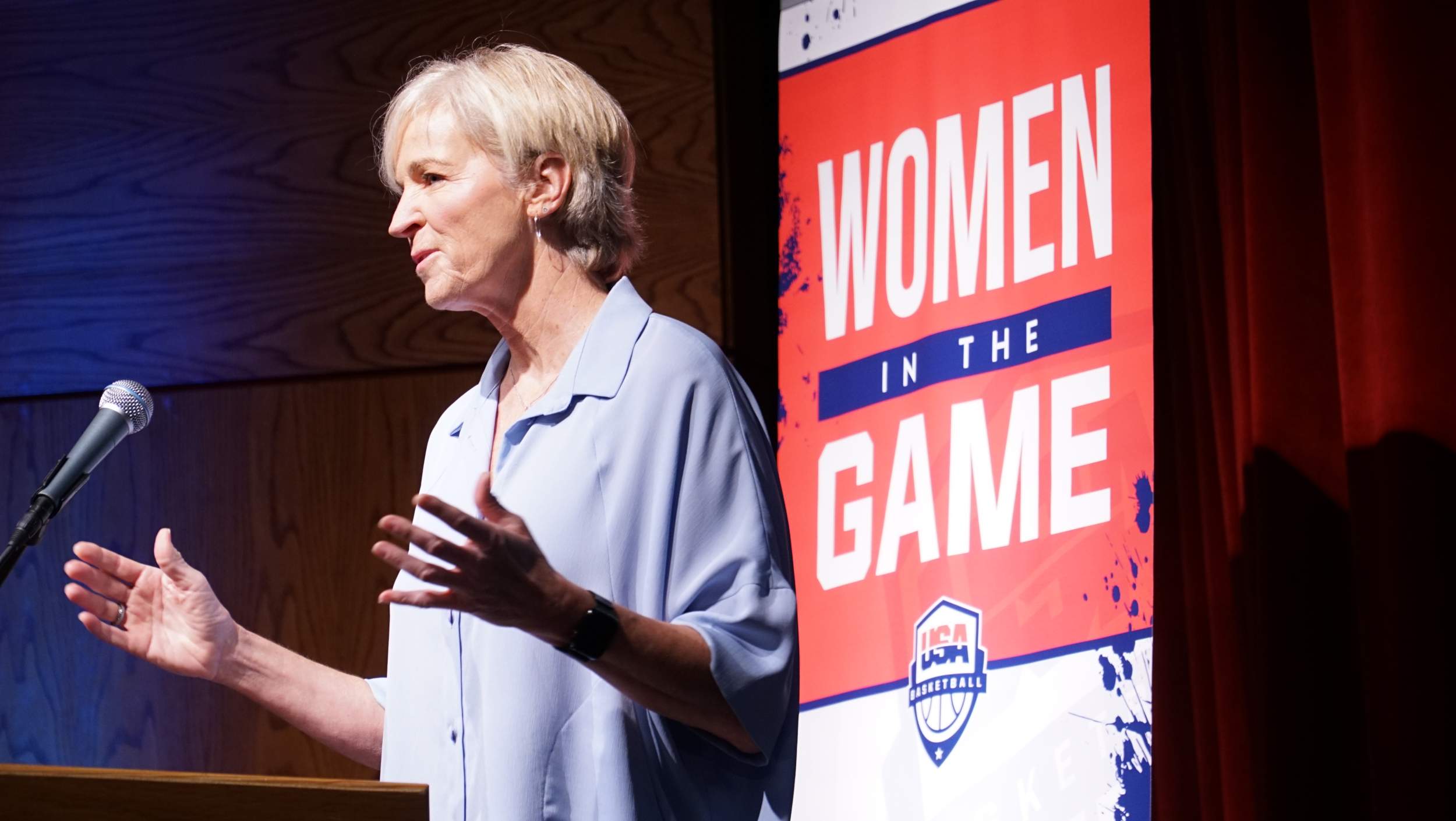 Fortner is joining forces with several women who work in athletics as a part of USA Basketball Women in the Game conference that is taking place this weekend in Atlanta, with the support of the Atlanta Hawks. The event will expose attendees to the different avenues women can take with sports careers, give practical advice and help attendees find mentors. Fortner said she is taking part to give back to the sport that has given her so much.

“To mentor young people, to be a source of information, a source of inspiration for someone young, it’s important. It’s what everyone should do. You reach back and take a hand, and you help them up,” she said.

One of the more nerve-wracking parts of any conference is networking. Fortner recommends working through nerves to talk to powerful people in your career field, because you never know where a connection is going to take you.

“It’s hard for a young person to walk up to someone whose been successful,” she said. “’They don’t want to talk to me! I’m nervous!’ You’ve got to do it. It’s incredibly important. I’ll never forget the first time I met Pat Summitt. I was so nervous I could hardly talk to her. She turned out to be one of my best friends. You never know what direction something’s going to turn. You can’t be afraid of it.”

Inspiring young people and helping them find their way in their crucial collegiate years is one of the reasons Fortner wanted to get back into coaching.

“The reason I coached in the first place was for the kids,” she said. “I really enjoy coaching and teaching. I enjoy making a difference in a kid’s life, off the floor as well as on the floor. I really missed being around them, and having a team of my own and being a part of a team. That part never leaves you.”

Born in Jackson, Mississippi, Fortner played volleyball and basketball at the University of Texas, and took her first coaching job at Killeen High School in Texas in 1983. Over the years, she has coached successfully at multiple levels all over the country, including as an assistant coach with the historic 1995-96 USA Women’s National Team and helping the 1996 U.S. Olympic Team bring home the gold medal. She has found one constant over her decades of coaching.

“Players are players, kids are kids, and nothing has changed in that regard,” she said. “The one thing I’ve heard over the years is that kids are different. No, they’re not. Kids are the same. The world is different, but the kids are the same. They still need a lot of guidance. They need mentoring, they need teaching, they need discipline. They need everything they’ve always needed in helping them mature in that age range. That is the absolute same.”