THE FLATS – Georgia Tech swimming and diving split to open their two-meet homestand as the men’s team won a thriller over South Carolina and the women fell in their meet at the McAuley Aquatic Center on Saturday afternoon.

“Really proud of the energy that the team brought today,” head coach Courtney Shealy Hart said. “Our eyes are still set on championships season so for us to swim faster than we did against Auburn a few weeks ago, that shows we’re going in the right direction. We’ve still got some work to do, but we’re doing the right things. Overall, I’m proud of the men’s team for their fight today to get the win and proud of the women for battling the entire meet without let-up.”

The Jackets will conclude the homestand when they host Denver on Jan. 25-26. Tech will hold their Faculty Appreciation Day on Friday, Jan. 25 for the 3 p.m. start, while Saturday will feature Senior Day festivities prior to the 11 a.m. start.

Needing a win and another top-3 finish to win the meet, it all came down to the final relay – the 400 free relay. The Yellow Jackets took advantage of a great first jump and Tech’s squad of Rodrigo Correia, Austin Daniel, Caio Pumputis and Darren Lim won with a time of 2:58.79. GT’s team of Albert Zhi, Clay Hering, Aidan Pastel and Colt Williamson finished third at 3:04.19 to secure the win.

🔊 Clay Hering talks the thrilling win back at home on The Flats pic.twitter.com/Vz9MNwS8hC

The Yellow Jackets would take both relays on the day, also winning the opening relay – 200 medley relay – as Correia, Zhi, Pumputis and Corben Miles turned in a winning time of 1:28.74. Also finishing atop the podium was freshman Kyle Barone, who swam a tough 49.20 to win the 100 back. Also scoring for Tech in the event was Williamson (third – 50.43) and Daniel (fifth – 51.74). 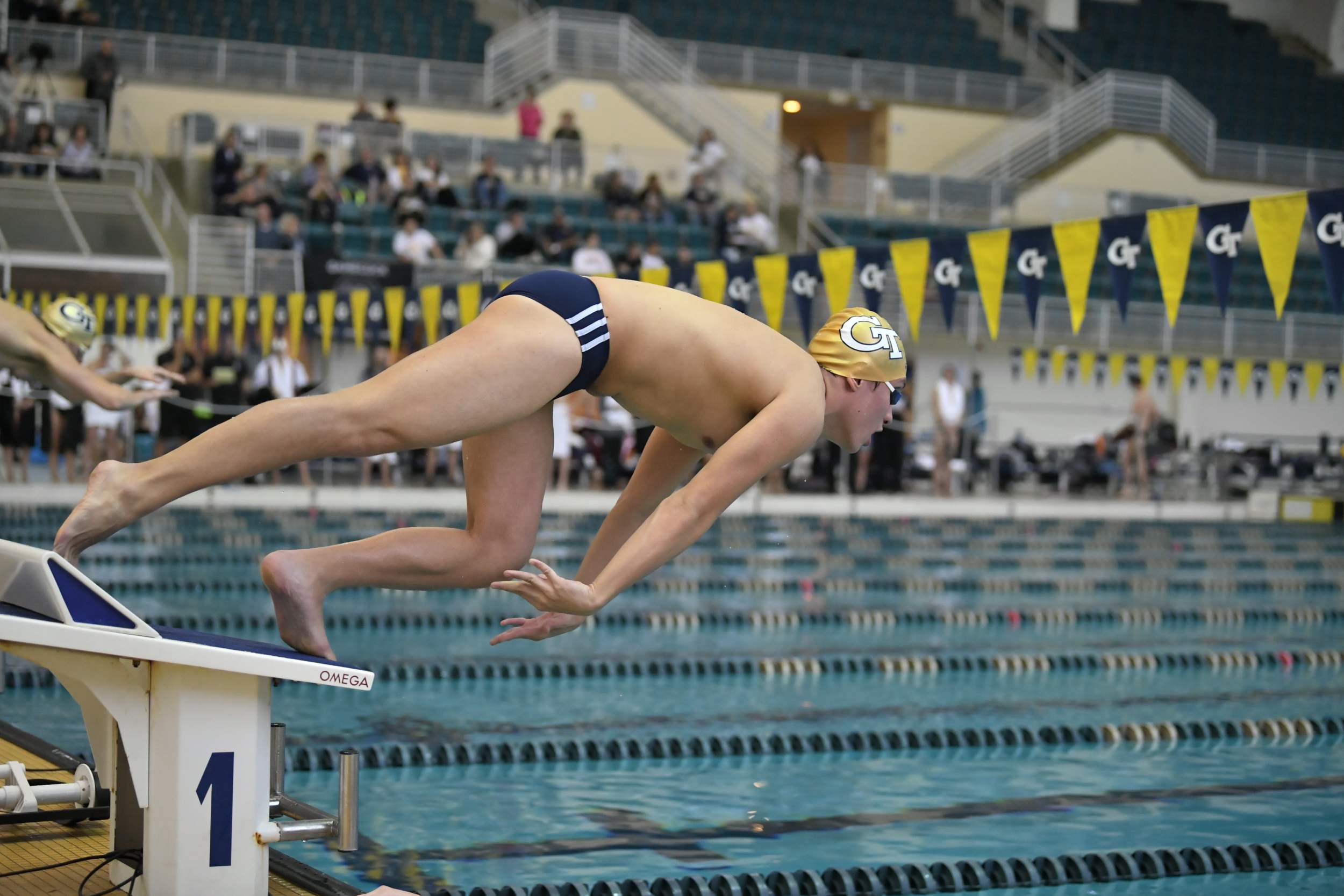 Tech’s highlight of the day came on the diving boards where Camryn Hidalgo swept the 3-meter and 1-meter events in an impressive showing. In the 3-meter, Hidalgo recorded a final score of 341.33 before tallying a 1-meter total of 298.73. Caroline Doi also scored an even 300.00 for fourth in the 3-meter before finishing fifth in the 1-meter with 252.83 points.

Also winning her event in the pool was senior Iris Wang, who turned in a time of 1:50.14 to win the 200 free. Kristen Hepler also scored in the event with a career-best performance, finishing fifth (1:53.57). Wang then finished second in the 100 free, getting edged out by .03 seconds on a 50.74 finish. Right behind her in the event was Celine Nugent, who finished fourth with a 52.29

Tech swimming opened the day in the 200 medley relay with a second-place finish by the squad of Allie Paschal, Nicole Williams, Chloe Miller and Wang. Then in the 100 back, senior Sara Gilbert finished second by swimming a 57.32 before Grace Mauldin scored from fourth (57.62). 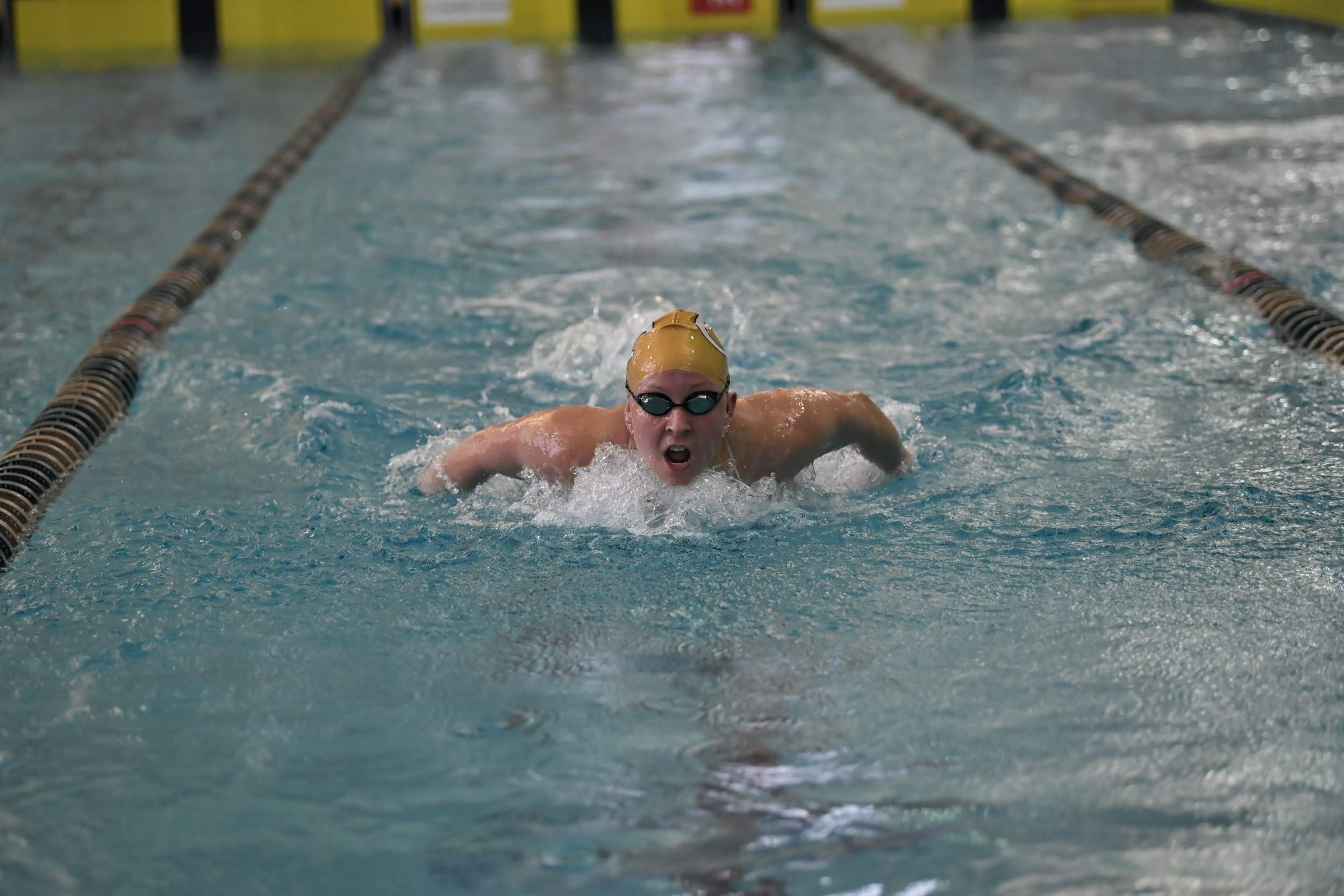