The Birth of Georgia Tech Basketball

Georgia Tech made its intercollegiate basketball debut on Feb. 17, 1906 when, after playing several games in a local amateur league, a matchup was arranged between the Georgia School of Technology, as the Institute was known then, and Auburn University.

The site of the contest was the Peachtree Auditorium and according to the Atlanta Constitution, “a large crowd was present in the auditorium to witness the first struggle between college teams for the supremacy of basketball tossing.”

Auburn, under coach Mike Donahue, entered the game as the favorite after beating the Atlanta Athletic Club, 27-18, a week earlier. Tech, on the other hand, had played together only in the Atlanta Basketball League, a circuit in which team members competed to stay in shape for the football and baseball seasons. The lineup for the Yellow Jackets featured the team’s captain, Wert, at left forward, Baker at right forward, Sutcliff at left guard and Fosterling at right guard. The center was 6-2 Ed Lafitte, who would go on to pitch professionally for the Detroit Tigers.

The experience of the Auburn team proved to be the difference as The Constitution reported, “In the first 20 minutes of play, Tech made the game interesting for the team from Alabama, but even with the advantage of knowledge of the floor, could not score more than half the points scored by the visitors, this period of playing ending 12 to 6 for Auburn.

“In the second half, Auburn had everything her own way. Tech was unable to score and confined her efforts to limit the points made by their opponents. Auburn scored 14 points making the final 26 to 6.”

Baker led Tech in scoring in that first game as he tossed in a pair of field goals while Wert had two points on two free throws. Lafitte was held scoreless, while the guards in that era were strictly defenders.

Despite that initial setback, Tech scheduled two more games that season, both against the University of Georgia, another newcomer to the sport. The Yellow Jackets were victorious in both games against their arch-rival, winning on Mar. 10 in Athens by the score of 27-13, then capturing the return engagement two weeks later, 12-11, in an overtime game at the Peachtree Auditorium. 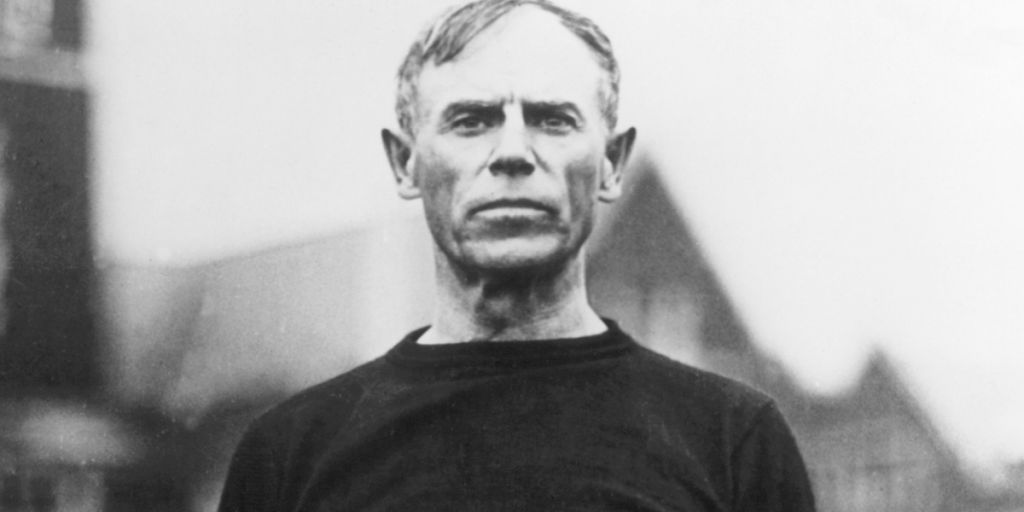 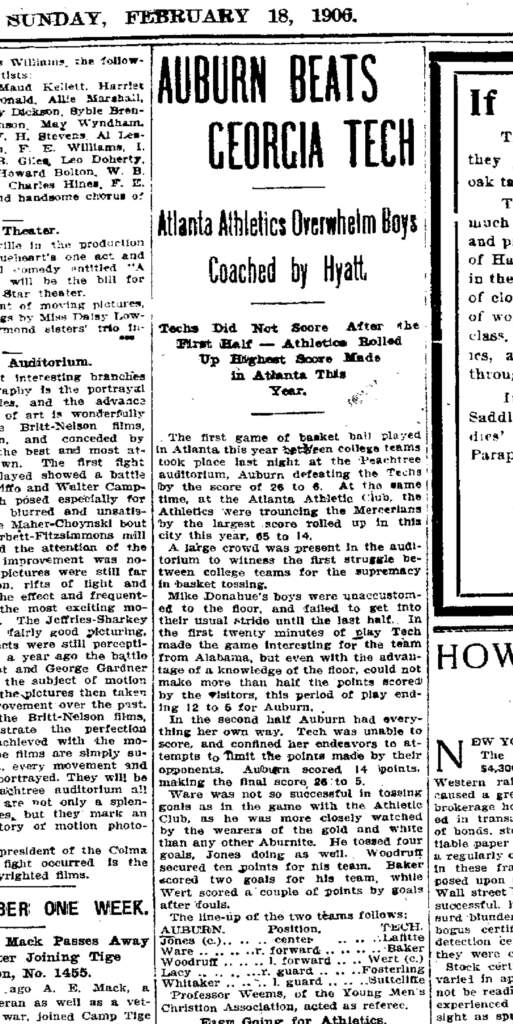 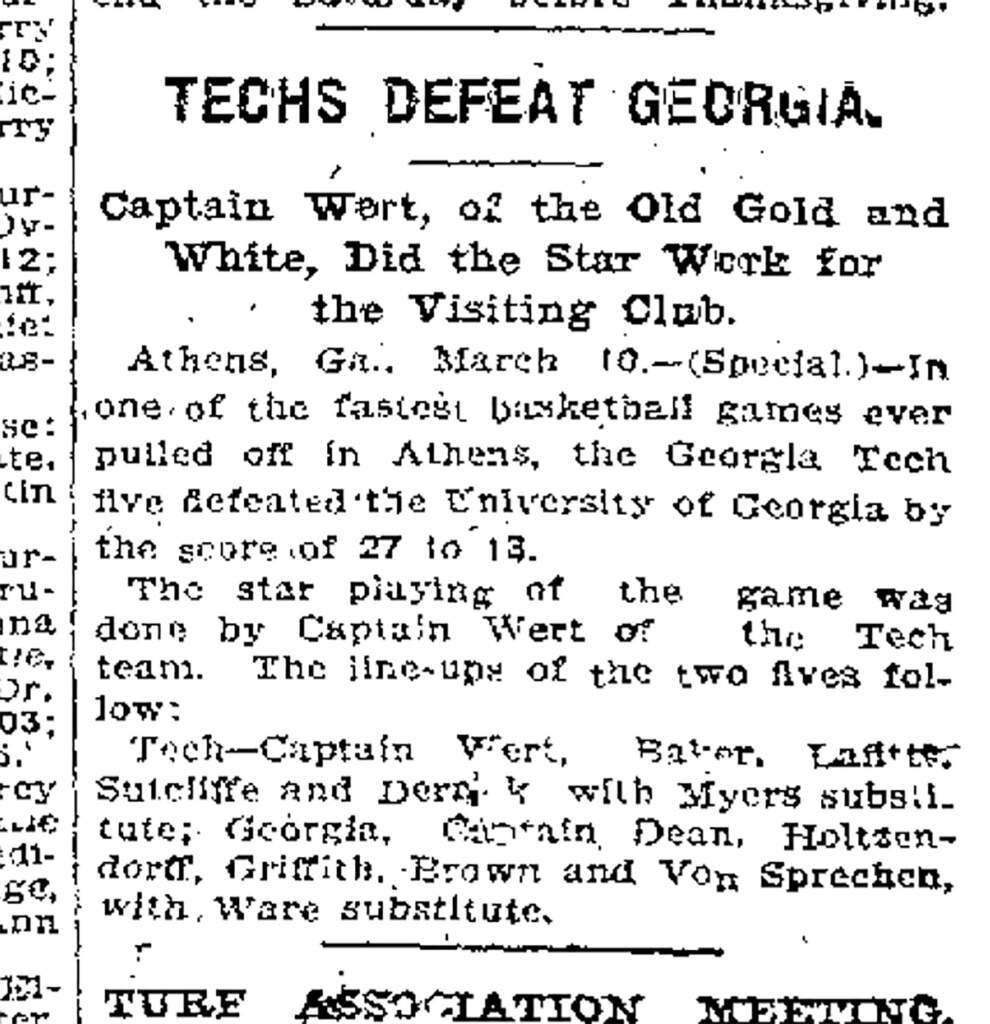 It was nearly three years before Tech competed in an intercollegiate game again, this time under the guidance of a full-time coach as the legendary John Heisman added basketball to his duties as football and baseball coach.

Still without an on-campus gymnasium, arrangements were made for Tech to play its home games at the St. Nicholas Rink on Ponce de Leon Avenue, a facility that would provide ample room not only for basketball, but for the big dance that would follow each game. Unfortunately, a cold snap swept into the Atlanta area just days before the scheduled opener against Mercer University, forcing Tech to search for an alternative to the unheated rink.

Despite short notice, Tech secured the use of the Cable Piano Company Hall on Broad Street near the Piedmont Hotel. On Jan. 9, 1909, a “goodly crowd” paid 25 cents for admission to the ballroom turned gymnasium to see the Jackets defeat Mercer, 28-8.

Tech’s lack of experience after the three-year layoff quickly became apparent as the Rambling Wreck lost its five remaining games to veteran squads from Georgia, Auburn, Tulane and the Atlanta Athletic Club. Still, the season was considered a step in the right direction and plans were made for the following year. The 1909-10 season never materialized, however, as the lack of an adequate playing facility again proved too great an obstacle and the sport was dropped. 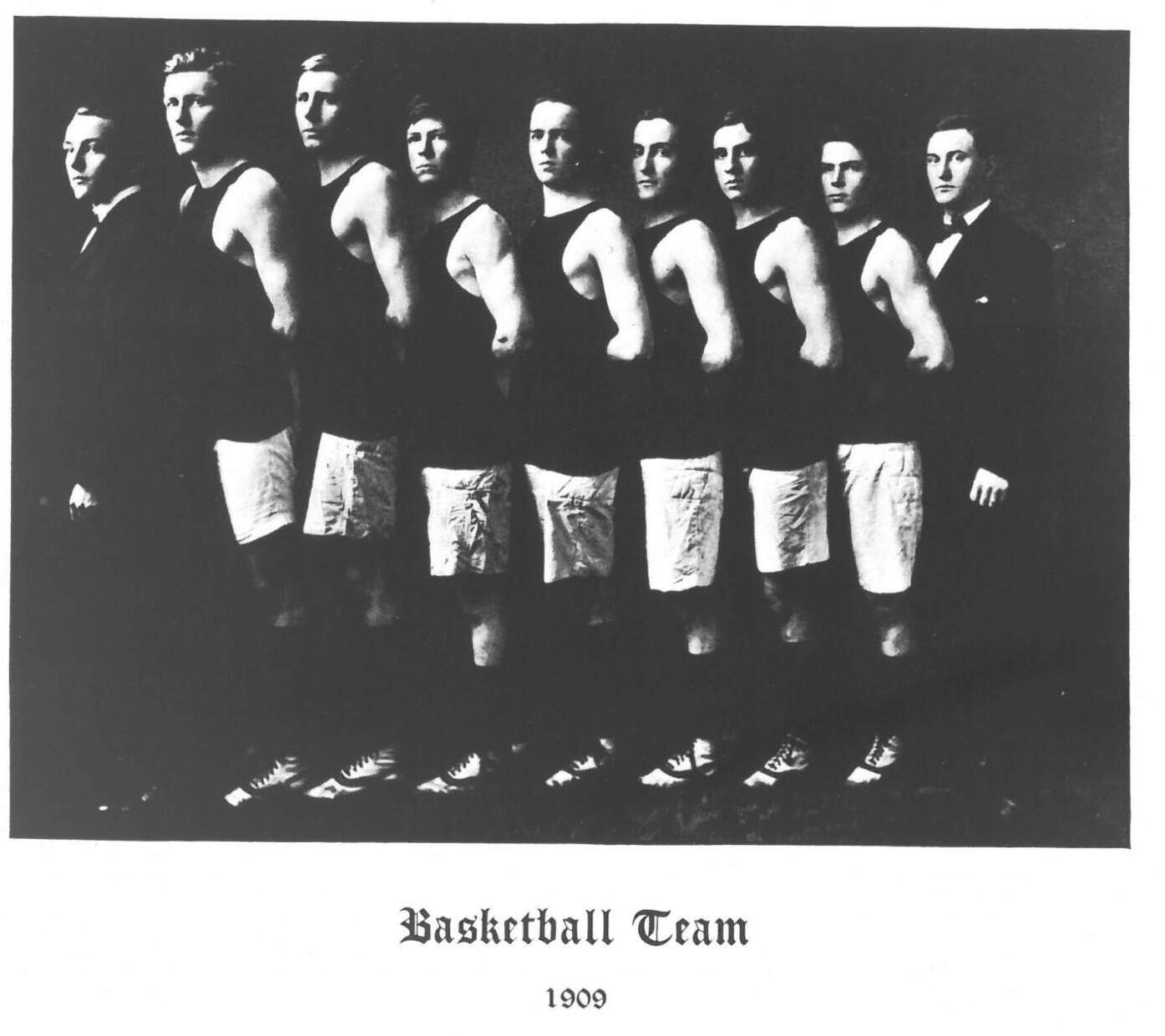 The Athletic Association took a major step toward reviving the game in 1912 with the allocation of $500 to transform the old campus foundry on Cherry Street near Third Street (later the site of the Dean of Students Building) into a basketball arena.

The remodeling involved the plastering of walls, removal of existing obstacles and installation of screens to protect the many windows as well as the addition of a new 25-foot ceiling and the installation of 18 80-power incandescent lights to illuminate the 100′ x 50′ playing court. Though the cost of the renovation eventually reached $800, on Feb. 23, 1912, the Crystal Palace was ready for play as the Athletic Association sponsored an intraclass basketball doubleheader and free postgame dance. The combination proved popular among the student body and was continued for the next few weeks, setting the stage for varsity competition in 1913.

On Feb. 8, 1913, the Rambling Wreck played its first game ever on campus as Clemson visited the Crystal Palace. Unfortunately, the inaugural intercollegiate game in the Crystal Palace was a disappointing one as the visiting Tigers won, 26-22.

Tech would not win its first game in the Crystal Palace until the following season when it defeated Vanderbilt on the way to a 6-2 record. Despite the success of the 1914 team, the program received another setback as the sport was discontinued for financial reasons, again leaving one of the South’s athletic powers without a basketball team.

In 1919-20, basketball returned for good as coach William Alexander, the man for whom Alexander Memorial Coliseum is named, organized a team for intercollegiate competition. The Rambling Wreck was again without an on-campus facility suitable for the sport and thus had to make use of any available court. During the 1919-20 season, Tech played four times at the City Auditorium, once at the Atlanta Athletic Club on Auburn Avenue, and once at the YMCA on Luckie Street before playing its last 10 games on the road.

Tech continued to be primarily a road team for the next four seasons, playing no more than six games in any one season on its adopted home floor at the City Auditorium. Joe Bean replaced Alexander as the coach for the 1920-21 season, but after a 4-10 record, Alexander returned to the helm for the next three campaigns. During this time, an on-campus gymnasium was discussed with plans drawn for a facility on Third Street between Techwood and Williams, the current location of Towers and Glenn dormitories. The cost was considered prohibitive, and the Athletic Association elected instead to increase the seating capacity of Grant Field so as to realize additional revenue for a better gym in the future. 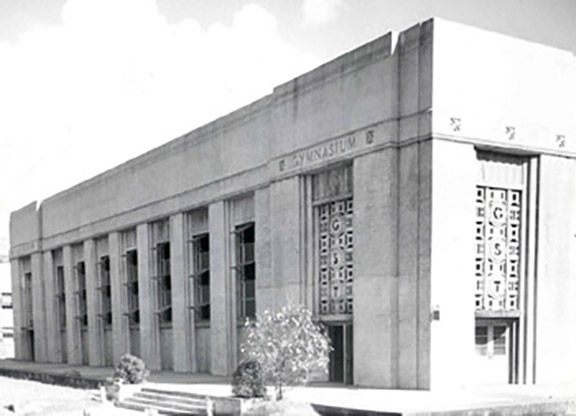 In November of 1924, a “temporary” wooden gymnasium was erected at the corner of Third Street and Techwood Drive beside Grant Field (the current location of the Edge Center), providing a 2,500-seat structure with a 90′ x 50′ playing court. After a disappointing 1-6 home record in 1924-25 under new head coach Harold Hansen, the Rambling Wreck established itself on the new floor, winning 29 of its next 37 games as Roy Mundorf took over as head coach for the 1926-27 season. The “Temporary Gym” proved to be all too appropriately named because in the summer of 1931, the building was destroyed by fire, again leaving the Tech basketball program homeless.

With the nation in the midst of the Depression and money for a new facility lacking, Tech had no choice but to move its home games back to the City Auditorium, where it played the next four seasons until the facility was closed for reconstruction.

President Franklin Roosevelt’s New Deal recovery program provided salvation for the Tech program as the Civil Works Administration’s construction of a new Naval Armory on the former site of the Temporary Gym provided an 1,150-seat facility that allowed the Yellow Jackets to finally settle on campus.

Given the limited seating capacity, admission to games at the Naval Armory was limited to Tech students and faculty, and the Rambling Wreck made the most of the home court advantage. After losing the opening game of the 1935-36 season, Tech compiled a three-year mark of 22-2 on the Armory floor, winning its last 19 games in a row, including perfect slates of 6-0 in 1936-37 and 10-0 in 1937-38.

The 1936-37 Tech squad, captained by future head coach John “Whack” Hyder, posted a 10-0 record in the Southeastern Conference, which was formed in 1932-33 with Georgia Tech as a charter member. The following year, Mundorf’s squad marched to its first SEC title with an 18-2 overall record and a 12-2 conference mark. 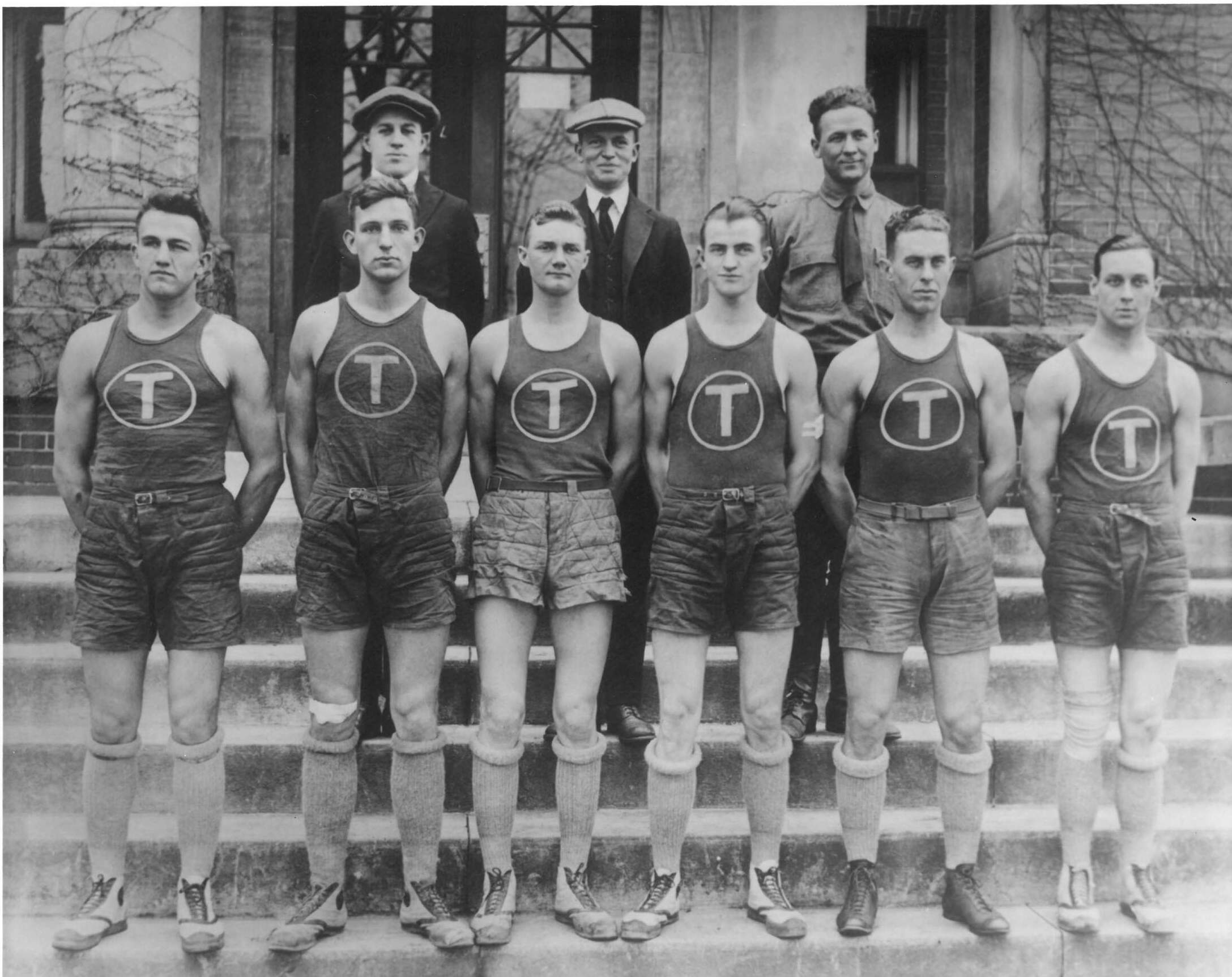 In the meantime, appropriations from the Board of Regents as well as another New Deal agency, the Works Progress Administration, allowed work to begin on the Heisman Gymnasium, which was located on Third Street (now Bobby Dodd Way) adjacent to the North Stands of Grant Field until it was razed in 1995.

Designed by the Georgia Tech Architectural Department, the building opened for the 1938-39 season as the first completely reinforced concrete structure on the campus.

With a capacity of just 1,800, admission was again limited almost exclusively to students and faculty, and over the course of 18 seasons in the gym, the Yellow Jackets were a difficult team to beat on their home floor. In an era in which Tech was just 72-151 (.323) away from home, the Jackets sported record of 98-61 (.616) at Heisman Gym.

The Heisman Gym has a place in history as the site of the first intercollegiate basketball game to be televised in the South as WSB-TV broadcast Tech’s 81-45 win over Tennessee-Chattanooga on Dec. 11, 1948, just two-and-a-half months after television was introduced to the region. The entire home schedule was broadcast that season, and fans who were unable to obtain a ticket to see the game live could go next door to the Naval Armory and view the contest on one of the many television sets set up for that purpose. Also for the first time, Tech’s entire home slate was broadcast by radio.

Inside The Chart – Virginia
Georgia Tech Travels to Face No. 13/12 Virginia