THE FLATS — If only everyone could see things the way Georgia Tech baseball head coach Danny Hall does….

It’s probably something some GT Baseball fans wished in frustration they could have the past two years, as the Yellow Jackets were unable to qualify for the NCAA Tournament.

On Monday afternoon, the Division I Baseball Selection Committee did in recognition and praise, selecting GT the No. 3 National seed in the upcoming NCAA Tournament.

“This is where my vision for our program has always been,” said Hall, the 2019 ACC Coach of the Year, of his Coastal Division champion and ACC Championship runner-up, who’ll make the program’s 32nd appearance in the NCAAs, with its highest seed since being a 2 in ‘05. “To kind of see that come to fruition after a couple of tough years is very satisfying. 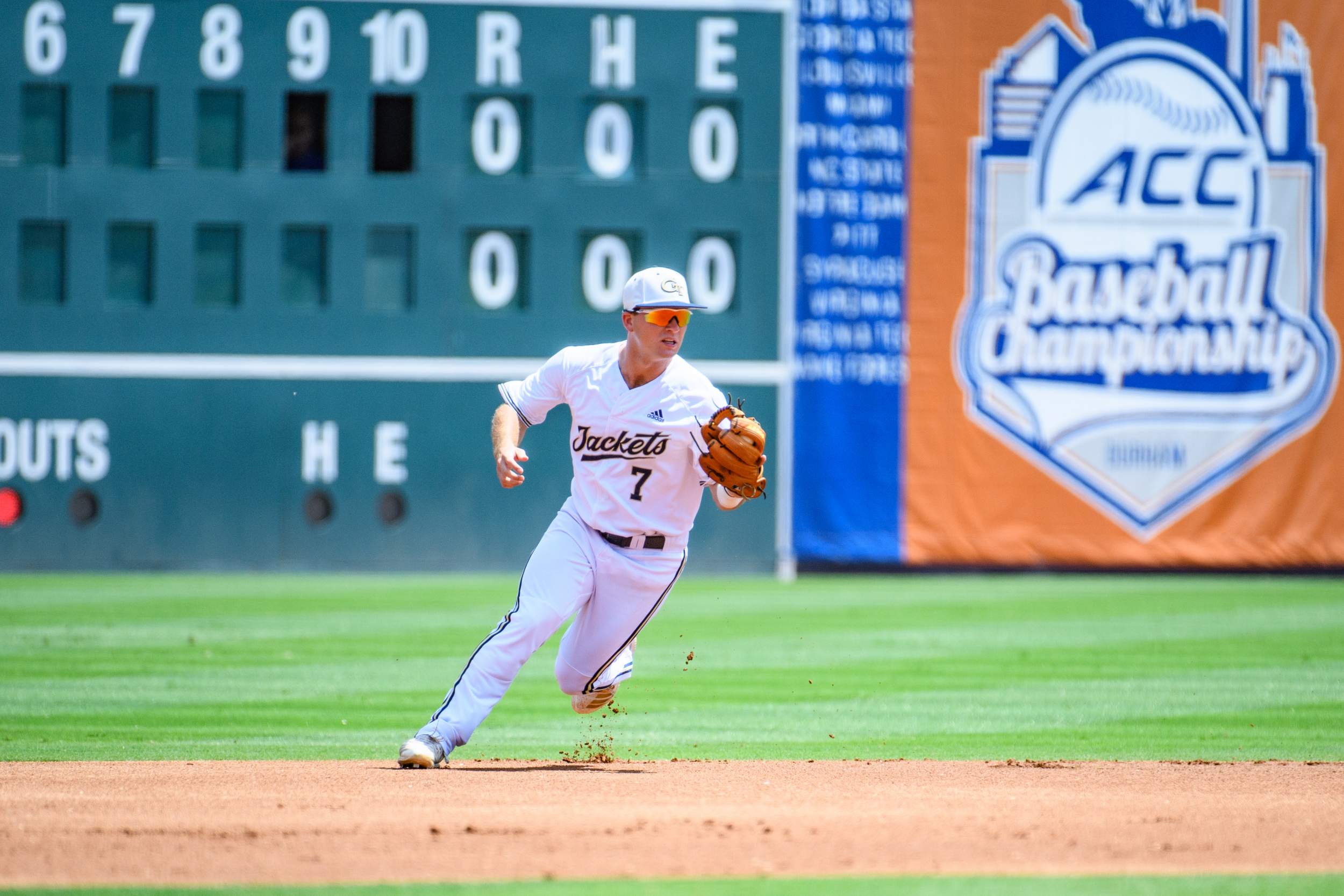 “It’s been a testament to our guys, how strong that senior group is, not only on the field but off the field. They’re very close friends. They’ve done a great job of leading our team,” he added. “You can’t say enough about the job our coaching staff has done to put these guys in positions to perform well. So it’s very gratifying, satisfying.”

Those thoughts of gratification and satisfaction actually were preceded Monday by a different feeling upon learning that the number 3 would be attached to his team. Hall summed it up in one word.

“‘Wow!’” he said. “I was hoping we were top-8 but to find out that you’re a 3….Again, tip of the cap to our players, our coaches, and our administration that this has happened. I was surprised we ended up at No. 3, but when you look back on the body of work — who we played, our strength of schedule, strength of non-conference schedule, winning all those series in the ACC, which are really hard to win going down the stretch, and then playing well in the ACC Tournament — I certainly understand it. I’m glad that the committee recognized how hard these guys have worked throughout the year to put ourselves in this position.”

One of those hard workers is redshirt-junior first baseman/pitcher Tristin English, one of three Jackets first-team all-ACC(they had a conference-high six overall) and a semifinalist for the John Olerud Two-Way Player of the Year. He shared Hall’s satisfaction — and surprise — at the seeding.

“Initially, that was a shock to most of us,” said English. “Coming into the week we were on the bubble to be a national No. 8 seed. Then when the selection show started and we saw we were No. 3, it excited us even more exciting.” 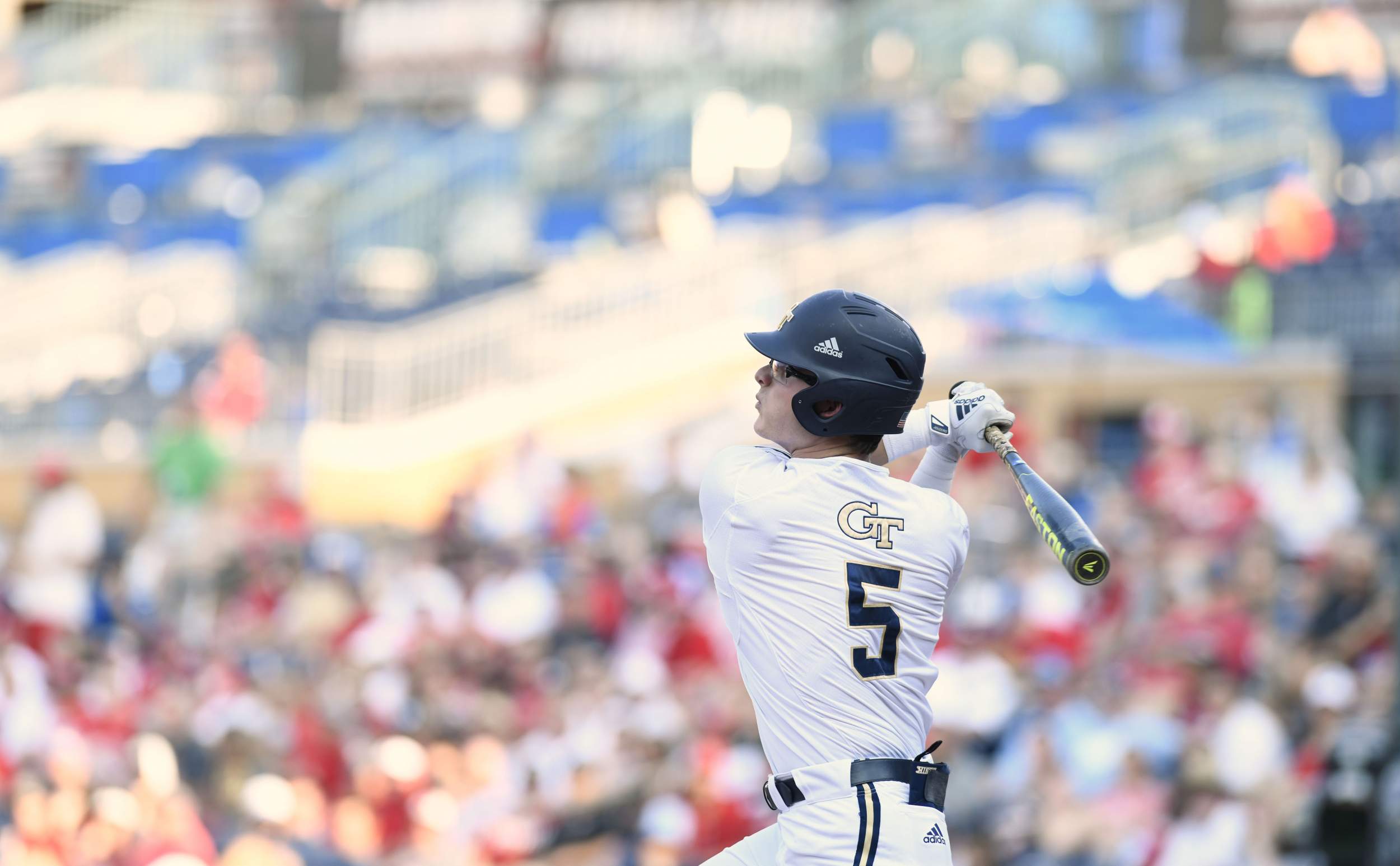 Hall knows better than to publicly say, ‘I told you so’ to those that didn’t share his vision for the 2019 team, and there are plenty of them.

They’re the ones who predicted a fifth-place finish in the Coastal.

National media wasn’t much kinder. Only Collegiate Baseball (No. 17) and the National Collegiate Baseball Writers Association (NCBWA) (31) ranked the Jackets in the preseason and they both dropped the Jackets out of the rankings after losing a home series to UCLA, the then-No. 3 and now No. 1 nationally ranked team. Tech would be ignored until early April, when they couldn’t be any longer.

Even then, almost reluctantly, pollsters included, then snailed the Jackets up the poll, with them finally breaking the top 10 in May on the strength of their finishing by winning a school-record nine straight ACC series and 10 overall.

The players saw what was going on and used what they saw as a slight as fuel.

“Honestly, I thought we’d been overlooked the whole season,” said junior second baseman Austin Wilhite, whose acceptance of a move from short to second and his seamless transition with sophomore shortstop Luke Waddell personified the team’s unselfishness. “Seeing what our guys have put in, the wins that we’ve taken from teams, in the SEC and ACC this year, that I knew we should have been higher even earlier in the season. Seeing when we came out as No. 3, I really wasn’t surprised. I was actually kind of glad that teams are looking at us as a higher team than what we were.” 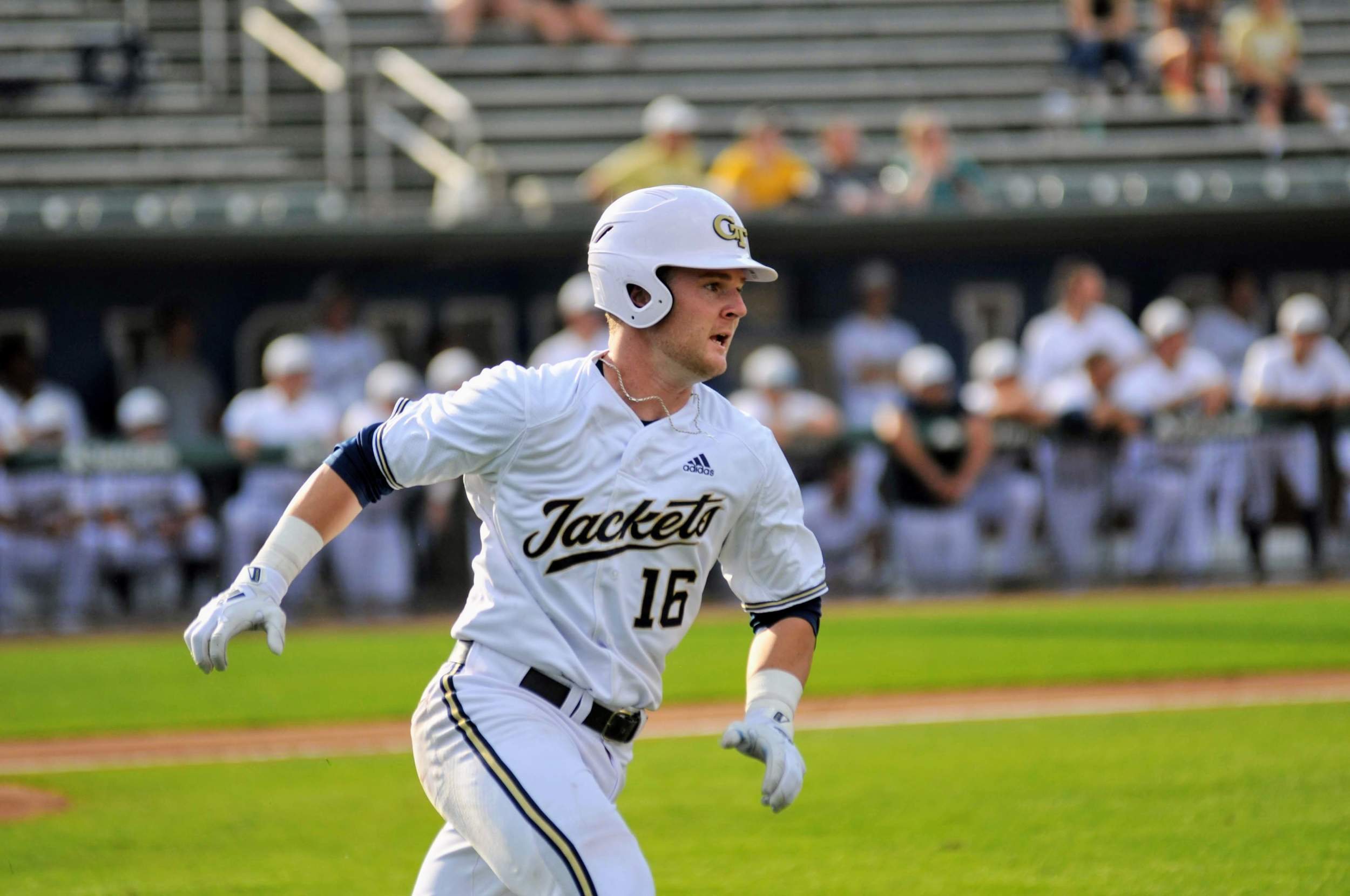 Giving these teams a look at Russ Chandler Stadium, something Auburn saw unsuccessfully earlier this year (they’re 50-65 all-time) and Coastal last saw in ‘16, when they were swept, kick-starting their national championship sprint (they’re 5-16 overall) — FAMU hasn’t been to Atlanta since 1984 (they’re 0-2) — and an earful from the Jackets faithful is something the team is eagerly anticipating.

“I certainly hope so. There has been momentum building with crowds,” he said. “Our fans need to get in here and buy tickets and show up and be very vocal because our guys respond well when there’s people sitting in Russ Chandler Stadium with white and gold on. I’m calling on them right now to buy tickets, get in here and watch our team play.”

The players expect to feed off that crowd as they did all season, going 24-9.

“It’s huge for us, just being able to be at our home field, seeing our fans come out and know the environment,” said Wilhite. “I didn’t think we’d be here the past two years I’ve been here, but being here is a great feeling and I can’t wait to see where it takes us.”

They know where they WANT it to take them. 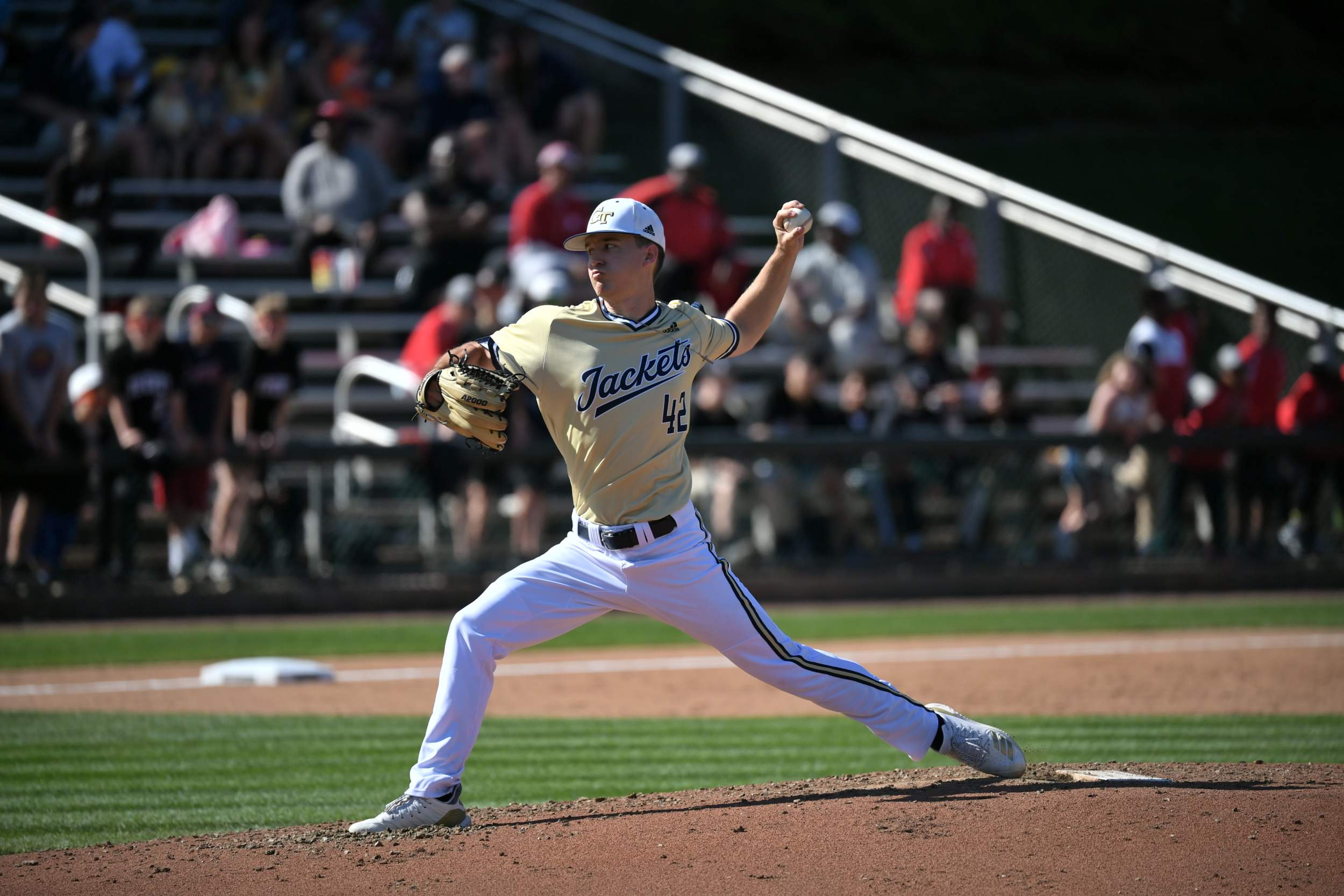 Still, the Jackets are reining in their excitement and pumping the brakes on the season’s accomplishments. They know there’s a lot of work ahead to reach their ultimate goal for returning the program to prominence.

“We haven’t done anything yet. All we’ve done is get the No. 3 seed. We still have a long way to go as far as winning a regional, winning a super regional, making it to Omaha,” said English. “That would really solidify our culture here and the comeback we’ve tried to make. But just being in our first year with new hitting coach James Ramsay, new assistant coach Dan Jaffe, to be able to make the strides we’ve made from last year just speaks testament to them.”

Wilhite will let the team’s play do the talking, as it has all year.

“This is a gritty team and we’re coming for anybody who’s in our way and we’re going to give them our best fight.”