Charlie Thomas didn’t know what to think when Georgia Tech coaches suggested that he play inside linebacker because, well, he’d been a defensive back for years before playing outside linebacker last year.

Either position, he always had room to run, plus, he’s not the biggest guy at 6-feet-2, 210 pounds or so. Now, the sophomore from Thomasville works closer to large people all the time.

“At first, I really didn’t like it,” he said. “It’s just bigger guys and I have to use my leverage and my agility to be quicker than them, faster than them.”

After turning Bobby Dodd Stadium into Thomasville with a game-high nine tackles, two sacks and a forced fumble in last Saturday’s 14-10 win over the University of South Florida, Charlie took ACC Linebacker of the Week honors. 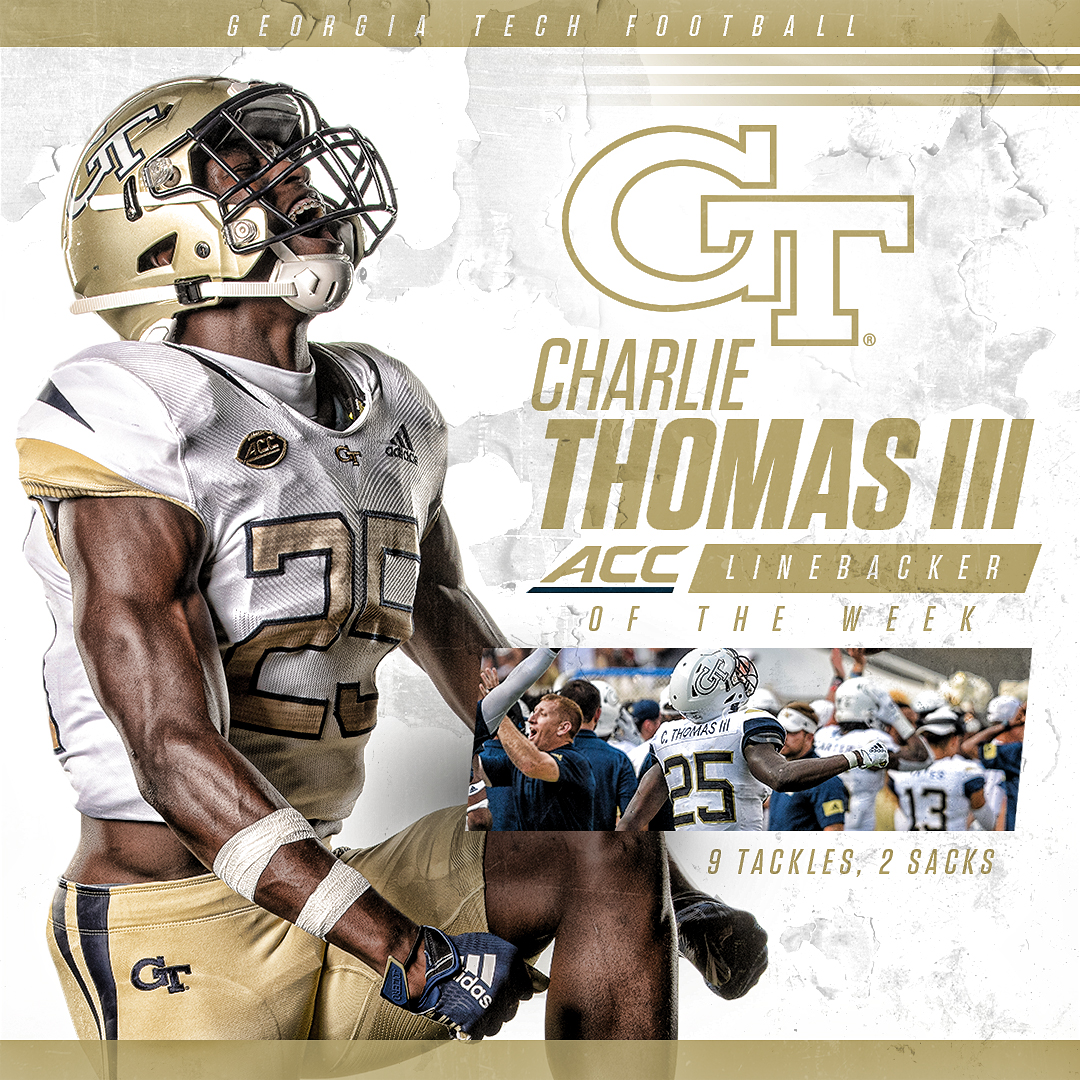 He sniffed out the two plays before USF fumbled at the goal line in the fourth quarter, making back-to-back tackles on first and second down before the Bulls’ critical cough-up on third.

“I feel like I’ve really gotten way better with it, and I feel like I got an advantage because I’m way slipperier and faster than most inside linebackers so I feel like I can use that to my advantage,” he said.

Don’t look for linebackers coach/defensive coordinator Andrew Thacker to be surprised that Thomas is leading Tech with 15 tackles through two games.

When the new coaching staff went about positioning players before spring practice and to a degree before fall practice, Thomas was a candidate for safety, which he played primarily at Thomasville. Then, there were the linebacker positions in Tech’s base 4-2-5 defense.

The Jackets have depth at safety without him, as junior Tariq Carpenter and sophomore Juanyeh Thomas are the team’s second- and third-leading tacklers with 13 and nine. They’re bigger than Charlie, by the way, as Carpenter goes 6-2, 223, and Juanyeh 6-3, 216.

And linebacker is light in numbers.

This shouldn’t come as a surprise to Tech fans. Head coach Geoff Collins and his staff are not typecasting players by height and weight. That helps explain freshman defensive back Kenan Johnson, who is 6-1, 176, taking some snaps at defensive end in third-and-long situations.

“When we get into those situations, we can be really creative with who we put on the field,” Thacker said. The goal is to get as many fast defensive and disruptive players on the field [as possible] . . . We don’t have Von Miller on our team. We don’t have Khalil Mack, so we’re not going to be confined by body types or tradition . . .

“We’re trying to find who can be the most disruptive humans in the game, and for whatever reason, Charlie Thomas has a playmaker ability at that inside linebacker position. He’s able to be covered up by down linemen and be aggressive. We can use him in coverage, and he’s got a way of being disruptive.” 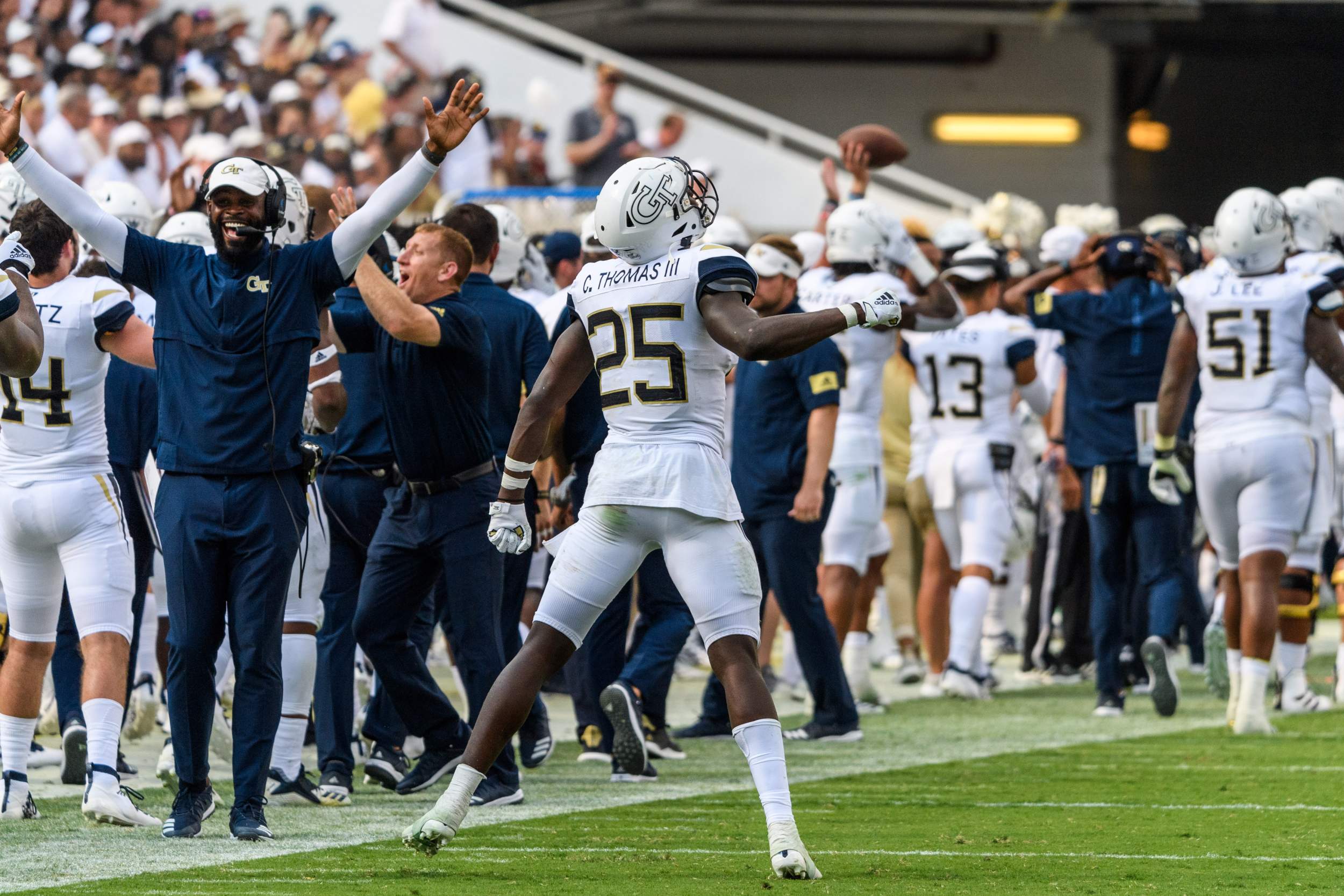 Charlie made impressions as a freshman. He started six games, played in 10 and was fifth on the team with 48 tackles. He also led the Yellow Jackets with three fumble recoveries.

He was ready when USF quarterback Jordan McCloud lit out for the end zone on second-and-goal from the six-yard-line in the fourth quarter. Thomas was in pass coverage, and made a snap decision at just the right moment to break off that coverage and chase McCloud.

The tackle was made at the one-yard-line, one play before Kaleb Oliver forced a fumble and T.K. Chimedza recovered to preserve the 14-10 lead.