This story originally appeared in the May 2019 edition of Everyday Champions, the official quarterly magazine of Georgia Tech Athletics. You can read the entire issue here.

The ACC Network is coming quickly and Georgia Tech will share the stage in the first premier live event Aug. 29 when the Yellow Jackets will play football at defending national champion Clemson. Yet there have already been seminal moments on The Flats.

On a busy Friday night on April 26, while using the equipment and new space that will plug into the ACC Network, Tech officials simultaneously televised the spring football game, a baseball game against Clemson and a softball game against Syracuse. They channeled/streamed all of it through the new, $10 million control center at the corner of Fowler and 8th Street.

At the same time, the video displays in Bobby Dodd Stadium, Russ Chandler Stadium and Shirley C. Mewborn Field were alight with real-time scores, statistics and highlights, while pushing the Georgia Tech brand as well.

Every bit of video/audio feed ran through the four control rooms, 27 monitors, camera room and replay room on the southwest corner of McCamish Pavilion, where previously there was one control room and two monitors.

“We were able to have four control rooms going at the same time,” said Andy Blanton, Tech’s assistant athletics director for video and broadcast.

When the ACC reached agreement with ESPN in 2016 in to create the ACC Network, the deal mandated that every member institution build on-campus facilities to handle television production of athletic events on its campus.

That signaled that ESPN won’t have to roll up production trucks (and staff) for events that it plans to broadcast on its “linear” channels – ESPN, ESPN2, ESPNU – and ACC schools can choose what other athletic events they want to televise, or stream digitally, on ACC Network Extra to be distributed by ESPN technology. 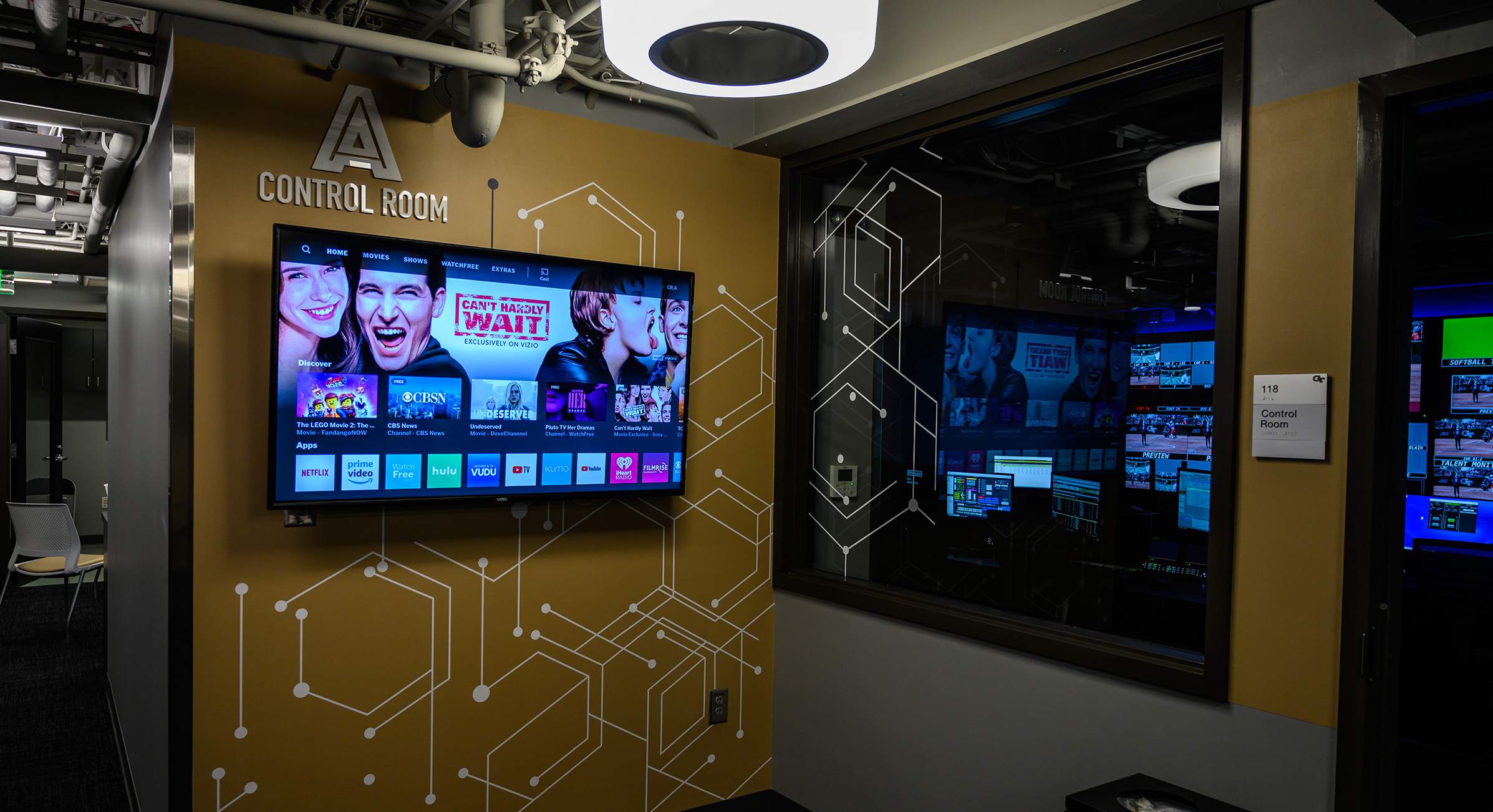 What does this all mean for Georgia Tech fans? A greater ability to consume the Yellow Jackets from the comfort of their living rooms (or anywhere that they have a cellular signal).

Given that ESPN is owned by Disney, ACC commissioner John Swofford is optimistic that by the time the linear ACC Network goes live on Aug. 22, just most fans will be able to see all the action in his conference on TV.

“Mickey Mouse carries a lot of weight,” Swofford said in early May at a regional Associated Press Sports Editors meeting in Greensboro, N.C. “You want to be as strong out of the chute at launch as possible. And based on our internal projections and what we expect the first year, I’m very confident that will be the case.”

ACC Network Extra (the ACC’s online broadcast portal, via ESPN), is already available through the ESPN app and the WatchESPN tab on ESPN.com. If a consumer has a cable/satellite/digital provider who has contracted with ESPN, then he/she can watch any Georgia Tech home athletic event, because Blanton’s goal is to televise athletic event on campus.

In addition to increased exposure for its sports, if the ACC Network hits its marks – league officials have been careful to make no public projections – the conference might bring itself up the list of annual payouts made by Power 5 conferences to their schools.

In the most recent federal tax filings available, which covered the 2016-17 school and athletic year, the SEC – which launched its ESPN-partnered SEC Network in 2014 – sent about $41 million back to each school. The ACC distributed about $26.6 million to each school for athletics.

Multimedia contracts have much to do with these payouts, and various projections by media insiders anticipate the ACC Network could bump per-school payouts by something in the ballpark of $10 million per year.

The SEC Network and Big Ten Network (which is partnered with Fox) have been quite successful. The more recent Pac-12 Network, which the conference owns and operates on its own, has been comparatively less profitable with distribution issues. The Big XII does not have a dedicated network but member Texas has its own network with ESPN). 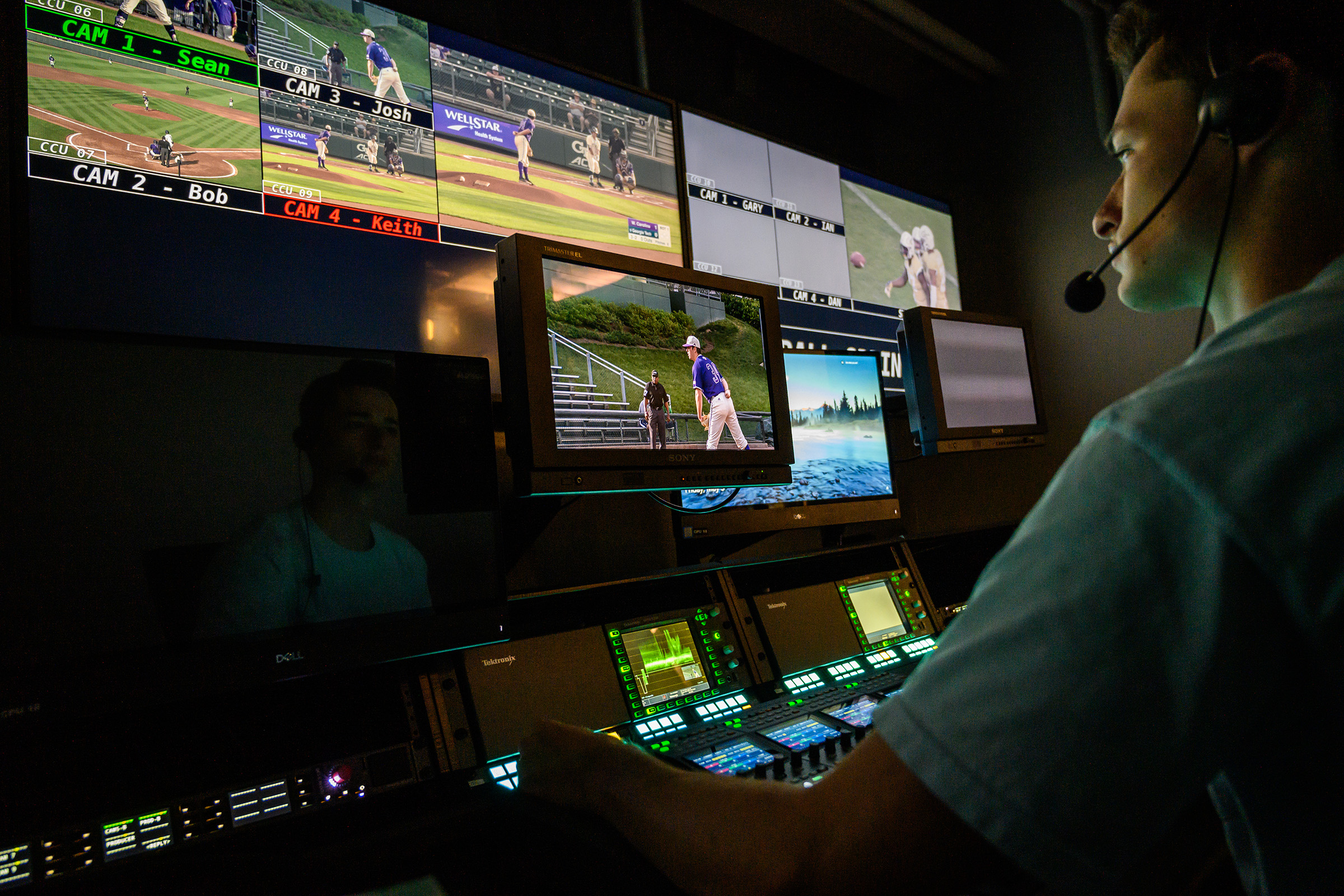 The full-time staff devoted to broadcasting events has grown to seven, plus freelance production personnel for events.

Georgia Tech is all in.

The video and broadcast staff has grown from two full-timers to six, and Blanton anticipates adding a seventh in July in a new fiscal year. Also, “We had four cameras [prior to the investment in the new video control center]. We’ve purchased 13 cameras, some unmanned, some man-able . . .

“Any game that we choose or [the ACC Network] chooses … there is a compensation for that. It’s opportunity to recoup some cost and pay the bills.”

Many producers, assistant producers, directors, camera operators and broadcasters (primarily for Olympic sports events) will be brought in on a freelance basis per event, and Blanton is counting on students jumping into part-time job opportunities.

Where the pool of available freelance media professionals is bigger in Atlanta than in some ACC markets, it’s easier at schools like Florida State and Virginia Tech to draw from the student body because those schools have full-blown media/communications programs. For example, Virginia Tech recently produced a linear baseball broadcast for ESPNU with every camera manned by a student studying for a career in sports media.

Early this spring, he pushed a lever on one of the control boards and explained that was how an operator might “open the iris” on a camera to let in more light if darkness was beginning to fall at a certain venue. If there’s too much blue in the picture, turn down the blue button.

“Right now we have about 20 students who are serving as interns. We kind of split it half-and-half, so we have freelancers who can mentor students, and ultimately we’ll try to create this engine where the students graduate up the ladder, take ownership of more complex roles, and tutor new students.”

On campus, the consideration of video boards may be as important as the TV business.

Last year, six high-definition Daktronic boards were purchased for about $1.2 million and erected at Russ Chandler Stadium (baseball), Mewborn Field (softball), O’Keefe Gymnasium (volleyball), the Ken Byers Tennis Complex, on the north side of Bobby Dodd Stadium over Callaway Plaza, and in the Edge Center.

Those video boards are a high priority, and the idea of adding more around and/or near campus that would run 24/7 seems sure to come up soon (the one aside the downtown connector is not currently under Tech’s direct control).

All of that content is pushed out of the new control center.

You might see new head football coach Geoff Collins up on the big board tossing a football while the Jackets’ regular-season schedule is imposed with a number to call for season tickets. Or you might see highlights from Tech baseball, softball, swimming … anything. 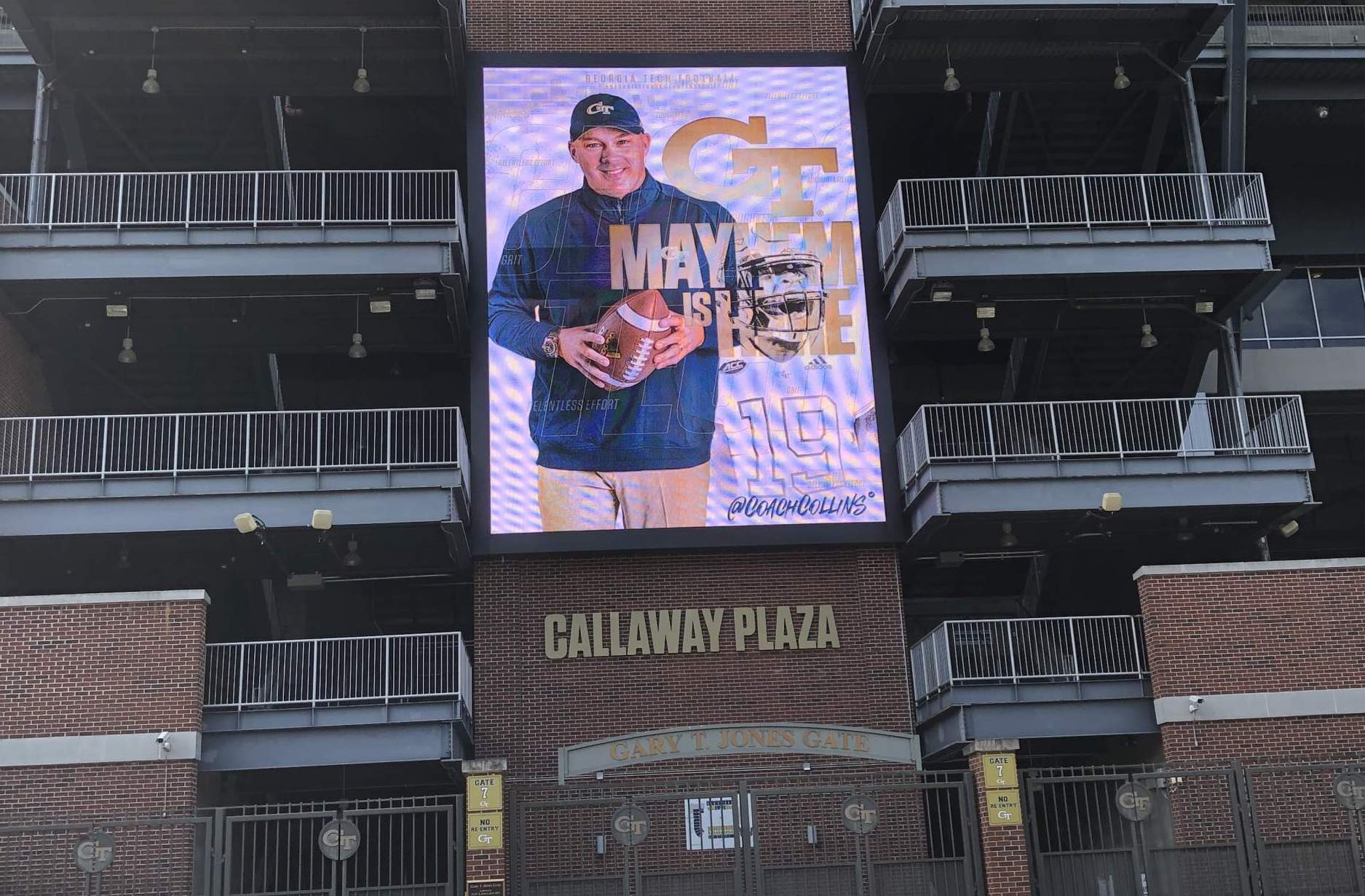 Video boards in Bobby Dodd Stadium, Callaway Plaza, McCamish Pavilion, Russ Chandler Stadium, Mewborn Field and the Ken Byers Tennis Complex are constantly in use with a variety of content items promoting Tech athletics to the public and to recruits visiting campus.

So what won’t Blanton and his team produce?

Regular-season football broadcasts will continue to be produced by whatever network televises those games. At least for now.

The sport of tennis is not lined up with the ACC Network, at least not yet, for sake of distribution difficulties (six playing surfaces going at once), and Blanton pushed the past season of Tech men’s and women’s home tennis on-line through YouTube.

Golf may be problematic in part because events are rarely played on campuses, and even when they are, there may be no fiber optic cable run from campus control centers to venues, plus golf is spread out over so much territory. Likewise, cross country meets are rarely staged on campuses, although some are on golf courses.

But back to the bread and butter of Blanton’s team: live production. If you weren’t able to be on campus April 26, but happened to plug into the ACC Network Extra that evening, maybe you saw Collins up close and personal as he walked and talked viewers through what was going on in the middle of Grant Field.

That was Blanton’s special moment.

“If you would have ever asked me if we’d have a wireless camera on the field monitoring a coach through a drive, I would have told you no,” he explained. “I want to showcase what’s going on here. His idea was why don’t you come out (with a camera) that stays with me first drive of the second half and I’ll tell you everything that’s happening?’

“From a producer’s standpoint, that’s what you dream of: getting it from the horse’s mouth. It was a celebratory moment for us.”

Now that Georgia Tech has the manpower and the hardware, there should be many more to come. 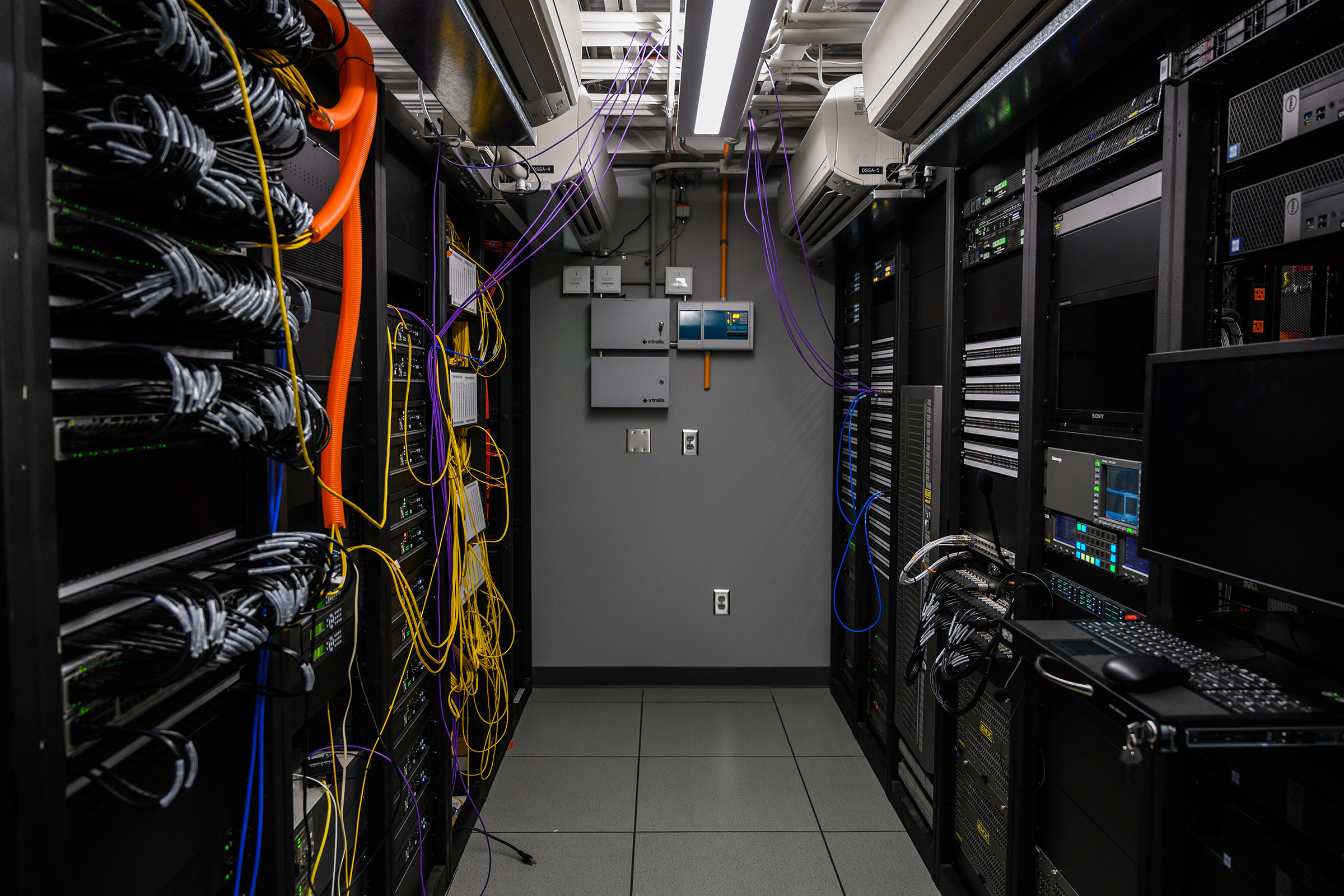