Where better to look for future employees than Georgia Tech?

“IBM reached out to athletic directors of schools in the Georgia area. (Georgia Tech Director of Athletics) Todd Stansbury connected me with their recruiting director, and we developed the involvement from there,” said Total Person Program Coordinator Maureen Tremblay. “They were actively looking to do a hiring push for female student-athletes, as their CEO (Virginia) ‘Ginni’ Rometty, was looking to bring in diverse female candidates for full time and internship opportunities for collegiate athletes. IBM was only one of two companies — the other being RaceTrac — who did a fully concerted push to hire our student-athletes and develop a recruiting program to work around the needs and schedules of the student-athlete experience.”

“I did assessments, I did video interviews, a small paper, I did all the stuff I needed to do for them to consider me,” said Scott, a business major. “They accepted me. They hired me. I knew I needed to get an internship this summer. That was something I was really working on hard since the fall of last year. This fell into my lap at the end of March, the beginning of April.”

On April 6, Scott, Ilgenfritz, Lee and O’Neal got the opportunity to go to Augusta National for a meet-and-greet with Rometty, other executives of IBM and other sports-related dignitaries as part of the first annual Augusta National Women’s Amateur.

Being in front of such an impressive array — especially Rometty — was all at once intimidating and invigorating.

“That was something I was looking forward to,” said Lee, a business administration major. “I definitely was nervous because I was going to meet the CEO so I definitely wanted to make a good first impression. I got offered the internship before I even went to the tournament, so I wanted to reinforce at the tournament that they made a good choice and I wanted to network with people that could possibly be my future co-workers when I graduate.” 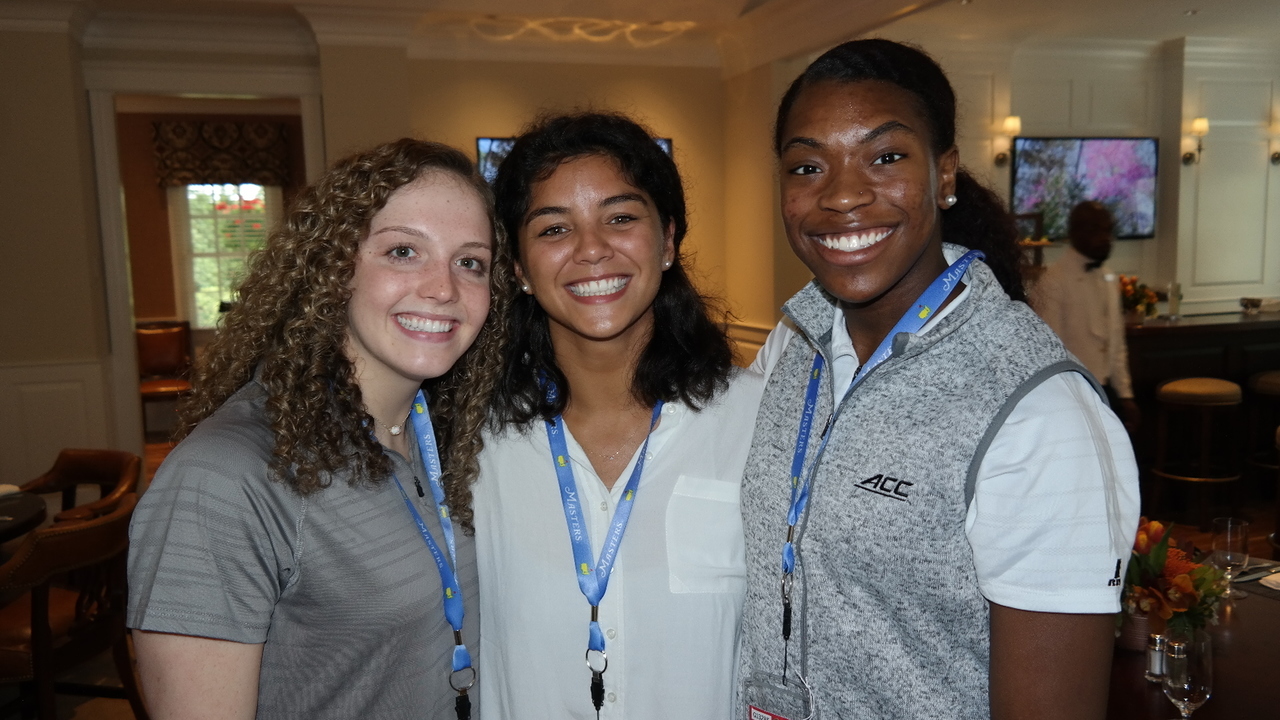 Being the new kid at IBM can be intimidating and while the work has been a grind it’s something all the student-athletes have handled and enjoyed.

“My experience at IBM has been great so far!” said Ilgenfritz, a business administration major, who is working in procurement. “As a whole, procurement has the objectives to increase revenue, decrease costs, and protect the IBM brand. I am working in the Business Services and GPSG business units on projects involving cognitive tools and emerging technology, including blockchain.”

It’s a lot to grasp and cram into a day. Lee’s day is especially long.

“A typical day for me starts with practice in the morning, then I head off to my internship,” she said. “Throughout the day I am making phone calls, talking to clients, sending emails. I do a lot of prospecting and recently I’ve been inviting people to events and we’ve gotten a lot of people to come to these events in Boston. With that, my manager can talk to those people and try to convince them to buy our products.”

Lee’s day is complicated by her needing to find a pool open early enough for her to do her morning workouts.

“Georgia Tech does not offer practices as early as I need them to be for my internship, so right now I’m swimming with the club team SwimAtlanta,” she said. “I get up around 4:50 and practice is at 5:30 until 7:30 and I work from 8 to 4.”

Scott, who is working as a solution sales specialist, starts a more standard time but is no less packed.

“I get to the office at 8. We have three projects due in this internship. So I’ll use the first hour to two hours of my day to work on my ‘Stand and Deliver’ project, which is a practice presentation to a client,” she said. “Then, usually around 10:00, I’ll have a meeting with my manager or my summit manager, or there might be a guest speaker or some type of presentation from like 10 to 11. Then 11 to 12 I’ll go back and start working again. I’ll take a lunch break from 12 to 12:30 then, after that, I’ll go back to doing my work, like prospecting and inviting people to events. Then, around 2:00, I’ll have a call with my manager and she just makes sure I am on track, making sure I’m organizing who I’m talking to and how many emails or calls I make a day. Around 3:00 I’ll collaborate with my fellow interns about the project or if I need help. I’ll finish up around 4 for the day.”

The time with IBM has allowed the Jackets, who played an integral part in a recent IBM sales convention in Boston, to not only learn about important medical and technological developments like IBM Watson Health, but also discover some things about themselves.

“I have been exposed to new tools and technology that are changing the future. Additionally, I have had the opportunity to gain valuable insight from executives and leaders in the business world. And while I have learned skills that are crucial to business success, I believe what I am learning goes far deeper than business. The knowledge I have gained has positively impacted my goals, both academically and athletically, my confidence, and my metrics for success. I would love to have a career within IBM, but I know that this experience will provide me with an exceptional foundation for any career path that I pursue.”

“Communication skills for sure,” said Lee. “I have to talk to clients throughout the day and it’s just been giving me a lot of experience with communicating with others and learning the right things to say and persuading people, which is something that I’ve been getting a lot better at. I would consider myself an introvert so it definitely was a challenge at first to start to get out of my comfort zone and start to talk to people but as I’ve done it more and more I’ve gotten a lot more comfortable with it.”

Scott, and Lee, have gotten more comfortable with each other, as they work side by side.

“I love Chanin. We’ve gotten pretty close these past few weeks,” said Lee. “It’s awesome working with her. It’s great because we have the same background so we both understand where each other is coming from and we both know the struggles we have with school and academics and how hard it is. I’m still in awe that we have such a great opportunity in front of us.”

Scott has noticed an awe from those outside of Georgia Tech toward the Jackets student-athletes and the Institute.

“Every time we say we’re from Georgia Tech the other interns are like, ‘Oh, my gosh, you guys are probably super-smart,’” she said. “Or if we say that to adults, they’re like, ‘Wow! I can say from my past, some of my best workers came from Georgia Tech!’ There’s always compliments being said about Georgia Tech and high expectations. That’s been really cool. I’m proud to say that I go to Georgia Tech.”

Georgia Tech expects its involvement in the program to continue to grow.

“We have a lot of women who are interested in technology, and their experience with being on a team, managing busy schedules, and working through the challenging curriculum of Georgia Tech makes them perfect candidates for IBM,” Tremblay said. “I really appreciate IBM’s push to get more women hired in the technology field to increase diversity and representation, and we will definitely continue to work with them in the future.”