By Jon Cooper
The Good Word

All Georgia Tech student-athletes know about the challenge of expectations and the standard they not only have to meet but exceed every day.

The 20 Georgia Tech student-athletes who participated in the Jackets Without Borders mission to Villa del Rio, Puerto Rico, May 5-12, knew about the raised expectations placed upon them by last year’s mission.

They took to the challenge, made life there better for Angel and Maria Rodriguez and returned better for it themselves.

“The best thing about our group was how well they worked together, the communication and the efficiency they had when they were working because their focus was on getting as much work done as they could,” said Total Person Program Coordinator Maureen Tremblay.

What started as simply adding on an additional space to the house of the Villa del Rio residents, became a race to also complete a roof for them — something they had lived without for nearly two years, since Hurricane Maria touched down. The Rodriquezes were deserving, as Angel has worked for Global Works for 16 years, while Maria has cooked for groups that worked around the community. They’ve also opened their hearts and their house to anyone that was in worse circumstances. Finally, it was decided — not by Angel or Maria — that it was time to help them.

Their situation hit home to the Jackets.

“Every time it rained their house flooded, so it was really important for us to see that project through, especially on the last day, when, while we were working it started MONSOONING, practically,” said Catherine Gross, one of five members of Georgia Tech cheerleading that went on the trip. “Just to see their house flooding was super-inspiring for all of us to work even harder to make sure that we got as much of that roof done as we could.”

“The fact that we came together as one, even though during the project it was storming. We were all out there mixing concrete and moving and it was storming on us,” said football’s Jahaziel Lee, who grew up working construction with his dad during the summers of his youth. “When we were finished that Friday, we were drenched, but the hard work that we put in down there to give this family a roof, I couldn’t be more excited. It feels amazing that these people can now wake up every morning and have a roof over their heads, and when it rains they won’t have anything to worry about. That’s a lift for me and I know it is for Angel and Maria, as well.”

The Jackets not only did plenty of lifting, they worked at a furious pace that surprised locals and forced group leaders to rearrange their supply schedules. They moved some 90 bags of concrete and got it mixed so quickly that they went through the supplies TOO fast and had to order more.

They completed the addition to the house, estimated to take four days, in three or four HOURS on the first day. They then set their sights on the roof. A project estimated to take a year to complete — depending on the frequency of getting groups to come in — was all but done in TWO DAYS! The job was close enough to being finished that several members of the community were able to finish the roof.

Living up to expectations was tough for this group, especially after the Atlantic Coast Conference awarded Jackets Without Borders its Game Changers Award for the 2018-19 academic year. That fueled their passion and served as incentive.

“I was like, ‘Dang, this new group, are we going to uphold the goals that the last group set?’” Lee said. “But we actually did even BETTER and did more! The stuff that we did the first day was supposed to take two to three days. They ended up having to raise the budget to get more material so we could do more work, we went so fast. I’m just kind of stoked about it.”

“The award makes it even more special,” said Gross. “Learning halfway through this semester, after I’d already committed to going, that we’d won that award made me even more excited to go and experience what they’d experienced.”

The group’s ability to bond was important and came almost immediately.

“This definitely showed the value of relationships with other people,” said freshman volleyball setter Gabi Dolan. “This was partly learned through the work we did by how quickly I was able to bond with the group of other student-athletes. Because of the story of the family we were working for and how material things can be taken away so quickly, you have to rely on other people and help them out.”

They set their standard so high that Tremblay said there was a slight feeling of disappointment from some on the last day that they didn’t get to finish the roof — that feeling was replaced by euphoria when Maria sent pictures of the finished roof earlier this week.

Since the inception of Jackets Without Borders in 2017, Georgia Tech Athletics Director Todd Stansbury has stressed how the program impacts the lives of the student-athletes doing the work as much as it does those being helped. That was certainly true with this group.

“It was just very eye-opening,” said Gross, whose mom has been doing mission work through her church for more than 15 years — although this was her first time dealing with concrete. “I definitely am super-thankful every time I look up and see a roof over my head after building a roof for someone who hasn’t had one for two years. It was the best week of my life.” 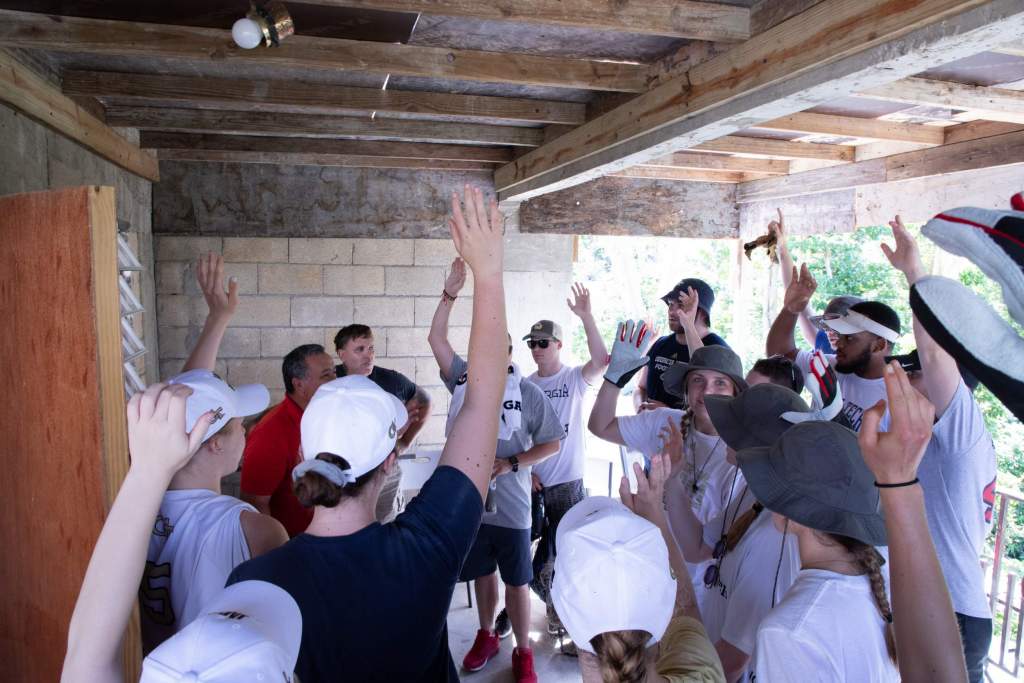 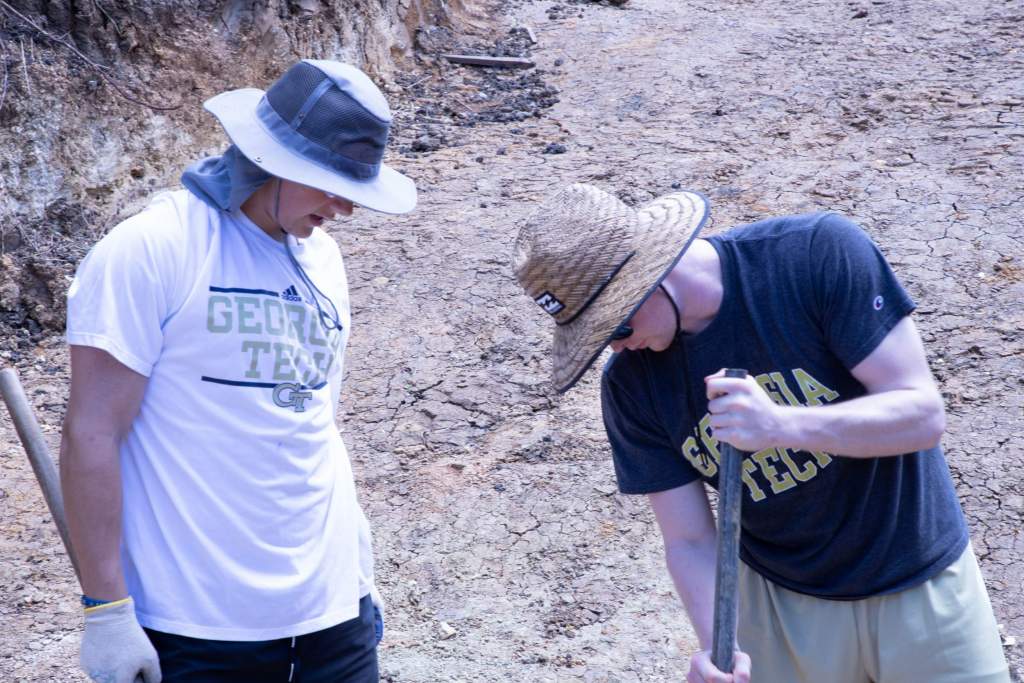 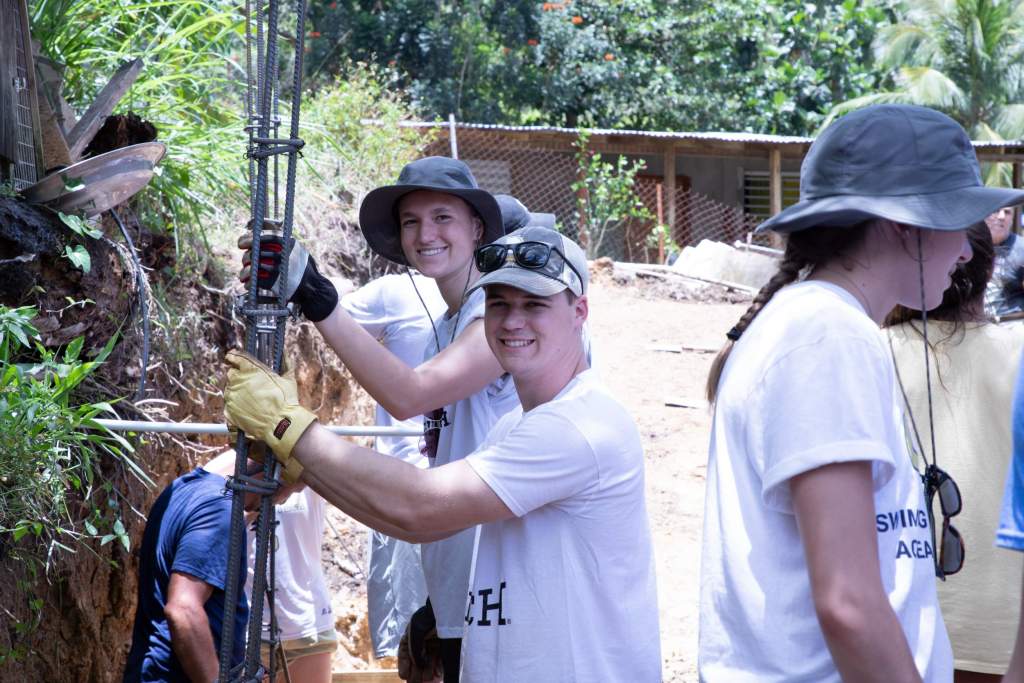 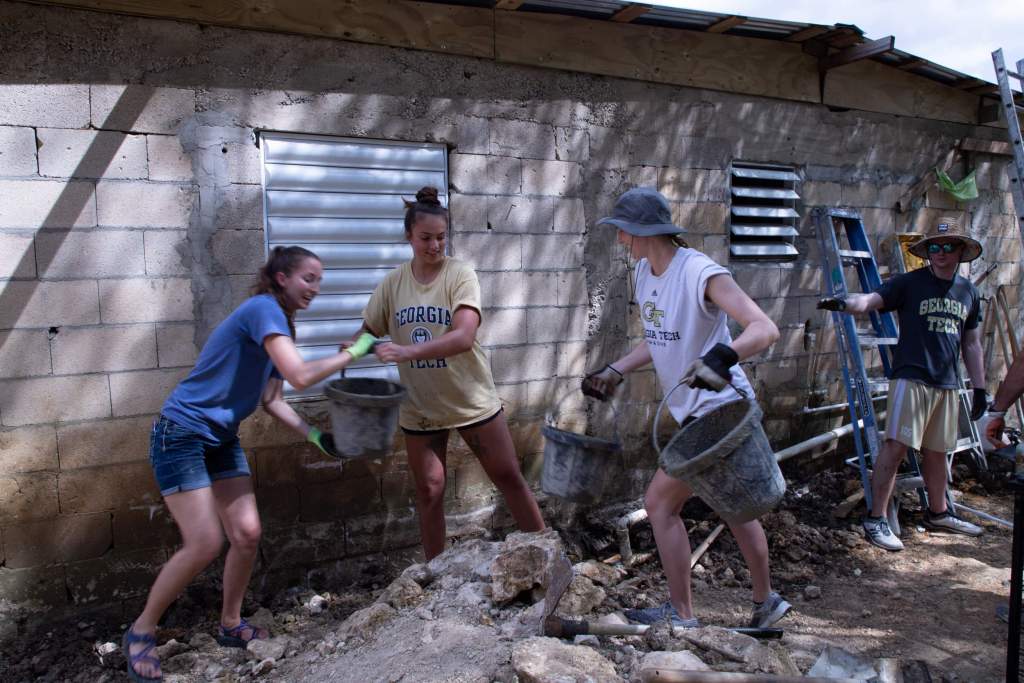 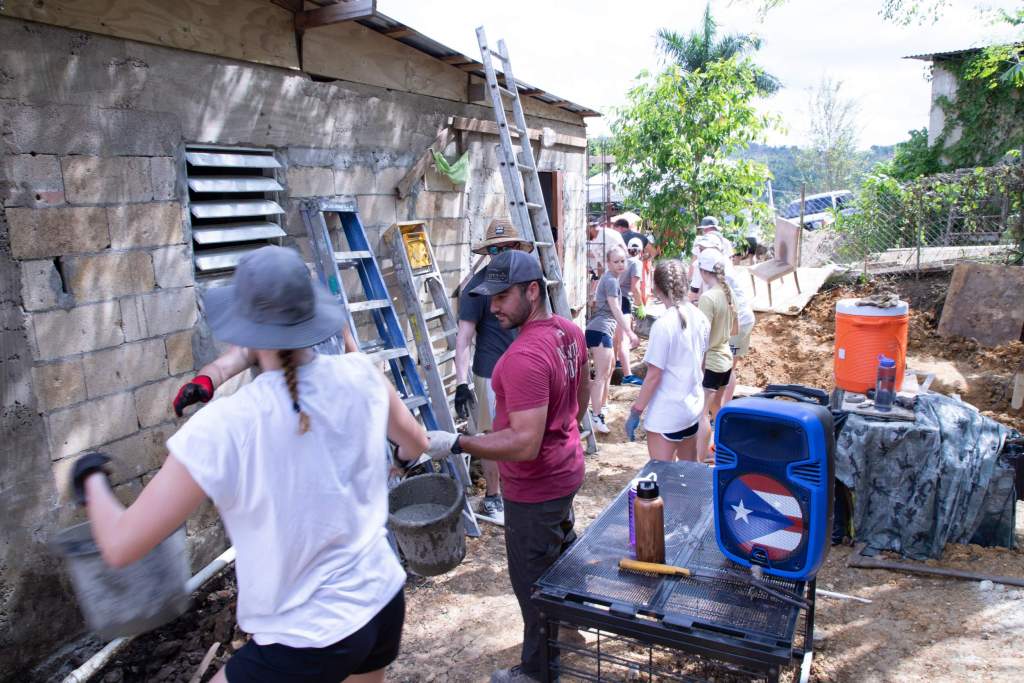 While the work on Angel and Maria’s house is done, the group is not about to forget them. Many in the group traded contact information with them and almost ALL are determined to come back to Puerto Rico, check in with them and help other Angels and Marias.

Dolan is determined to expand her commitment and help those locally.

“This was something that is near and dear to my heart. Serving people is something I love doing,” she said. “I’m trying to figure out right now how to incorporate that into what I do later in life, job-wise. I think it would be special to maybe even go back to that specific town and see how things are going because when you’re working alongside a community and a family like that, they immediately become your family.”

Much like as was done by teammates before them, the student-athletes have started spreading the word about Jackets Without Borders to their teammates.

“I think it’s super-important because there’s still a lot of work that needs to be done,” said Dolan, who was inspired by teammate Sam Knapp. “Then, it’s just a great personal learning experience. It just gives you so much perspective and leaves you with a sense of gratitude for what you already have and maybe things you can do to help other people.”

“I know all five of us that went this year are all super-pumped about going next year,” said Gross. “I would hope that after hearing about our experiences that we could get some other people to be just as excited as we are.”

Lee plans to lead by example.

“It’s easy to explain to guys how much fun I had and how life-changing it is but one of my goals is going to be to SHOW them WHY it’s life-changing. Show them how it changed my life,” he said. “One of the things that I want to do is get out into the community more and help out in the community without having to worry about receiving anything back. I know when my teammates see that, they’ll understand. I want to have a meeting with the guys and tell them that we need TO BE more invested in our community, be more invested into Habitat For Humanity, when they have events. It just shows our character amongst each other, as a team, that we care about others.”

He also had advice for future JWOB groups.

“Just to go out and simply work hard and have your OWN goal,” he said. “Last year’s group had its goal and this year’s group, we had our own goal. Each group should set its own goal to just give it. That’s what we did. Just pass the torch every year.”