Teams Building
Members of Georgia Tech women’s basketball, football did a full-day workout for Habitat for Humanity
By Jon Cooper
The Good Word

There’s been a lot of impactful construction done around the Georgia Tech campus in recently. Just last week, the Athletic Association unveiled the brand new football locker rooms, and McCamish Pavilion is only six years old.

Yet, with all of this building around campus, some of the most impactful construction — albeit far less-heralded — was actually done by the inhabitants of the new locker room and McCamish. The football and women’s basketball teams recently put in a day’s work with Habitat for Humanity. The lady hoopsters helped put up a multiple-family home in Vine City, while an estimated 10-to-15 football players helped construct a similar facility in Bankhead.

“We showed up at 7:30 a.m. We did the outside of the housing, we put up the trusses on top of the house, which they had all the football guys do because it was so heavy,” said senior wide receiver Brad Stewart, who credited academic coordinator Brandon Pottebaum for setting up the trip. “A lot of the guys were inside nailing, the framing and whatnot. It was a really good day. It ended around 3:30. There were some other community members that were helping us around. It was a good group.” 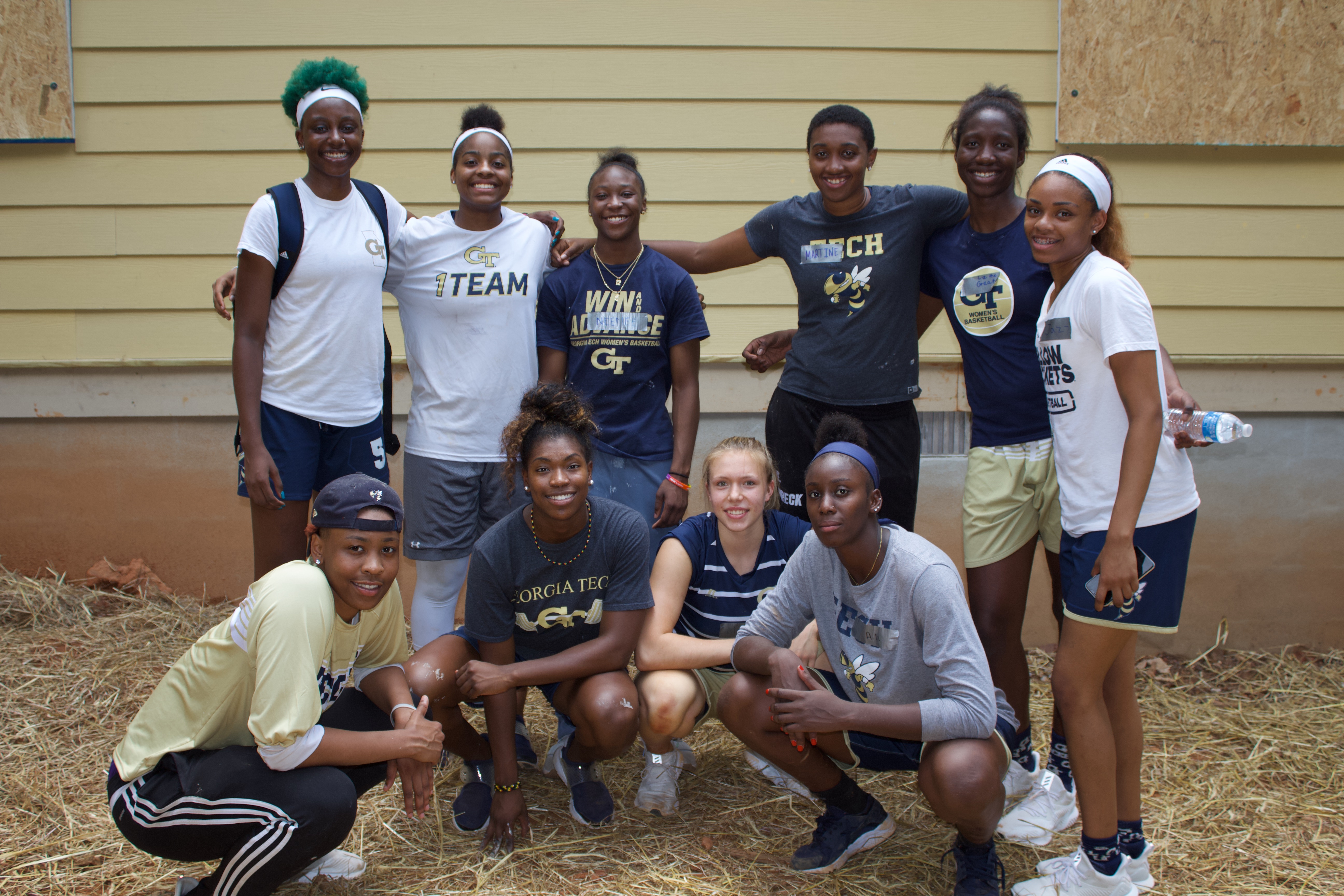 “When the Habitat for Humanity supervisors explained it to us, they kind of break up building the houses into certain days where they get things done for each group,” said senior forward Martine Fortune. “Our day was mostly insulation on the inside of the house, installing that and the siding on the outside. Half of us worked inside, half of us worked outside.”

“We didn’t build the entire house but we did some very important parts,” said junior guard Chanin Scott. “We completely covered the side of the house with siding and we completely installed all of the insulation to the house and all of the caulking. Those are base fundamentals that you need for a house to be considered a shelter.”

Stewart, Fortune and Scott had done similar work in May as part of the Jackets Without Borders service trip to Puerto Rico to help rebuild in the wake of Hurricane Maria. That trip fueled them to go to work again, this time closer to home.

The opportunity to volunteer time with Habitat was important enough to Stewart that he left his family’s home in Savannah at 2:30 in the morning of the Saturday build — he’d been there Friday night visiting and celebrating his brother’s 16th birthday — and drove back to Atlanta (making a quick stop to drop his sister, Sarah, off at Mercer, where she attends college). He arrived at 7 a.m., picked up a teammate and went straight to the project.

“It was a long day. It was good, though,” he said. “It’s funny because when I got to Atlanta at 7 a.m., it was a monsoon. We thought the day was going to get cancelled but we went anyway and, thankfully, it prevailed and it was great weather the whole day, it dried up, all the mud dried up, and it was a really productive day at the end.”

He considered it an opportunity he simply wasn’t going to miss.

“I had the opportunity to go to Puerto Rico, do something in another country, help out people who really needed help, but to have the opportunity to work in your backyard, to make your own community better also is a great feeling,” he said. “Hopefully Georgia Tech continues to work with Habitat for Humanity and other programs like that and be able to give back to this community.”

Fortune and Scott didn’t drive as far as Stewart to get to their destination but were just as driven.

“When I heard we were doing Habitat for Humanity, especially after the trip Chanin and I had, I was 100 percent on-board!” said Fortune, of the day with Habitat, which was attended by the entire roster that was in Atlanta, including incoming freshmen and several staff members. “I was excited. It’s a different experience from working at school and working at basketball. Building a house, it’s different. It’s an immediate result. You get to see something grow and something change. It’s nice.”

Scott felt the day gave a different but was beneficial meaning to “team work.”

“I really liked doing this as a team project because you had to use a lot of trust,” she said. “For instance, some people had to use like 13-foot ladders to go on the side of the house to do siding outside of the house. So you had to have your teammates to spot you, make sure you’re steady, that you’re not going to fall. Then, inside the house, some of the things were harder to reach for someone who was shorter. So you had to communicate with your teammates who were taller and get them to help you, or passing the materials inside of the house. If somebody was working on something that was really low to the ground or higher, you had to ask somebody to pass you the materials. You had to rely on your teammates for help. So it was a good team-bonding experience.”

The hope is that future generations of Yellow Jackets will bond over these visits while helping Georgia Tech strengthen its bond with the surrounding community. The current teams certainly are proud of doing their part to that end. They’re also excited to see the finished products of the buildings they helped create.

“Definitely, I want to go back and see the finished house. I hope we all have a chance to go back and see it,” said Fortune. “I hope that the few pictures that we took during the build end up being a good recruiting point for students that we’re trying to bring in so they can understand, ‘This is what it means to go here and be a student-athlete here.’ I know it’s near and dear to our hearts — my teammates — and I know it was always a huge thing for Coach Jo. Hopefully we now represent that well for everybody.”

“I’m definitely excited to see the finished product,” agreed Scott. “That would be really cool in recruiting just to show future Yellow Jackets. That’s something that’s important to them in a professional capacity, a value that, if they want to have a career where they want to help people or if it’s just something that they always wanted to do, they can do it here at Georgia Tech.”

Stewart believes the project shows the commitment of Georgia Tech to its student-athletes, especially the Athletic Association via its Total Person Program, which, in turn results in their commitment to give back.

“I knew from day one that Georgia Tech was going to give me every opportunity to be successful on and off the field and I still mean that to this day,” he said. “There’s so much help around the Georgia Tech community, especially the Athletic Association, that being a part of that is something special.

For more information on Habitat for Humanity please visit www.habitat.org.