Every summer, Georgia Tech baseball and softball players can be found in leagues in every part of the country.

The summer of 2020 is different, however. The COVID-19 pandemic has put a stop to many summer leagues, but it hasn’t stopped all of them, and leave it to Georgia Tech players to find them.

Baseball freshman right-handers Jackson Finley and Brody Westbrooks and lefties Evan Boyle, Josiah Siegel, and Dalton Smith are toeing the rubber in the Coastal Plain League — Smith, Westbrooks, and Boyle with the Macon Bacon, Finley and Siegel with the Savannah Bananas — while softball’s junior infielder Breanna Roper and redshirt-junior lefty pitcher Madison McPherson are playing with the Bradenton Slice in the inaugural season of Florida Gulf Coast League softball.

They recognize they’re in a unique situation but are willing to go through the precautions to play.

“I know we have to come in wearing a mask and then in the locker room we have to wear a mask. When we go on the field we don’t have to wear it, but there’s no spitting — like you can’t spit sunflower seeds, or anything like that,” said Smith. “On the bus you have to wear your mask and there can only be 25-to-30 people on the bus. So they’re trying to limit everybody’s space together. Then we have to bring our own water containers and they have a trainer that fills it up. We have to carry a jug out and stuff like that. They’re definitely taking precautions for us. We still take precautions but it’s a lot easier just to focus on baseball.”

“Our team is taking every precaution,” said Finley. “We’re all wearing masks in the dugout during the game and during practice, they have us social-distancing. The fans, we’re keeping it to 50 percent capacity.”

The same precautions are being applied in Florida.

“We get temperature-checked, we get hand sanitizer, they sanitize the dugouts before and after every game,” said Roper. “The league itself is taking precautions so we can feel safe here.”

“Of course all of this going on is very serious,” said McPherson. “But it’s such a great opportunity and we’re getting so much game-time experience. I think it’s really going to help us when we get back in the fall.”

Their passion for the game isn’t blinding them to the seriousness of the Coronavirus but they are determined to enjoy and get better via their respective leagues. 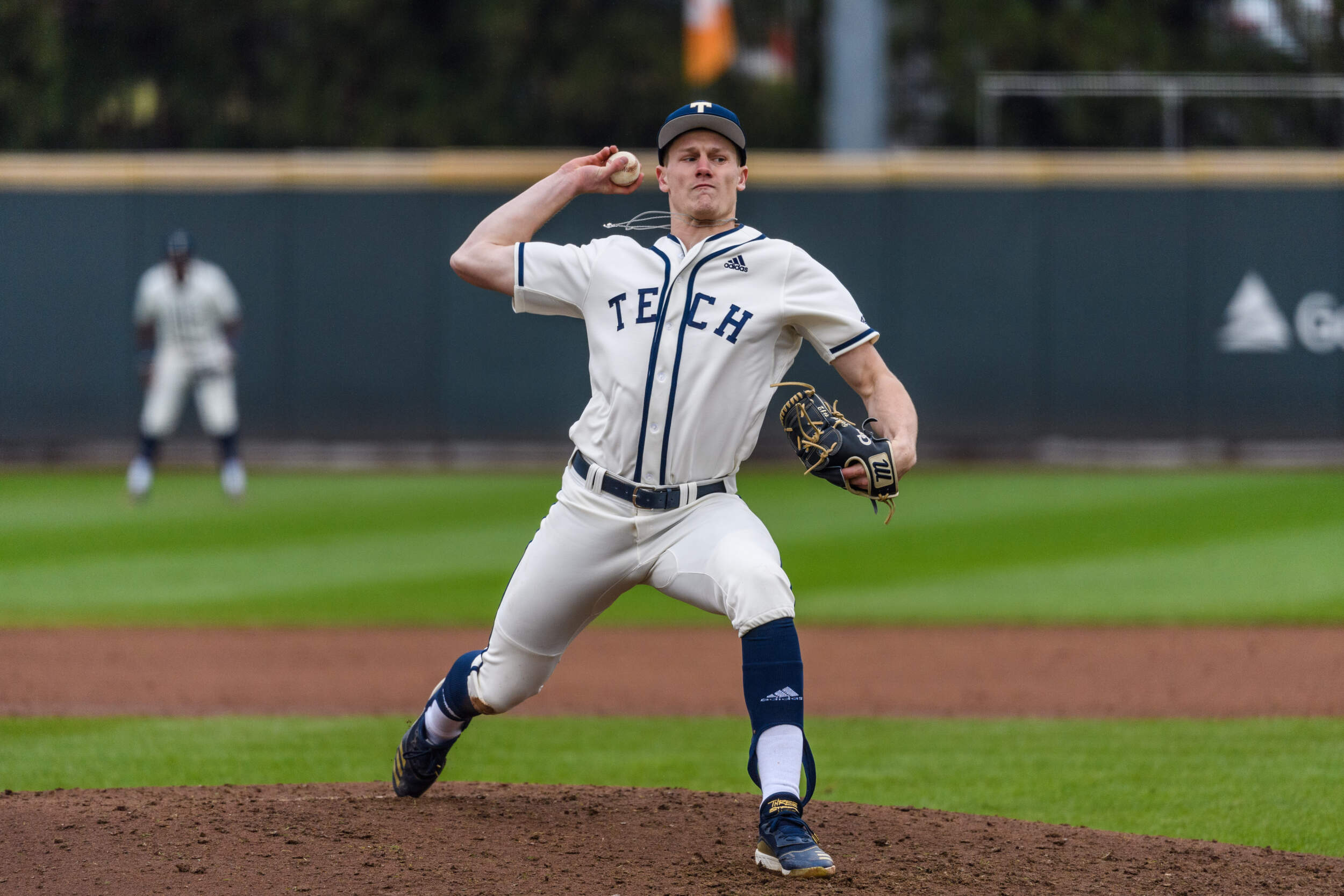 Attrition has taken a toll on the Coastal Plain League, which was founded in 1997 and can include as many as 15 teams from Virginia, North Carolina, South Carolina and Georgia. This year there are seven, but the two teams in Georgia are most interesting for Yellow Jackets’ fans.

They also are two of the league’s most interesting teams, as the Bacon were runners up in last year’s playoffs, while the Bananas, who only joined the league in 2016, won it all that season and have won the South Division the past two years.

This season the Bacon and Bananas are two-thirds of the Southern Division. They played an exhibition game the night before the season began, then three times in the season’s first five days, with Savannah winning three of four. They’ll play 14 more times before the season concludes on Aug. 15, making up 37.8 percent of each other’s schedule.

“There’s definitely going to be some bragging rights between us and the guys on the Savannah Bananas,” said Smith, who recorded Macon’s win on July 6, throwing two scoreless, hitless innings with two strikeouts in the Bacon’s 6-0 frying of the Bananas.

“The first game we faced each other we were talking and I told him, ‘You better be ready because we’re coming for that championship at the end of the year,’” said Finley, who took the loss on July 6, going 3.0 innings, allowing three hits and three runs, all earned, striking out four but allowing two homers. “It’s going to be fun playing against them. I’m excited.”

Playing in the CPL is a dream come true for the Savannah native.

“I remember the first year that they started. I’m at games every year,” he said, adding that he probably has Bananas’ swag in his attic. “I knew as soon as I got to college this was where I wanted to play. So it’s pretty exciting.”

Finley, who lives 40 minutes away from William L. Grayson Stadium, which was built in 1926, rebuilt in 1941 after suffering hurricane damage, and has seen Babe Ruth, Lou Gehrig, Ty Cobb, Jackie Robinson and Hank Aaron play on it.

While he relishes that, his sights are set on playing in the same outfield that recently drafted rookies Michael Guldberg and Baron Radcliff did last year.

“I’m hoping after the summer I’ve taken the necessary steps that my coaches want to see and I can compete for one of those positions because I love hitting just as much as I do pitching.” said Finley, who played both corner outfield spots in the first week.

He’s also looking to build on his freshman campaign — he was 1-1 with a 9.00 ERA with a 5:1 strikeouts-to-walks ratio (15:3) and a .216 opposing batting average, but allowed five earned runs and five hits in his final six appearances, covering 8 ⅔ innings — and add a slider.

Smith, who was 3-0 with a 1.46 (2 ER in 12 ⅓ IP) and a .227 opposing batting average as a freshman, is enjoying life with his host family — he lives a little more than two hours from Macon in Valdosta — and getting to improve, although, he’s sticking to pitching.

“Out of the 12 innings I threw I think I only threw one curveball,” he said. “I’d like to build that curveball. Just try to get that third pitch as best as I can before I go back. Hopefully it will be another weapon that I have in my pitching arsenal.”

He’s enjoyed having Westbrooks and Boyle with him.

“It’s been nice,” he said. “It’s a lot easier to be comfortable around other people. I’m pretty quiet but you can open yourself up when you already know people on the team.”

Tech’s pitchers have enjoyed the Bacon-Bananas rivalry. On July 5, Westbrooks was superb, throwing three innings, allowing one run (on a homer) and two hits, striking out three — although he got no decision — and has allowed just one run in two outings against Macon, as on Opening Night, he threw a scoreless frame, with a strikeout. It was a mixed night for the Jackets, as Smith took the loss.

July 3 also was a nice day for Georgia Tech Bananas, as Finley earned the win, throwing 1 ⅔  shutout innings, with three K’s, and Siegel finished the 13-3 rout of Catawba Valley, with a scoreless, two-strikeout seventh.

“That was amazing,” Finley said. “For both of us to go out there and pitch really well — me to pick up the win and then Josiah coming after me and finishing it up — it really felt good and really has me ready to get back to Tech and do the same thing.” 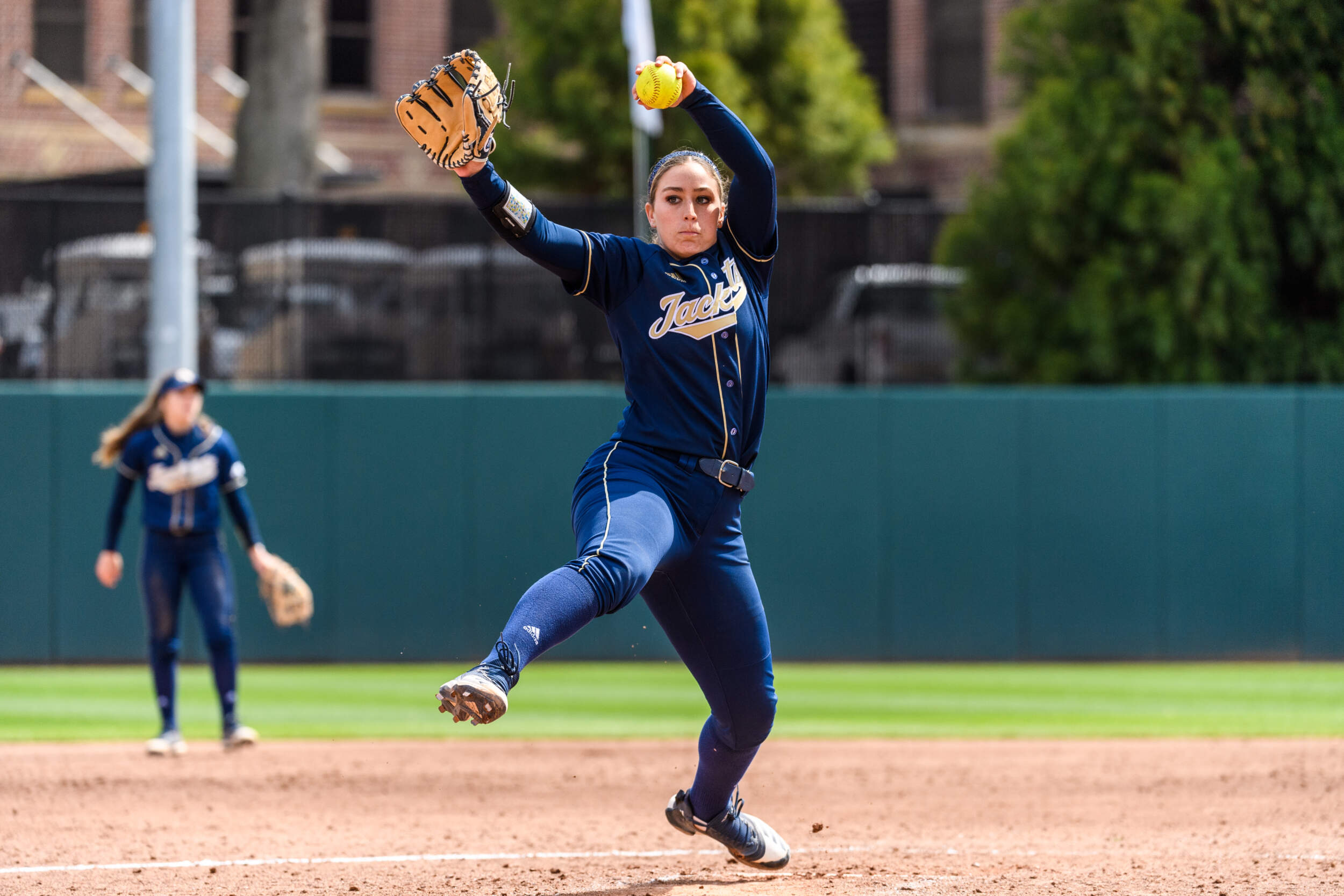 Down in Bradenton, Fla., Breanna Roper and Madison McPherson are happy for the opportunity to play in the first season of FGCL softball. There are 12 teams (16 players per team) in cities from Clearwater to Sarasota, playing a 30-game schedule.

“I thought it would be a great opportunity to stay hot during the summer and not have that little slump when you start getting back into things in the fall,” said Roper. “I think this league gives everyone the opportunity just to stay hot. I love it! When we heard the numbers were rising the whole time I was like, ‘I hope it doesn’t get cancelled. I hope it doesn’t get cancelled.’”

McPherson is in the league because of a different kind of cancellation.

“I was going to do an internship in Australia this summer but it got cancelled due to [COVID-19] going on,” she said. “So then I was like, ‘Hey, this would be a great opportunity.’ I, personally, always wanted to play in the summer but there was never an opportunity for collegiate softball players. I think everything happens for a reason. It’s really awesome to be here with Bre.”

Both players were on a roll when play was halted.

“It was very frustrating because I was hurt most of the season. I was just cleared before (Boston College) so I was getting back into the swing of things,” said McPherson, who finished her first season with Georgia Tech after transferring from Georgia with an 0-1 record but a 1.75 ERA (1 ER in 4.0 innings), holding opposing hitters to a .133 batting average (2-for-15). “I came in in a lot of relief situations and got out of some tough innings. It was just a blast to be a part of that.”

It’s been a blast to be part of the Slice, who started 7-6, including 2-1 against the other Bradenton team, the Lynx — Ryan Moore actually owns both Bradenton teams and owns three in the league (“He says he doesn’t have a favorite team,” said McPherson, “But I’m sure that it’s us. We’re the fun team.”)

Although quarantined, they are living in a Courtyard Marriott and have access to a Square Up Academy, where the players do extra hitting, pitching and weightlifting when not getting ready for games.

Roper has experimented in the field, getting to play third base, while McPherson is working on pitch sequences and sharpening up her pitches. Getting to do so against the top-flight competition they’re seeing — among the schools represented are University of Washington, Louisville, Florida, Central Florida, Wisconsin, and Virginia Tech — is big.

“The competition here has been great,” said McPherson. “We’re getting quality game-time experience, quality competition and it’s truly challenging. I’m really excited to be out here and throwing to some batters during summer.”

They’ve enjoyed playing together and can’t wait to do it again in years to come.

“The softball aspect is absolutely amazing,” said Roper. “It’s so awesome to continue to see live pitching. The relationships we’re building down here are awesome as well.”

“I would do this every summer,” said McPherson. “Every opportunity that I had I would do it. I think that it’s just so good and I would recommend it to anyone who wants to do this.”