Thursday night games can be tricky.

For Georgia Tech, Thursday night’s game against NC State was especially treacherous. Not only was it the second game in a 12-day span, but it came sandwiched between a frustrating loss to Virginia Tech and the excitement attached to Thanksgiving week with Clean, Old-Fashioned Hate waiting at the end of it.

Tech’s 28-26 win over the Wolfpack proved challenging but the Yellow Jackets gave their fans and the primetime ESPN audience plenty to enjoy, in every facet of the game.

“I’m proud of the guys,” said head coach Geoff Collins, who traded in his wizard’s hat as master of mayhem for a chef’s hat as master chef in preparing this recipe for success. “The things we asked them to do all week, accelerate the process, their attention to detail, trusting in the plan, executing the plan at a high level was really, really good. The trust and the care and the belief factor that these guys have shown all season helped us tonight.”

Here’s a brief look at what was on the Thursday night menu. 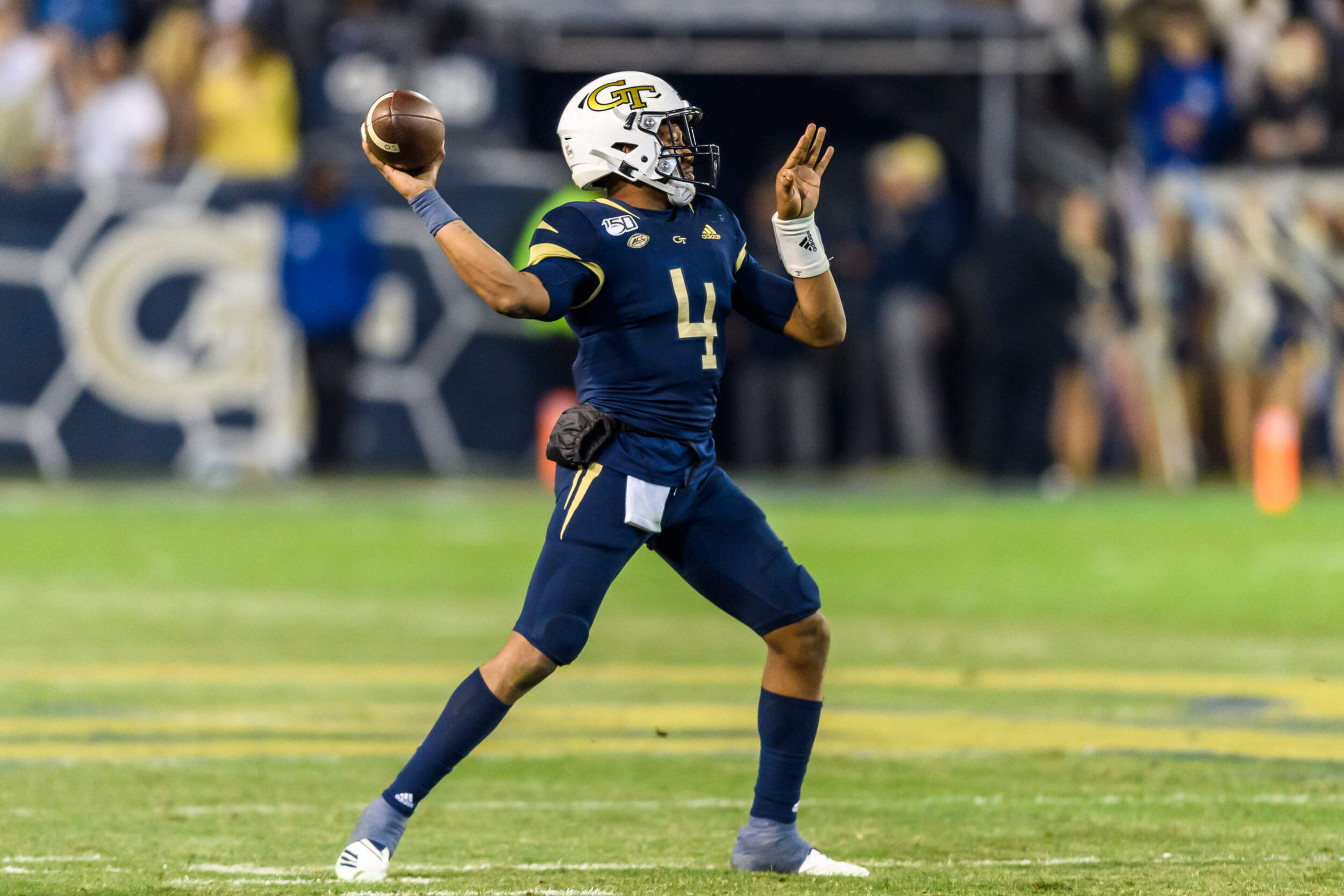 Tech’s offense got the first course out with an efficiency that would have pleased Gordon Ramsey, and was according to plan.

“We asked them start fast and strike first. They did that,” said Collins.

They needed only 76 seconds to get into the end zone, the Jackets’ fastest drive of the season.

Georgia Tech set the tone on the very first play of the game, when quarterback James Graham hit a play-action pass that rainbowed into the arms of Malachi Carter, who blew past the NC State defense and hauled in the bomb for a gain of 54 yards.

“It built a lot of confidence in me,” said Graham of the pass. “It was just me being comfortable in the pocket and the O-line giving me time to throw. I knew first play, we were going to have it wired. I had to give him time to run under it. I didn’t want to overthrow it. I could have thrown it out a little more and maybe it would have been a touchdown.”

Graham completed the drive two plays later, zipping a pass to freshman Ahmarean Brown on the right side of the end zone. It was Brown’s first of two scores on the day and his sixth of the season, pulling him within one of Calvin Johnson for the program record for most touchdown receptions by a freshman. He’d match Megatron’s GT freshman record in the second quarter with the seventh TD of his true-freshman campaign.

Sparked by the impressive opening drive, Graham connected on 6-of-10 passes in the opening half and had a career-best three TD passes before the Jackets went into the locker room with a 21-3 lead. He finished the half with an absurd QB rating of 259.8 and went over 1,000 passing yards for the season, making him the first Tech QB to do so since Justin Thomas in 2016 and the first freshman since Reggie Ball in 2003 to accomplish the feat.

The numbers were nice, but more important was his bounce-back from a disappointing performance against VT and the continued improvement in chemistry with his receiving corps.

“We feel comfortable together,” said Graham. “In practice, we look real good. In the game, we just have to execute what’s called … it’s just showing guys what we can do.”

Carter, whose 54-yard reception on the opening play was the longest of his career, showed no surprise about his QB’s performance.

“I always know James is going to come out there and try to perform the best he can,” he said. “Especially after last week, he had something to prove. So he went out there and did his thing.”

“He’s almost like a DB, where he has a short memory of the bad things that happen to him and is really resilient,” he said. “He just goes out there and tries to execute the next play, the next week, whatever the case may be.”

Along with being a strong performance for Graham, it was an arrival game for the receivers.

“We’ve been waiting for a game to prove what our wide receiver corps can do,” said Carter.

But Collins was equally impressed by what the wideouts did without the ball.

“I said even in the spring — I think our receiving corps, under the direction of Kerry Dixon, has a chance to be really, really good,” he said. “The thing that I was really proud of was a lot of the runs that were hitting were in direct correlation with how well the receivers were blocking downfield and taking pride in that part of their game.” 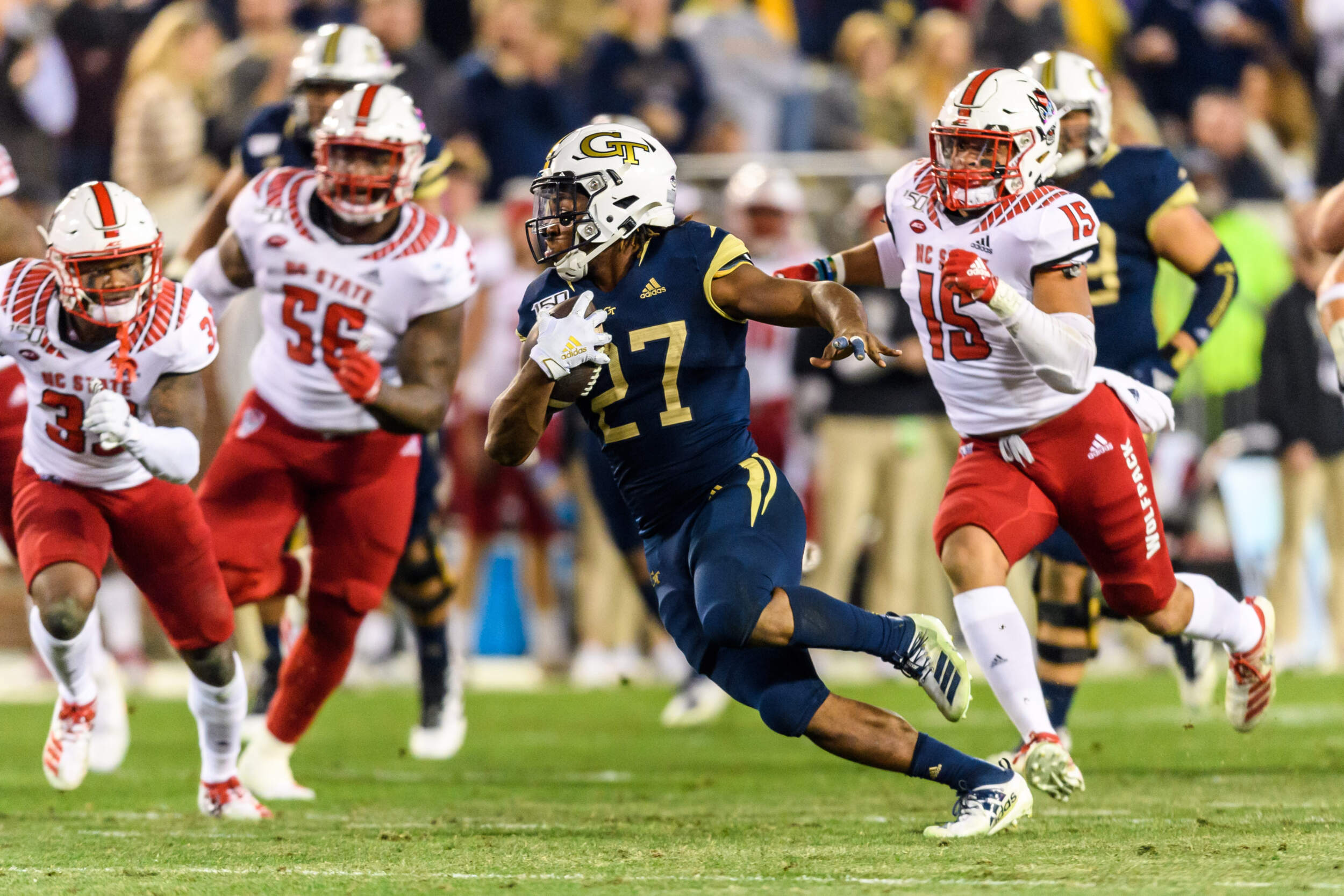 While there was a lot of sizzle in Tech’s offense on Thursday, there also was plenty of steak (or, perhaps, ground beef?). Jordan Mason was the filet mignon, going for a season- and career-high-tying 141 yards (he also went for 141 on Oct. 19 at Miami) on 22 carries. He was at his best on what proved to be the game’s final drive, which melted away the game’s final 5:22. Mason carried on seven of the eight plays prior to the Jackets taking victory formation, punishing anyone in his path that was wearing white and red. The longest of the runs was eight yards, but the cumulative effect of the body shots wore the Wolfpack down.

“The only thing going through my head was run the ball, like ‘Beast Mode,’” he said. “When someone trusts you with the ball, you’ve got to do what you’ve got to do to be trusted. So I just give it to the O-line. They did their thing. They got me to the second level and I just did my thing.”

This, too, was according to the plan of Collins and his sous-chef, offensive coordinator Dave Patenaude.

“We told the O-line all week, ‘Get J.P. three yards and he will do the rest,” Collins said. “He did it, even more so that last drive.”

Mason showed his big-play ability early, taking off on a 48-yard jaunt in the first quarter. It was the longest running play of the season for the Jackets.

He and Graham proved a devastating 1-2 punch on the ground, as the Jackets’ quarterback added to his outstanding passing night with a career-best 112 yards on 14 carries. Included in Graham’s yardage was a 26-yard burst up the middle for what proved to be the game-winning points with 5:08 left in the third.

Collins liked the TD run, but loved how Graham’s sense of smell had expanded beyond his ability to find the end zone.

“A lot of times this season, when James has been in the open field and getting close to that first-down marker, he hadn’t had awareness of where the sticks were,” he said. “Tonight, you could actively see him seeking out the first-down markers, getting the first downs for us, keeping the chains moving. I’m really proud of the development of him as a player that way.” 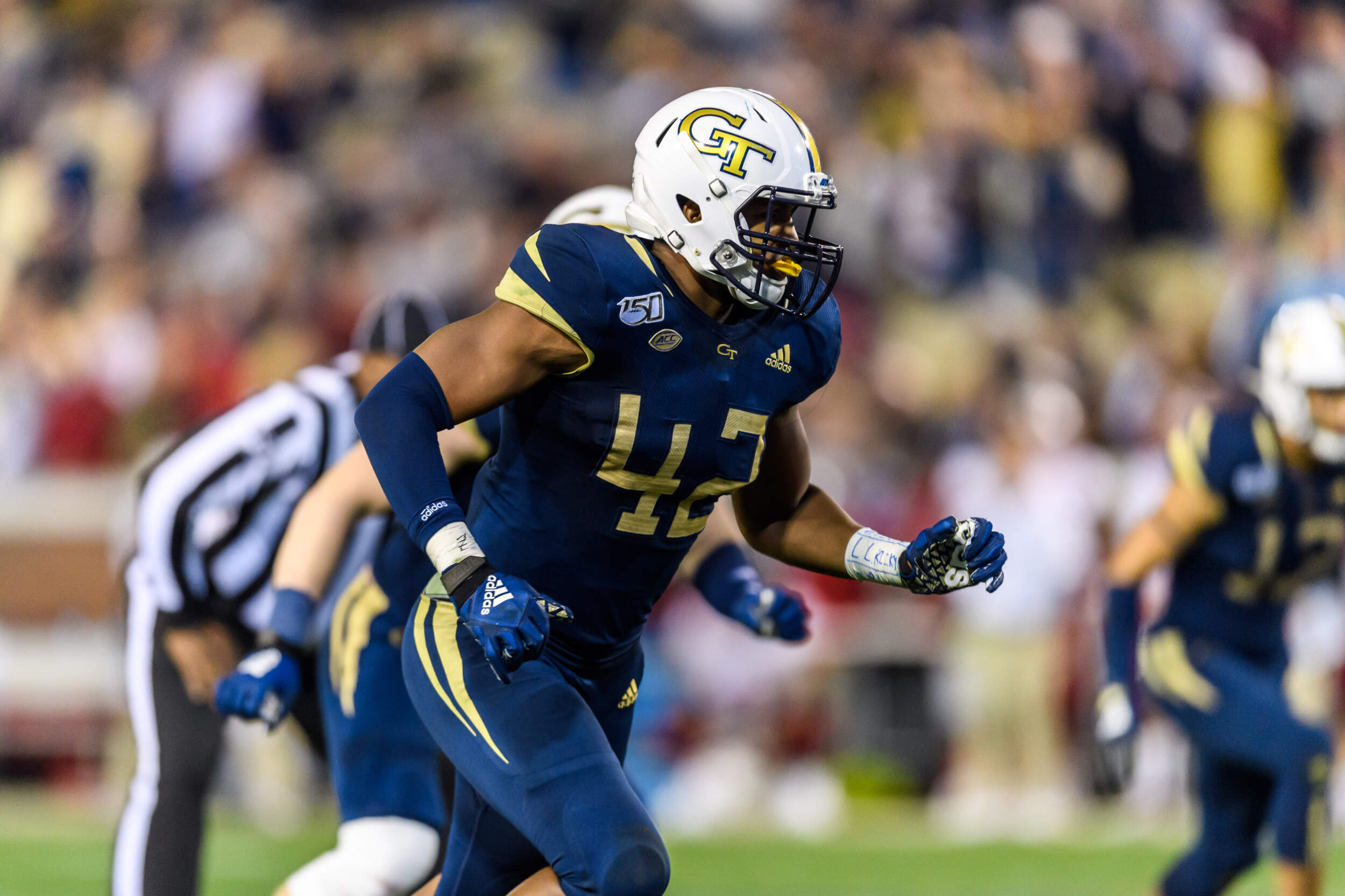 Jordan Domineck had a career-high 10 tackles in Thursday night’s win over NC State.

No unit has been hit as hard by injuries as Georgia Tech’s defense, especially its defensive line. That’s why the defense’s performance Thursday night was so sweet. When it mattered the unit came through. No what-if’s this time.

The Jackets came up big on the Wolfpack’s first series, preserving the 7-0 lead by stiffening in the red zone. The key play was redshirt freshman defensive lineman Jordan Domineck blowing up the fourth-and-2 play, turning back running back Zonovan Knight for a loss of one and that turned the ball back over to Tech’s offense.

The Jackets similarly stymied the Wolfpack in the red zone in the second and third quarters, both times forcing field goals, which proved invaluable in the two-point triumph.

After managing just three points in the first half, the Wolfpack moved the ball after halftime and scored on all four of its second-half possessions, but never equalized. Safety Christian Campbell made sure of that on their last gasp. With 5:17 remaining, State scored, cutting the deficit to 28-26. But on the would-be game-tying two-point conversion attempt, Campbell stepped up, blazing in and pressuring NC State QB Devin Leary into a desperation throw that sailed out of the end zone.

“[Defensive Coordinator Andrew Thacker] called a safety pressure and they did a roll-out, so he was running away from me,” Campbell recalled. “As I was pursuing him, he tried to stop and throw it back across field. He had no idea that I was behind him. So as soon as he turned to square up, I was right there in his face.”

A variety of faces did the job for the Jackets, especially up front, where Domineck made a career-best 10 stops (5 solo). T.K. Chimedza chipped in with six. In the secondary, Zamari Walton also made six stops (5 solo).

“You love to see it. It’s like Coach [Collins] says, we do the ATL, which is ‘Above the Line,’” said Campbell. “Everybody that’s on that list, we trust to go in. So I was glad that some people got a chance to make plays. It was good for us, good for the team and good for them, personally.”

“I’m really proud of [the defense]. The resolve, the resilience,” Collins said. “Our philosophy in this program is, ‘Next man up.’ We’re going to put the ball down and play the next play and roll guys in.” 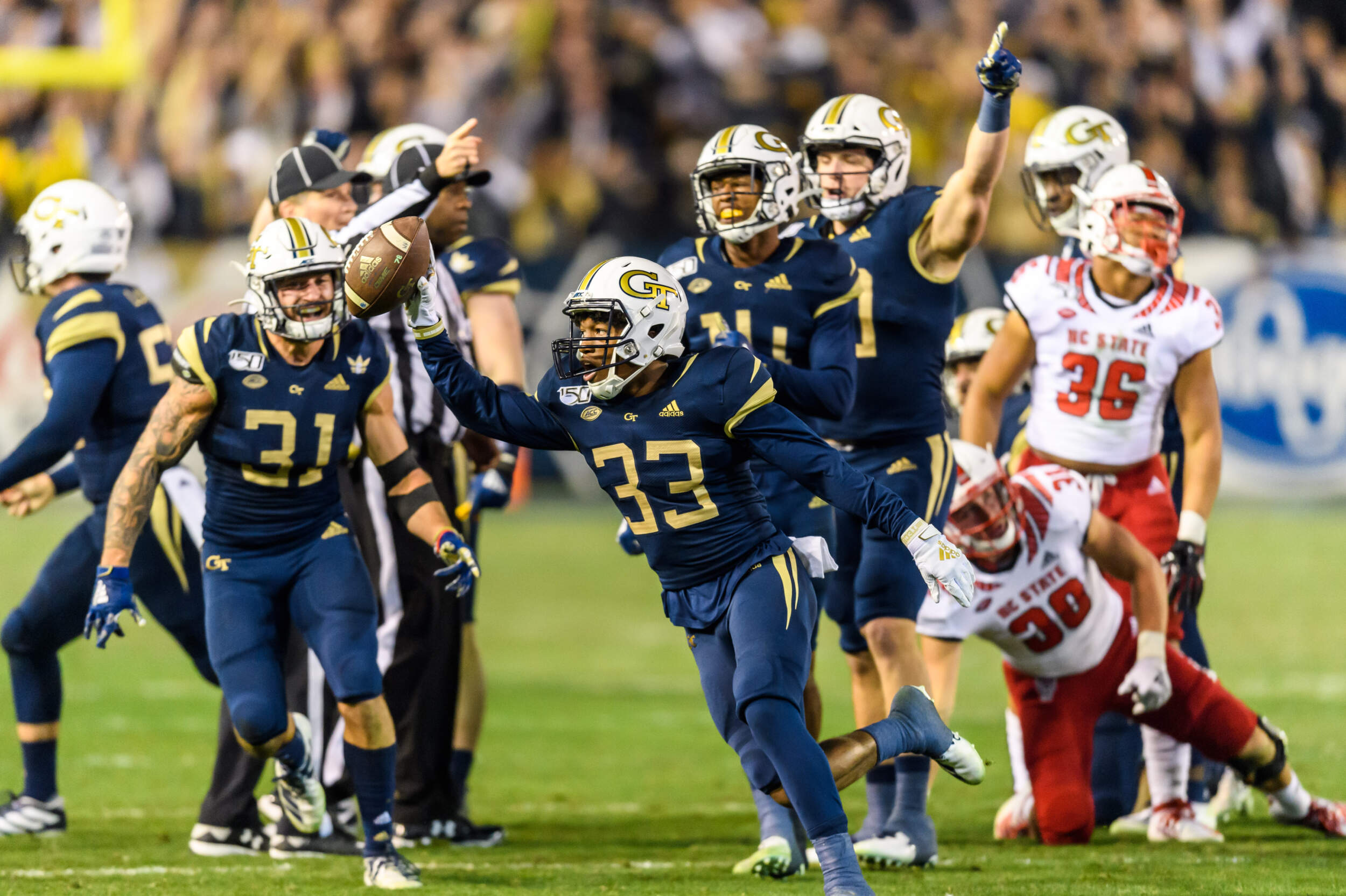 Jaytlin Askew celebrates with his teammates after recovering a fumble late in the second quarter that helped Georgia Tech take a 21-3 halftime lead.

The Wolfpack was pinned back all night, with their best starting position being their own 33 and that was only after recovering a fumble.

“Special teams, a lot of times, is the most important side of the ball,” said Curry. “Pressley always kicks the [heck] out of it, which is awesome. Then kicking [off] into the end zone, and they fair-catch it, they can’t return it for any yards. So that’s always a big part of the game.”

Collins saw beyond the kickers, crediting gunners Jaytlin Askew and Nathan Cottrell for their relentless pursuit of the ball. On Thursday, that pursuit resulted in Askew recovering a muffed punt at the State 31. The ensuing drive resulted in a the late second-quarter touchdown and a 21-3 halftime lead.

Next up is Georgia. The Jackets like where they are heading in.

“It definitely gives us some momentum to ride,” said Campbell. “It’s always better going into a game off a win than a loss.”

“One thing we do as a team is we stay in the moment,” said Carter. “Coach always preaches that. Tonight we’re going to celebrate this win and next week we’re going to focus on Georgia and put this behind us.”