Something special is happening at McAuley Aquatic Center.

It’s more than just the 2019 Toyota U.S. Open National Championships beginning there on Wednesday and running through Sunday (you can stream it on usaswimming.org and watch the A Finals on Saturday and Sunday on nbcsports.com).

The USA Swimming feature event, formerly known as Winter Nationals, is a big deal and Georgia Tech’s hosting it speaks volumes about the splendor of the facility and renown for the Institute.

But there is another energy within that facility that goes beyond perception. An energy that can’t be measured in BTUs or any actual units. It’s the positive energy deriving from the chemical reaction within Georgia Tech swimming and diving.

“I think this is the most close-knit team we’ve had in years,” said senior Emily Ilgenfritz, who broke a pair of school records at last weekend’s Georgia Tech Invitational, including her own 500 freestyle mark as well as the 1,000. “We’re very supportive of one another, we push each other in practice every day, we take criticism well from each other. I think it’s just a great group of hard-working individuals and the way that we swam at the Invite, we set ourselves up very well for the end of the season.”

Head coach Courtney Shealy Hart praised the entire team for its performance in the Invite during which the men finished fourth while the women finished fifth, shattered three school records and setting 36 personal bests.

“I think this was the best Invite top to bottom, men and women, that I have been a part of in my 13 years here,” Hart said. “I hate naming names because I know I’m going to miss some people because I truly was proud top to bottom of how everybody did and stepped up and competed against some of the best teams in the country.”

“The thing that impresses me the most is that we had a lot of lifetime- and season-best times,” she added. “It’s hard for me to pick out just a couple of people because I was really proud of the great performances from all different classes, both men and women. I was super proud of the way we competed. We, obviously, bring very tough competition in here every year. I’m super excited not only with what we’ve done so far but what the rest of the season looks like.”

The team certainly enjoyed the proceedings, especially doing so in the rocking atmosphere of their home pool.

“It was so much fun, having everyone cheer you on. The team as a whole did amazing. Everybody had great swims and the support, it was good,” said freshman Brooke Switzer, who won the C Final in the 200 free and was part of strong performances in the 400 free- and 800-free relays. “We have a great facility. I’ve swam in some pretty bad pools and this one’s really good. Being able to host the U.S. Open — I think that’s pretty awesome to be able to train here every single day and call this home.” 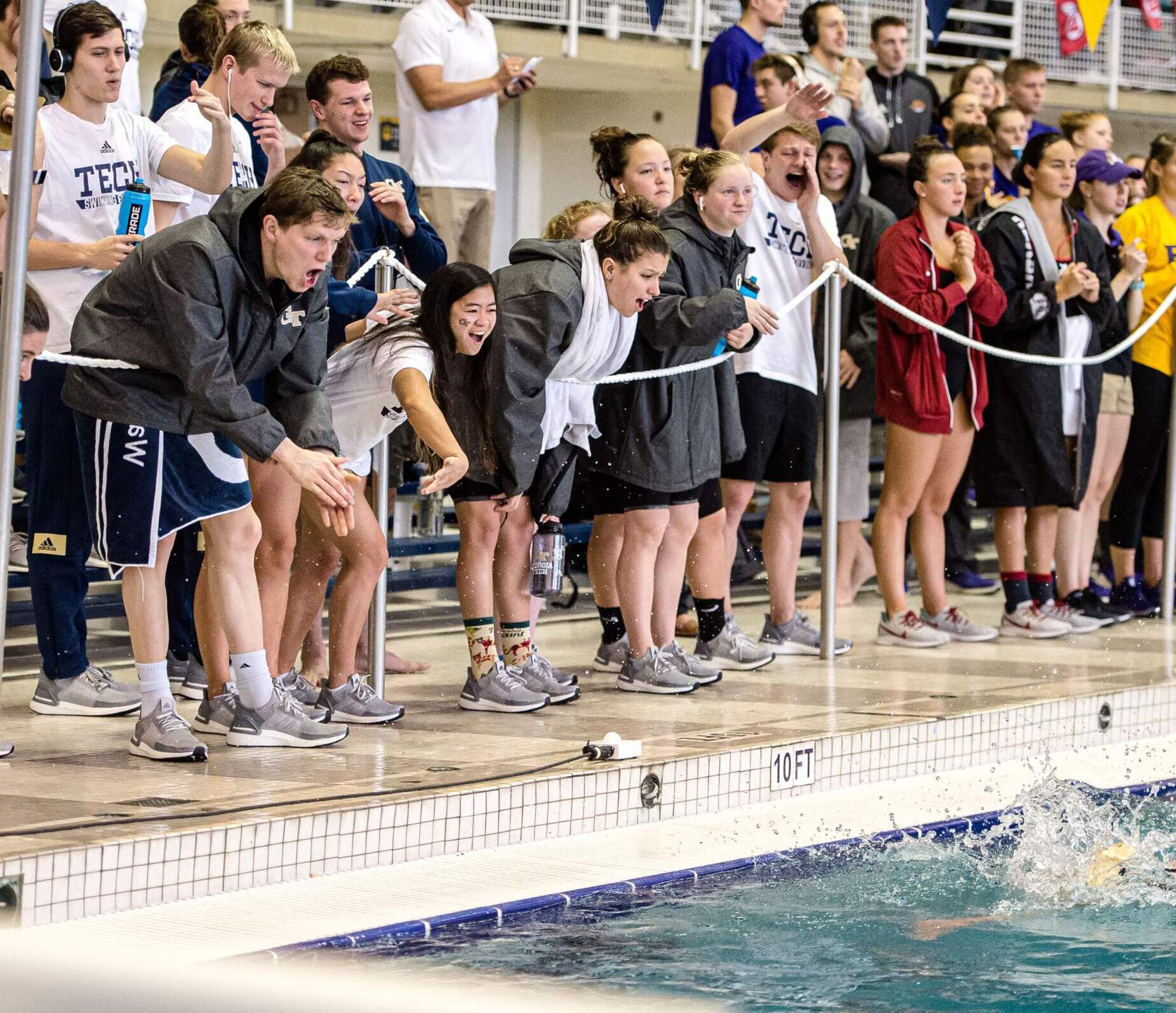 Some of the best swimmers in the world will find out just how awesome it is to swim in McAuley this weekend in the Open. The Jackets will be well represented, as 22 student-athletes (15 men, seven women) will participate in 14 different events.

Hart sees nothing but positives in Tech holding the event.

“It’s awesome, not only for our student-athletes to be able to compete here and not have to travel, but it’s also awesome from a recruiting perspective, to bring all of the people from all over the country in to our wonderful facility and get to show that off,” she said.

The Jackets plan to show off the kind of spirit and unity that sets this team apart from past years. It not only includes, but features, a strong group of first-year swimmers that are freshmen in class only.

“One of the things that impresses me the most is they’re not intimidated by tough competition. That’s something that’s really hard to teach,” Hart said. “You have to kind of come in with that so we’re looking for student-athletes in both swimming and diving that come in, that want to compete, that are tough. So it’s great to see that they are able to impact us right away as well.”

Not only are they impacting the team, but their hard-nosed, fearless approach is pushing the upperclassmen every day.

“When you see a freshman coming up and he’s trying to beat you in practice or during a meet, you don’t want to lose to a freshman,” said junior Caio Pumputis, with a laugh. “So I think it’s good. You push yourself more and more and that’s a fun competition, for sure. All the freshmen have brought that to the team this year, and it makes us swim even faster than we used to. I think we’re going to do way better at ACCs and bring more people to NCAAs than last year. So I’m excited to see what we have for next semester.”

Hart likes what she’s seen from a morale standpoint.

The freshmen have noticed and are thriving in the atmosphere.

“The team has been super inviting,” said freshman McKenzie Campbell, who has been one of the Jackets’ top performers so far this season in the fly and IM events. “Seeing at the Invite, both the men’s team and the women’s team coming together, it was super energetic. Everyone was always up and cheering. I think that’s a large part of why we had such a successful meet. Since I arrived on campus everyone’s been so welcoming and not only pushing me in practice but also asking how school’s been going and making sure I’m there emotionally and making sure I am transitioning well into college.”

“The entire team was very supportive,” said freshman Ruben Lechuga, the high school national champion at 1-meter last year, who won gold in the event at the Invite — he missed a program record by two points — and will enthusiastically be in attendance as a supporter in the swimmers-only Open. “I had a good time cheering all the divers and the swimmers. I think my performance and the whole team’s were pretty good. I felt pretty good, also, because the whole team was cheering me on. It helped.”

Helping and pushing each other will be paramount this weekend, then really be important beginning on Dec. 14, when the team heads to Hawaii for 10 days of workouts and team-bonding.

“We’re going to put in some really good training there and continue to build as a team, away from Atlanta, away from the Tech campus and continue to work hard and build,” Hart said. “January will be here before we know it and then February is, obviously, ‘Championship Season.’”

But the trip is about more than just improving in the pool. There is improving the total person.

“We are going to offer some historical adventures, whether that be Diamond Head or Pearl Harbor,” Hart said. “We’re going to make some of those options available because it’s important that you at least have the opportunity, if you travel, to get to see a little bit of the culture.”

But first there’s taking care of business at home. As much as Hart will be watching her student-athletes performances in the Open, she’ll have an even more trained eye on the team’s performance during finals week.

“We’re really just kind of racing through this meet. The focus is finals for us and just another great date to race in,” she said. “We want to finish up well academically. I’m really proud of the way our team performs academically. We’ve been the top in the athletic department – the women have been the top the past three semesters, the guys have been one or two the past three and four semesters. They are student-athletes so it’s really important they finish off this semester well academically.”

During the trip to Hawaii, the team will work out with the University of Denver and University of Hawaii (which will also be in finals). It promises to be great preparation for “Championship Season.”

“I’ve been looking forward to that since July when we first found out about it,” said Ilgenfritz. “It’s always great to train in a new place, a new environment. The team-bonding part is always great, too. We do the Winter Olympics and have a bunch of games and friendly competition. It’ll be great to train hard in a fun environment for 10 days.”