THE FLATS — Cole Gromley will step out of his element this week when he makes his professional tennis debut in a match against Frenchman Ugo Humbert on Tuesday night at the BB&T Atlanta Open, but Georgia Tech’s rising sophomore will be surrounded by the familiar faces and in known places while he grows his game.

He said that the primary focus in his first year as a collegiate player was on “the mental” aspects of his sport. The Norcross native is getting a chance to continue that work thanks to Atlanta’s lone professional tennis event annually handing out one collegiate wild card entry into the main draw at Atlantic Station, just north of the Tech campus.

That wildcard alternates years between players from Tech and the University of Georgia who hail from Atlanta. It’s a current Jacket in every odd-numbered year, and Christopher Eubanks drew the nod in 2015 and ’17.

Eubanks and former Jacket Kevin King are both in the BB&T field, too, in doubles and singles, respectively. Tech head coach Kenny Thorne also will be in the crowd when Gromley on “College Night” faces Humbert, a 21-year-old lefty who is ranked No. 46 in the world. 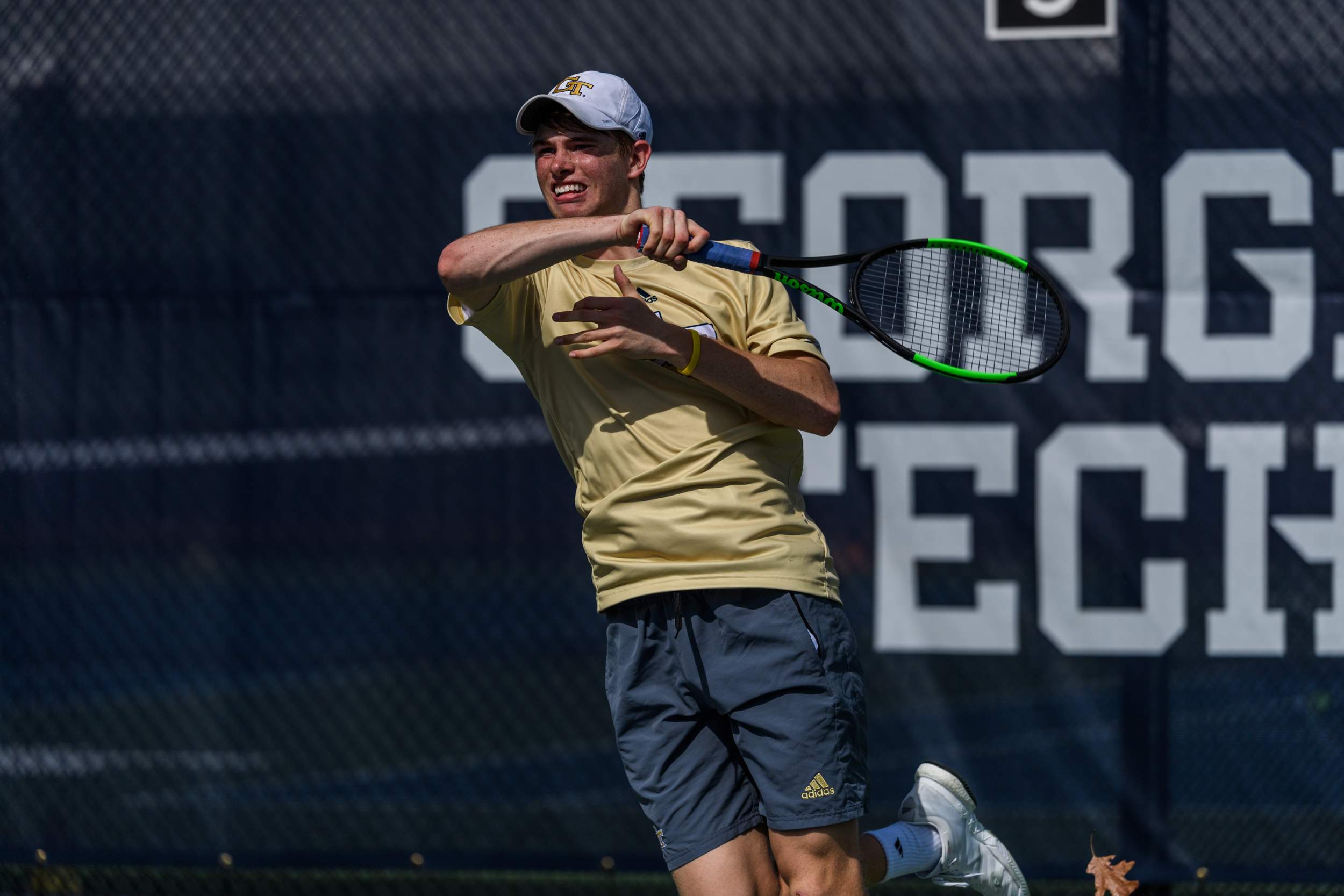 Thorne is delaying multiple recruiting trips in the U.S. and overseas to watch Gromley, King and Eubanks play against some of tennis’ big boys.

“I think you’re put in a position where you’re playing guys that you’re watching on TV, and anytime you’re watching somebody on TV, you’re building them up in your mind,” Thorne said. “The benefit is that you learn you can play with them. Also . . . the crowd, [media] interviews, things that surround a pro tournament that these guys don’t usually get to experience.”

Gromley, who built a 12-9 singles record as a freshman by winning six of his final eight matches, won’t be staying at home to play near home. He moved out of his dorm in early May, and has been living at home, although he practices often at Tech. Players are staying at the 12 hotel, in Atlantic Station.

“I’m really excited . . .” he said. “I feel like it really gets me used to the professional atmosphere. It’s a lot different than any tournament I’ve been to.”

Gromley, in fact, never played outside of the U.S. until earlier this summer, when he went on a European tour with rising UGA sophomores Blake Croyder of Marietta and Britton Johnston of Snellville, whom he grew up competing against.

There are typically notable Tech and UGA contingents at the BB&T Atlanta Open, which former Bulldog Jon Isner has won five times, and this year will offer as many opportunities as ever for Jackets fans to cheer the 32-man ATP event.

King fought through qualifying over the weekend to win a main draw match against Bulgarian Grigor Dimitrov, who is ranked No. 53. He was ranked as high as No. 3 in 2017.

Eubanks, who earned the college wildcard in 2015 (in both singles and doubles) and ’17, also earned a non-collegiate doubles wildcard in 2016 with former Georgia State standout Zackery Kennedy, who earlier was a teammate at Westlake High School.

His first professional victories in both singles and doubles came at Atlantic Station, and he and Atlanta’s Donald Young advanced to the semifinals in doubles in ’15 before falling to No. 1-ranked brothers Bob and Mike Bryan. 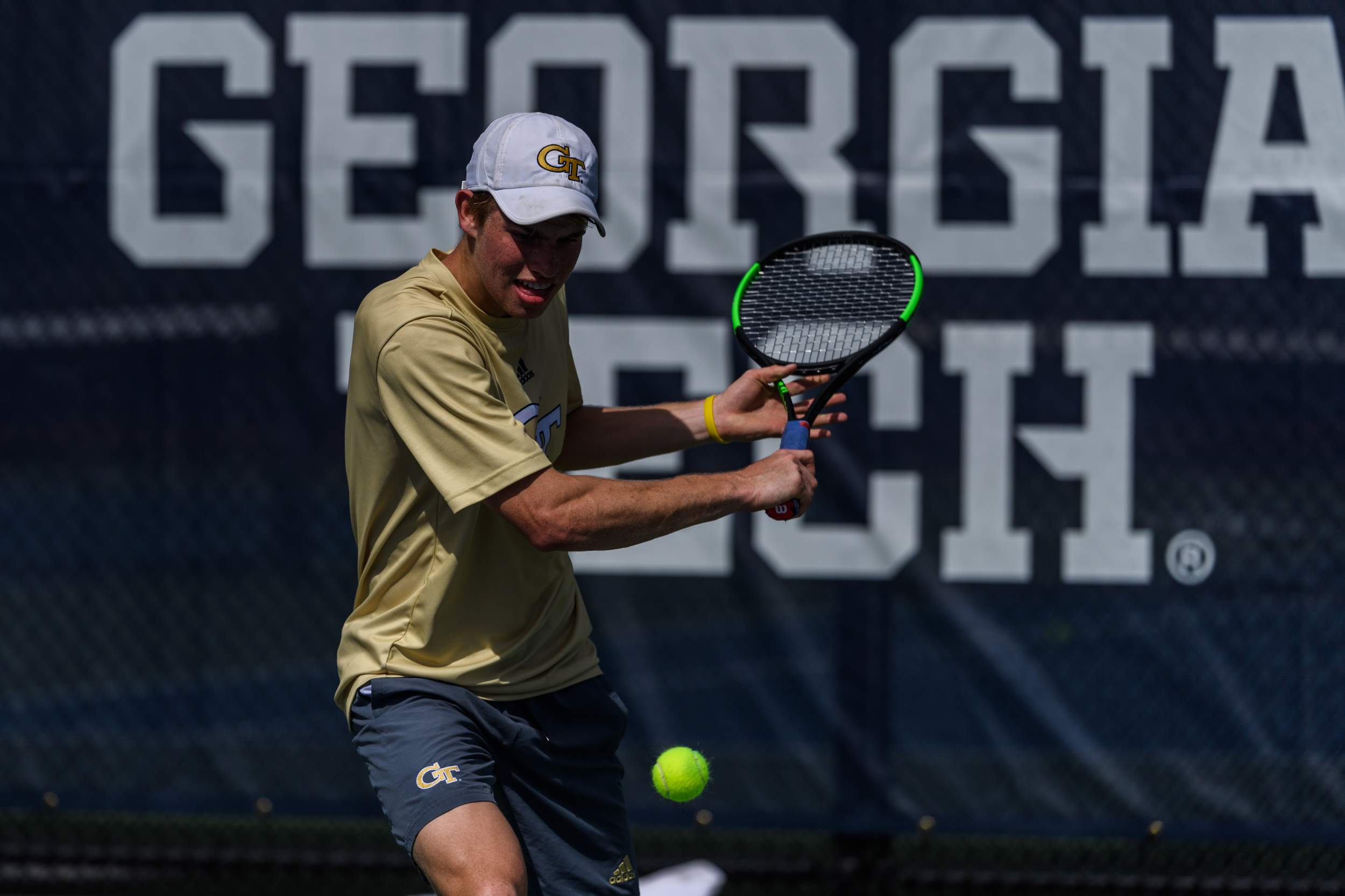 Gromley is looking for a similar launching pad.

He arrived at Tech with a left wrist injury that slowed some of his progress, and even forced some changes in his playing style. That and dialing in on the nuances of his game dominated his approach last school year.

“I think what I was trying to improve the most was the mental aspect. There were some big ups and downs,” Gromley recalled. “After a bad match or two, the older guys would come and talk to me. Coaches, I would meet with them in their offices. I think tennis-wise it will be my backhand that I will work on most the coming year.”

Thorne is looking forward to watching.

He’ll soon leave for the European junior championships, return to the U.S. to make in-home visits to active recruits and then travel to the Midwest for one of the very biggest domestic junior tournaments. But first, he wants to watch Gromley, King and Eubanks.

“I watched Kevin all weekend [in qualifying],” Thorne said of the Peachtree City native. “Kevin’s got a great story. Saturday was the first time his dad [Bill] has seen him play in two years. He had a stroke, a really bad one, and it was really the first time to get outside of the house.

King is ranked No. 405 and it’s a big deal that he made it through qualifying in his hometown tournament. He’s helped coach Gromley before. Maybe he and Eubanks will help coach him this week.

Christopher, who is ranked No. 184 in singles and No. 287 in doubles, played Humbert in Brisbane International qualifying several months ago, falling 2-6, 3-6. Eubanks has made qualifying at all three Grand Slam events this year, in fact, and won three matches in qualifying after Brisbane to qualify for the Australian Open, where he fell in the first round.

Perhaps Thorne will have to encourage the conversation because Gromley’s not the most talkative young man.

“Cole jumping from being a freshman and having a good year where he started well, had some struggle midway through the year, and then finished strong to a pro tournament . . . that’s good . . .