THE FLATS — Some athletes have an “It” factor about them. It makes them especially fun to watch because every race holds the potential for them to do something amazing.

Georgia Tech rising junior Caio Pumputis is one of those athletes.

His fellow Yellow Jacket athletes recognize it. It’s why they named Pumputis Co-GTAA Male Athlete of the Year with Baseball’s Joey Bart, at the annual Yellow Jacket Celebration.

Caio, who is in his native Brazil training for the 2019 World Aquatics Championships that will take place July 12-28 in Gwangju, South Korea, has made putting on thrilling performances the norm, pretty much since he arrived in Atlanta. He was at his thrilling best during the 2019 D-I Men’s Swimming Championships. 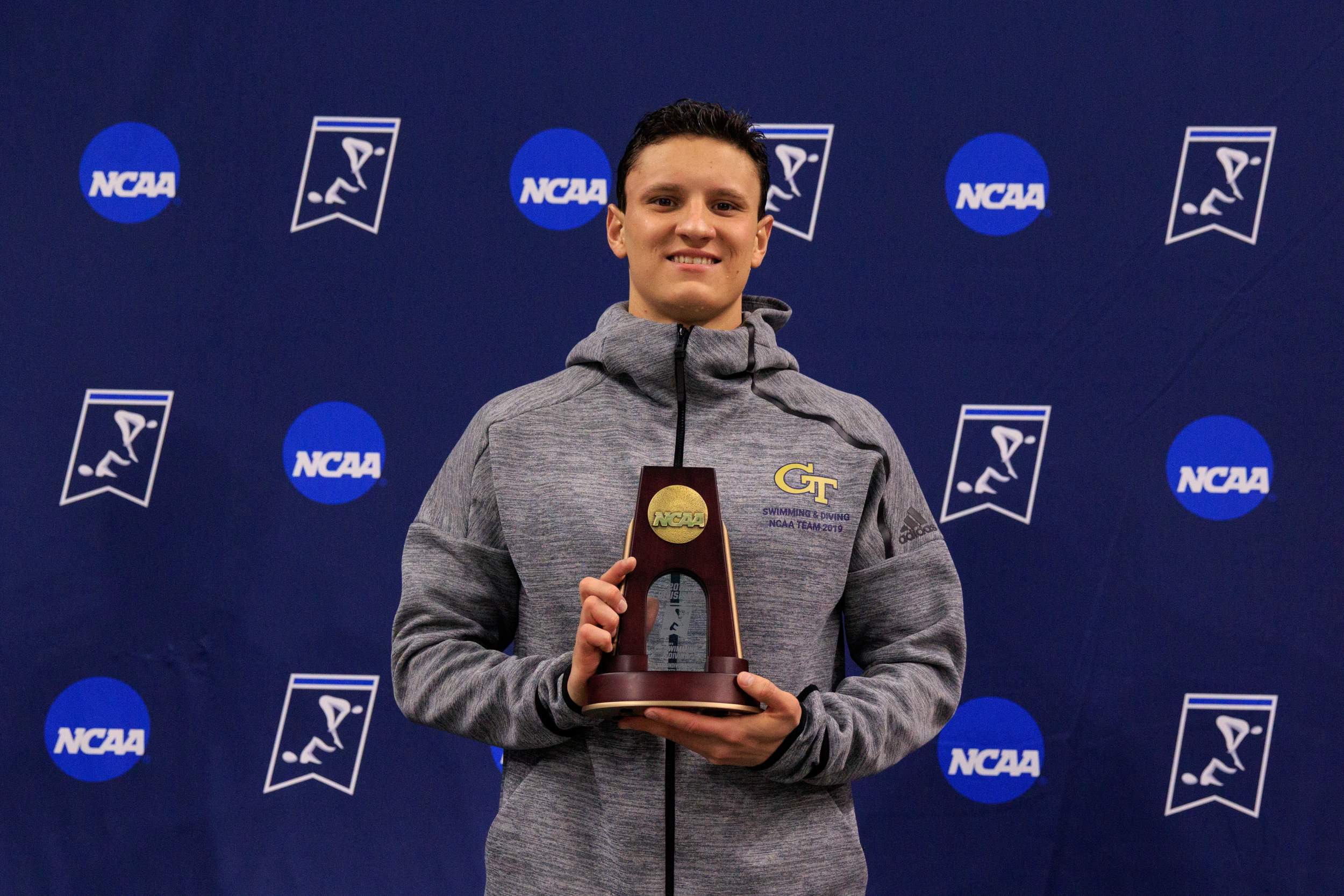 Pretty cool stuff and almost enough to meet his expectations for the meet.

“(My coach and I) had good expectations heading to the meet,” he said. “Our goal was to, A, make the final in all my three events. Time-wise I achieved two out of three goals. The only event I thought I could go faster was 200 breast. I wasn’t expecting to go 51.3 in the 100 breast. So, I would say that made me proud.” 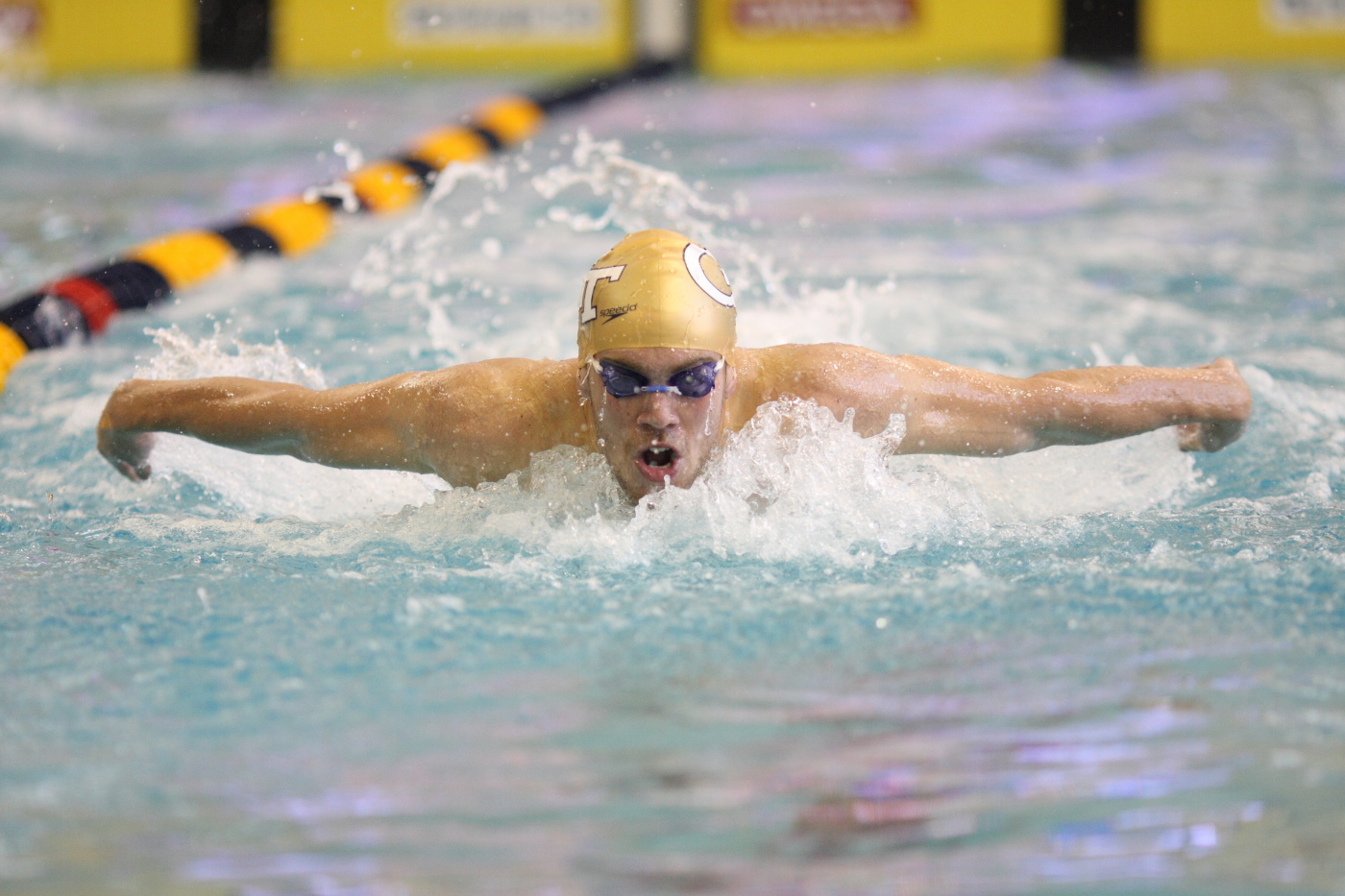 There IS the historical aspect. , which began on Thursday, March 28, with a sixth-place finish in the 200 IM. He became the first Yellow Jacket since Andrew Kosic at the 2015 NCAAs in the 50 free to record individual First-Team All-America honors. The next night he, again, recorded a sixth-place finish, this time in the 100 breast. His second First-Team All-America honor put him in the company of the legendary Gal Nevo, who was the most recent Jacket to record two top-eight finishes at the same championships, doing so in 2010. Finally, Saturday night, Pumputis made history by breaking the school-record in the 200 breast and earning his third top-eight finish of the week. His 1:50.70  surpassed Moises Loschi’s program-best 1:53.08 set in 2017, and put him alone in program history for most All-America performances at one NCAAs.

It was quite a three days for Pumputis, who admitted he felt locked in as early on as the first 200 IM prelims.

“I was feeling good since the beginning,” he said. “It made me feel more confident for the rest of the meet. I was focused 100 percent of the time and I knew I could go best times in all three of my individuals events.”

The times and finishes were eye-opening as Pumputis had swam the same events at last year’s NCAA’s but didn’t crack the top 30 in even one event — he was 34th in the 100 at 53.53, was DQ’ed in the 200 and was 36th in the 200 IM with a 1:45.54). He credits this year’s improvement at nationals to growth, maturity and a general comfort of the parameters of swimming in the U.S. 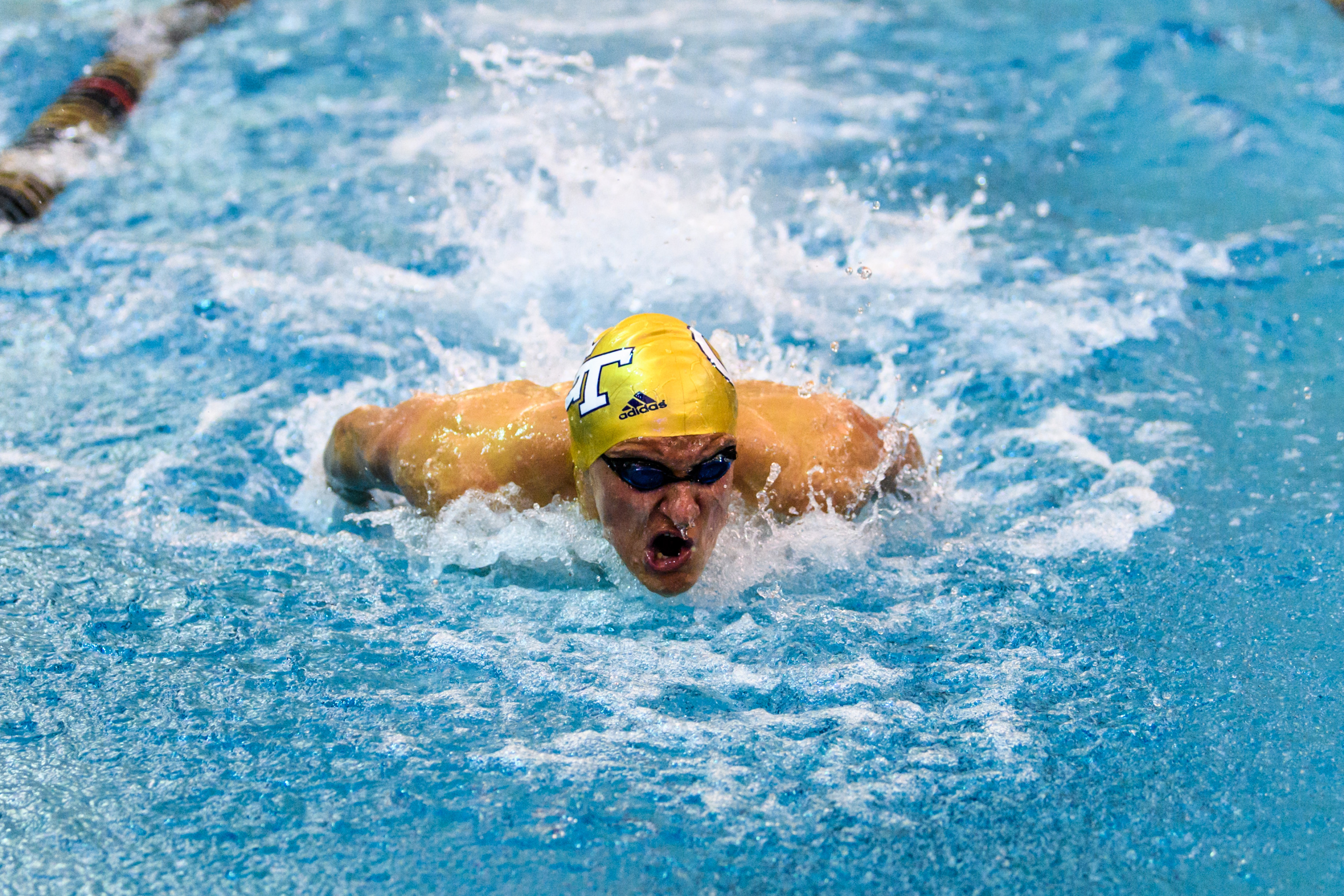 “That was my second year swimming short course yards,” he said. “I am 100 percent sure that I can swim way faster on the next two years. We are always looking for improvement and there is always something that we can develop.”

“International meets, like Worlds and Olympics, can be seven or eight days so coming from that to a three- or four-day meet, like NCAAs, I didn’t see that as a big challenge,” said Nevo, a three-time Olympian. “The excitement in NCAAs and ACCs is so high and so you’re kind of riding that wave of good vibes. Of course, it depends, if you’re doing well as well, you need to be part of this party. If you don’t do well it’s even harder in meets like NCAAs because you know the team is building expectations on you. But once it goes well, it’s not that long a meet that you need to find ways to sustain the tension. The excitement and the whole team atmosphere can really take you forward.” 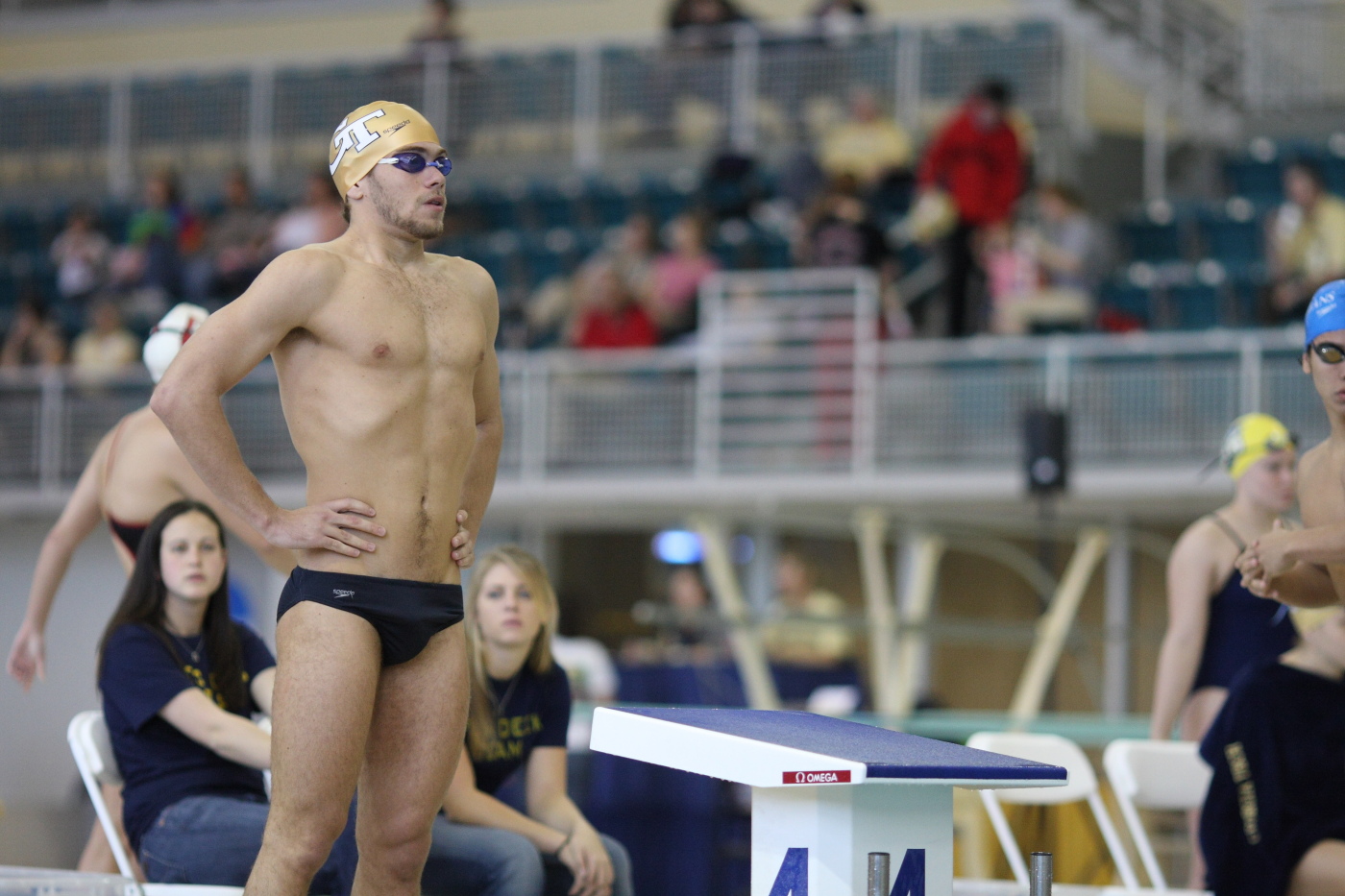 Nevo, who is living in Israel, has retired from competitive swimming, but is still very much involved in the sport. He and a colleague are in the process of developing a software program called SenSwim (see https://www.senswim.com/), which will attempt to measure every parameter of swimming, from time, strokes, underwater speed, using one camera that’s shooting in real time and give coaches and swimmers feedback about time and strokes and underwater. (“Hopefully that will change the whole way swimming workouts are conducted,” he said,). He is still a very big follower of the Yellow Jackets and thus has become very much aware of Pumputis.

“I was following Georgia Tech Swimming pretty much all year,” he said. “I saw Caio breaking my records even before the NCAAs. I was pretty happy about that.

“I’m happy as long as he leaves me one record. Just don’t break ALL my records.” he added, with a laugh. “I’m happy Georgia Tech is moving forward and records are breaking. It’s fun to see.”

Nevo’s lone program-record remaining is the 400 IM (3:38.00 in 2009), something Pumputis, could challenge should he take on the event, especially as he continues to mature and get stronger. It’s a possibility of which Nevo not only is aware, but, with SenSwim, actually could help make reality!

“That would be perfect,” he said. “As swimming develops and progresses in Georgia Tech and the world, my BEST times aren’t even worth even a final. He’s only a sophomore and he’ll do great, great things. I’m sure.”

The two have never met in the pool, nor in person, but did meet via text shortly after NCAAs. It meant a lot to Caio and inspired him.

“After NCAAs I received a text from Gal saying, ‘Good job,’” he said. “I really liked it. He was a great swimmer for Tech and I am on the same way. One day I want to send the same text message to a guy that is breaking my records.”

One area in which Pumputis hopes to at least match Nevo is in Olympic appearances. Nevo was a three-time Olympian, representing Israel in 2008 in Beijing, 2012 in London and 2016 in Rio. While Pumputis aspires to make it with his native Brazil, it’s not his top priority right now. First up are the Worlds in South Korea, then the Pan American Games, from Aug. 4 through 10 in Lima, Peru.

He took positive steps in that direction at the 2019 Maria Lenk Trophy, Brazil’s National Championships.

Still, he’s not quite ready to discuss 2020 Tokyo Games.

“One step at a time,” he said. “I am going to Brazil and practice until World’s. Then, I am heading to Peru to compete in the Pan American Games. After those two important meets, I will definitely focus on my preparation for the 2020 Olympics.”

He’ll have plenty of eyes on him as his career goes on — especially a pair in Israel. 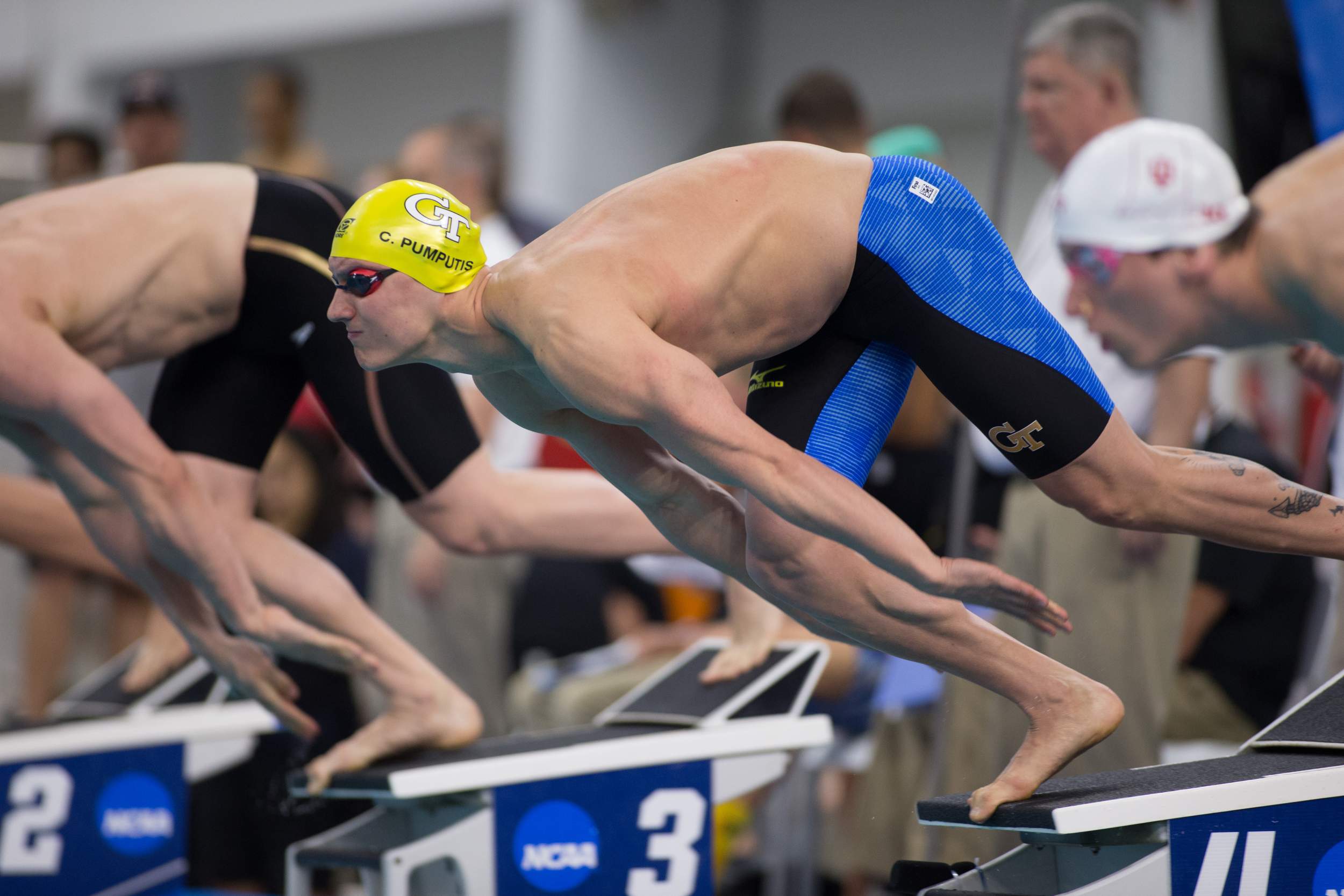