With Tuesday’s news that Georgia Tech will play one football game per season in Mercedes-Benz Stadium for five years, beginning in 2020, the Yellow Jackets hope to elevate their brand, boost recruiting and bump finances.

This five-game series is the merger of motive, opportunity and experience – in reverse order.

The seed was planted when the Jackets played Tennessee in MBS in 2017 to cap the venue’s opening weekend. Although the Vols squeaked out a 42-41 double-overtime win, many in the sellout crowd of 75,107 enjoyed the evening in the well-appointed stadium with fancy video boards, restaurants and more.

“The Chick-fil-A game against Tennessee . . . was an incredible experience and one that we felt that given the opportunity we’d like to be able to do on a more regular basis,” Georgia Tech director of athletics Todd Stansbury said. 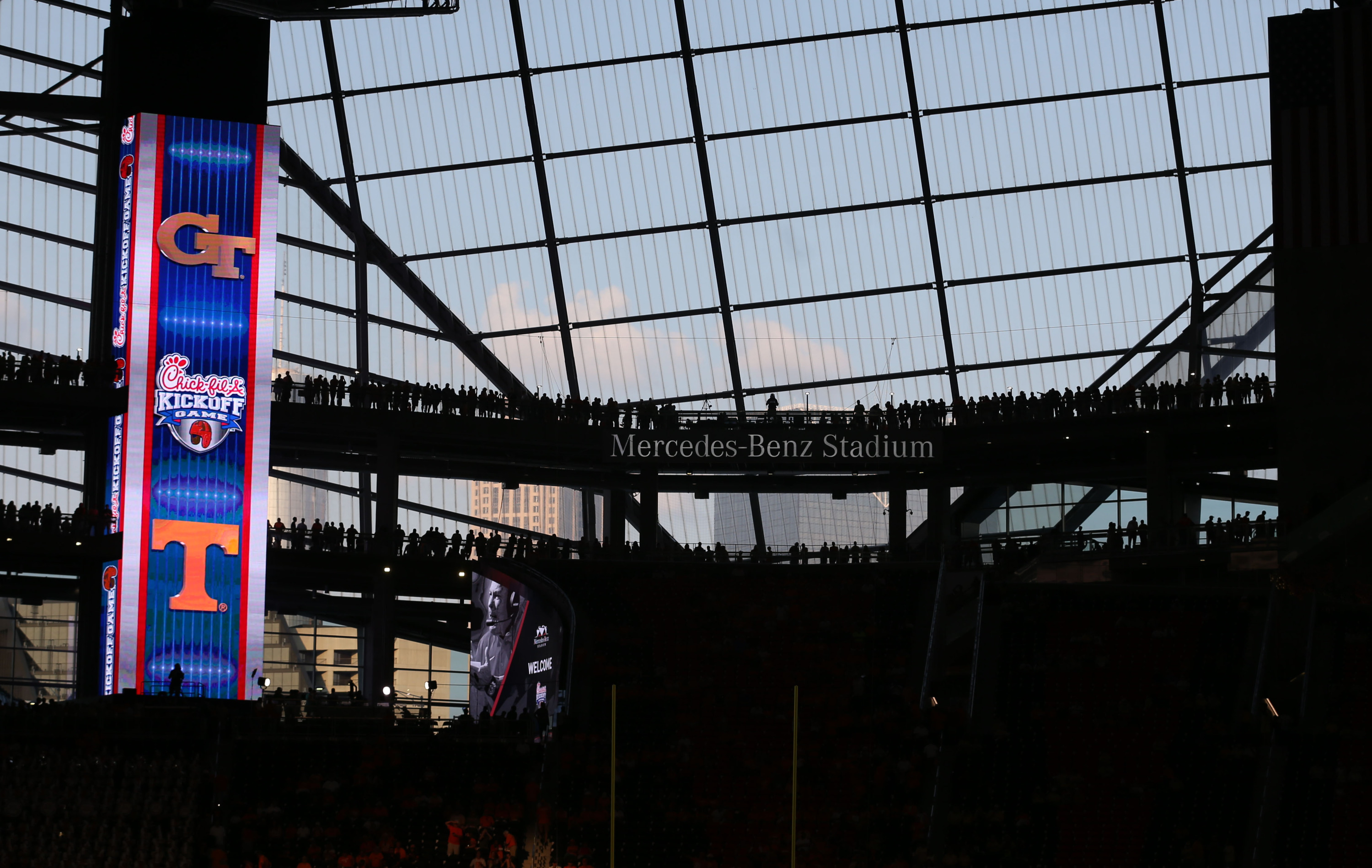 As for opportunity, with one of college football’s most iconic brands slated to visit Atlanta next year, “we looked at our schedule and saw that Notre Dame would be coming to town in 2020, that’s really what started us thinking about the possibility of moving that game . . . to Mercedes-Benz,” he explained.

Which leads to motives for the Georgia Tech Athletic Association.

First and foremost, new head coach Geoff Collins is fired up about the prospect of playing in Mercedes-Benz Stadium. He attended the MLS championship game and Super Bowl LIII at Mercedes-Benz, and he knows that it is a special place that has hosted the NFL, MLS and college football title games in less than two years of operation.

The ’22 game against Clemson will be played on Labor Day evening, and it will be televised nationally, likely as the only college football game in the land that evening. Television details on the other games, including next year’s Nov. 14 game against Notre Dame, remain to be seen.

“The elite players in college football and high school football want to play on the biggest stage, and this affords them that opportunity. It’s guaranteed one game a year they’re going to play in this venue, national TV, great exposure.”

Stansbury also touted the partnership with AMB Group (which includes the Atlanta Falcons, Atlanta United and management of Mercedes-Benz Stadium) and Peach Bowl, Inc. (which runs the Chick-fil-A Kickoff Game) as part of Tech’s ongoing strategy to become a bigger and more recognizable brand in the Atlanta sports landscape.

Based on their previous experience, Stansbury certainly believes that Tech fans will enjoy their once-a-year trip to Mercedes-Benz, but he’s hopeful that the Jackets will attract new customers by playing there.

“This allows us to access Atlanta football fans that may not right now be Georgia Tech fans,” he said. “We really noticed when we did host the United that there were a lot of United fans who had never been on our campus. We jointly will try to fill Mercedes-Benz Stadium.

“It provides us another opportunity to introduce the Georgia Tech product to Atlanta football fans that may have never been to Georgia Tech football before.”

Peach Bowl Inc. CEO and president Gary Stokan credited Tech and Stansbury for their innovative thinking with the goal of growing the Institute’s brand.

“[Stansbury’s] foresight, getting out in front of the Georgia Tech brand in Atlanta and in college football was the impetus behind all this,” Stokan said.

That outside-of-the-box thinking predates the completion of Mercedes-Benz Stadium, because if Tech had not played host to the first five Atlanta United games at Bobby Dodd Stadium in ‘17 while MBS construction was being completed, these games might not be scheduled, according to Steve Cannon.

Cannon is CEO of AMB Group.

“This probably would not have happened had we not had such a great experience at Bobby Dodd, and that opened a doorway as neighbors,” Cannon said. “This really was a win-win as we dug into the conversation.”

Cannon was quick to tout tailgating at Mercedes-Benz, which includes nearly 11 acres of green space immediately north of the stadium in a property known as the Home Depot Back Yard . . . “connected directly by entry doors and escalator (to the stadium) with the backdrop of downtown Atlanta . . . “

Once inside those doors, fans will find a state-of-the-art stadium with 20,000 more seats than Bobby Dodd Stadium and other ultra-modern amenities, including a plethora of premium seating. Which, of course, means the opportunity for additional revenue for Georgia Tech athletics.

Which is why Stansbury also included that the five-game series at MBS “create(s) the opportunity for us to increase revenue for those games.”

“Some of it is just pure arithmetic, and having a much larger stadium does provide that,” he said. “The other thing is that at Bobby Dodd our premium seating is maxed out with waiting lists.

“Here, there is plenty of premium seating to access whether its clubs and loges and different opportunities for people who want those amenities. That does definitely take the arithmetic and move it to calculus.”

While additional revenue is advantageous for a program with eyes on consistently competing for championships in what Stansbury often calls “the toughest neighborhood in all of college football,” the benefits of moving an annual Georgia Tech football game to the gridiron palace that stands nine-tenths of a mile south of campus go way beyond dollars and cents.

“Compliments to [GT deputy A.D.] Mark Rountree, Todd and Coach Collins,” Stokan said. “I think Georgia Tech has done a great job since Todd has come here, and [continued by] Coach Collins, of really breaking through the clutter. This is another example of that – out-of-the-box thinking in a marketplace that’s tough. This is a really good sports marketplace and Georgia Tech’s doing a great job of building a brand.”