Wednesday brought more than a good word for Georgia Tech – running back Jamious Griffin started the stirring by donning a GT ballcap as one of four new student-athletes to sign on with the Yellow Jackets, another transferred in and new head coach Geoff Collins raved. But, at the end of the day, a former player stole the show.

To be sure, the keynote moment on National Signing Day came when new assistant head coach/offensive line coach Brent Key simultaneously opened his mouth and a vein.

First, Tech’s new coaching staff gathered to watch Griffin – the Georgia Gatorade Player of the Year who barely had Tech on his radar before Collins’ hiring – choose the Jackets in a televised event. They whooped. They hollered. They hugged. You can find that all over social media.

But Key was key over and over with a LOT of really good words.

The onetime Tech offensive lineman from Clay, Ala., who spent the last three years coaching the o-line at Alabama to three consecutive national championship games and a title, met media after Collins spoke. Georgia Tech legend Marco Coleman – another new staffer – was by his side.

It started when he was asked about the difference between recruiting for Georgia Tech vs. against.

The blood of a Tech man practically spilled on the table over which Key sweated. With his voice rising and his pace quickening, he locked onto what has long separated Tech and how it should be turned to advantage. At times, he was wordy. He was always passionate.

“I am so fond of this place, and knowing what the place is, it almost sounded like that was a negative [question about what] people would say [recruiting against Tech],” Key said.  “I mean hell, this place is the most special place in the world. To be able to sit here and say that anybody would say anything negative or negative about it, hell, everything goes on in recruiting. I mean recruiting is a war . . .

“People are going to have words and say things, but you know what? I went through this place. This place made me who I am TO-DAY! I know the truth about this place. Somebody’s asked me: how are you going to recruit to Georgia Tech different than you were at Alabama? I said, ‘[expletive]! It’s going to be easier. It’s going to be so much easier.

“So, I don’t know if that answered your question. You got me fired up a little bit, but I think you can tell how happy I am to be here.”

And with that opening, Key confirmed a roll.

VIDEO: Brent Key on returning to his alma mater

Within minutes of his December return to The Flats, Collins traveled to Rome, Ga., to visit Griffin, a 5-foot-10, 210-pound guy who last season rushed for 2,815 yards and 38 touchdowns on 288 carries.

The young man was previously committed to NC State, yet several programs continued to actively recruit him.

And before Collins had even hired one person to his staff, he made his only NCAA-allowable off-campus visit to Griffin ASAP.

A few weeks later, once another recruiting window opened, multiple new Tech coaches – including former running back Tashard Choice — knocked on the door of the Griffin family’s door one minute after a midnight deadline broke. And a week or so ago, eight Tech assistants visited the Griffins again – all at once.

So, when the young man put on a Georgia Tech hat with local television stations filming on Wednesday morning, Collins’ crew started jumping around before the big screen.

“It was huge,” Coleman said. “Jamious is a phenomenal player, and it also set the tone for that’s where we’re going with this. There’s going to be more of those.” 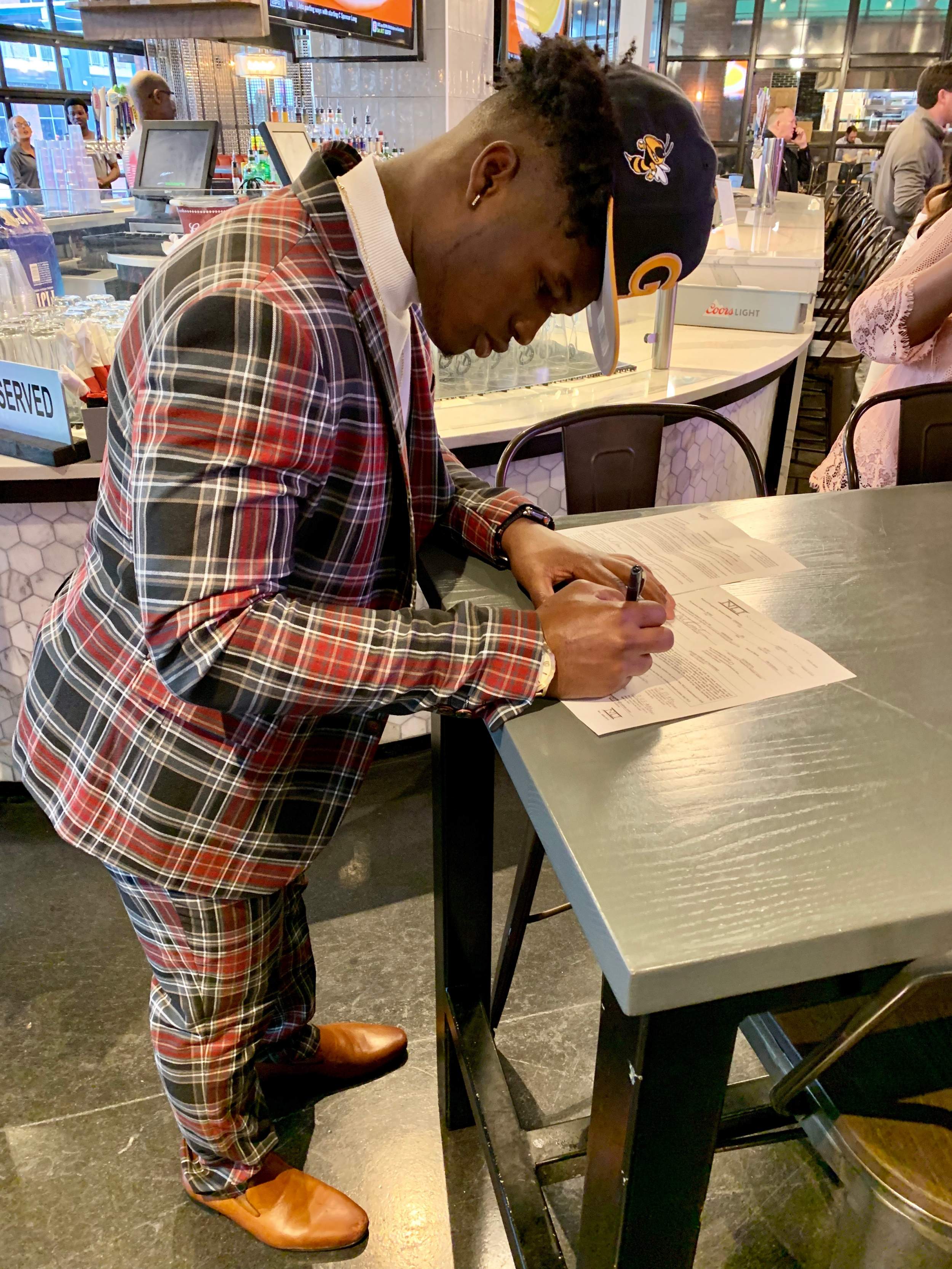 All of this lines up behind Collins, who has been a blur since he was hired from Temple in the wake of Paul Johnson’s retirement.

The Atlanta-area native who twice previously worked at Georgia Tech trumps Tech as a destination like he might beat a drum.

He doesn’t run from the academic rigor as a recruiting deterrent. “I see everything that exists with this great institution as an advantage,” Collins said recently. “Because the elite players that I’ve ever coached . . . want to be great in every phase of their life.”

Collins had good things to say about Tech’s new players, and he made a point to credit all of his assistant coaches and staff members who were engines in recruiting, chiefly the general manager and brand manager.

They’re the men who scheduled recruiting trips and social media.

“Patrick Suddes … organizing the midnight madness events, organizing the staff getting all over the country to see these great players that we were able sign.

“Santino Stancato … has done a great job engaging our fan base, engaging the former players, engaging the recruits for this class and many classes to come.”

However, despite the warranted excitement for the signing class and the confirmation that spring football and all it entails are right around the corner, the bottom line from Wednesday is that the Jackets won and Key was front and center. Later in his address, he appeared offended yet again when asked why he left the high tower of Alabama to return to Georgia Tech.

And he pounded his fist on the table while doing it.

“It’s home, and I can guarantee you this: when we’re done changing the culture under the vision of what Coach Collins wants to do, no one will ever ask that question again,” Key said. “It’s real, guys . . . I get more energy walking out on that field right there than I do walking in front of 110,000 people anywhere else.”