#TGW: Getting It Wright

Moses Wright has always been good around the net.

It’s just that for most of his early life growing up in Raleigh, N.C., and even for a year at William G. Enloe High School, the net he was good around was on the tennis court.

Wright might still be slamming tennis balls were it not for a four-inch, 40-pound growth spurt following his sophomore year at Enloe. After that, he changed his opinion about basketball and traded overhead slams for slam dunks. Wright led the Eagles with 22.0 points, 11.0 rebounds, 2.0 blocks and even a 41.0 three-point shooting percentage.

“It did (change my mind),” he said. “Especially since my coach told me that I could be great. They saw that leap and it was like, ‘Yeah, he could be special.’”

Moses continues making leaps and is still hearing from his coach that he can be special, only now it’s from Georgia Tech coach Josh Pastner. After finding his way through a freshman year where he played 25 games, starting 10 of them, including the final five, and a sophomore year, where he continued to improve and ended with a flourish, Wright has found his way into the starting lineup, into a role on both ends of the floor and into Pastner’s blueprint for future success.

His improved work around the basket has been the nicest development.

“What he’s done well is he’s kept a lot of balls alive and he’s finished,” Pastner said. “Where last year he would maybe get an offensive rebound, but he wouldn’t finish, now he’s finishing around the basket.

“That’s why I’m on him all the time, ‘Keep attacking,’” Pastner continued. “He’s really good around the paint. He’s (shooting) in the high 70s. Obviously, he hasn’t shot well from three, he hasn’t shot well from other areas, but in the paint he’s 70-some odd percent. He’s got a couple of 12-footers in there, jump-hooks. It’s anything in the paint. He’s finished better around the hoop, where last year he wasn’t doing that. What has taken him down a lot is he’s shooting other shots that maybe aren’t his strength, and I’m on him about that all the time. ‘You really haven’t been stopped in the paint yet based on your numbers.’”

Wright’s hard work in the paint is making things easier.

“Offensive rebounds are easy points,” said the 6-9, 217-pounder, with the 72-inch wingspan. “Easy points for others, too, easy kickouts. Crashing the boards just makes everything easier.”

The numbers and milestones nice but Wright doesn’t gauge his game by numbers.

“Honestly, I really don’t like to go back and look at my stats from the game,” he said. “I can just tell if I left it all on the floor or not. It doesn’t matter how many points I scored. It’s the way I feel after the game.”

His teammates feel really good about this Moses Wright.

“Moses is playing really well, he’s playing high-level,” said sophomore point guard Jose Alvarado. “It’s not shocking, because we see how good he can be. It’s about mindset and just having fun with the game, and that’s what he’s doing now. He’s going to be very good for us. He’s playing with a high confidence, and he’s playing how he should be playing. I’m glad he is.”

Wright made 20 starts in 2018-19, including a stretch of 14 in 15 games between Nov. 16, 2018 against East Carolina and Jan. 19, 2019 against Louisville, but he never really found any consistency — he scored in double-figures three times, but also went scoreless twice. Then came sporadic minutes over the next six games before the noticeably different season-ending charge.

Those six games coming off the bench proved to be his awakening.

“When Coach wasn’t playing me, I was like, ‘Something has to change,’” he said. “So I started changing my energy, and then I saw better results. Coach Pastner always tells me I’m at my greatest when I have a whole bunch of energy. He’s right.

“Just bring energy, no matter how I feel, and don’t let my personal feelings impact other’s performances and my performance,” he added. “I can be such a great energy-giver sometimes, hyping everybody up. Sometimes I can be, like, dead and no energy and bringing everybody down with me. I’ve been having more of a fun approach, a fun mindset. It’s still serious, but know when to flip the switch.” 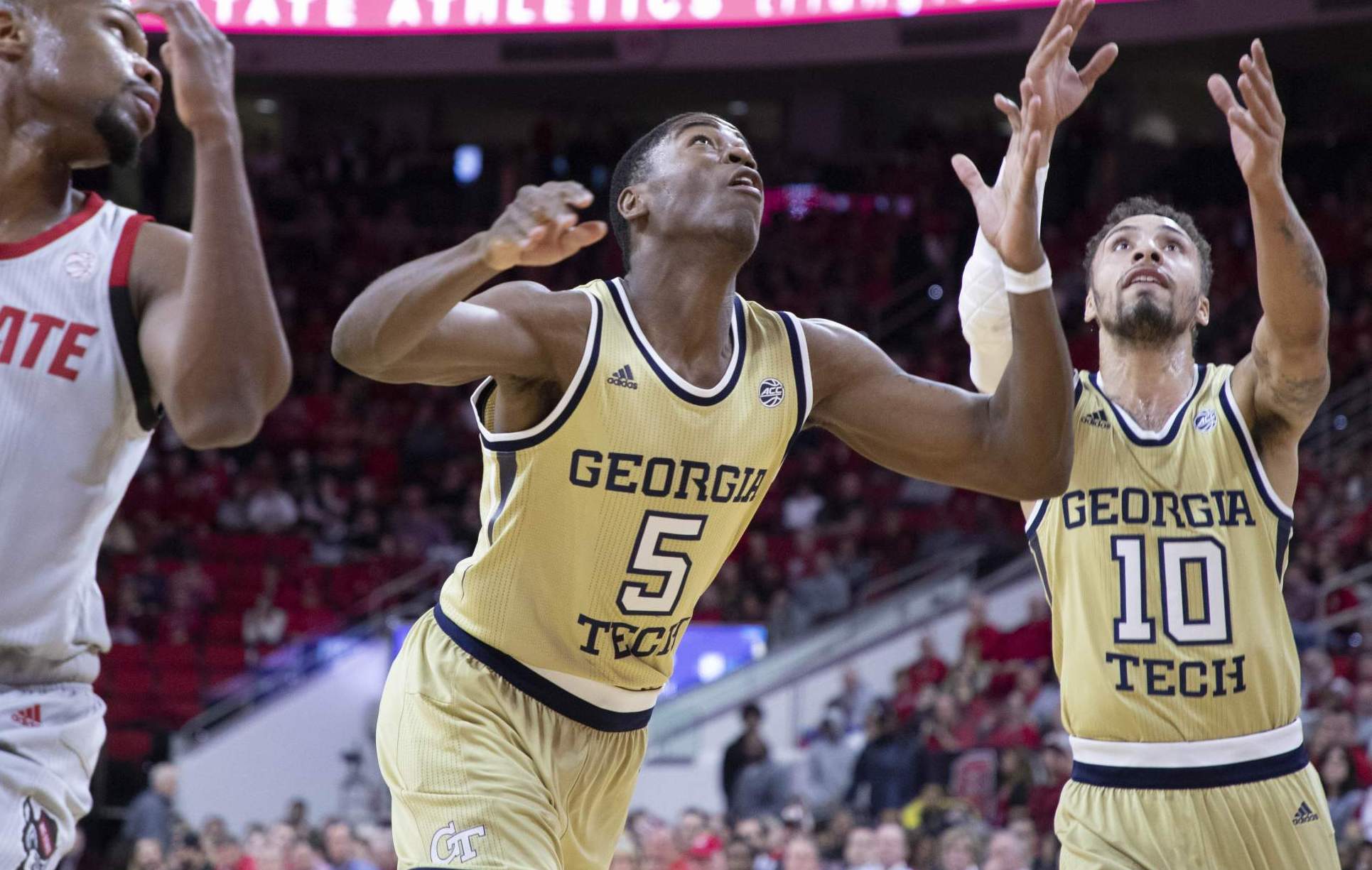 Playing for the first time in his hometown of Raleigh, Wright scored 18 points with eight rebounds at NC State.

He didn’t need anyone to tell him to flip the switch Wednesday night at NC State. He was on a mission in his return to Raleigh.

“This definitely isn’t a road game I want to lose,” he said earlier in the week. “I want to go back to Raleigh, because NC State really didn’t recruit me. So I want to say something about, ‘This is why you should have recruited me.’”

He did just that. Wright helped Georgia Tech pull out a heart-pounding 63-61 victory, playing 39 minutes, and just missing his first career double-double, going for 18 points and eight rebounds, with two blocks. The 18 points were one off his career-high and more than any Wolfpack player, while his eight boards were one off the James Banks’ game-high and matched his career-best, set twice last season. Wright shot 7-for-11, and even hit Tech’s only three-point field goal.

As Moses prepares for ACCs, it’s clear that he has seen the light.

“I want to say it wasn’t really a light. I would say it was my teammates pushing me, knowing I could be better,” he said. “So I guess my teammates are the light, there. Knowing that my teammates have my back is huge. If I make a bad play and Coach is yelling at me, Jose will bring me in and tell me, ‘It’s straight. Make the next play.’”

He’s making plays, especially around the rim. He’s become such a solid rim-protector — his two blocks against the Wolfpack gave him two multi-block games in the last five and his 17 on the season rank him third on the squad — that his teammates have come to expect big defensive plays from him.

“He tells us every game that he’s going to get a big block,” Alvarado said, with a laugh. “That’s what he always tries to do, get the bigtime block.”

The next step in improving his game outside the paint. Wright’s shooting 20.8 percent from behind the arc (5-for-24), thanks to the three he made in Raleigh, and 12.7 career (7-for-55), but Pastner feels that number’s not necessarily indicative.

“He doesn’t have a funky-looking shot,” said Pastner. “It’s a nice-looking shot. It just hasn’t gone in. He’s just going to have to grind it away through repetition.”

Alvarado is on board in helping Wright in that aspect.

“I told him after this season, we’re going to work on his jump shot,” he said. “He could be a high, high-level player. He’s 6-9 with a wingspan that’s unbelievable. He’s going to come back and be a big problem for us and help us in every way he can.

“I told him, ‘Your life can change in a year if you just put the work and time in,’” he added. “Because he’s got that type of body and athleticism for everything.”

Wright’s excited to be part of a team that has a chance to be really good as well.

“(Pastner) tells us that all the time,” he said. “He always tells us that we’re just steps away from being a great team, and for us to actually be that great team takes consistency in play. I feel like there are always doubters there, but you always have to prove them wrong.”