THE FLATS — Competitors love to compete.

For members of Georgia Tech Swimming and Diving, that love drives them. It gets them up early in the morning and to the pool. It gets them to do one more lap or one more rep.

The ultimate payoff is getting to showcase how all that hard work pays off during what Toni M. and Richard L. Bergmark Swimming and Diving head coach Courtney Hart calls “Championship Season.” The centerpieces are ACC and NCAA Championships.

Due to unforeseeable circumstances, the latter did not happen in response to the worldwide COVID-19 pandemic, which has pretty much ground the entire world — and the sports world — to a halt.

No, NCAA Tournament may seem like a small price to pay on the grand scale but for the student-athletes, it’s heartbreak, depriving these competitors one final chance to write a final chapter to the season. Senior swimmer Emily Ilgenfritz, juniors Caio Pumputis, Christian Ferraro, and sophomore Kyle Barone and junior diver Camryn Hidalgo, experienced that heartbreak as they — nor anyone — will get to compete in the NCAA Championships, which had been scheduled for Indianapolis, June 14-21.

It’s a sad ending for them and the entire 2019-20 team but can’t erase a memorable regular season. 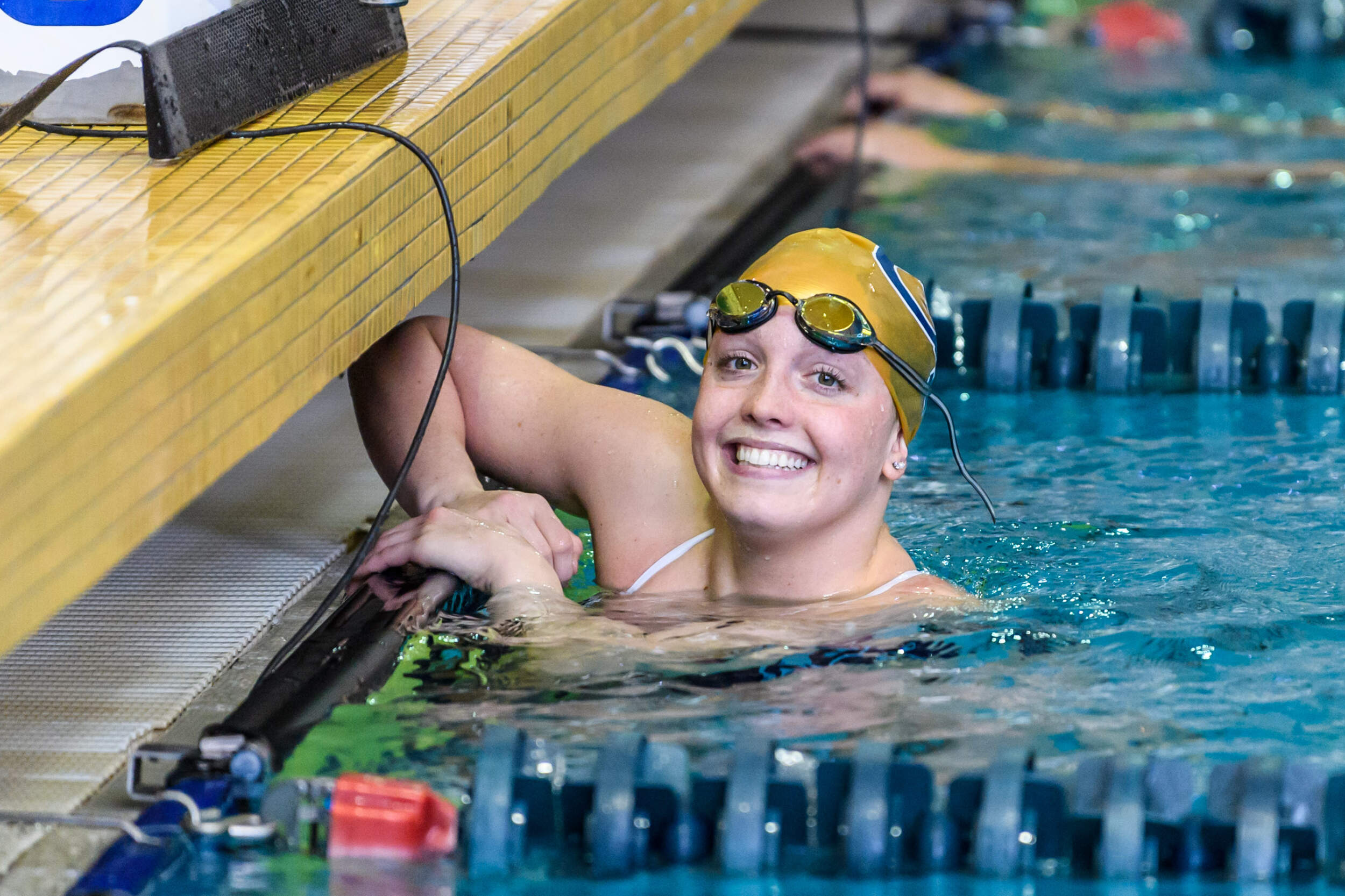 Emily Ilgenfritz: I’m Free To Do What I Want…

“I was very relaxed and very focused on making the most of my last Invite and staying in the moment and enjoying my teammates because senior year goes by fast,” said Ilgenfritz, who re-set her own school records in the 500 and 1,650 as well as setting a new record in the 1,000. “I’ll definitely remember when I had a breakthrough 500 freestyle and seeing all my teammates on the side cheering and seeing them at the end of my lane when I finished.”

Emily will receive her degree in Business Administration in May and, while she’s not counting out the 2021 Olympic Trials, she definitely plans to start work for IBM at the Research Triangle Park branch in July. She’s proud of her and the team’s transformation since her arrival on campus in 2016.

“Coming into college I was a 4:52 500 freestyler and that was not really competitive in the ACC or in the NCAA,” she said. “I’ve achieved some results that I never thought that I would in my college career and that is incredible but I hope my teammates remember me for being a good teammate and a good friend.

“Over the years I’ve watched the team grow closer each year. We’ve improved our vision and increased accountability with each other,” she added. “I’ve seen our performance in practice improve, which has directly translated to meets.” 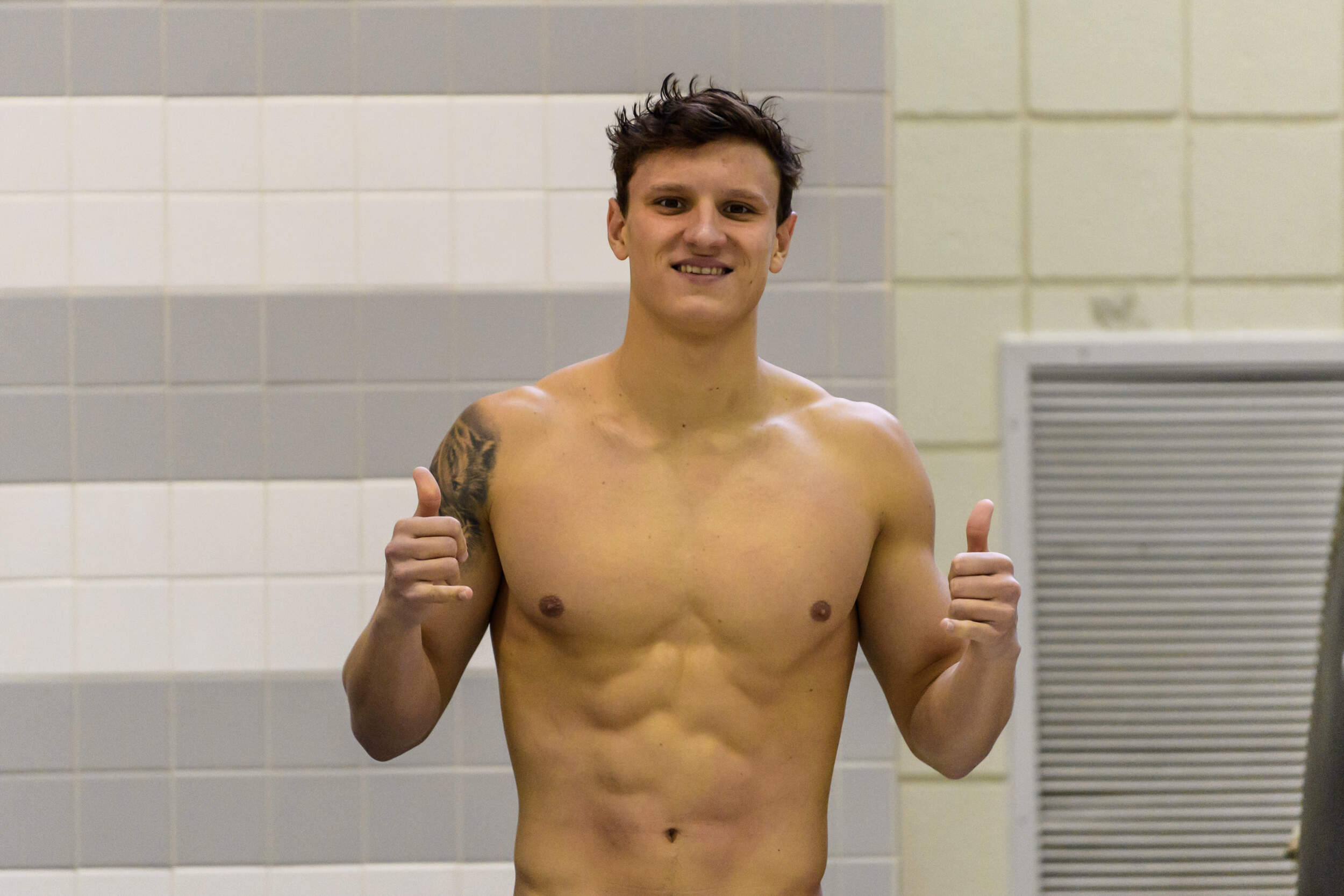 Still the sudden stoppage left him devoid of a proper finish.

“I don’t think I have a highlight this year. I’d say my highlight would be NCs but it didn’t happen,” said, Pumputis, who is still in Atlanta, with a laugh. “We did well at ACCs but I was getting ready to swim at the NCAA meet, me and Christian. It was sad the season ended up like that. We didn’t have the chance to show our best.”

Pumputis, who already holds school records in the 100 and 200 breast and 200 IM as well as the 800 free and 200 and 400 medley relays is looking to next year, when things return to normal and relay mates Ferraro and Barone return to school. He likes the entire squad’s outlook.

“I think we’re improving a lot. The new coaches are doing a great job and the team is taking swimming more seriously,” he said. “I think everyone wants to make the NCAA cut, to swim at ACCs, to be among the fastest in the country. For next year I’m looking for a stronger team.”

He’ll have the similar full plate and same carrot — Brazil Olympic Trials and Tokyo Olympics — at the end, only this time it’ll be his final go-round.

“It’s really important to have a great year my senior year. I want to swim fast and write my name as one of the best swimmers at Georgia Tech,” he said. “With the Olympics getting postponed, everyone has one more year to practice and one more year to improve. It means a lot to me. I know I’m on the right path so I’m going to keep working hard and trying to swim fast.” 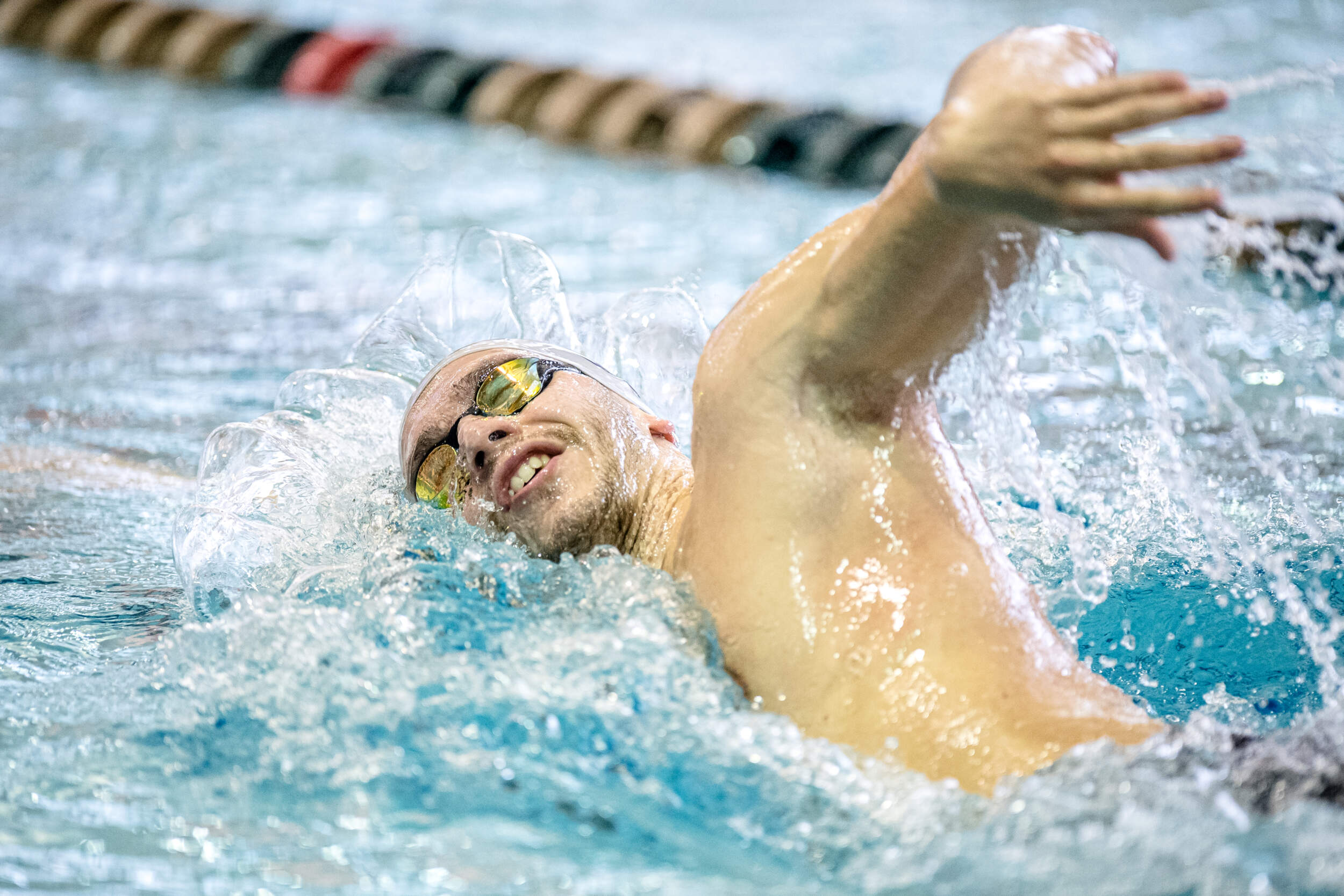 Christian Ferraro: Resolving the Conflict…Sort Of

Like Pumputis, Christian Ferraro came into the ‘19-20 season with the conflict of college swimming and Olympic trials for his native Italy. He managed to put the latter on the back-burner.

He also had a mission to put his sophomore season, short-circuited by a bout with mononucleosis, behind him.

“I just wanted to see how much I improved this year because I remember I got mononucleosis in January so I was still trying to catch up and recover from that,” said Ferraro, from his home in Altivole, Italy. “This year, I was swimming well from the very beginning of the season. All the effort that I put in for the whole season I wanted to see the results that I got from that but I didn’t have the opportunity because of the coronavirus.”

“Yes and no at the same time,” he said. “It’s not just me but everybody got in this situation. I can’t complain that much. I couldn’t compete. That’s the main part that makes me sad.

Ferraro is anything but sad about the coming year, as not only will he get stronger in his attempt to make it to the Olympics, but also to continue to excel in the multiple relays he does at Georgia Tech. He was part of 15 top-five times in the 200, 400 and 800 free and 200 and 400 medley relays. The continuity with his returning relay mates has him pumped.

“Me, Caio and Kyle are swimming the relays so that gives us a much higher shot to qualify again in the 200 medley and the medley relay,” he said. “Next year we can really do great things, especially in the 200 relay.”

Until then and until quarantine is ended, he’ll settle for just keeping in touch on group chats on ‘GroupMe.’ 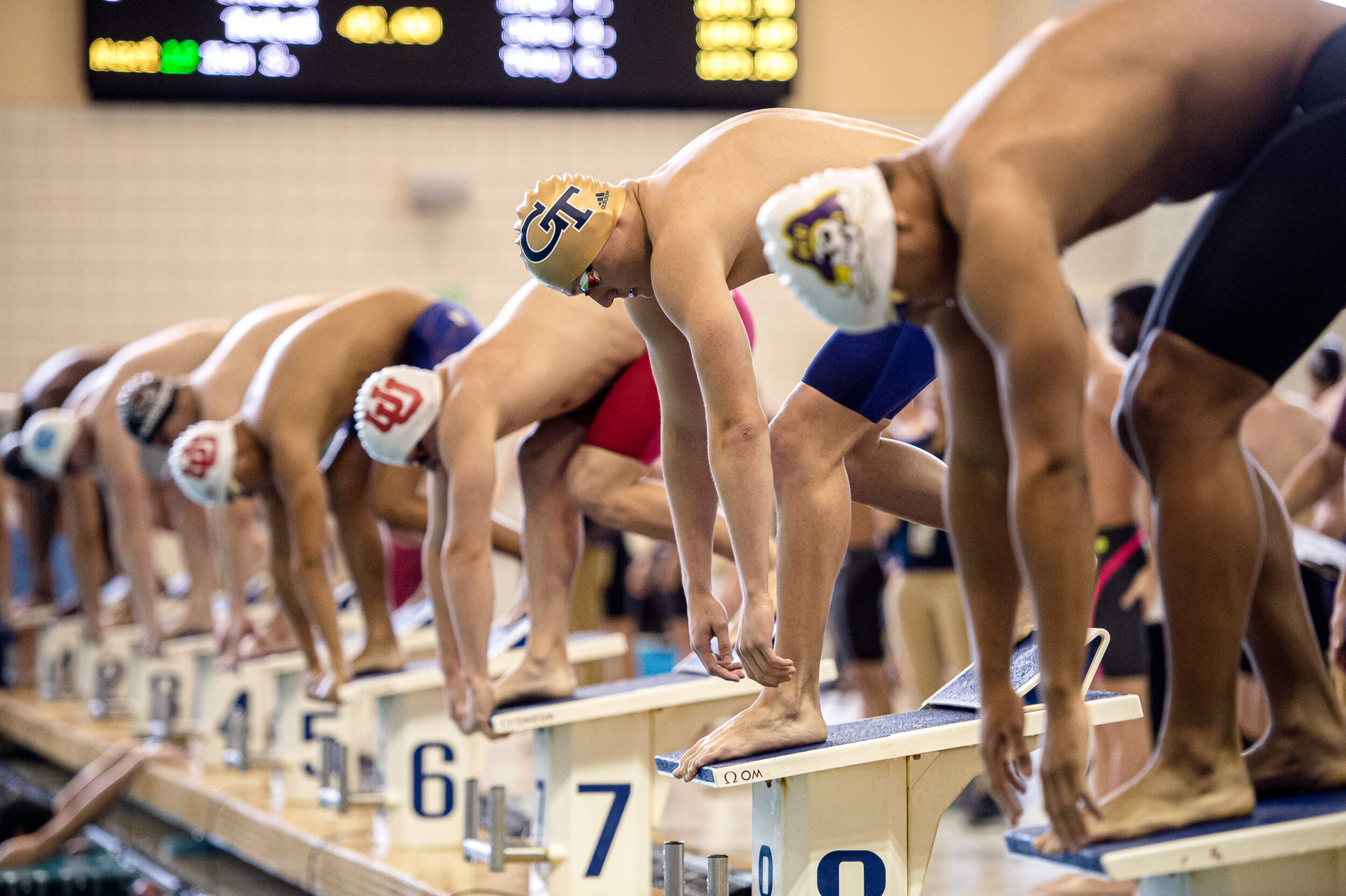 The baby of the NCAA swimming All-Americans/qualifiers, sophomore Kyle Barone did more than take baby steps in 2020.

The sophomore from Cornelius, N.C., where he’s currently working out and group-chatting with teammates, was named All-America in the 100 back after his 45.77 at ACCs, and would have earned a shot at 100 fly (46.25, also at ACCs).

“It definitely feels a little bit different in how I got it but that was definitely something I was really striving for going into NCAAs,” he said. “I knew I wanted that top 16, that All-American. So to finally receive it — granted it was under different circumstances — was really just a blast.”

“It was my first time being on a relay at a conference meet. So getting up for the first night and doing the 200 medley relay, I was sitting up there and the energy just kind of JUMPED once it turned into our heat,” he said. “I never really experienced anything like that. That killed the nerves a little bit so I didn’t really have as much nervousness but really enjoyed it. I was just enjoying the whole atmosphere, enjoying the high energy, the high-intensity atmosphere.”

ACCs was the culmination of a mission to improve that started the summer before.

“A big part of my season was I did stay last summer in Atlanta to train,” he said. “One of the biggest differences in all that hard work was I did put a lot of work in improving my technique and my stroke above water. Also a big part of that hard work was focusing and training underwater a whole lot more and just having intensity day to day with that.”

“I’ve definitely gotten a lot closer with Caio and Christian through this whole process of kind of reaching that whole other level,” he said, also giving props to former Jacket Rodrigo Correia, who practiced with the team and served as a mentor. “It’s definitely a huge excitement for them to be coming back for us to kind of lead and hopefully bring more kids next year to NCAAs.” 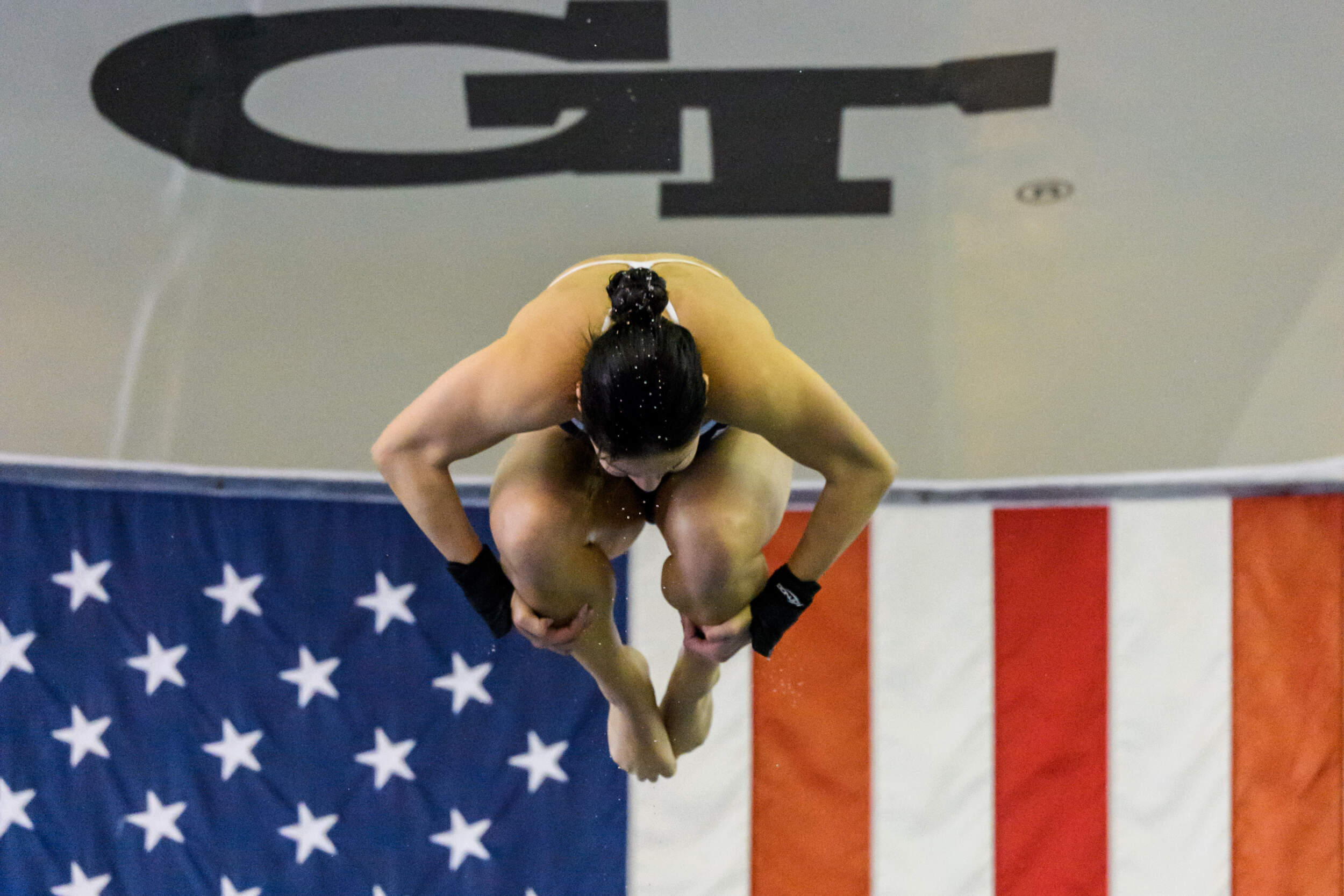 Camryn Hidalgo may be the feel-good story of Georgia Tech’s Diving Team. Determined to come back and compete despite missing much of the season, Hidalgo won the 1 meter and finished second in the platform at ACCs. Then, having to prove herself all over again at Zone B Qualifying, she finished sixth in the 1-meter, eighth at 3-meters and third on the platform at Zone B qualifiers. Her platform performance earned a bid to 2020 U.S. Olympic Team Trials.

“It was really exciting,” said the Mission Viejo, Calif., native, who’d missed postseason due to a concussion sustained at ACCs as a freshman, then just missed nationals as a sophomore. “I didn’t have super-high expectations just because I know there are a lot of good girls in our zone. I just wanted to do well. I think starting off with 1-meter, which is one of my really solid events, was really nice because if you make it on one board then you only have to get top 12 on the other boards, which is really calming and relaxing. So to start off the meet on a good foot set the rest of my competition up well because I was more calm and not as nervous.”

Hidalgo now plays the waiting game until NCAA Diving All-America honors are announced but regardless of how that turns out, she was pleased with the steps she and the entire team made last season.

“We got two really great new coaches and the energy around the pool has been amazing, and we really, really, really loved our freshman class this year,” she said. “The team environment has been absolutely amazing and these freshmen have a big part of that. They’re all so eager to learn, they’re super-excited, and they got along with everyone on the team. I think having this freshman class really changed how our season ended.”

Hidalgo, who Coach Hart describes as “the epitome of resilience,” admitted it was sad to see the seniors leave.

“It’s always so sad seeing our seniors leave. It’ll be different not having them on the deck. They worked really hard this season,” she said. “To see them finish off really well was absolutely amazing. They worked so hard and they deserved everything that they got.”

Until next season, she’ll be self-motivated while working out at home.

“I’ve been writing myself workouts, which is really hard,” she said, with a laugh. “I actually make time-lapse videos of myself and I’ll send them to my friends to kind of keep myself in check. So they’ll make sure I’m working out every day. That’s how I’m staying motivated.”

Hart is already motivated to build on this past season.

“We’re always planning, we’re always building. We always are hungry for more and to have this group back to continue us in that direction is super-exciting,” she said. “Our goal right now is to keep people engaged and motivated in this kind of unusual time. I miss everybody. I understand why and certainly support why but I miss everybody and that doesn’t change. I’m excited when we can get back to work and get going.”

Another year of Olympic trials at the end of the season also has her juices flowing.

“The more the merrier in THAT category,” said Hart, a two-time Olympic gold medalist. “I know what it’s like to be there. It is an AMAZING event, amazing to get to represent your country and so I’m excited to help people prepare for the Olympic Games again next year. I’m glad they didn’t cancel it because that would have been devastating.”