Back on the launch pad last Saturday, Anthony Morrow found himself a bit off the mark, which was unusual for one of the greatest basketball shooters that Georgia Tech’s ever seen.

Yet the modest man from Charlotte has never been particularly comfortable in spotlights, perhaps because he’s never been considered a headliner. That made this all the more amazing.

So, before he was to sign autographs prior to the Yellow Jackets’ game against Louisville and then be honored on the floor at McCamish Pavilion, the 6-foot-5 shooting guard who so often dead-eyed it for Tech from 2004-08 was quite happy while at the same time sort of miffed.

“I still can’t really believe it. I’ve been thinking about it since they told me last couple weeks, so for me it’s a blessing, obviously,” he said in a few moments of reflection before the game. “I’m always humble, but this is a very humbling experience to have the school acknowledge me.”

The world has changed several times for Morrow, 33, and not just since he left the NBA after the 2016-17 season following nine seasons with the Warriors, Nets, Hawks, Mavericks, Pelicans, Thunder and Bulls.

He went undrafted out of Tech in 2008, made the Warriors roster, and that year set an NBA record for rookies by scoring 37 points in his first start. He also became the first – and still only – rookie to lead the league in 3-point shooting with a mark of 46.7 percent.

He’s made it work, and so after grossing more than $24 million in the NBA, mostly from the Nets and Thunder, A-Mo drove from his hometown of Charlotte, where he and his fiancé live with three young boys, to Atlanta, where his 10-year-old daughter lives with her mother.

There was time to reflect with amazement. 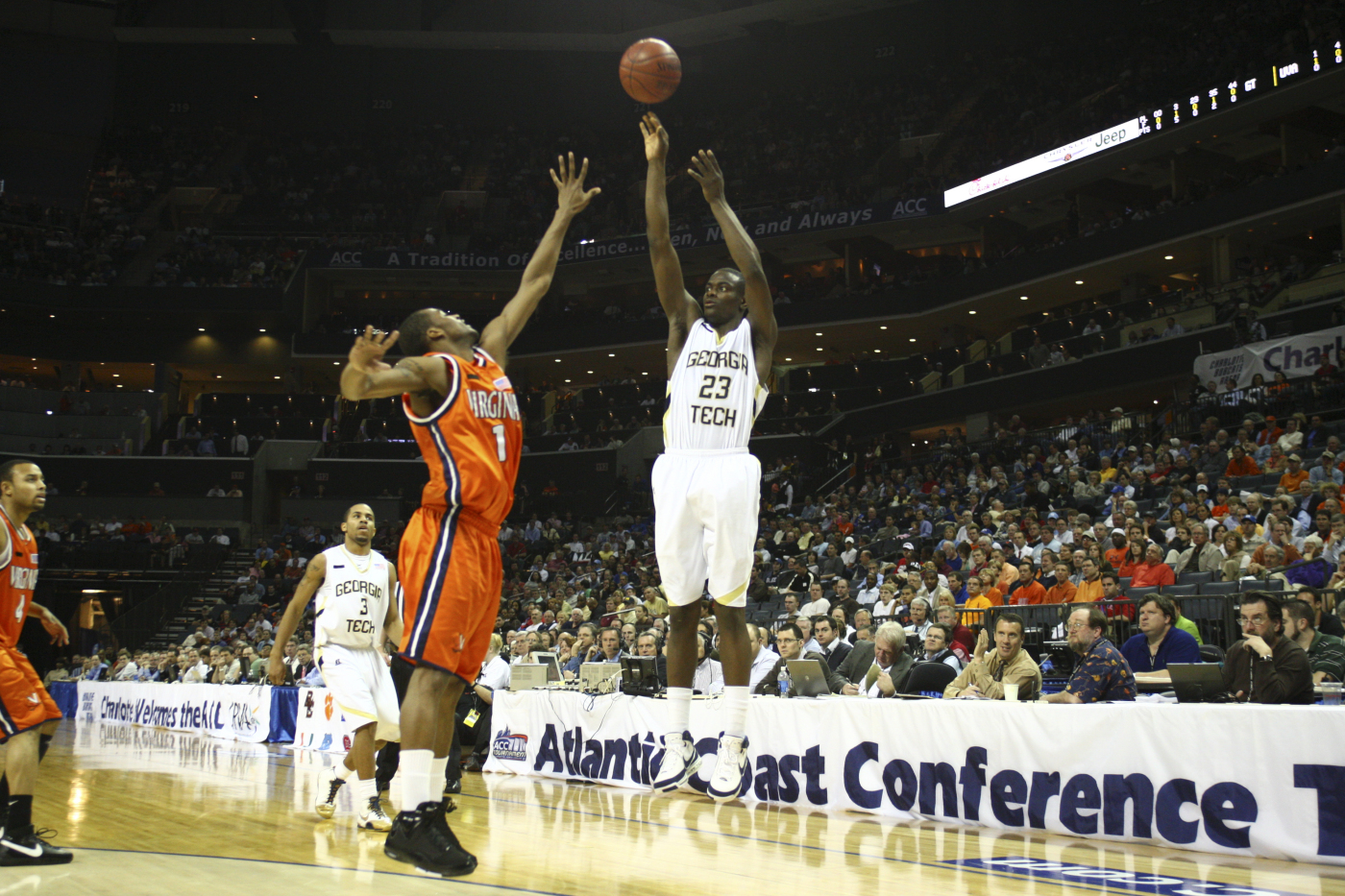 “Not playing, it’s kind of like taking a deep breath,” Morrow said. “I made enough money to be comfortable, the kids are straight, family is straight … so, it’s cool. It’s weird, but it’s cool.”

When he first arrived on The Flats, Morrow was an attachment to a team coming off a loss to UConn in the national championship game and replete with guards Jarrett Jack and Will Bynum, who remain fantastic friends, and B.J. Elder.

“Yeah, it’s crazy because Jarrett and Will came to Charlotte to hang out with me last weekend, and just all those stories we were telling about college, and practices and little stuff that only we remember,” he recalled. “A lot of stuff started coming back.”

Always a shooter, Morrow wasn’t especially highly regarded out of Latin High School, but he wasn’t intimidated, either. He was respectfully eager to play for coach Paul Hewitt.

“Once I realized I wasn’t going to go to UNC-Charlotte, I saw the success that those guys had at Georgia Tech, and I wasn’t coming in thinking I’m going to come right in and play,” he said. “I was thinking if they come back, I’m going to learn from five or six pros at my position, and I’m only going to get better playing against them.

“I wanted to come in and prove myself against those guys, and I think doing that built the work ethic to another level.”

Averaging less than 13 minutes off the bench as a freshman, Morrow took more than twice as many 3-point shots as shots from inside the arc, and his 42.9 percent success rate in ACC games led the league. He also led the ACC in 3-point shooting in conference games as a senior (44.8).

“We didn’t have a great year my freshman year. We had some injuries, obviously,” he recalled. “I remember feeling like the game was slowing down.  I felt like I understood what it took, but that’s over with and what are we doing today in practice? I was always afraid to have a bad practice or a bad game, because I didn’t want coach to think I was inconsistent.”

Morrow averaged 16 points a game as a sophomore, when he was front and center in the offense, and then battled a stress fracture in his back as a junior. He hit his stride again as a senior, yet went undrafted.

After a short spell in the NBA’s Orlando summer league with the Miami franchise, Golden State head coach Don Nelson hired him for a look-see in two summer leagues in Las Vegas and Salt Lake City.

“I didn’t really talk to him until like the fourth day, but what he told me was, ‘If you don’t shoot when you’re open, you’re coming out,’” Morrow remembered. 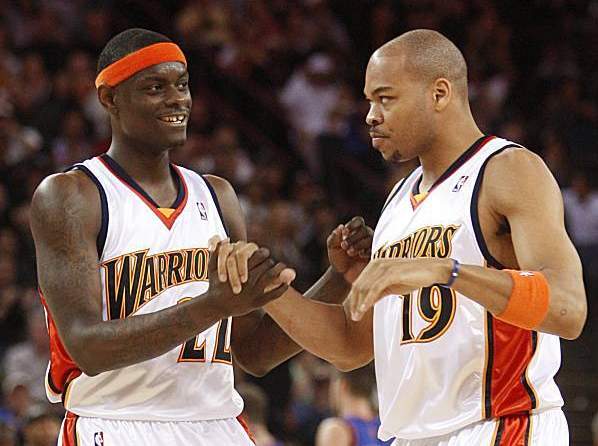 Morrow led the NBA in three-point percentage as a rookie.

There are other NBA memories, good and bad.

“Individually, definitely my rookie year, breaking the undrafted scoring record with 37 points, 11 rebounds. The next summer I had a record 47 points. Leading the NBA in 3-point shooting percentage, the only rookie ever to do that,” he recalled.

There are still plenty of ties that bind Morrow to Georgia Tech. He stays in touch with, “Jarrett, Will, Mario [West], Ra’Sean [Dickey], Zam [Frederick], Jeremis [Smith] and Iman [Shumpert]” and Hewitt among others.

And he stays busy.

First, there are his children. Plus, he’s become more active with Anthony Morrow Charities, a non-profit that he founded in Charlotte in 2013 to aid under-served families and children in his hometown.

“When I was playing, I didn’t have the resources I have now. I would have like two events. I ran the Pro-Am basketball league in Charlotte, and I’d have a block party for kids, like a cookout . . . I’d bring the kids stuff. It started out with book bags, school supplies, hygiene products,” he said. “It just kept getting bigger and bigger to where we had to move it to a rec center down the street behind where I grew up.

“I’ve got time for it now. That’s kind of been the cool part of transitioning. I haven’t officially retired, but just being there and not just having my name attached to it, a lot of stuff is getting done faster.”

He’s not an old man yet, and Morrow stays in shape. He might play again, but it would take the right kind of offer. He’s almost certainly not going overseas to play ball.

The kids aren’t the only thing that chew up his time.

He started a clothing company – ownsenseofstyle.com – last summer, and he does a periodic podcast with Justin Jack, Jarrett’s younger brother.

“It’s fun. We do that anyway ever since I’ve known him. We’ll talk about anything: sports, pop culture, movies, whatever’s going on,” Morrow said. “We’re kind of spotty because I’m in Charlotte and he’s [in Atlanta]. We do it when we can. We’ve got to get more consistent because we’re starting to get some traction.”